The conclusion we can draw from these actions are:

The amount of tightening discounted in the market has increased substantially just over the past week, except in Japan. 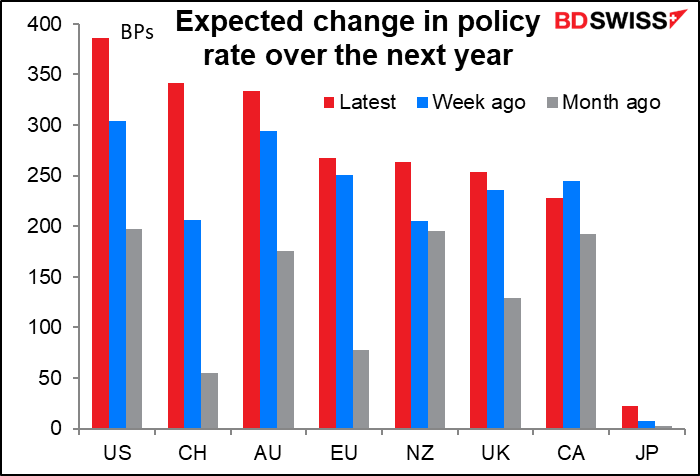 The biggest change over the last week was for Switzerland. Only Canada saw its expected rate hikes decrease. 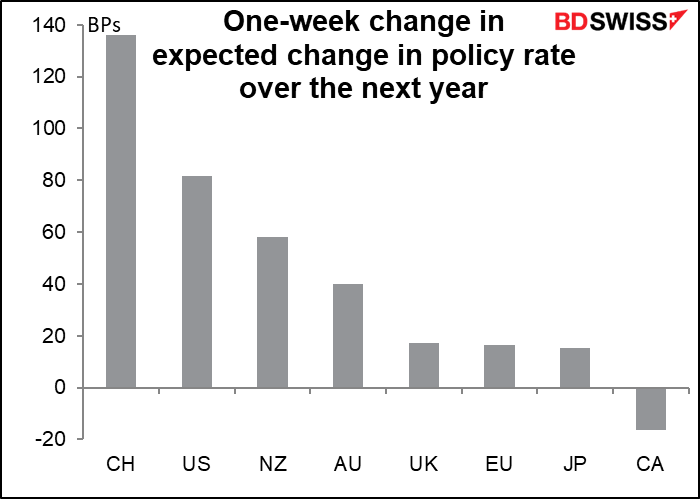 This change in expectations had a lot to do with how currencies behaved this past week. 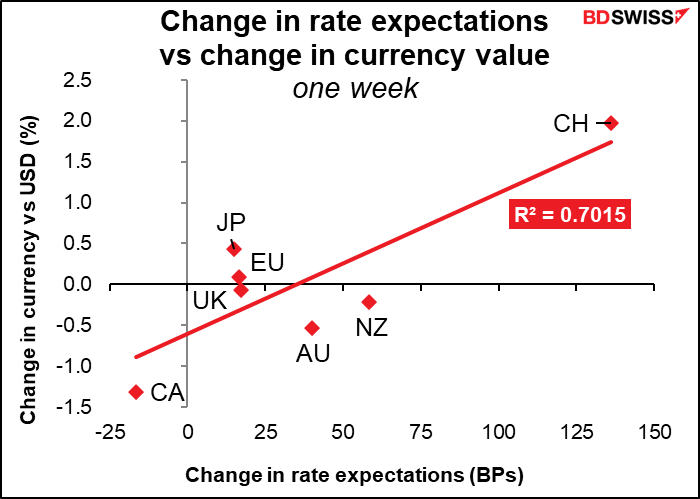 Why the decline in rate expectations for CAD? And why the fall in the currency today? Probably because of declining inflation expectations. Several Canadian banks Wednesday upped their forecast for the Bank of Canada’s July 13th meeting to a 75 bps hike from a 50 bps. Usually this might be expected to boost the currency but now it looks like the market is worried the tightening is going to tip the Canadian economy into recession. Longer-term inflation expectations have receded accordingly.

Canadian inflation expectations have come down across the forecast horizon. 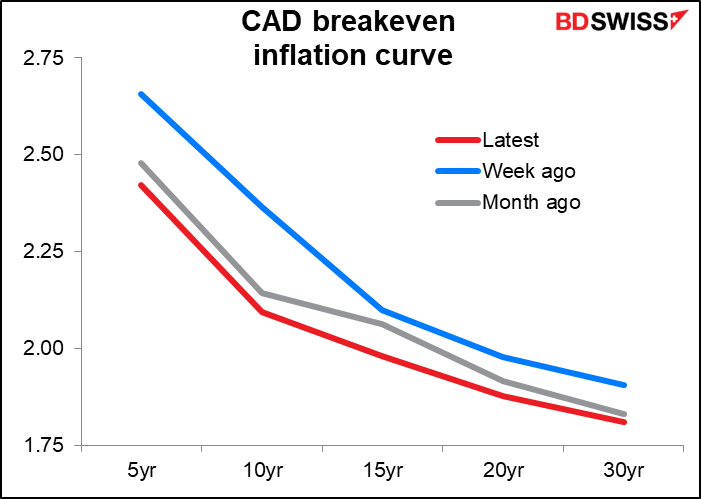 Some of the same fears are active in the US, too. On Wednesday markets were encouraged by Fed Chair Powell’s comment that 75 bps hikes would not be “common,” but on Thursday the market reevaluated the likely path of US rates. Investors speculated that perhaps they underestimated the amount of tightening that would be necessary this year. On the other hand the expected result of that tightening would be more of a slowdown in the US economy next year and therefore less need for tightening then. This possibility weighed on USD yesterday, with the huge miss in housing starts and building permits (see table above) as a sign that the Fed’s tightening is already causing the economy to slow. 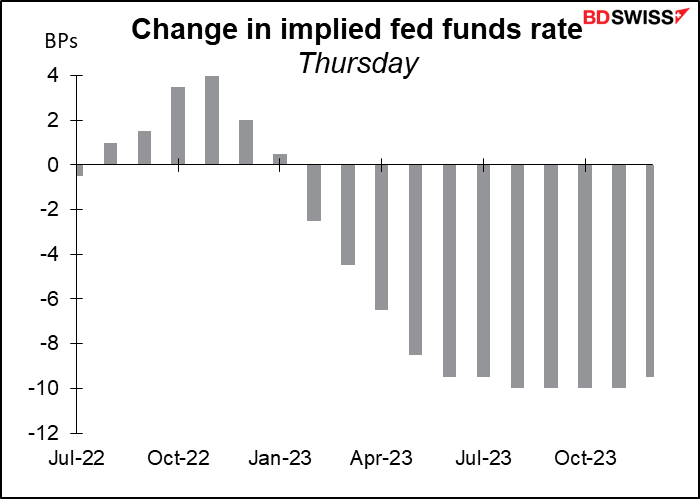 I think this was the theme in the markets yesterday: that central banks are going to have to tighten more than perhaps investors had assumed and that spells trouble for economies further down the line. That likelihood is depressing stock markets around the world. 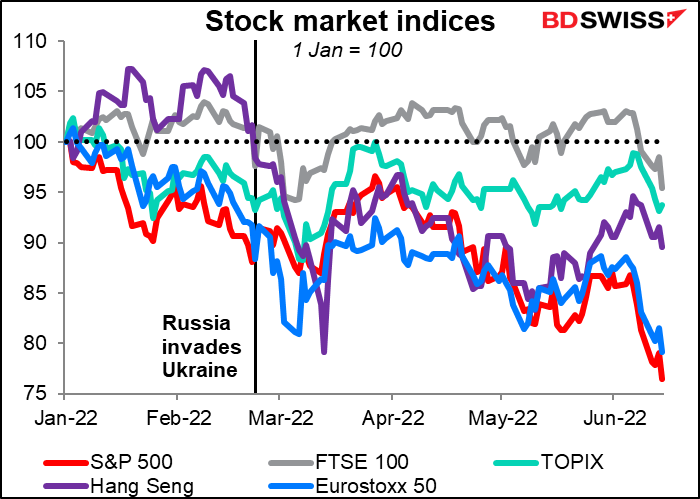 But even more important…

Forget about the markets. There’s more important stuff. Read this: Wow…after a real busy week, finally a quiet day (at least in terms of the schedule).

The UK Office of National Statistics yesterday announced that the UK retail sales that were supposed to be released this morning have been postponed until next Friday.

The major point in the European morning will be the final EU-wide CPI. Germany’s on Monday wasn’t revised, France Wednesday the mom was revised up 10 bps but the yoy figure wasn’t revised, nor was Italy’s.

In the US morning, Fed Chair Powell will make some welcoming remarks at a New York Fed event, “Inaugural Conference on the International Roles of the U.S. Dollar.” There are a lot of Fed (and a few ECB) employees meeting with a large number of academics to discuss things like “Central Bank Swap Lines: Micro-Level Evidence” and “Global Inflation and Exchange Rate Stabilization under a Dominant Currency.” You can see the whole schedule, all the topics, in the link. I don’t think Chair Powell’s 15 minute speech will have any great insights but I’m looking forward to reading the paper for the last session, which is “Digital assets and the U.S. dollar.”

Industrial production is expected to slow somewhat, which would actually be a pretty good outcome in light of the 2.2-point fall in the Markit manufacturing PMI for the month (and the 36.2-point collapse in the Empire State manufacturing index in May and the 15-point plunge in the Philly Fed index). 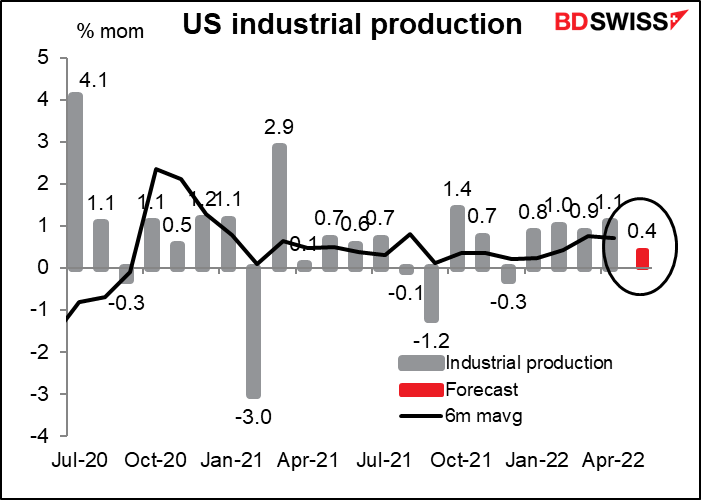 Capacity utilization is expected to rise a little but not yet up to recent highs. 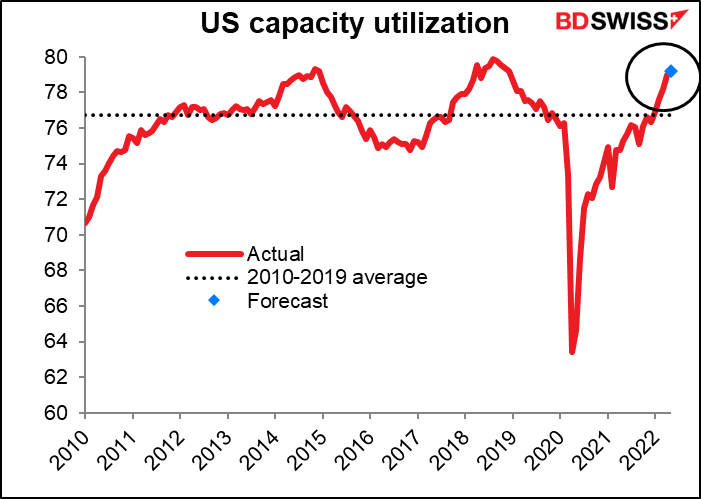 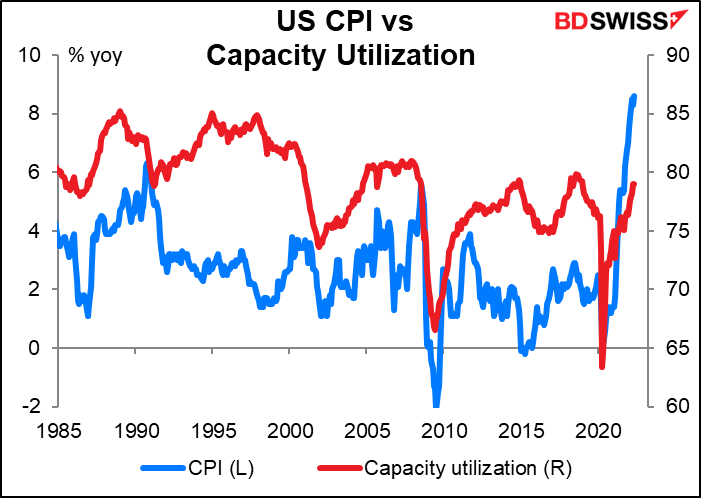 The IP data does have an immediate effect on the FX market, although it doesn’t seem to last long. 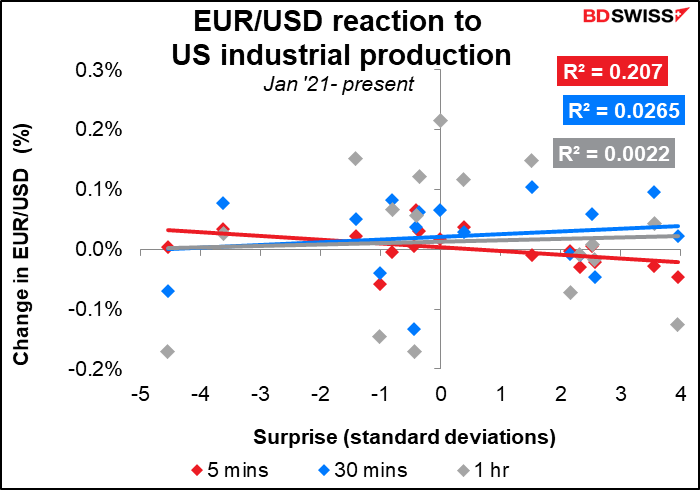 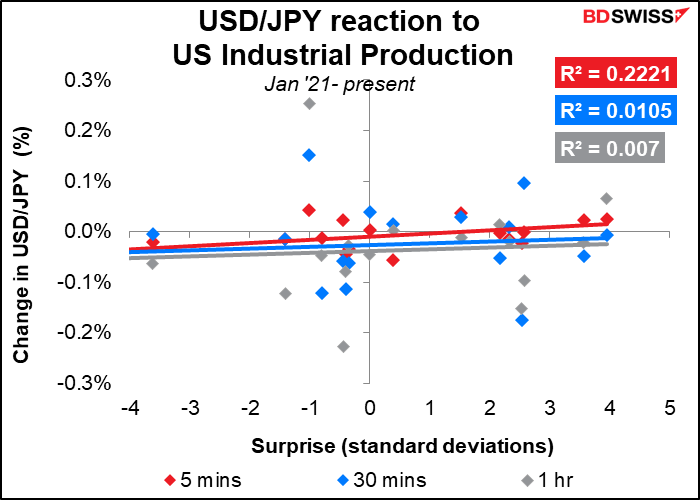 The US leading index is headed down for the second month in a row. This is not a good sign, particularly given some of the recent numbers we’ve seen from the Fed surveys, such as the -1.2 in the Empire State manufacturing survey. Also the Atlanta Fed’s GDPNow estimate for Q2 GDP is +0.0% (qoq SAAR). This would follow the Q1 actual figure of -1.5% and leave the US economy bordering on a technical recession (defined as two consecutive quarters of shrinking GDP). 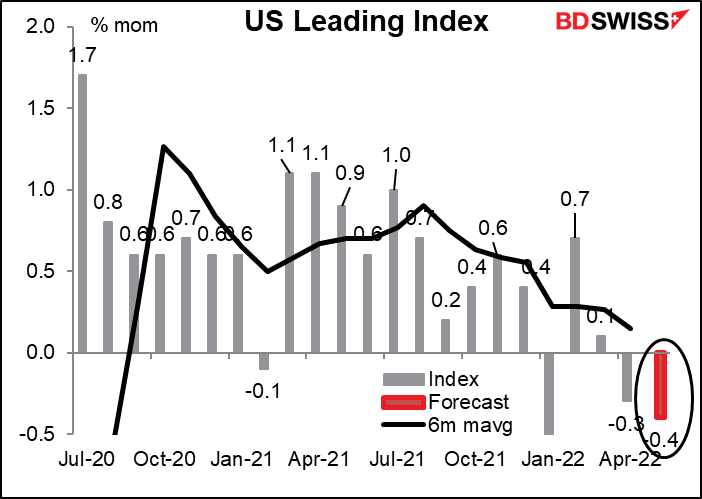 Over the weekend there’s the second round of voting for France’s General Assembly.  According to Politico, President Macron’s LREM/ENS coalition is expected to win anywhere from 257 to 296 seats. That doesn’t leave much margin for error for them to get the 289 seats necessary to win a majority 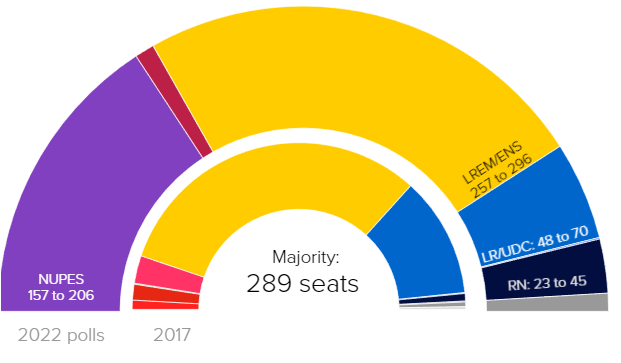 There are three likely scenarios:

The notable point here is that while the Presidential elections were focused on the threat to President Macron from the right, i.e. Marine Le Pen, the actual threat to his agenda will be from the left.