You are at:Home»Market Preview»EUR Up, NZD Down as Oil Falls; Conference Board consumer confidence, JOLTS 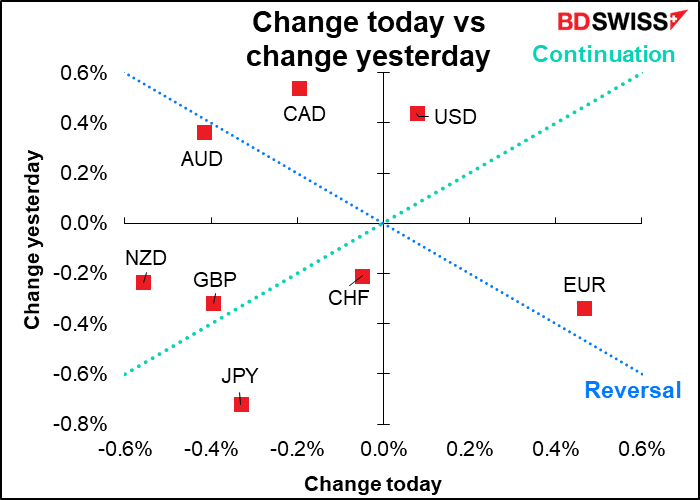 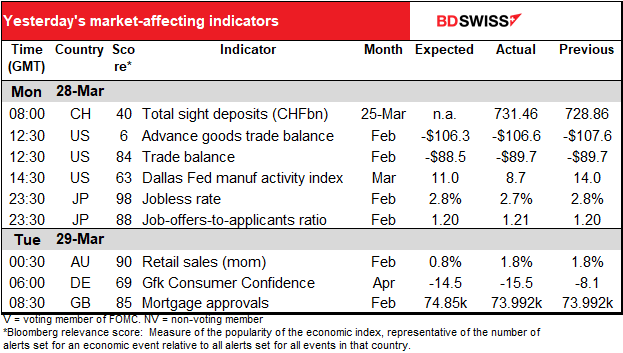 Another day of trying to figure out why currencies move. I can’t find any particular reason why NZD did so poorly. Commentators in the region simply said it was “due for a correction” after rising for some time, which is another way of saying “no idea, mate.” All the commodity currencies were under pressure as China announced a nine-day lockdown in Shanghai. The news also hit oil as lower Chinese mobility and production would be a big hit to demand. But then why did CAD outperform AUD and NZD? Perhaps because of the latter two’s dependence on trade with China. Of course that still leaves us wondering why AUD outperformed NZD, but some mysteries are impenetrable. 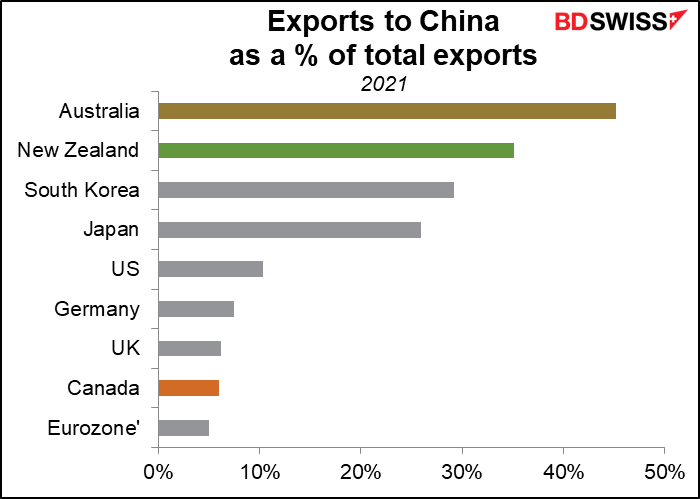 JPY continues to capture the market’s attention. USD/JPY briefly went over 125 during the European morning yesterday, the highest level since August 2015, but came back down a bit after Finance Minister Suzuki came in with the usual meaningless verbal intervention (“We need to closely monitor the impact of the yen on the economy with a sense of urgency,” he said, as if “monitoring” does anything.) These comments are essentially meaningless, but financial firms take them seriously because if they act contrary to what the Ministry of Finance wants, MoF officials can make life difficult for them when for example they ask for permission to open a new branch or some such.

The benchmark 10-year bond briefly went to 0.252%, exceeding the Bank of Japan’s 0.25% yield curve control (YCC) ceiling for a moment.

Meanwhile, other yields moved higher too – 30-year yields closed above 1.0% for the first time since early 2016. You can see how anomalous the 10-year sector is, thanks to the BoJ’s YCC program. 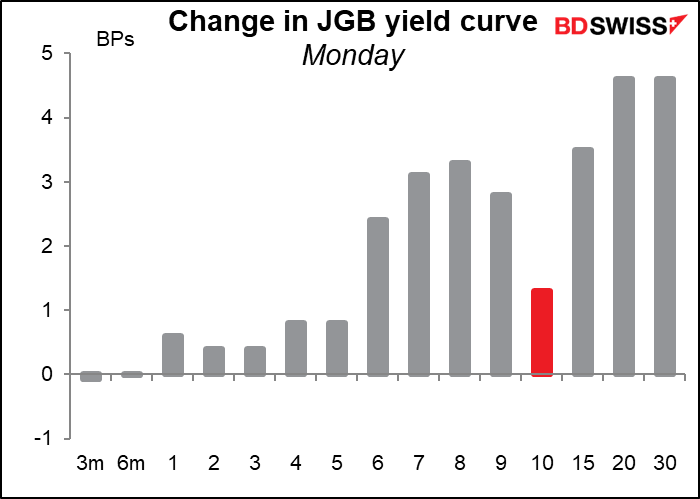 There was some action in the US Treasury market too. The 5 year/30 year yield curve inverted for the first time since 2006. OK it’s only about 2 bps inverted this morning (vs 7 bps at one point yesterday), but that ‘s a start. The more closely watched 2yr/10yr, a frequently referenced leading indicator of recessions, is still positive but barely: +8 bps. 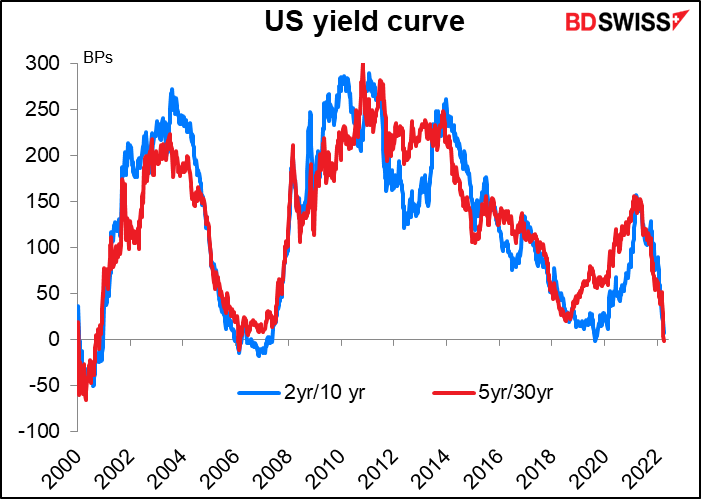 The Asian day lingers into European time as Australia’s FY2022/23 budget will be announced at 19:30 Sydney time. The forecast for the budget deficit will probably be narrowed, thanks to a stronger economy and higher commodity prices, although the government is likely to be conservative and continue to forecast throughout the forecast period. The policy focus in the budget is likely to shift from boosting demand to supporting supply, as the unemployment rate this year is likely to be the lowest since 1974. There may well be a cost-of-living package for lower-earning people to offset some of the effects of higher fuel prices or perhaps some other similar measure, such as a reduction in fuel excise tax. The latter would also have implications for the consumer price index.

We saw the pound weaken following last week’s UK Spring Statement, when that failed to come up with any major new fiscal policies to alleviate the burden of inflation. We could see the same effect on AUD after this budget.

When the US day gets underway we’ll get the Conference Board consumer confidence figure. It’s expected to be lower, as was the U of Michigan consumer sentiment index for the month, even though the stock market is up 5.5% from last month’s release date, continuing jobless claims have fallen by 8.1%, and new virus cases are down from 87,182 to 31,133 a day. But the war in Ukraine drags on and inflation remains stubbornly high.

Although this indicator has a relatively high Bloomberg relevance score, it doesn’t have a particularly consistent impact on EUR/USD. 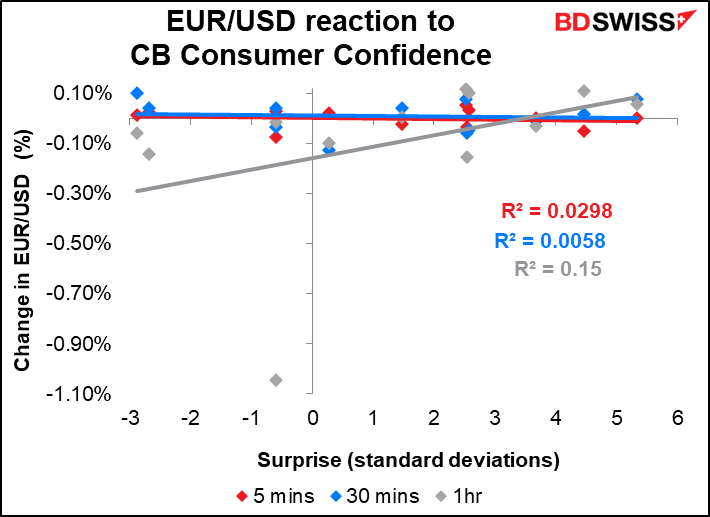 The Job Offers and Labor Turnover Survey (JOLTS) program is expected to turn up another bumper crop of job openings. Openings are expected to be down 263k from the previous month. Still they’re expected to be not far off the record high set in December of about 11.5mn openings. There’s no forecast for the quit rate. 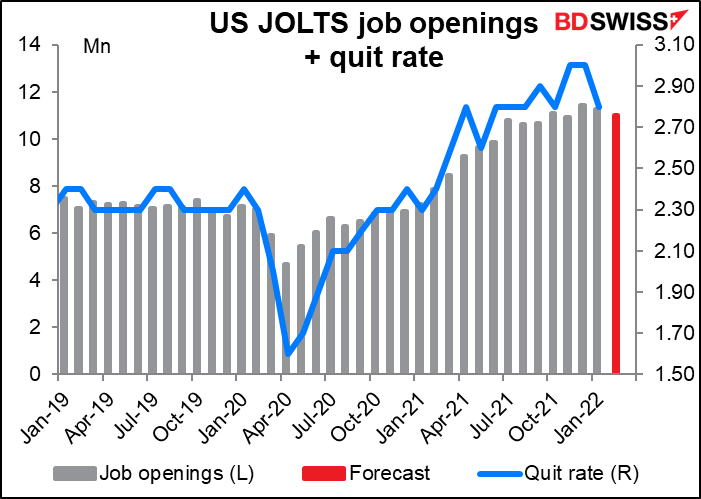 Although openings are expected to come down, the number of unemployed is coming down faster. As a result the number of job openings per unemployed person is forecast to rise a bit to 1.75 from 1.73. The record, set in December, was 1.81. 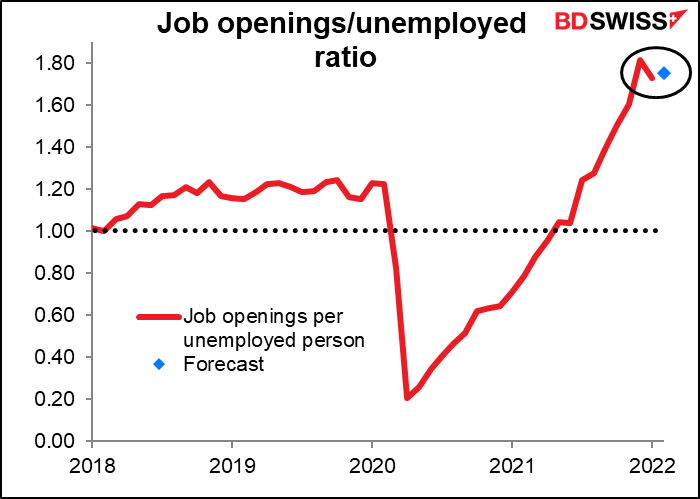 Overnight we get Japan’s retail sales. It’s a less important indicator for Japan than for many other countries. In any case sales are expected to decline slightly yoy, the first such fall in five months, thanks to the semi-emergency measures against COVID-19 that were in effect during the month. 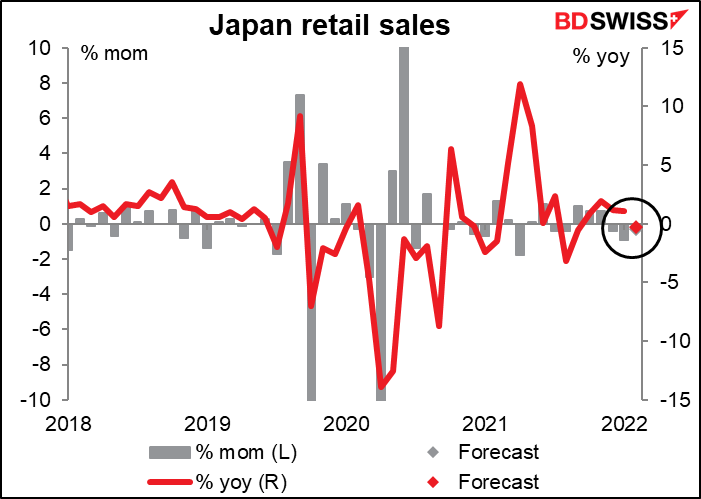 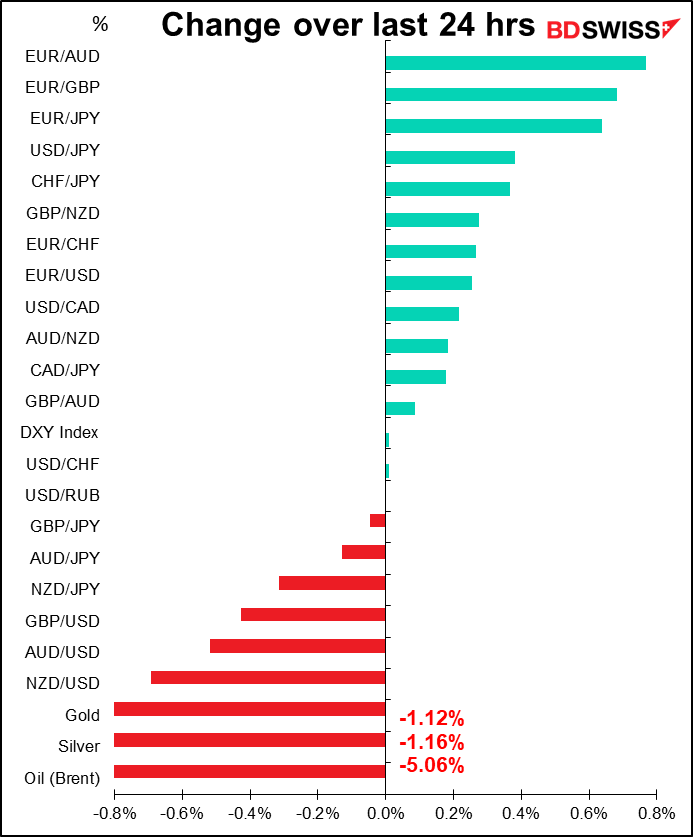