The Bank of England is not likely to make any policy changes at its meeting this week. The focus then will be on any changes in forecasts in the August Monetary Policy Report and how many people (if any) vote to change the quantitative easing program. The Bank could announce the results of a study into how it would go about unwinding its asset purchase program when the time comes.

Note: the Bank said in June that Bank staff have revised up their expectations for the level of UK GDP in 2021 Q2 by around 1½% since the May Report. It’s unclear to me how that would affect the yoy rate of increase shown in this table.

As you can see, the Bank’s forecasts from May were not a million miles off from the current market consensus for this year and next. It’s therefore likely that their Q3 forecasts will only be tinkered with. Recent comments by Monetary Policy Committee (MPC) members have been fairly constructive despite the worsening virus problem in Britain. They could downgrade Q3 estimates because of the virus but then reasonably predict a stronger year-end as the economy rebounds, leaving unchanged the overall estimate that the economy will recover to pre-pandemic levels of output by Q4 this year. 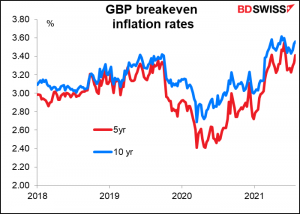 With considerable uncertainty around the course of the pandemic, plus various government support programs just starting to wind down, the MPC is likely to remain patient, with QE purchases continuing at their current pace until the November 2020 GBP 150bn QE package is exhausted in mid-December. Attention will then turn to when they start signaling a possible hike in rates. At the moment, the overnight index swap (OIS) market sees only about a 50% probability of a 25 bps hike within the forecast horizon (till June 2022). 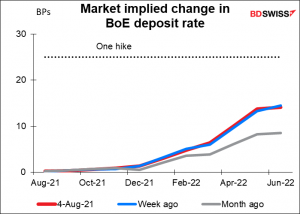 One possibility: a map to normalization
After the publication of the recent House of Lords Economic Committee report into quantitative easing (QE), the MPC has been under increasing pressure to map out its plan for normalizing policy. As the Committee’s report said,

The Governor told us that the Bank of England is reviewing whether to
reverse the order in which it committed in 2018 to tighten policy. The Bank’s policy since 2018 has been to begin to unwind asset purchases only when interest rates had reached 1.5%. However, the Governor has recently expressed his preference to reduce the Bank’s balance sheet prior to hiking interest rates in order to give the Bank more room for manoeuvre in future downturns. He told us that, given the economic and health shocks since 2018, there is a “really strong case to re-evaluate that decision [to unwind asset purchases once interest rates hit 1.5%]in the light of what has happened since”. Any decision the Bank comes to will be done on “a predictable basis, which is announced in advance.”

The MPC could release the results of its review into sequencing at next week’s meeting. This might include lowering the threshold for reversing the asset purchases – quantitative tightening (QT), in other words – to 1%. Or it could even go so far as to say that they would start QT before raising rates at all. If for example they also announce that they are now capable of implementing negative rates, that would give them more flexibility on rates to respond to any emergency and reduce the need to rely on QE.

The vote: 7-1 probably, 6-2 perhaps
External member Saunders, usually one of the more dovish members, recently made a speech, The Inflation Outlook, in which he took a noticeably more optimistic and indeed hawkish tone. He’s likely to vote to curtail the Bank’s QE efforts. There’s a possibility that Deputy Gov. Ramsden could join him.

But comments from other MPC members have indicated that they think the cost of waiting for more information is low as long as inflation expectations remain anchored and price rises are confined to those components that are particularly affected by the reopening of the economy.

A 6-2 vote plus a more substantial upgrade could be a GBP-positive combination. It’s hard to tell whether that might trigger the latter half of a “buy the rumor, sell the fact” reaction or would spur more GBP buying.

I would expect to see GBP firm if they significant upgrade the forecasts or if they make a noticeable change to their sequencing, but otherwise I think the market is likely to be disappointed by a “steady as she goes” approach and the currency could weaken.