You are at:Home»Market Preview»USD Up, AUD Down on Interest Rate Moves; quiet Easter Day ahead 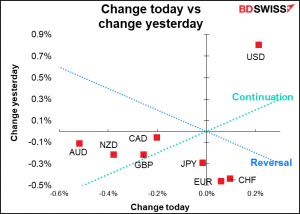 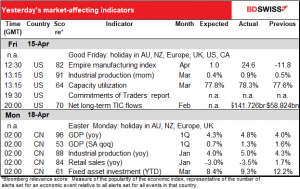 While trading in most government bonds has effectively stopped, Treasuries continue to trade and boy, are they moving! Here’s a quick little table of changes since Thursday morning. 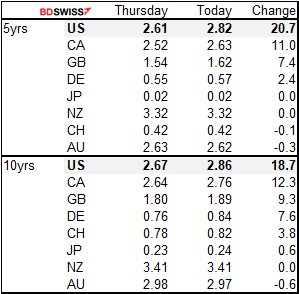 The US at the top and AU and NZ at the bottom of the table should help to explain their positions in the currency table at the top of this comment.

If we graph the change in the currency’s value vs the movement in the bond market, we get a 95% correlation (73% if we eliminate USD). That’s good enough for me. (For USD value we take the movement of the DXY index, flawed though it may be.) 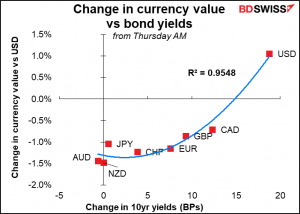 In short, the market is still working on the “monetary policy divergence” theme. That’s positive for USD and negative for JPY and EUR.

Le Pen in trouble? Reuters has a story saying, “French prosecutors said on Sunday they are examining a report by the European Union’s anti-fraud agency accusing far-right presidential candidate Marine Le Pen and members of her party of misappropriating thousands of euros’ worth of EU funds.” This could have an impact on next Sunday’s run-off in the French election. It’s a EUR-positive development.

Hedge funds seem to have been behind the big increase in MXN longs. They also flipped from short EUR to long EUR. They trimmed their short AUD and CAD positions somewhat while trimming their long GBP. 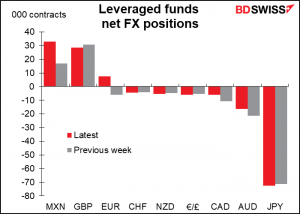 Retail made few major changes in their asset allocation. They cut their long AUD and nearly doubled their long DXY, although that remains a small position. They modestly increased their short GBP. 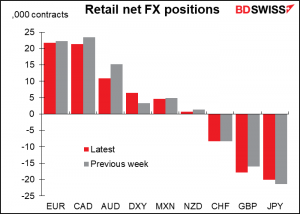 There’s a big difference between hedge funds and retail on GBP and CAD. 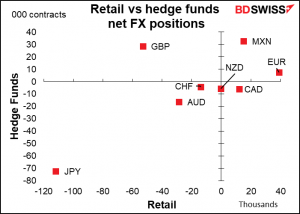 Precious metals: Speculators increased their net longs in gold and silver slightly, but so slightly as to be imperceptible on this graph. Sorry. 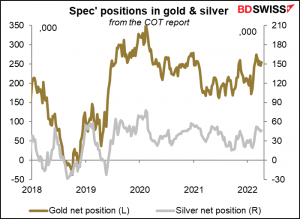 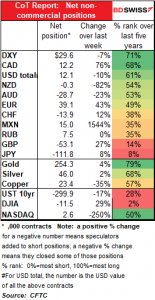 As it’s Easter Monday today, many financial centers are closed. We therefore have a light schedule.

Canadian housing starts are expected to be little changed from the previous month and about the same as the six-month moving average. Little change, little impact, I’d assume. 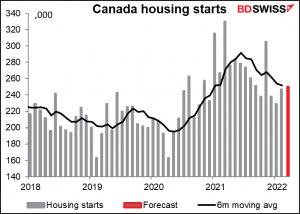 I don’t usually cover the National Association of Home Builders (NAHB) index, but since I get paid by the word I have to write about something today otherwise I won’t be able to afford lunch. The index is holding up remarkably well considering the sharp rise in mortgage rates. Will the US housing market remain resilient in the fact of the Fed’s rate hikes? If so, the Fed might have to hike even further than it would otherwise, thereby increasing the risk of an even deeper recession. 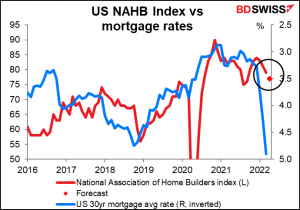 St. Louis Fed President Bullard speaks today, but he’s one of the more frequent speakers and his (hawkish) views are well known already so I doubt if his comments will have any market impact, except maybe with nothing else going on people might react to the same message that they’ve been hearing over and over again for the last few weeks from him anyway.

Overnight the Reserve Bank of Australia (RBA) releases the minutes of its recent meeting.  At this meeting the RBA dropped its line about being “patient” on the inflation outlook (“The Board is prepared to be patient as it monitors how the various factors affecting inflation in Australia evolve”) and made other changes to its forward guidance that signaled a significant change of heart. It wasn’t clear from the statement though exactly what caused that change. The changes that they made in their description of the economy and inflationary pressures didn’t go far enough to explain the significant changes in the conclusion that they drew.  The market will therefore be eager to read the more comprehensive explanation in the minutes to see what prompted the RBA to lose its patience.

Might it be something about “inflation psychology,” the phrase that Gov. Lowe has been throwing around, which was noticeably absent from the statement? Last week the Reserve Bank of New Zealand, the Bank of Canada, and the European Central Bank all mentioned “inflation expectations” as a major threat to their policy. The RBA statement was noticeable in that it did not mention inflation expectations at all, even though Gov. Lowe has been talking a lot about “inflation psychology.” Maybe that’s because so far, Australian inflation expectations are still within the RBA’s 2%-3% target range and so not something to get worried about – yet. 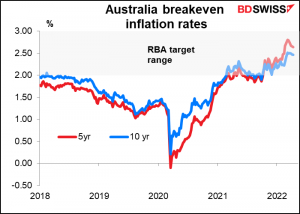 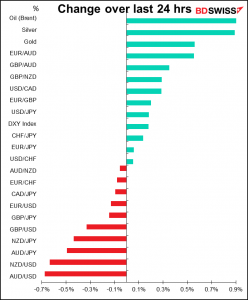