You are at:Home»Market Preview»Commodity Currencies and Yen recover; US Durable Goods, Australia CPI 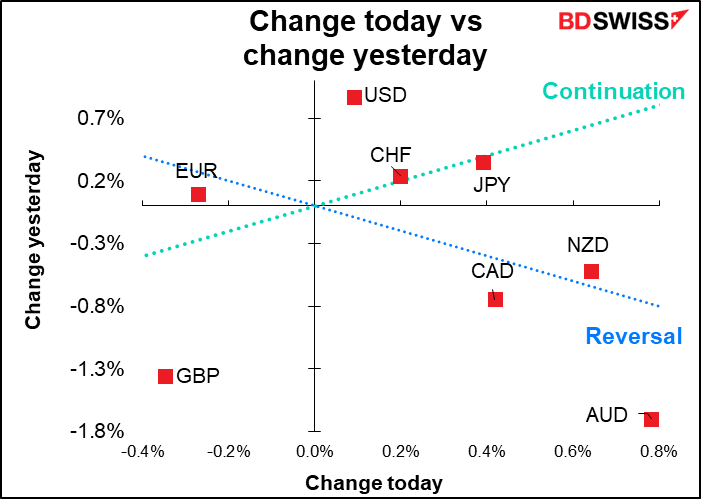 The focus now is on China and the prospects of further lockdowns there as COVID-19 cases surge and parts of Beijing go into lockdown for mass testing. Fears of a slowdown in China sent equities sharply lower yesterday, with the CSI 300 index falling 4.94%, its largest one-day decline since February 2020, the beginning of the pandemic. It continued falling today, down 0.8% at the time of writing, to a two-year low. 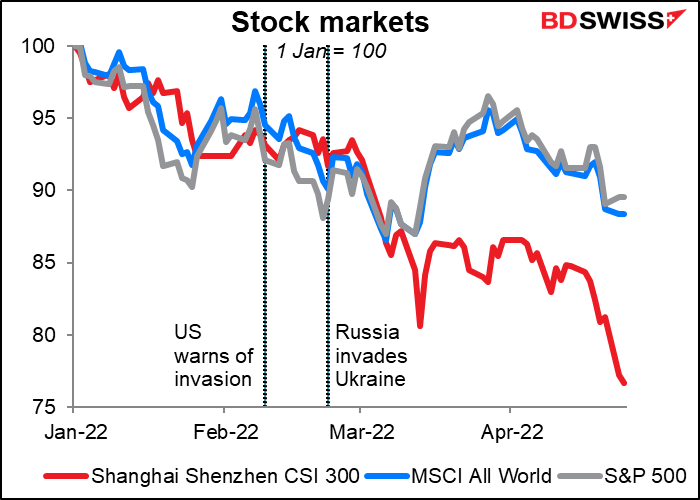 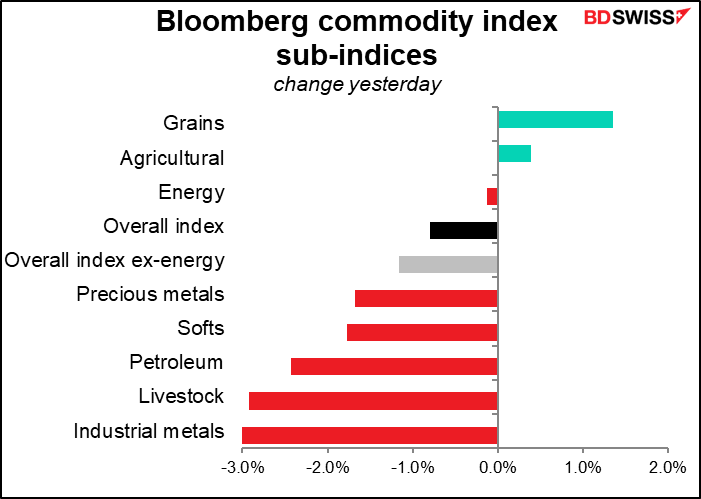 …and reduced inflation expectations in most countries…

…which helped bond markets to rally, especially in Europe.

Nonetheless, the renminbi (CNH) recovered after the People’s Bank of China (PBoC) registered its disapproval of the weakness by cutting financial institutions’ forex reserve ratio by 1 percentage point to 8%. The forex reserve ratio is the amount of a bank’s foreign exchange holdings that they have to keep in reserve while trading. Lowering the ratio allows banks to trade more in the forex market. The PBoC uses the ratio as a signal for where they want the renminbi to go, lowering it when they think the currency is too weak and raising it when the currency is too strong, or at least when they disagree with the pace of a move.  The PBoC’s action snapped five days of losses for CNH.

AUD/USD hit a two-month low of 0.7135 before recovering along with CNH. It’s somewhat surprising to see the three commodity currencies all higher this morning despite the fears over global growth.

That may be because risk sentiment recovered during US trading as the S&P 500 found support at 4,200. After falling as much as 1.7% during the day, the S&P 500 managed to rally to close up 0.6% at the day’s high. The NASDAQ index too closed higher. I couldn’t find any particular trigger for the turnaround.

Elsewhere, Bank of Canada Governor Macklem indicated that the Bank will be « considering a 50-basis-point increase » at its meeting in June. If anything this is more dovish than the market as the overnight index swaps (OIS) are already pricing in a 62 bps hike at the meeting and Canadian bond yields fell along with other markets. 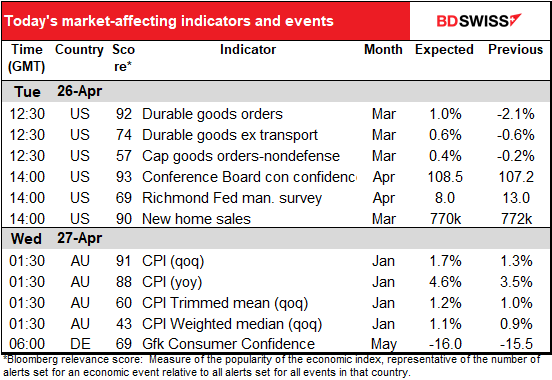 Nothing worth noting during the European morning. 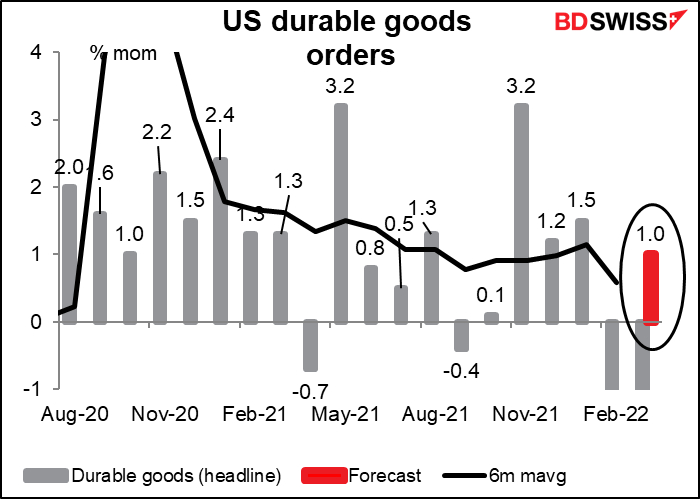 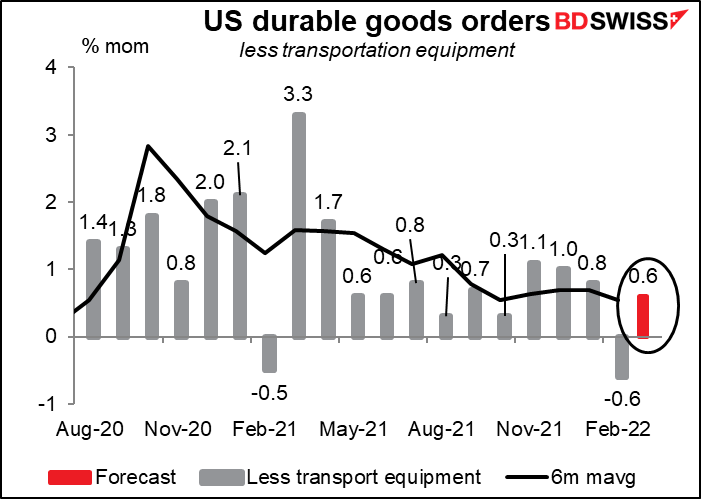 In any case, a rise at this point would be excellent news. On these forecasts, orders would be 19.4% above the pre-pandemic level including transportation equipment and  23% excluding. That suggests corporate investment intentions are still strong despite the interest rate outlook = USD+

In any event, a further rise in confidence could provide a boost for the dollar. 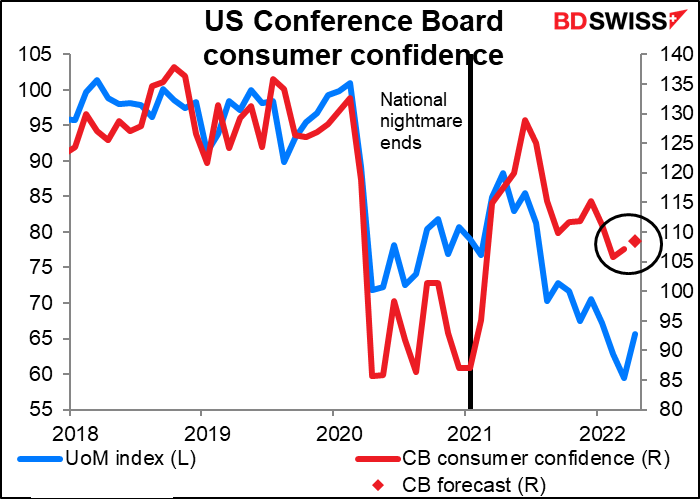 The Richmond Fed manufacturing index is expected to be down slightly. This is in contrast to the average of the Empire State and Philly Fed indices, which moved sharply higher during the month (thanks to the Empire State manufacturing index – it turned around from -11.8 to +24.6 while the Philly Fed index fell 9.8 points.) It’s also contrary to the Markit manufacturing purchasing managers’ index (PMI), which was up 0.9 point. The Richmond Fed index doesn’t have a particularly high Bloomberg relevance score but I find that it has the best correlation with the closely watched Institute of Supply Management (ISM) manufacturing PMI of any of the regional Fed indices and therefore should be important for the markets.

A decline here could offset some of the enthusiasm from a higher durable goods figure and Conference Board consumer confidence figure, but I suspect that the market will put more weight on the latter two and ignore this one if it’s contrary to the others. 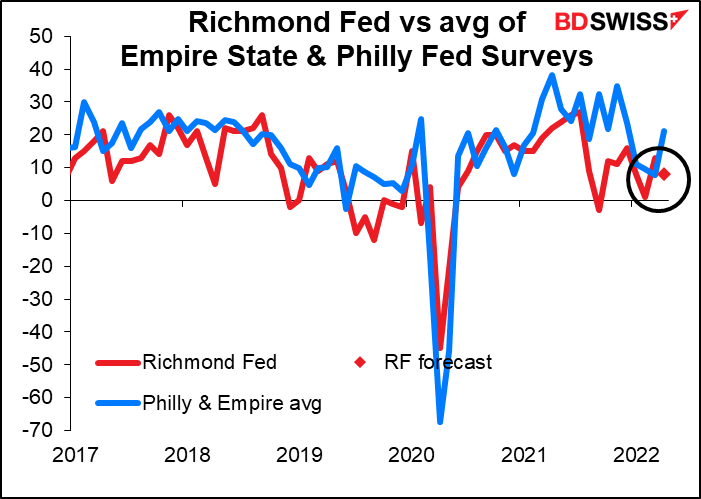 Especially if US new home sales prove to be good. Last week’s existing home sales were disappointing – they were expected to be at a 5.8mn annual pace but in the event were only 5.77mn, down 2.7% mom. New home sales are expected to be up 0.4% mom. That’s not impossible or even unlikely – the two only move in the same direction 54% of the time, which is little better than a coin toss. And housing starts for the month surprised on the upside, +0.3% mom instead of being down 2.6% mom as expected, so someone must think the US housing market is still strong. 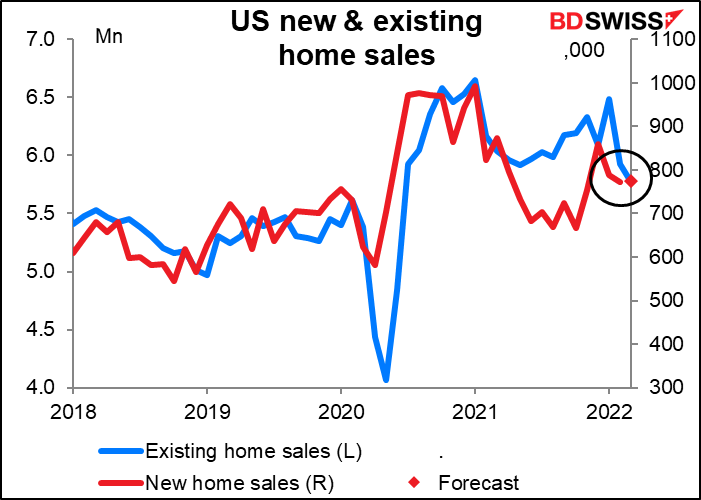 Overnight we get the important Australian consumer price index (CPI). This will be the last inflation update before the May 3rd (next Tuesday), June, and even the July Reserve Bank of Australia (RBA) meetings so it will be quite significant.

It’s expected to explode higher. The forecast quarterly rate of change — +1.7% qoq – is higher than the annual pace of increase just a few years ago. Meanwhile, both the core measures of inflation are expected to move above the RBA’s 2%-3% target range.

The RBA said recently that it expected “a further lift in inflation over coming quarters,” but this might be a bit too much. I think this figure could force a rethink of their policy at next week’s RBA meeting, resulting in a rise in AUD. 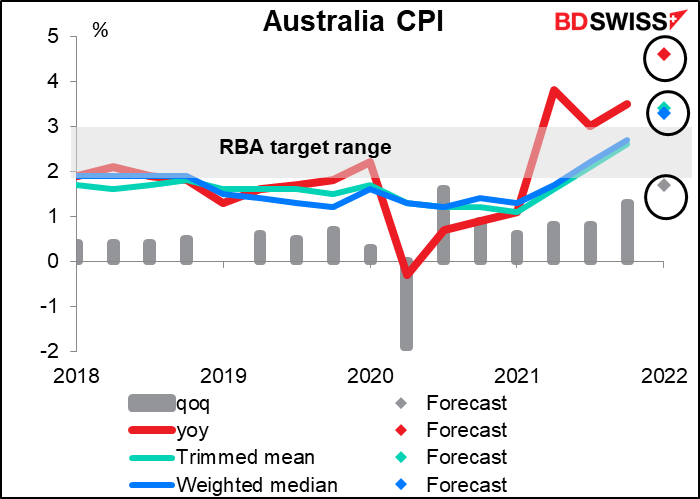 Traders interesting in taking a position around these figures might want to consider using AUD/NZD instead of AUD/USD. The former has a much closer reaction to the miss or beat of the indicator than the latter does (data back to 1Q 2019). The market reacts largely off the quarter-on-quarter figure, not the year-on-year. 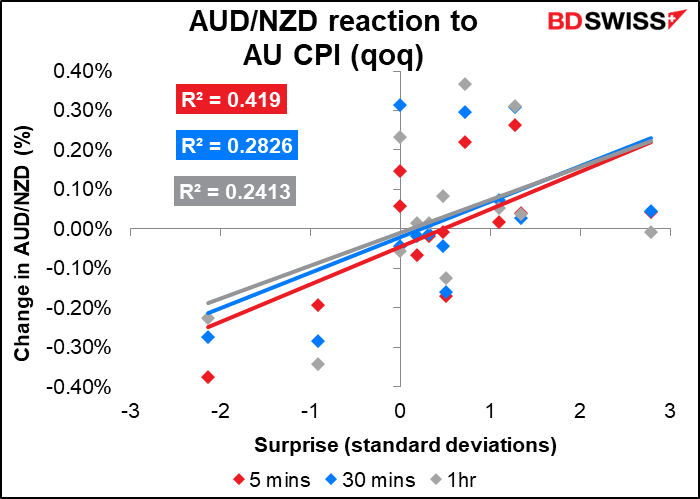 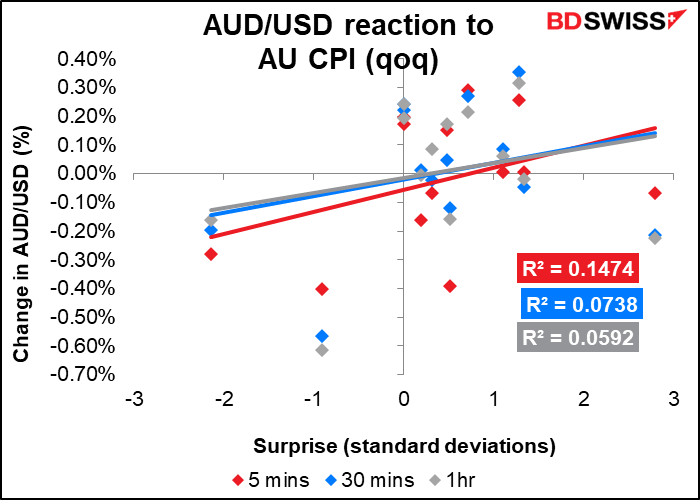 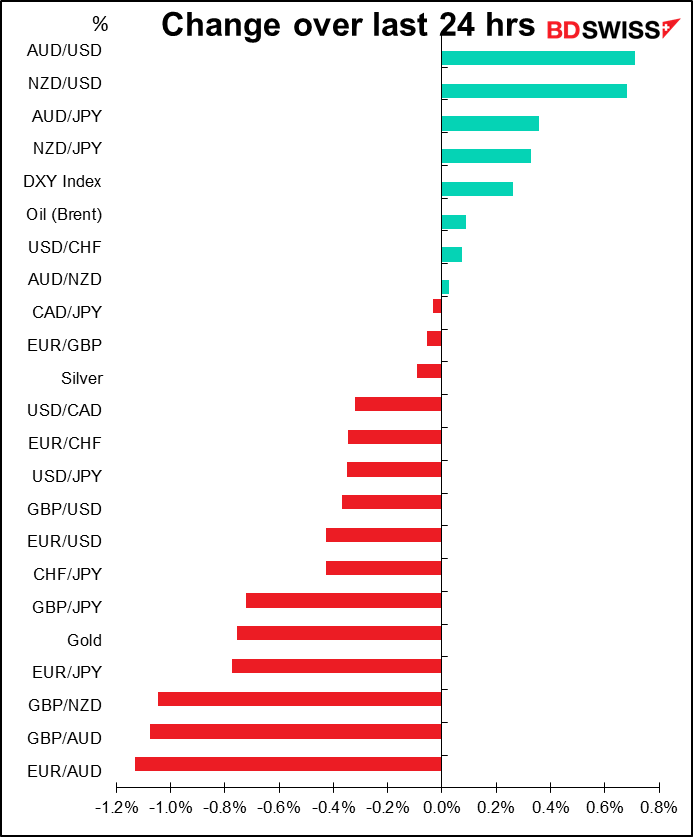