You are at:Home»MARKET PREVIEW»USD Up, precious Metals down after Great NFP; JOLTS Report 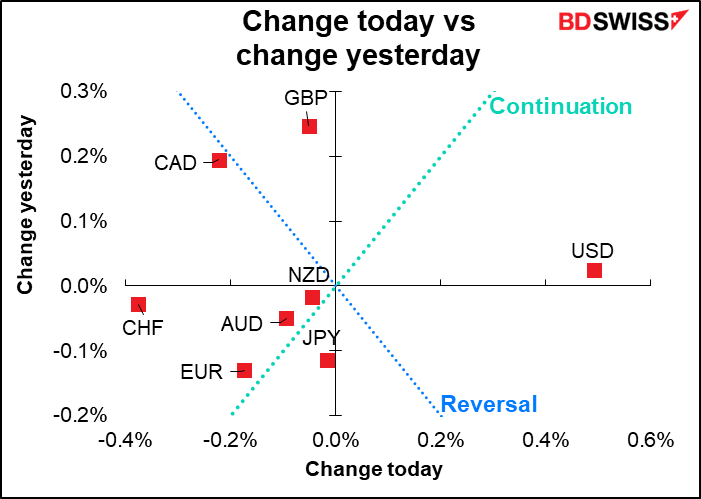 US gained against all the majors as Friday’s better-than-expected US nonfarm payrolls boosted expectations of Fed tightening. 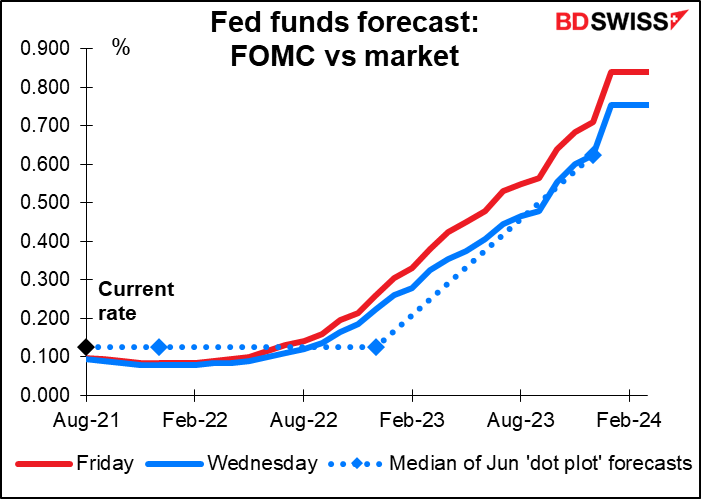 The headline NFP was higher than expected, though it was all due to government jobs – private payrolls were almost exactly in line with expectations.

The key point was a big drop in the unemployment rate with the participation rate rising – that’s great! Also average hourly earnings growth rose from the previous month (on a mom basis) which shows a tightening labor market.

Average weekly hours also rose – people don’t pay much attention to that but that’s important, because there are a lot of people who are working and if each of them works a bit longer, it means in total they get a lot more money. One-tenth of an hour on the average workweek (which is what we got this month) is equivalent to around 250k new jobs in terms of aggregate income creation.

This alone won’t qualify as “substantial further progress” but it certainly is progress. USD+

The bigger story this morning though was the collapse in precious metal prices. Gold was down 3.4% from Friday and silver -4.9%!!! There was a bizarre order to sell some $4bn in gold in the futures market early in the Asian day. As one commentator said on Twitter, “$4B in notional gold contracts for sale on a Sunday night is not a market, it is a currency intervention. Most private traders would lose their clients and/or their jobs for executing an order in such a fashion. So the questions are “Why?” & “Why now”?”

One comment I saw – and this hasn’t been verified – is that the Chinese government ordered two private Chinese commodity firms to liquidate their gold assets. Is this part of their drive to prevent commodity speculation? One source argued that they were taking advantage of the thin market to push the dollar up (and hence the CNY down) although I question why they would do that in such an indirect way.

Others think someone just wanted to move the market to profit off of a short position.

And there was speculation that someone wanted to dump gold before Tuesday’s US consumer price report, which is expected to show a decline in the rate of inflation – although again, it was a really really clumsy way to lighten your position.

In short, it’s one of those mysteries we’ll never really know the answer to, but it doesn’t seem to have been a fundamental view on gold. I stand by my comments in Friday’s Weekly Outlook that gold looks like a good buy now, with global interest rates so low. The idea of buying gold vs silver looks like a safer play however.

Last week I pointed out speculators had switched to a long dollar position. This week they cut that back almost to nothing. This was almost entirely due to trimming their short JPY positions (their biggest overall position nowadays) and by almost closing out their GBP short position. Other changes were quite small in absolute terms, even if the percentage changes were sizeable in some cases – that’s just a function of how small the position is (e.g. NZD). 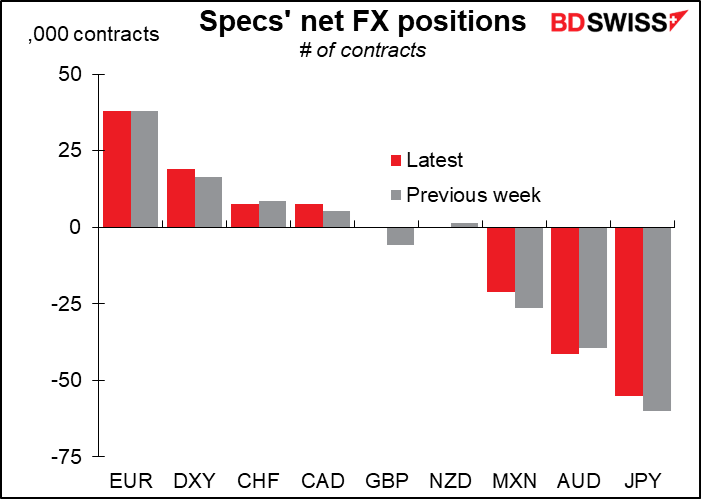 Hedge funds didn’t make that many dramatic changes, either. They increased their GBP longs and cut their commodity currency longs – AUD, NZD, and CAD. 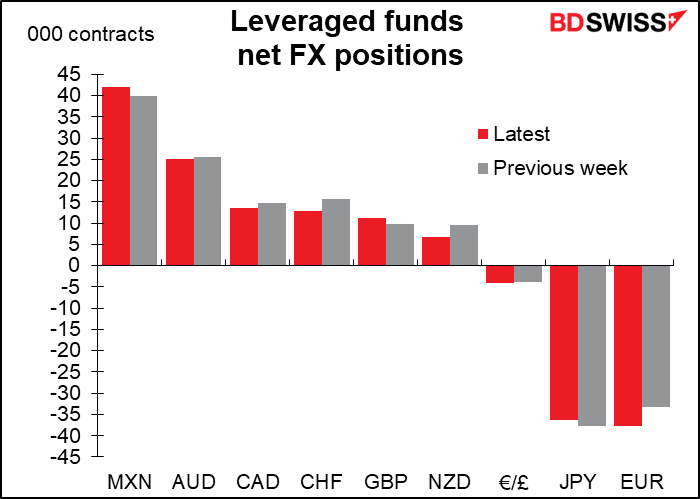 Retail cut all their positions, both longs and shorts, except MXN. My guess is that they’re reducing risk before they all go on vacation – to Mexico! 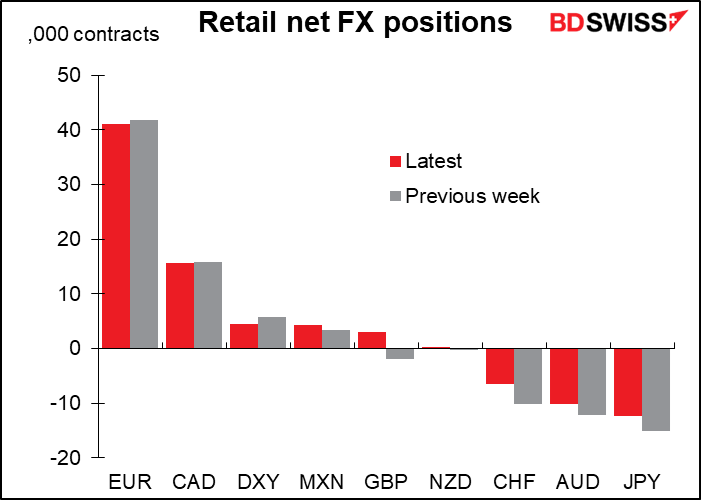 Speculators made little change in their precious metal positions – cutting their long gold position by 3.1k contracts and increasing their long silver by 4.9k. 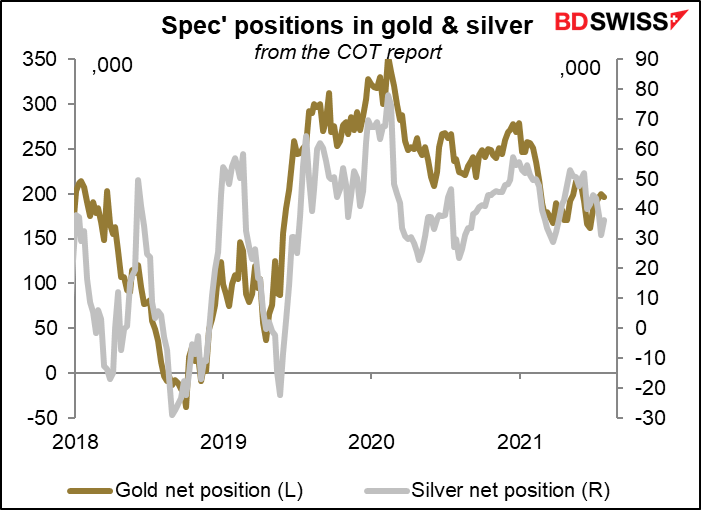 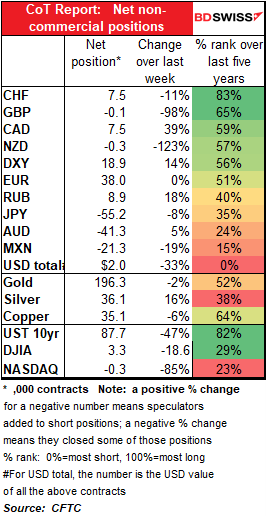 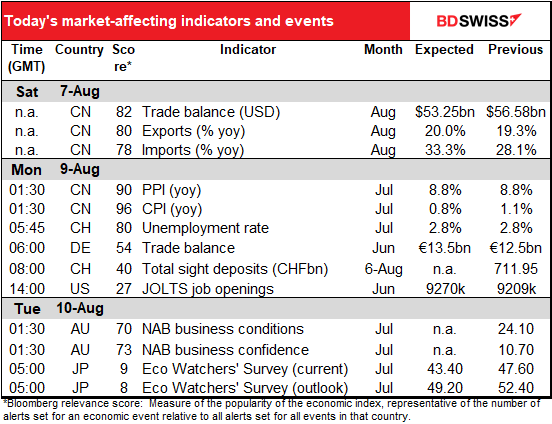 A dull start to a pretty dull week, indicatorwise.

Another weekly decline in the Swiss sight deposits! I keep waiting for the Swiss National Bank to come in and clobber the market, but they don’t. On the contrary, deposits have declined over the last four weeks in total. Yet EUR/CHF has started to move up (and indeed CHF did weaken noticibly Friday). Maybe their “watchful waiting” is working. 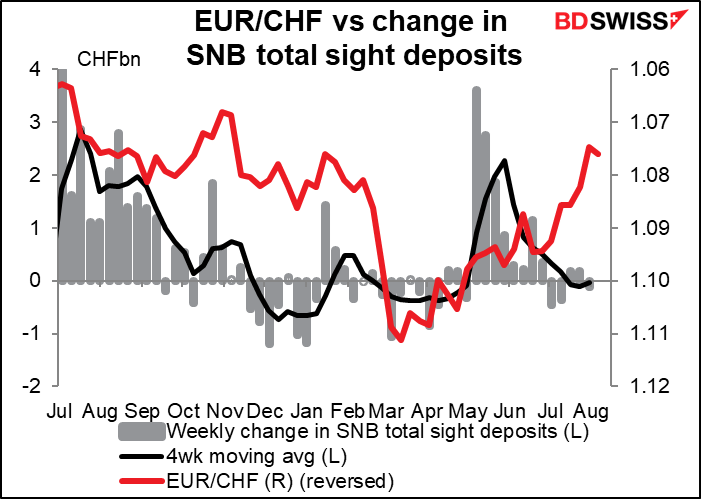 I discussed the Job Offers and Labor Turnover Survey (JOLTS) report at great length in my Weekly Outlook, so I’ll confine my comments here to saying that the market consensus is for a record 9.27mn job openings. However please note that there are only seven economists contributing their guesses forecasts to this consensus. 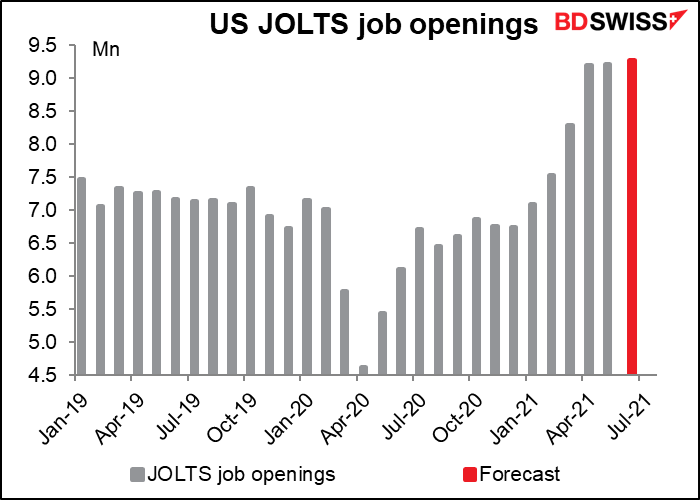 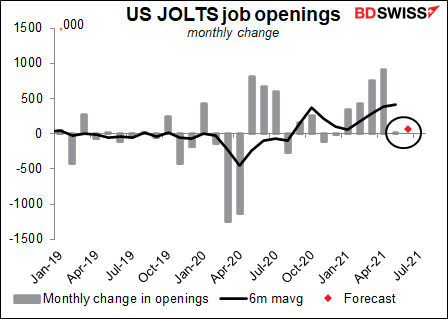 One thing I didn’t mention about the JOLTS report in my weekly was the quit rate. This is the percentage of people who willingly quit their jobs every month. Normally, people only quit their jobs when they’re confident they can get another one. It’s well above the historical norm (data back to Dec 2000), which suggests that a lot of people have confidence in the job market. No forecast, but this is undoubtedly one of the thousands of data points the Fed is looking at to evaluate the state of the labor market. Former Fed Chair Yellen, a labor economist by training, used to talk about this indicator a lot. 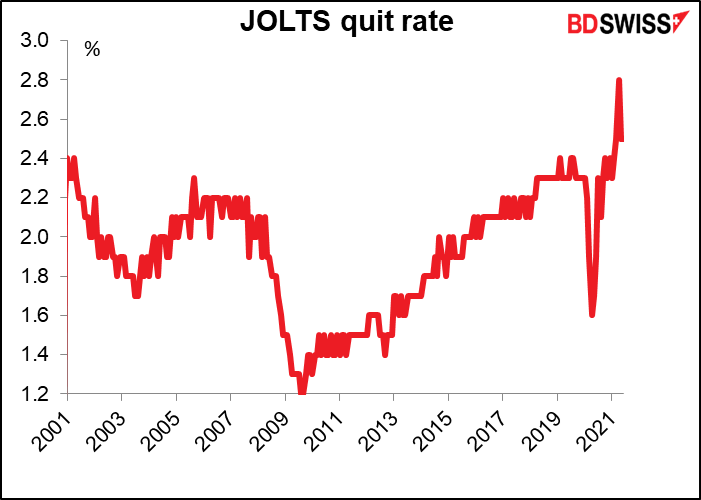 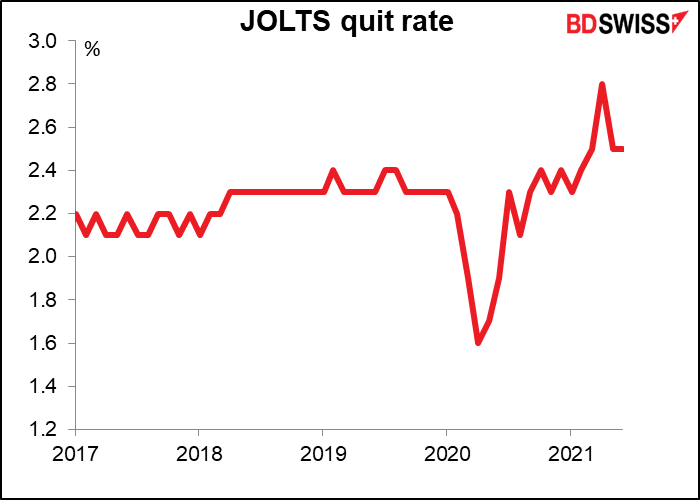 Then that’s about it until relatively late in the Japan day we get the Eco Watcher’s Survey, which no one cares about but I think is worth watching as a good advance warning mechanism about the country’s beleaguered service sector. Remember, Japan is the only major country whose service-sector purchasing managers’ index (PMI) hasn’t returned above the 50 “boom-or-bust” line since the pandemic began.

Unfortunately the market expects the Eco Watchers’ sentiment to have deteriorated in July, like the service-sector PMI did, no doubt because of the ever-widening States of Emergency. 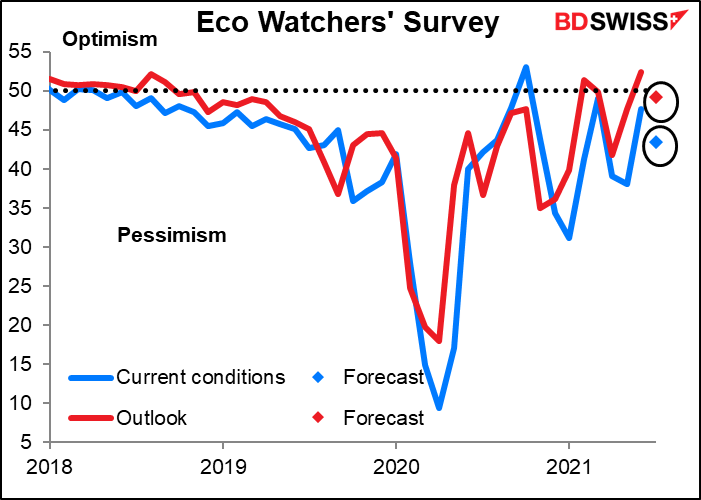 FYI over the weekend I was cleaning up my directories and I just thought to look at a random weekly report that I wrote. In the one I picked (March 16), I said I thought it would take a long time for the US to get over the pandemic because of a) the Trump regime’s massive mishandling of the whole affair and b) the idiotic response of many of the people. I used this lady’s tweet as an example of the latter:

I just wanted you to know, she’s still at it!! 600k+ deaths and she hasn’t changed her mind. That was one of the better predictions I made, although to be honest it wasn’t that hard to predict. 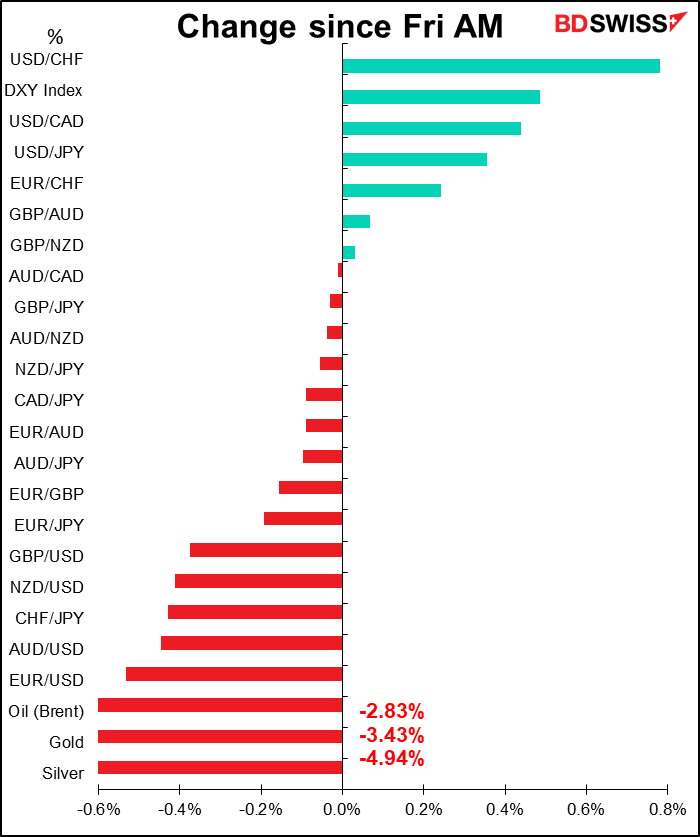