You are at:Home»MARKET PREVIEW»Commodity Currencies down on China Growth fears; NFIB Survey 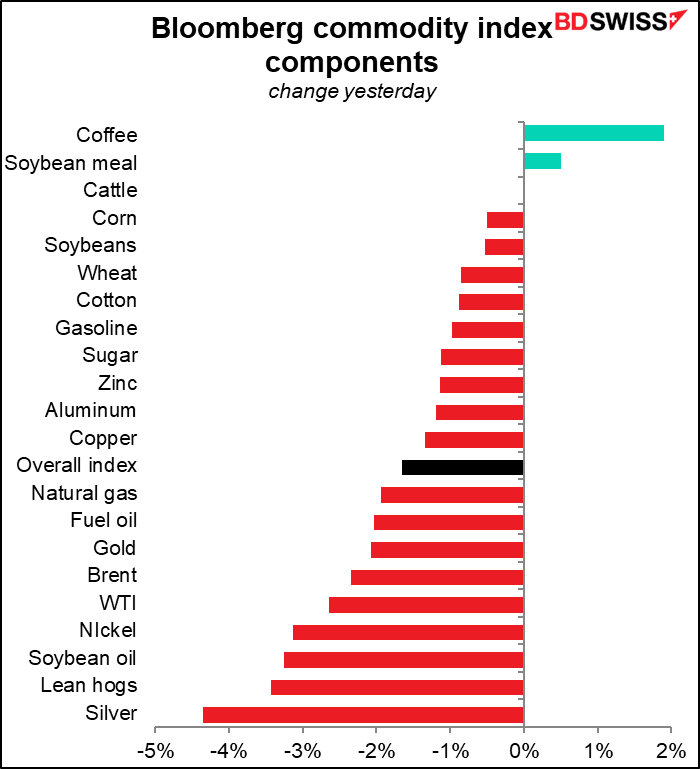 China has instituted border controls, targeted lockdowns, travel curbs, and mass testing across the country, even though the WHO says that the country is averaging a little over 100 new cases a day – nothing compared to the US (over 100k new cases a day). With restrictions in China beginning to bite into activity there, people are worried about the impact on global growth. Several brokerage firms have downgraded their estimates for China growth recently 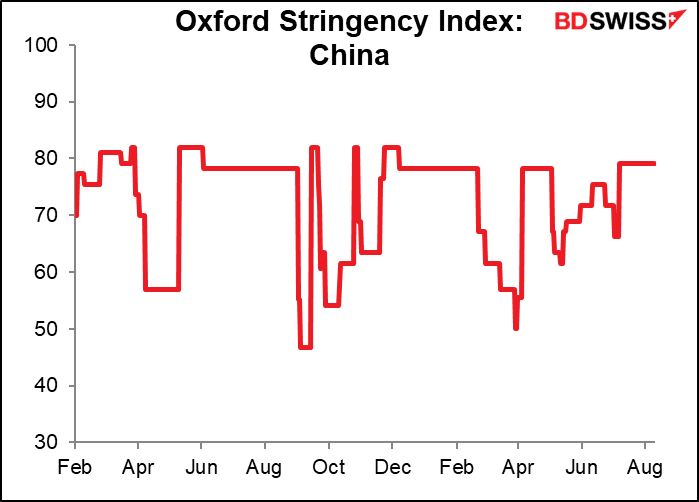 There’s no doubt that Australia and New Zealand will be the G10 countries most hurt if China’s growth does slow. Those two are extremely dependent on China for their export markets. (South Korea though may be hurt even more, as its exports to China account for more of their GDP.) 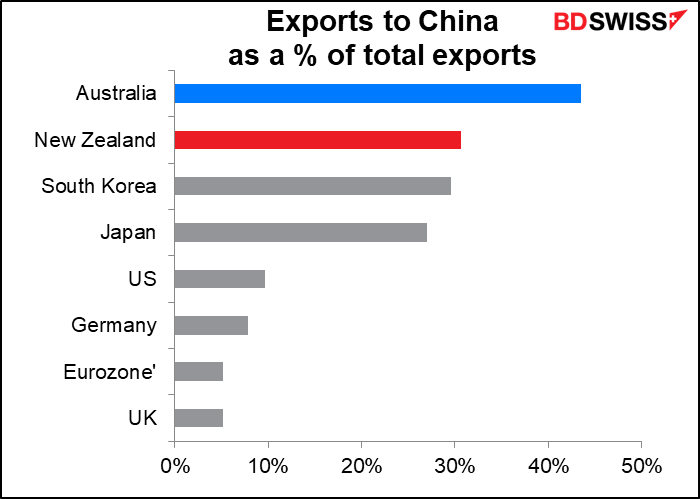 As for why NZD fell more than AUD…I have to admit, I don’t know. It’s kind of a mystery, given that iron ore prices continued to fall and the National Australia Bank (NAB) business sentiment indices fell sharply. 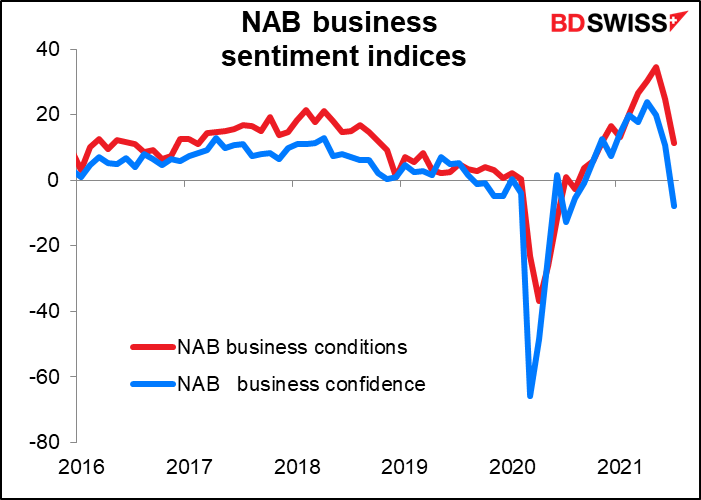 One also might have thought that higher NZ yields would’ve supported the currency as the New Zealand bond market sold off yesterday, but apparently not so much. 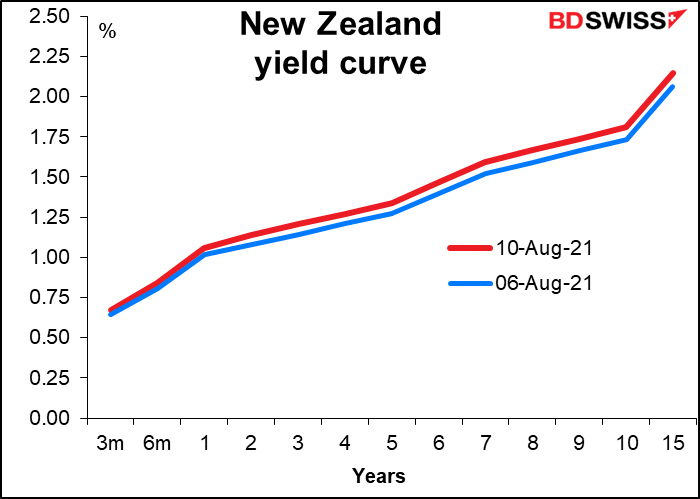 There’s a growing contradiction though between questionable global growth and strong US growth. Yesterday’s US Job Offers and Labor Turnover Survey (JOLTS) report showed a record number of new jobs (10.07mn vs 9.27mn expected, 9.21mn previously – revised up to 9.48mn). another sign of the rapidly improving US labor market. The healthy US economy is likely to get a further boost from infrastructure spending after the bipartisan infrastructure package cleared a major procedural hurdle Sunday and the Democrats yesterday released the text of their proposed budget resolution, the second of the two major infrastructure packages. This difference could fuel further US strength through the “monetary policy divergence” channel if it results in the US normalizing monetary policy before other countries. Yesterday two voting members of the rate-setting Federal Open Market Committee (FOMC), Atlanta Fed President Bostic and Richmond Fed President Barkin, both urged that the Fed start tapering down its monthly bond purchases relatively soon (Q4 according to Bostic). 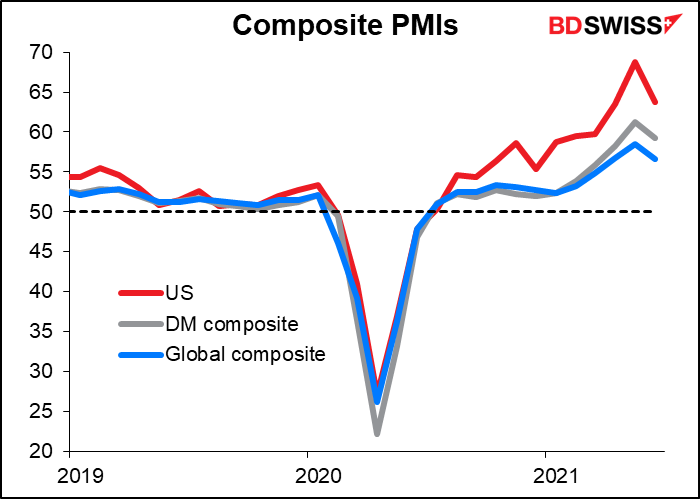 CHF fell sharply, with USD/CHF rising by almost 0.5% during the London session and EUR/CHF rising back above the 1.08 level. Yesterday’s Swiss National Bank (SNB) sight deposits data showed a big rise in deposits for the first time since June, suggesting that the SNB finally sprang the bear trap that I’ve been waiting for. The market had been lulled into a false sense of security by several weeks of no intervention and had been buying CHF in both the options and the futures market. The SNB’s actions may make them rethink the 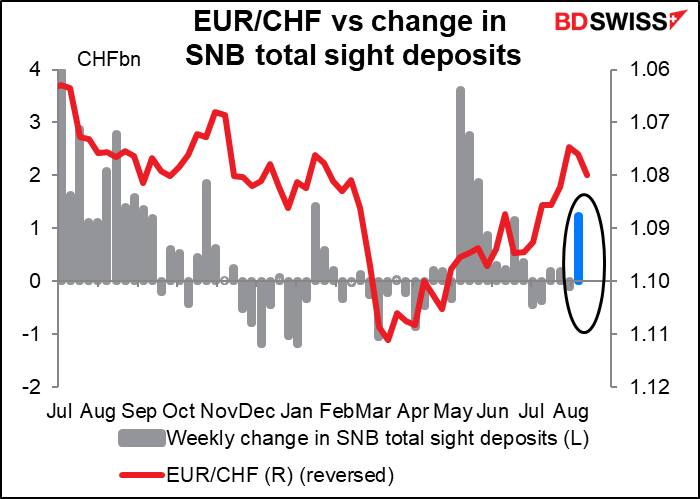 I said recently that I thought the Delta variant might not be as bad as expected, based on the experience of some countries that had had it – they saw a surge of new cases followed by a collapse, and hospitalizations and deaths were nowhere near what they were in previous surges. There’s some disappointing news nowadays however.

First off, the decline in new cases in the UK has stopped. That’s worrisome. 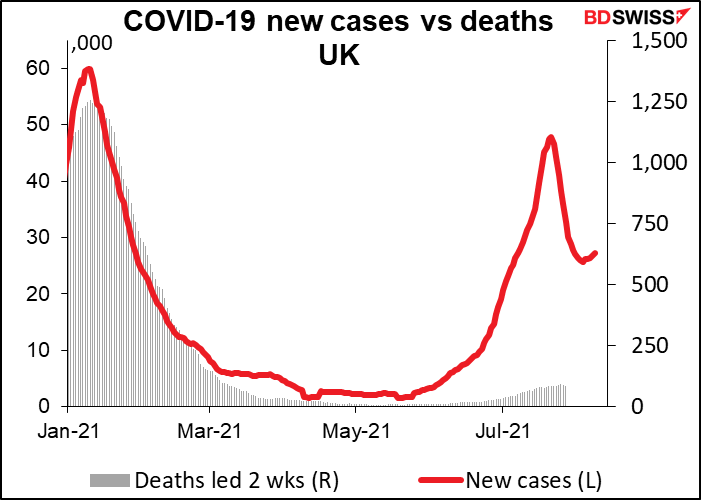 Secondly, the US isn’t responding the way other countries have. No one knows exactly why, but not only is there no sign of the surge dimnishing, but hospitalizations and deaths are pretty much in line with what happened during the worst wave of last winter. The delta variant doesn’t act like that in other countries. 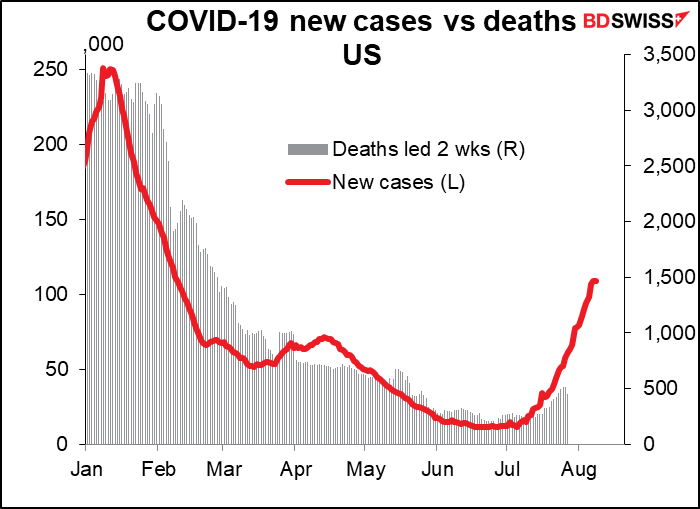 One of the theories of why this might be is waning immunity. It’s possible that the people who were vaccinated early on are losing their immunity already.

For more information I recommend this interview with the esteemed US Doctor Eric Topol:  Too Many People Are Dying Right Now

Today is one of the quietest non-holiday days I can remember with regards to indicators.

The ZEW survey is a sentiment index, not an indicator of real activity. They survey economists and analysts, not people in industry. 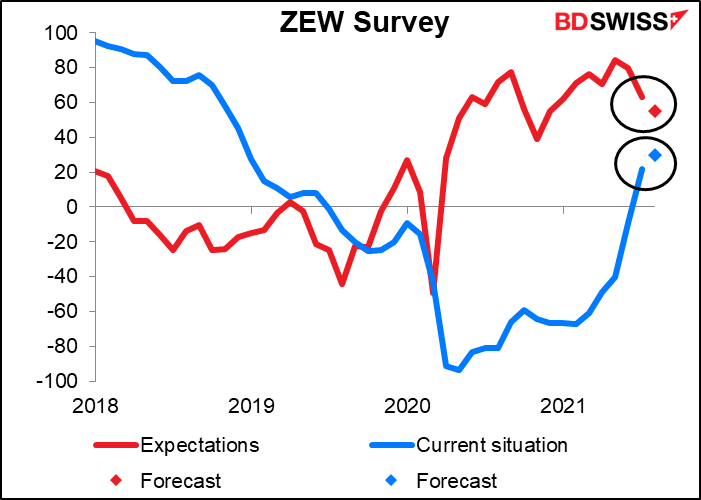 I’m not sure I care very much about this indicator. It seems to be largely a function of the DAX… 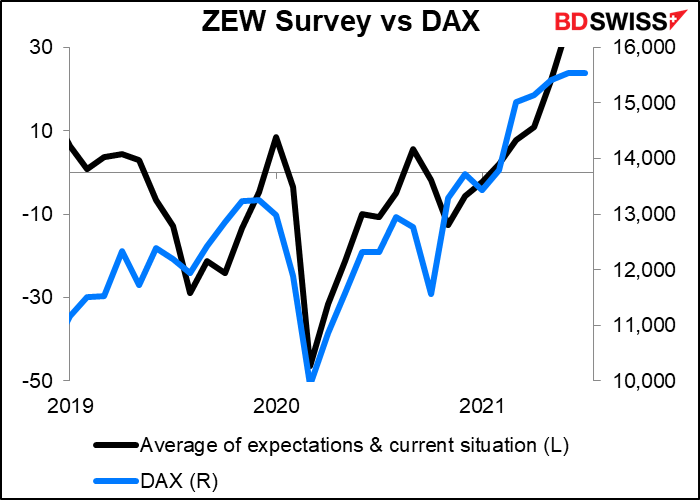 …with some influence nowadays from the lockdown. 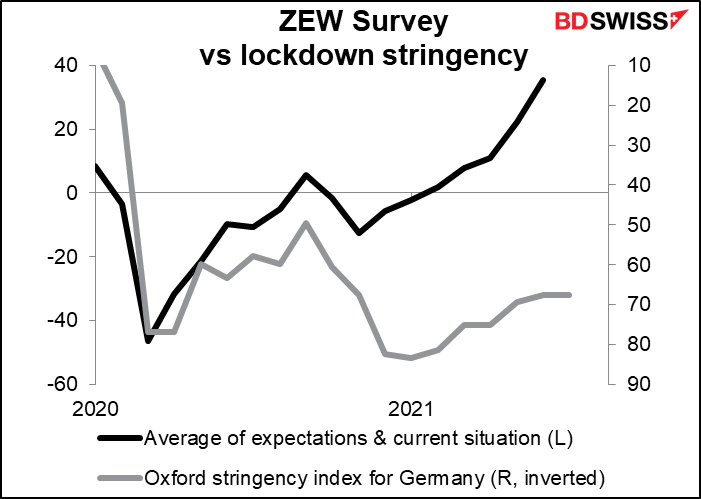 I don’t usually cover the National Federation of Independent Business (NFIB) small business optimism survey, but there’s so little else on the schedule today, I might as well. It’s expected to be down a bit. The “hiring plans” diffusion index, which is released earlier, was down one tick, but from a record high –  I think that’s significant, especially coming the day after the JOLTS survey. The “job openings hard to fill” DI, which also is already out, was at a record high this month, as was the “compensation plans” DI (not shown). These indices are all diffusion indices, which means they take the percentage of companies saying for example that they intend to hire more people (job openings are hard to fill, they’re going to raise people’s pay) and subtract from that the percent that say they’re planning on cutting employment (job openings are easy to fill, they plan to cut people’s pay). So record highs in these indices, which have a history going back to the mid-1970s, is a significant sign of a tight labor market, I’d say. 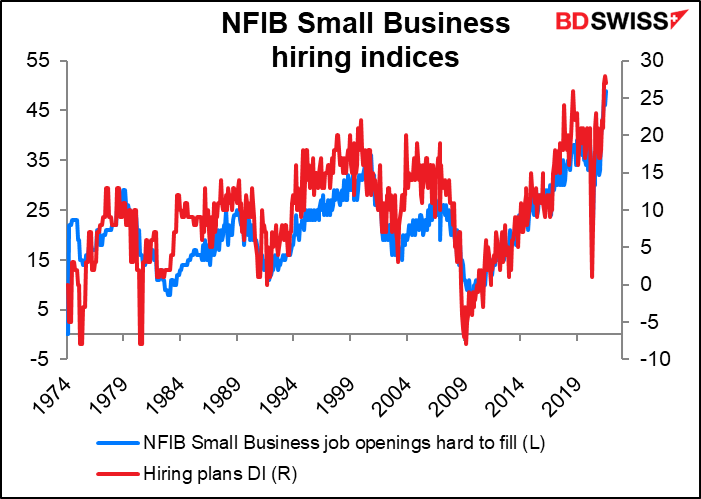 Here’s a graph of the Australian consumer confidence index. No forecast available. 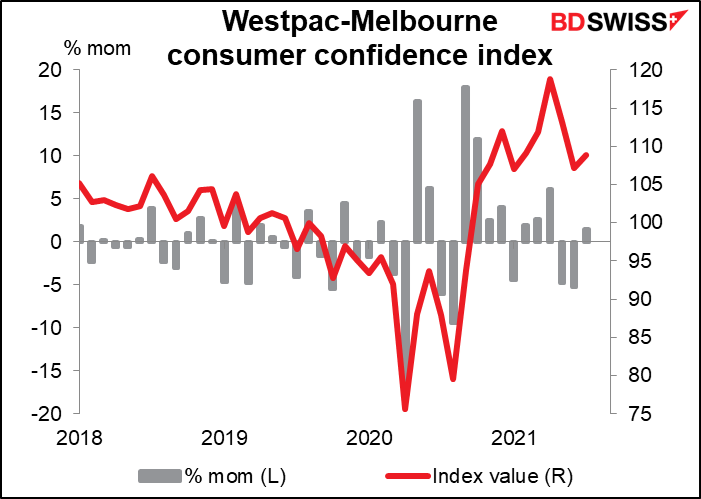 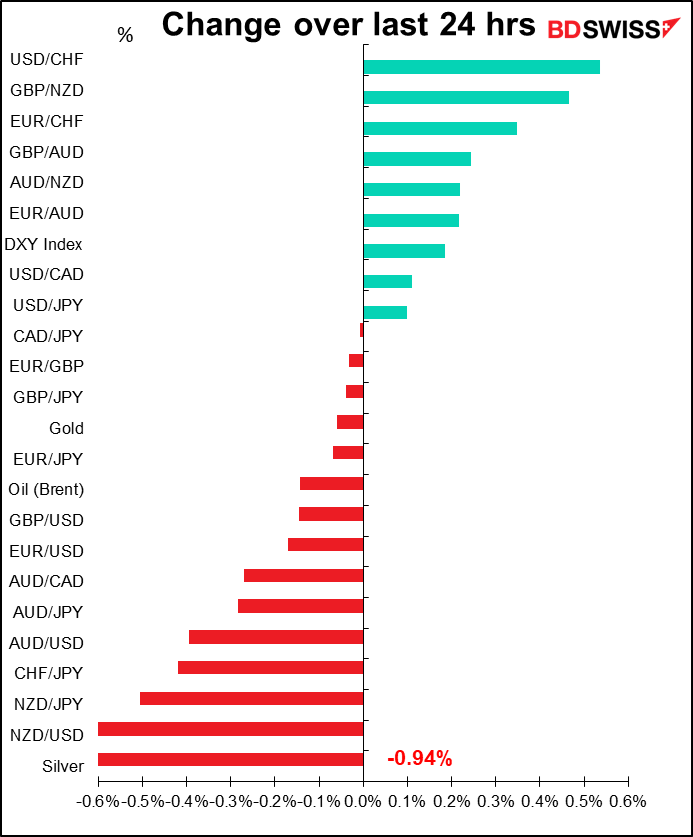