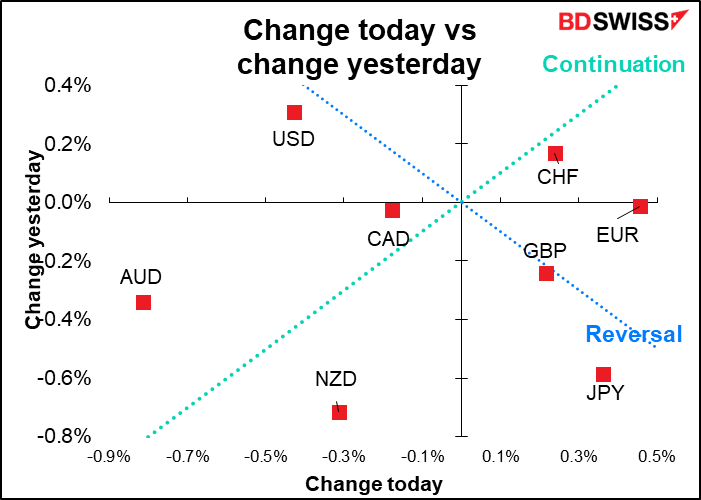 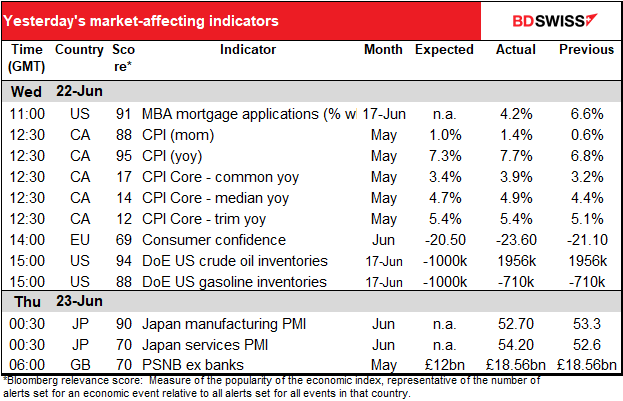 The focus yesterday was squarely on Fed Chair Powell’s testimony to the Senate Committee on Banking, Housing, and Urban Affairs (to use its proper name). His initial statement as usual didn’t say much new – the interesting stuff came out in the Q&A, as always.

Although he argued that the US economy was “very strong and well positioned to handle tighter monetary policy,” he acknowledged that it will be “very challenging” to avoid a recession while raising rates and admitted that a recession was “a possibility.” Asked if the FOMC is committed to bringing inflation under control no matter what, he responded that the Fed is “strongly, strongly committed to restoring price stability.” This is no different than what was in the Fed’s Monetary Policy Report last week, which said that “The Committee’s commitment to restoring price stability…is unconditional.” Powell was also asked if a 100 bps rate hike was possible if current measures do not work. He answered, “I think we would never take something off the table for any and all purposes,” and said that the FOMC “will make whatever moves it believes are appropriate” to restore price stability. The Fed “know we need to have restrictive policy, and that’s where we’re headed.”

This was as expected pretty hawkish stuff. 100 bps hike? Wow! So why did USD decline? Probably because the comments increased the risk of recession.

As a result, fed funds rate expectations fell, especially for the far-out months. 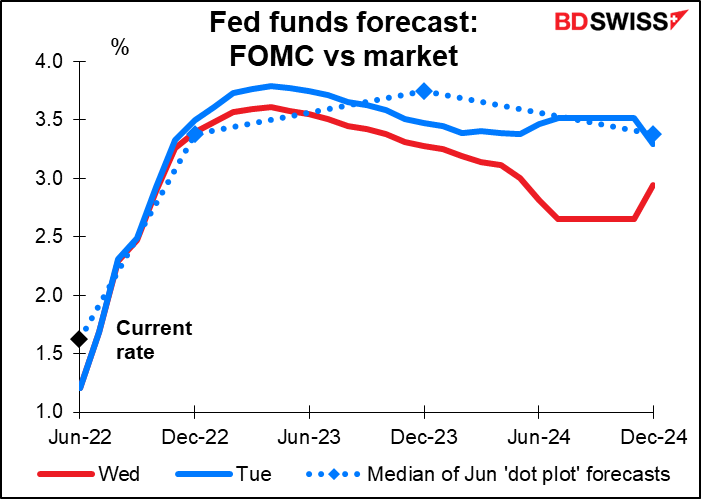 Nearly one rate hike in 2023 was taken out and two or three for late 2024, although the futures contracts there are relatively illiquid and therefore not a reliable indicator. 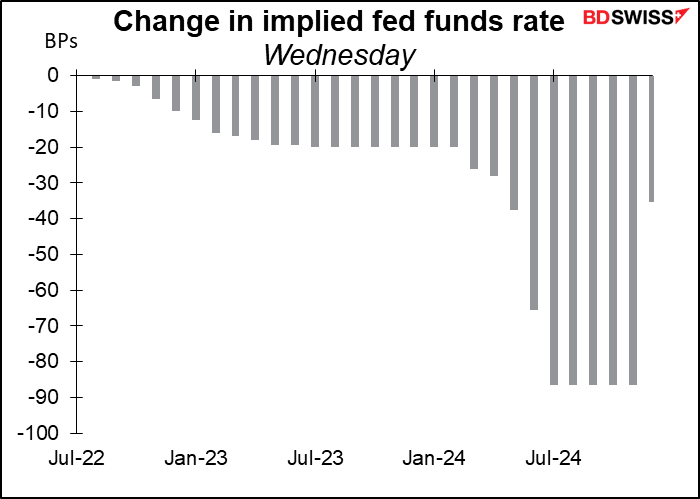 And bond yields fell around the globe.

The changes in currency values were loosely associated with the changes in bond yields, with GBP being the main outlier – it managed to rally slightly despite a major fall in bond yields. That was a noticeable movement as the currency started off the day weak after UK inflation came in slightly below the Bank of England’s inflation projections (although at 9.1% yoy it was the highest since March 1982) and pressure from core goods, a key driver of the rise in inflation over the past year, eased somewhat (core CPI fell to 5.9% yoy from 6.0% vs unchanged expected). 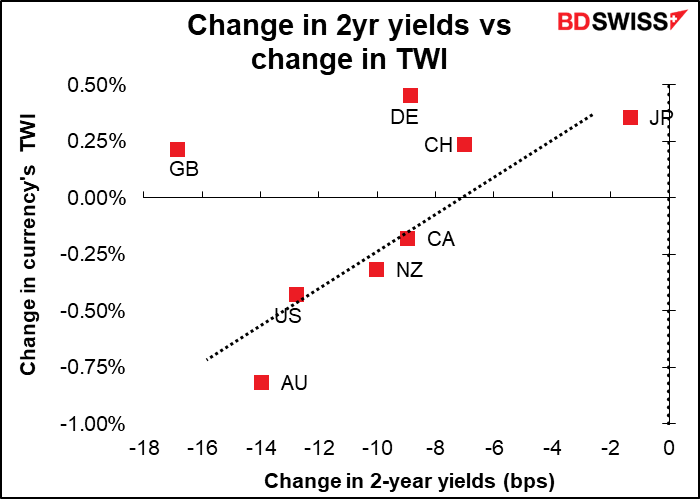 The market reduced its estimate for Bank of England tightening slightly, too. 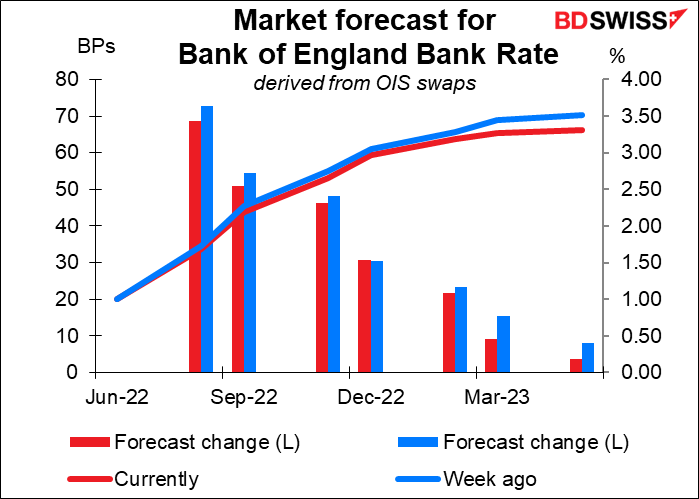 The pound’s resilience is particularly significant as GBP has been trading as a fairly “risk-sensitive” currency, rallying when global risk sentiment improves and falling when it deteriorates. The pound’s rally then as risk sentiment deteriorated and interest rate expectations fell could signal a turning point for sentiment toward GBP. As the graph shows, the correlation between GBP/USD and AUD/USD (the major “risk barometer”) has been higher than usual since the pandemic began. 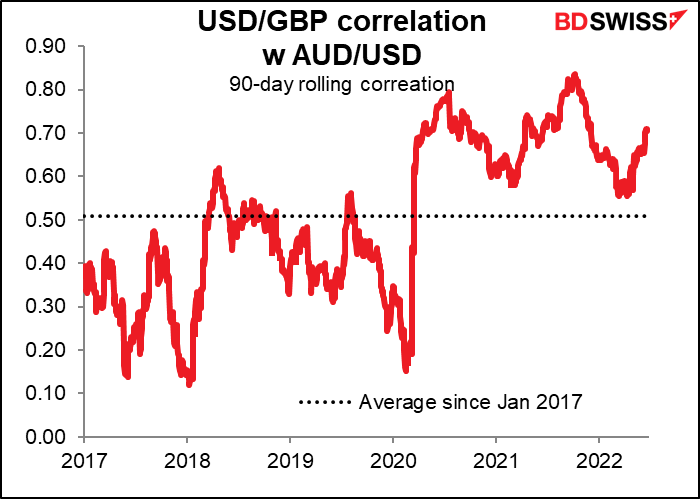 The UK has two by-elections to seats in Parliament today. Both are in seats that had been won by the ruling Conservative Party at the last election, but where opposition parties are making inroads. It’s an important test for PM Johnson after 41% of his party’s MPs voted “no confidence” in him at the start of the month. If he loses both of them, the pressure on him to resign will increase. Is that a good or bad thing for sterling? I think it’s good for the country but it could be bad for the currency as markets don’t like uncertainty. 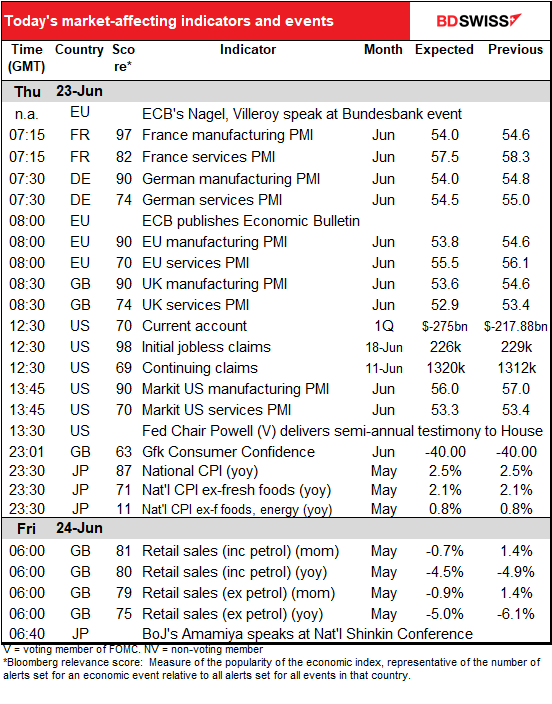 Fed Chair Powell testifies today to the House Financial Services Committee. We probably won’t get any different comments than what we got yesterday, but there could be more market-affecting headlines.

The focus today will be on the preliminary purchasing managers’ indices (PMIs) for the major industrial economies. They’re expected to be almost uniformly lower, in line with the slowdown seen in many economies recently. (The exception is the US service-sector PMI, which is expected to rise a bit.) This could dampen investors’ appetite for risky assets, such as stocks, and drag down AUD. Yet at the same time, they’re all expected to remain well above the 50 “boom-or-bust” line so not showing any signs of a recession (yet). 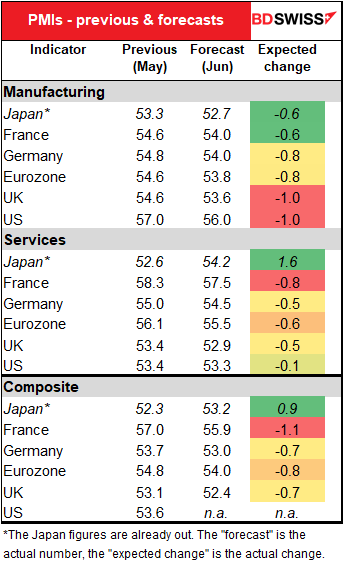 The forecasts look especially negative for GBP, which would wind up lower than the rest in both services and manufacturing. 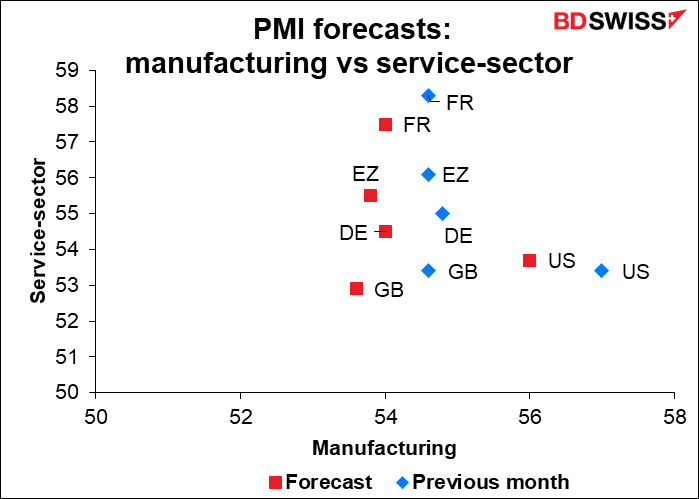 The US current account deficit is forecast to blow up, or more accurately, blow down, since it’s a negative number. Either way it’s forecast to blow way, way past the previous record of $219.87bn set in Q3 last year. This apparently doesn’t interest anyone in the markets any more so I doubt if it’ll warrant even a glance. 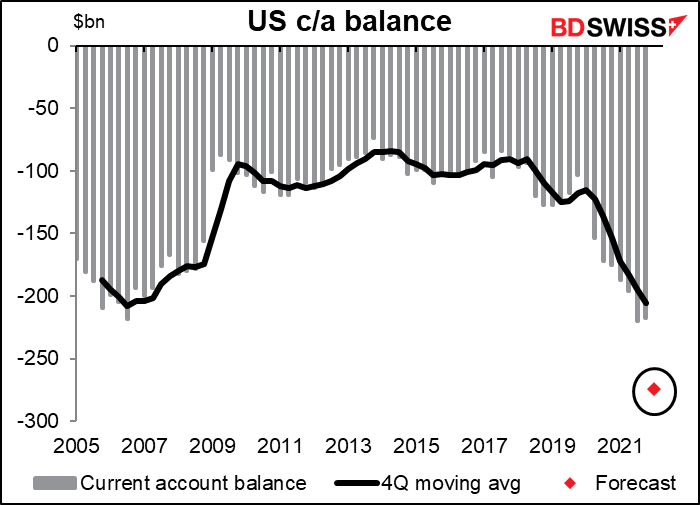 Last week’s US initial jobless claims surprised on the upside (+229k vs +218k expected). Economists are forecasting some mean reversion – a fall of 4k. 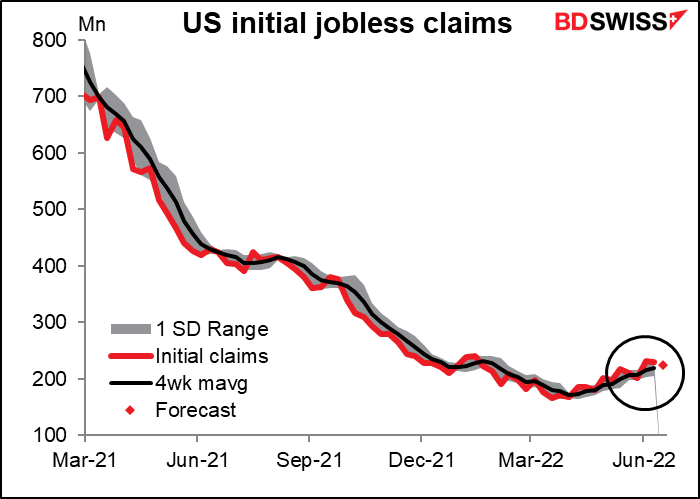 While the figures have started to turn up slightly, we should keep that in context. As you can see, the raw figures (before seasonal adjustment) are still at the low end – indeed, at the bottom — of recent experience. Also there seems to be a seasonal pattern of claims moving up now, perhaps as teachers become unemployed and file for benefits. So I wouldn’t worry about this quite yet. 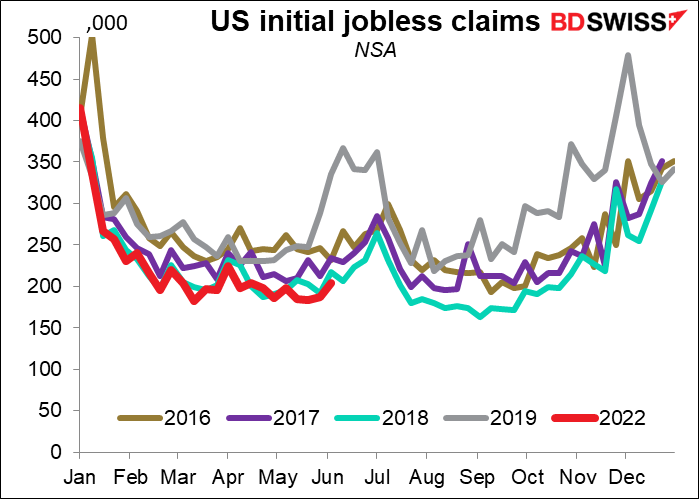 Overnight Japan releases its national CPI. For most countries nowadays this is a major market-moving event, but not in Japan! That’s because a) the year-on-year rate of inflation is expected to be unchanged, b) it’s forecast to be pretty much the same as the already-released Tokyo CPI, and c) nobody cares anyway because we just heard last week from the Bank of Japan that they’re not yet even “thinking about thinking about” raising rates any time soon. 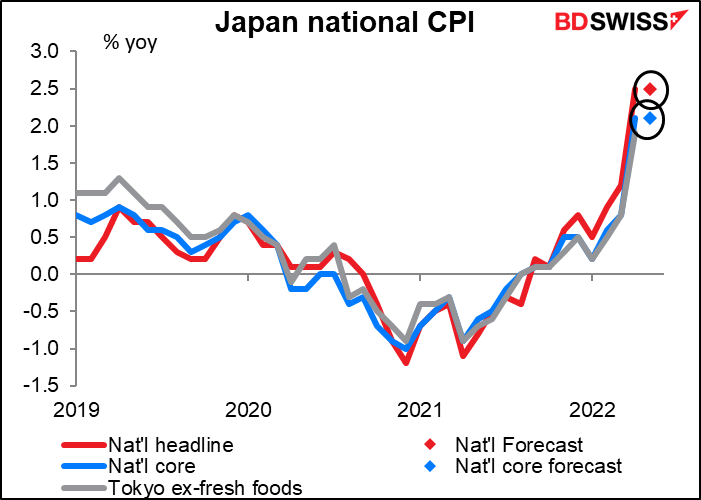 Then in the early morning Friday London time, we get the UK retail sales that we had expected to get last Friday. The Office of National Statistics said they were delaying it until the CPI was out so that they could know what to use to calculate real spending.

The market is looking for some payback after the spending spree in April. Retail footfall fell back after a bounce in April while consumer confidence plunged again. Moreover inflation is causing “sticker shock” that may reduce discretionary spending further. 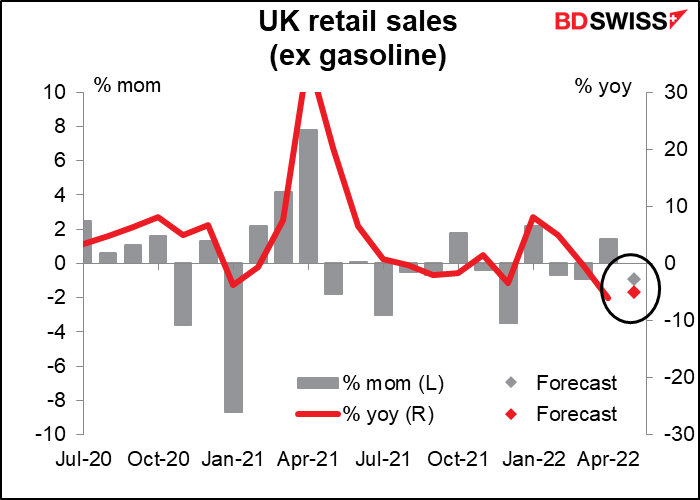 Which of the four versions (with or excluding gasoline, month-on-month or year-on-year change) should you watch? The market response seems to be similar for all of them, but it’s slightly higher – at least at the five-minute level – for the month-on-month change in retail sales excluding auto fuel. One odd point of the data – the 30-minute response is consistently different than the five-minute and one-hour responses. 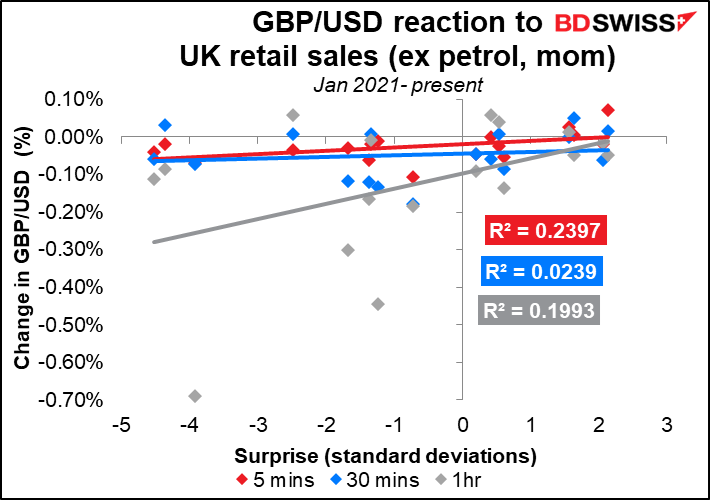 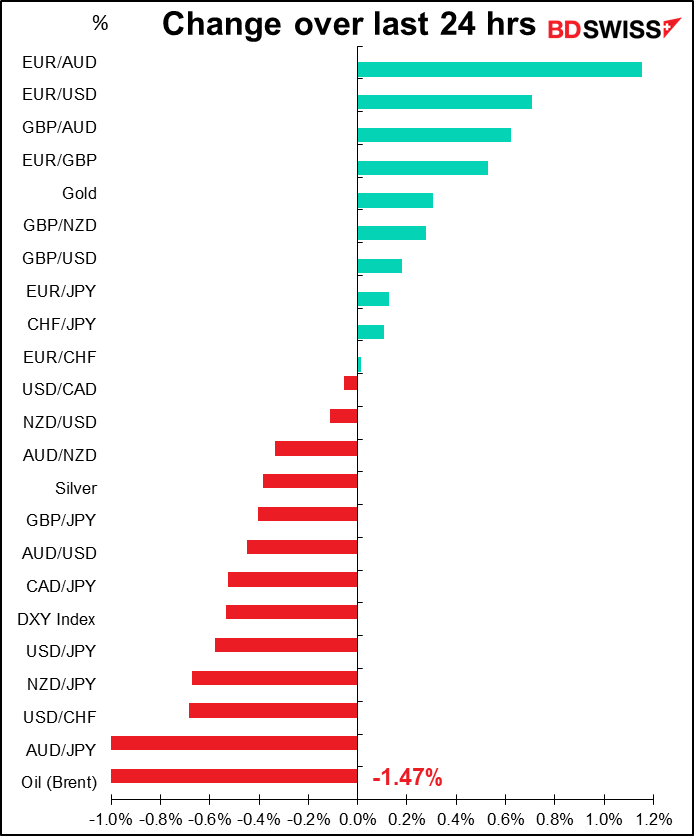 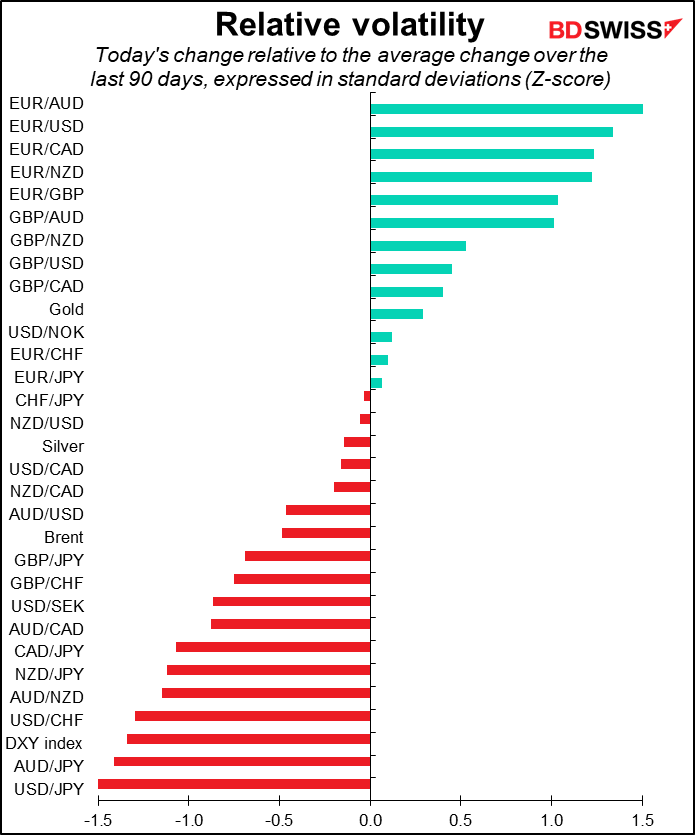