You are at:Home»MARKET PREVIEW»USD up, Commodity Currencies down; OPEC+ Meeting, JOLTS program 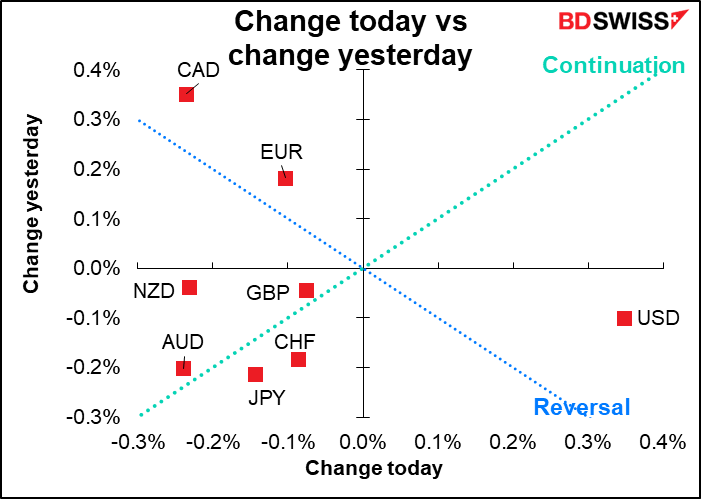 Welcome to 2022! I must say, it looks remarkably like 2021 did at the end there. COVID-19 is still rampant, inflation is still too high, and exchange rates haven’t reached equilibrium yet (fortunately for my business).

How did currencies do last year?

This graph shows the spot return of the currency vs USD and the total return (that is, including interest) on the Y-axis. The graph is a tiny bit misleading in that the “total return” side should in theory subtract the cost of borrowing the USD in order to make the trade (i.e., use the swap rate for the currency, not the deposit rate). Nonetheless that would only shift the “total return” side down by 0.18 percentage point across the board and not affect the order any. (that’s also why the USD itself is in the chart – it’s just the interest accrued on a USD deposit.)

The thing to note here is that the order of the currencies is the same in both “spot” return and “total” return. That is, the interest income from the currencies wasn’t enough in any case to affect the ranking of the currencies. That’s because interest rates among the G10 were all uniformly low – they ranged from a “high” of 0.43% (NZD) to a low of -0.71% (CHF), with a median of +0.04%. Against that, the spot returns ranged from +0.62% (CAD) to -10.3% (JPY). Interest return wasn’t significant. 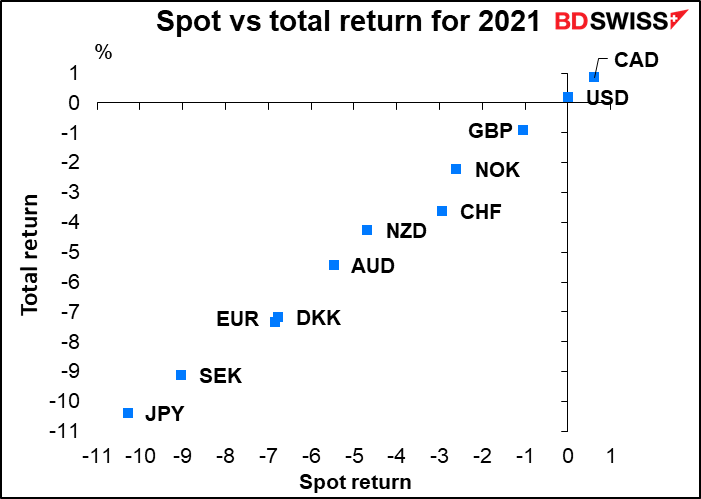 That wasn’t the case for emerging market currencies, but I’ll deal with that in a separate piece. Meanwhile you can see it in my video, How did currencies do in 2021?

How about for 2022? This is what the market is predicting for spot returns. 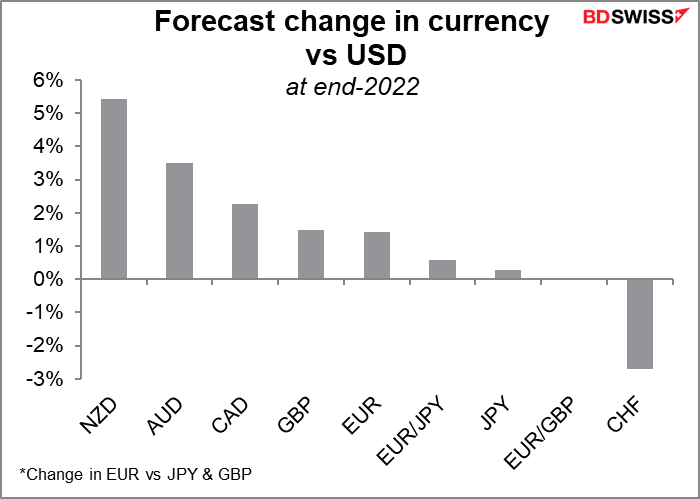 Stock markets yesterday certainly continued on the pattern from 2022.  Following the astonishing 29.6% rise in the S&P 500 during 2021, the index rose another 0.64% to yet a new record high, as did the STOXX 600 (+0.45%). Futures indicate further gains today. At this rate I might be able to retire sometime this century! Oil also rose despite today’s impending OPEC+ meeting, which is likely to raise oil production by 400k barrels a day. That’s probably because the group’s technical committee yesterday cut its estimate of the market surplus for next year (see below for details).

Nonetheless the reaction in the FX market wasn’t what one might have expected. The commodity currencies, which usually react positively in a “risk-on” environment, were at the bottom of the table while USD, a supposedly “safe-haven” currency, was at the top. 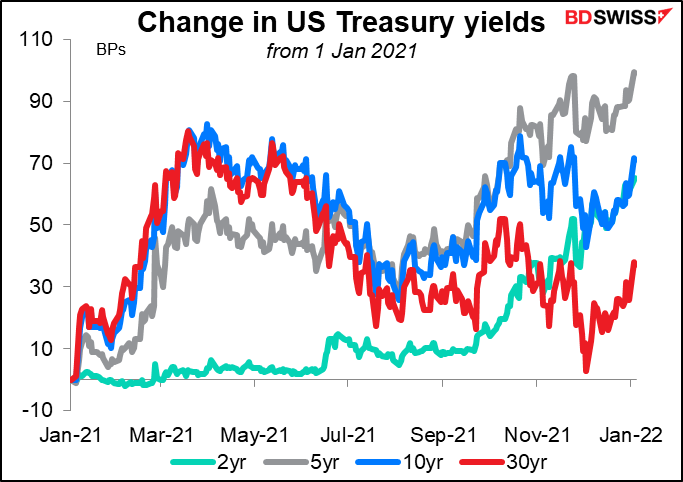 The rise in yields was probably due to a big rise in inflation expectations in the US. Until recently the impact of the virus has been deflationary as governments responded with lockdowns and restrictions that dampened economic activity. However in the US that’s now politically impossible, thanks to widespread opposition to such measures. As a result the virus is now likely to be inflationary as demand continues as usual but supply is constricted because so many workers are out sick. 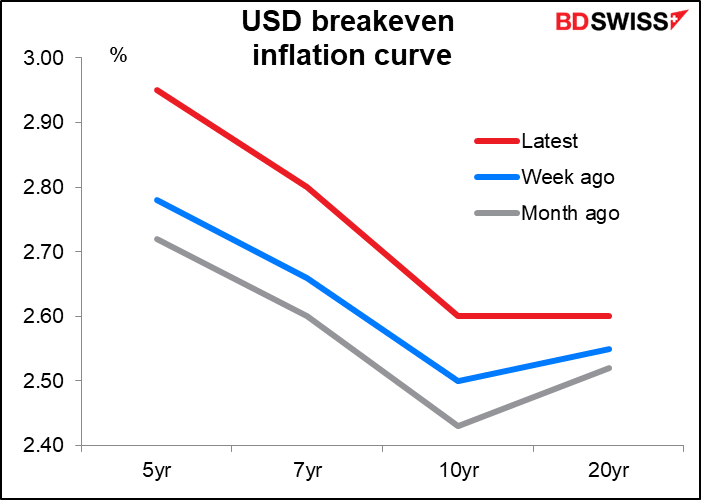 For example, here’s what today’s New York Times had to say on the matter: 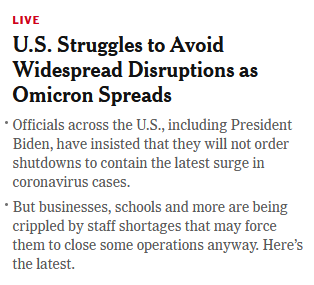 Higher inflation in the US would give the hawks on the Fed more reason to argue for an early tightening of policy. Already the market sees a 61% chance of a rate hike by March.

It was notable that despite the rise in inflation expectations, gold and silver were lower. Gold is apparently moving in response to interest rate expectations, not inflation expectations. As bond yields move up, gold – which doesn’t pay any interest – becomes less attractive. That aspect seems to be outweighing gold’s traditional function of a hedge against inflation – perhaps a vote of confidence in central banks’ ability and willingness to control inflation ? 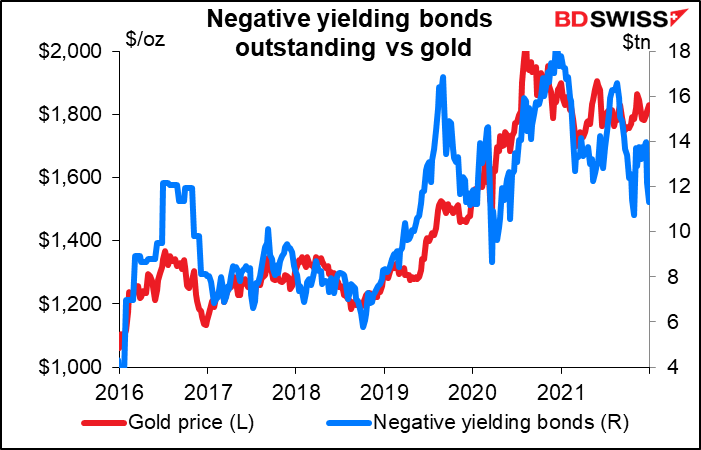 The CoT report showed only minor adjustments to speculators’ positions. The only sizeable change was a cut in GBP shorts. Specs als cut their EUR shorts but added to NZD, MXN, CHF, and (slightly) AUD shorts. 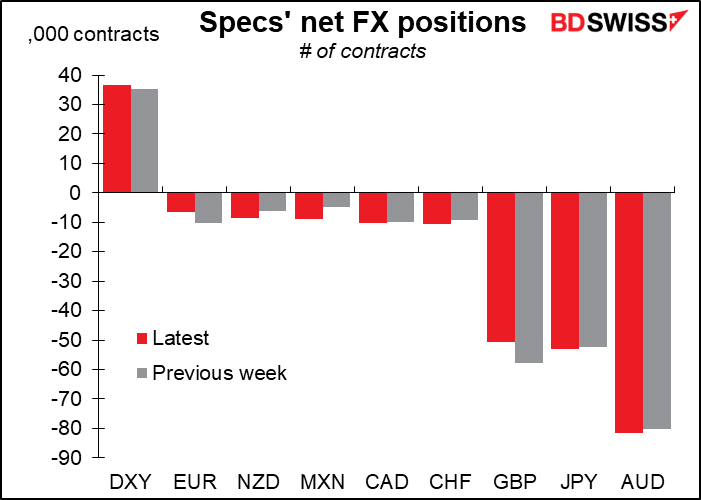 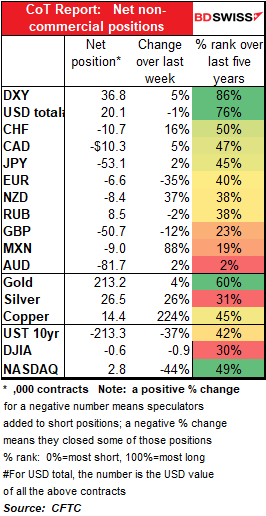 Alas, a story that I read in what I took to be a paper of fine and upstanding repute, The Daily Mail, proved to be incorrect. According to the Associated Press’ fact-checking, NASA did not hire 24 theologians “to assess how the world would react if we discovered alien life.” I’m deeply disappointed because I (and many other people, apparently) thought that this might presage what would certainly be The Biggest Story of 2022.

This just goes to show that you should take steps to inoculate yourself against the gullibility virus, which circulates virtually unimpeded on the internet.

Also, Florida Gov. Ron Desantis finally appeared in public, squashing rumors that he was lying comatose in a hospital somewhere. He and his wife showed up at a concert. He said he had been staying with his wife, who was receiving treatment for breast cancer. If so, one wonders whether attending an indoor concert without wearing a mask is a good idea for an immune-compromised person like her, but that’s none of my business. 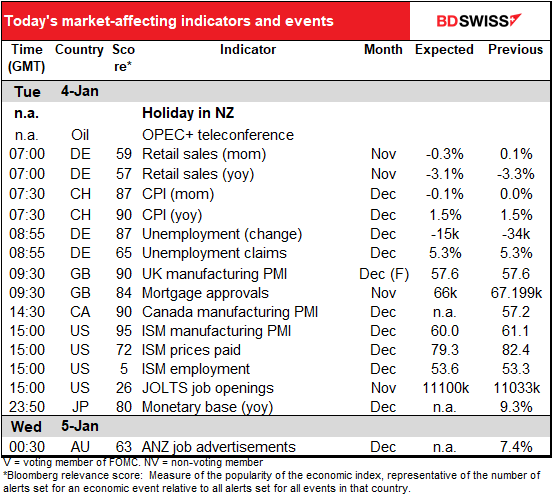 As I said yesterday, “the days are just packed” this week.

Today there’s a meeting of the oil ministers of OPEC+, which consists of the 13 countries of the Organization of The Petroleum Exporting Countries (OPEC) plus 11 other major oil exporters, notably Russia, Kazakhstan, and Mexico. OPEC accounts for around one-third of the world’s oil supply; the other members of OPEC+ bring it to slightly below 50%.

After the pandemic hit in 2020 the group agreed to cut back its oil production dramatically; now they are raising it back up at the rate of 400,000 barrels a day (b/d) every month. The question to address today is, do they go along with this pre-determined increase, reduce it, or pause altogether? Last month they considered not raising by the full 400k b/d to protest the decision by several major oil-consuming countries to release oil from their strategic petroleum reserves, but in the event they went ahead and raised by the full amount.

Yesterday there was a meeting of the group’s Joint Technical Committee, which predicts supply & demand ahead of the ministerial meetings. They cut their forecast for the market surplus in Q1 by about 25% to 1.4mn b/d, saying that they see only a “mild and short-lived” impact from the omicron variant.

Since they didn’t refrain from hiking production last month and this month they cut their forecast for the market surplus in Q1, I think it’s pretty likely that they raise output by the scheduled 400k b/d again today. With Brent now 15% higher than it was the day before their last meeting (on Dec. 2nd), it’s clear that the market is in short supply. Brent rose 50% during 2021 so even if it’s down from its October high they can be pretty happy with what they’ve accomplished. 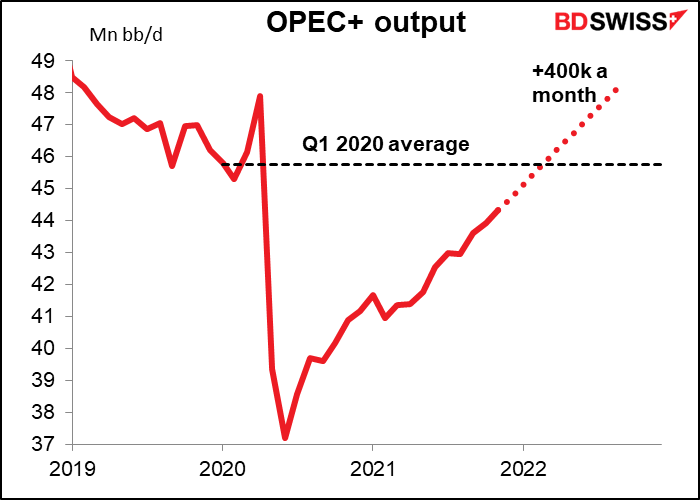 As for the indicators, we already discussed German retail sales and Swiss consumer prices yesterday.

German unemployment is expected to fall a bit, but not enough to make the unemployment rate budge. Or maybe the participation rate goes up. In any case I don’t think this will be exciting enough to get people buying or selling EUR today. 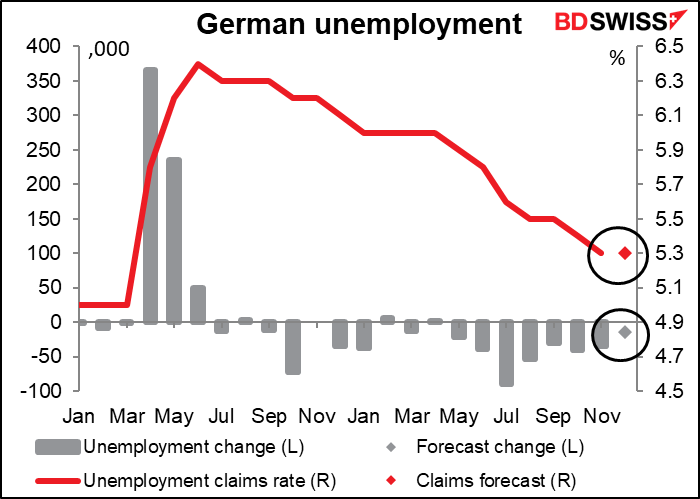 UK mortgage approvals are forecast to decline further. The forecast 66.0k approvals would still be a touch higher than the 65.4k average for 2018-2019, which is pretty astonishing considering the house-buying boom that occurred thanks to the Stamp Duty holiday from July 2020 to end-September 2021. I wouldn’t be surprised to see approvals fall further over the coming months. In 2018 there were 781k mortgages (adding up the seasonally adjusted and 789k in 2019; assuming the November forecast is correct, that will make 873k so far in 2021 and there’s still one month left in the year. So I don’t think a decline says anything about the health of the housing market, just that a lot of purchases got brought forward and now there’s likely to be some backsliding. 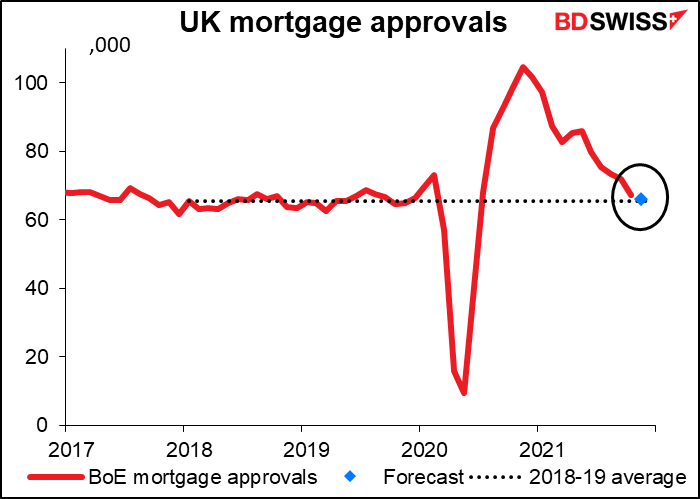 We usually get the Institute of Supply Management (ISM) version of the manufacturing purchasing managers’ index (PMI) on the same day that the final Markit version comes out, but not this month.The ISM version is expected to fall slightly, which wouldn’t be a surprise given that the Markit version declined 0.6 point over the month. 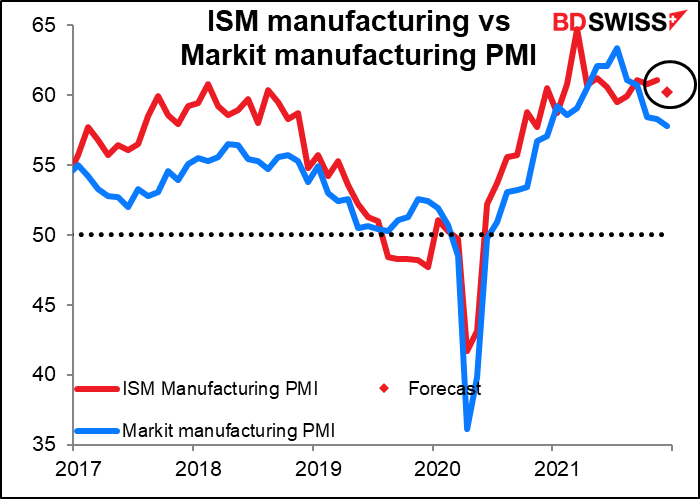 Openings hit a record high in July and came down somewhat since then, but not as fast as the number of unemployed persons has declined. Meanwhile, the forecast for November is for openings to be back up at 11.1mn, slightly above the previous record of 11.098 This suggests that the (relatively) sluggish rate of new job creation is because people don’t want to work, not because there aren’t any jobs for them. (Or at least, they don’t want to work given the pay & conditions that are available.) 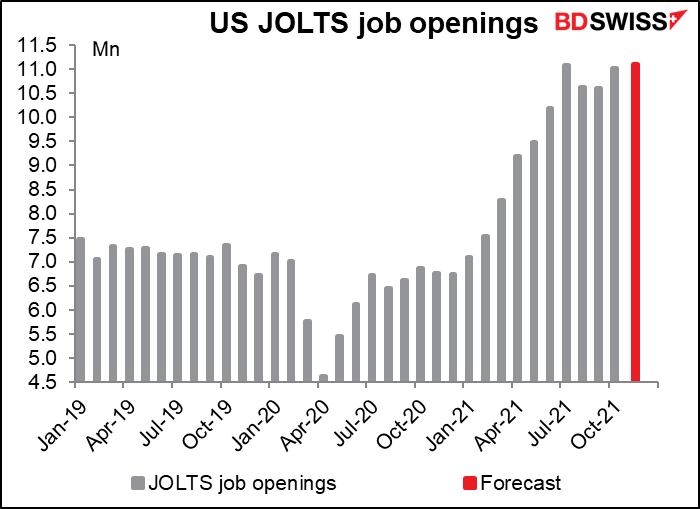 People often look at the JOLTS job openings in relation to the number of unemployed people, the equivalent of Japan’s “job-openings-to-applicants-ratio.” This hit a record high of 1.49 last month, again suggesting that anyone who wants a job can get some kind of a job. With the number of unemployed falling steadily, the ratio is expected to leap even higher to 1.62. Before the pandemic, the highest it ever got was 1.24. The large number of available jobs relative to available people suggests that anyone who wants a job can get one and therefore will provide more ammunition for those on the FOMC who would argue that the US is at or near “maximum employment” and therefore doesn’t need rates to remain at zero. 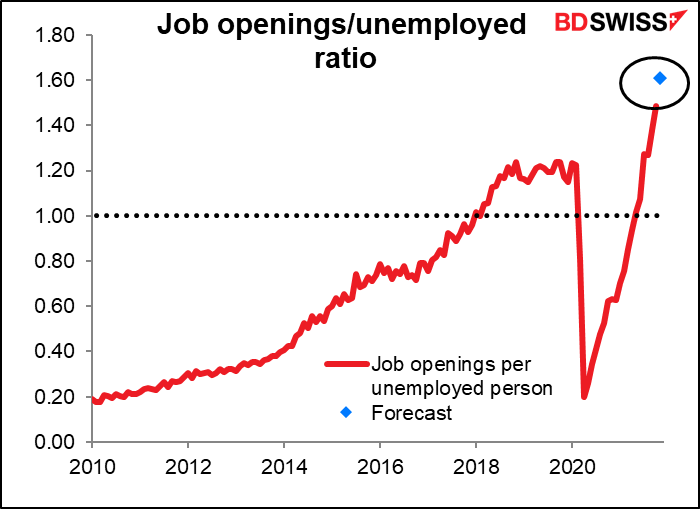 The market also pays attention to the quit rate, the percentage of people who voluntarily leave their job every month (the “take this job and shove it” rate, one might say). (No forecast available.) That hit a record high in September but has since come down a bit. Still, it remains well above its pre-pandemic peak. If the quit rate rises further or even just stays the same, it’ll be further proof that the labor market is quite healthy and bolster the case for those on the FOMC who want to see an early rise in rates. That would be positive for the dollar. 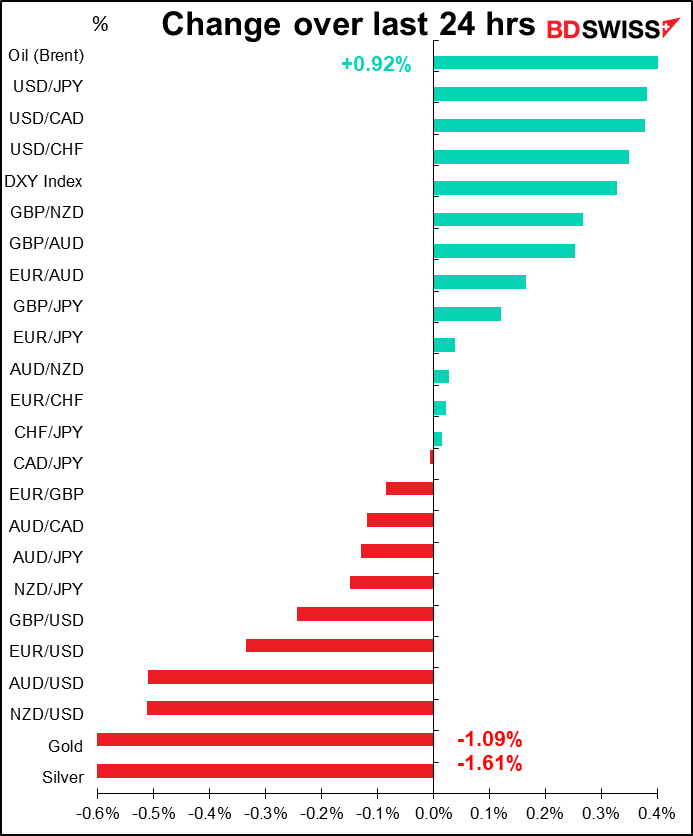