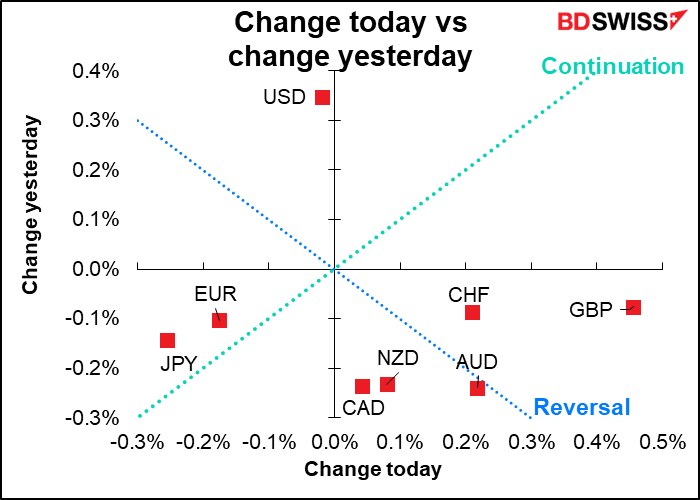 GBP was the clear standout yesterday, with no particular obvious trigger. It jumped at the start of UK trading as traders there got back after the holidays, then started rising again from around 12:30 GMT. I couldn’t see any announcement or news or anything to cause the rally. On the contrary, a stunning 225,760 new cases of the virus – up 20% from the previous day and 175% from a week earlier—is pretty bad. 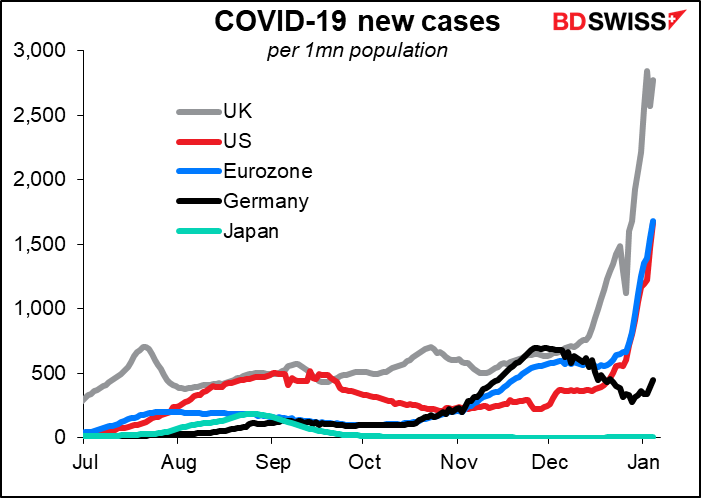 The surge in GBP came about an hour before a statement by a UK government spokesman who said the UK government sees nothing in the data to suggest the need for further COVID-19 regulations. He pointed out (correctly) that while new cases were soaring, they appear to be less serious than before – fewer people requiring ventilation, for example. PM Johnson later (17:00 GMT) gave a press conference in which he said that Britain can “ride out this Omicron wave without shutting down our country once again.” He plans on continuing with the current relatively light measures, called “Plan B,” which were put in place in early December.

Judging from the Oxford Stringency Index, a measure of how tight the anti-virus restrictions are, the UK is extremely loose, on par with insouciant Japan and even below the “don’t tread on me” USA. The loose restrictions suggest that the UK economy will continue to chug along, but with more and more people getting sick and staying out of work, wage pressures and inflationary pressures are likely to rise. The inflationary implications of a relaxed virus policy make further Bank of England tightening quite likely. 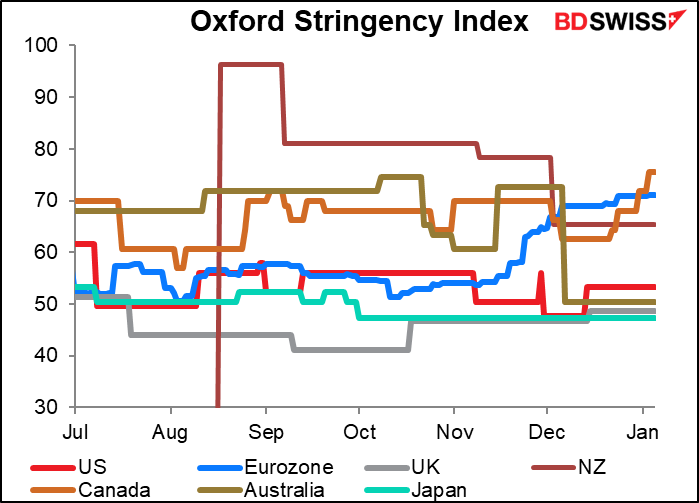 Elsewhere, it doesn’t seem that markets are that concerned about the virus as the equity rally continued. The S&P 500 and Euro STOXX 600 both moved further into record territory, with cyclical sectors generally outperforming. “Reopening” stocks, such as travel and leisure, performed well. The STOXX 600 Travel & Leisure index was up 3.5% yesterday – it’s already recovered from its Omicron dip. Bond yields also moved higher. 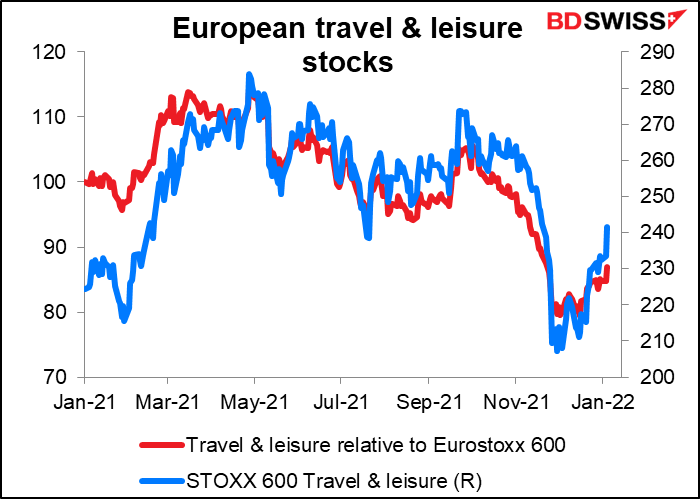 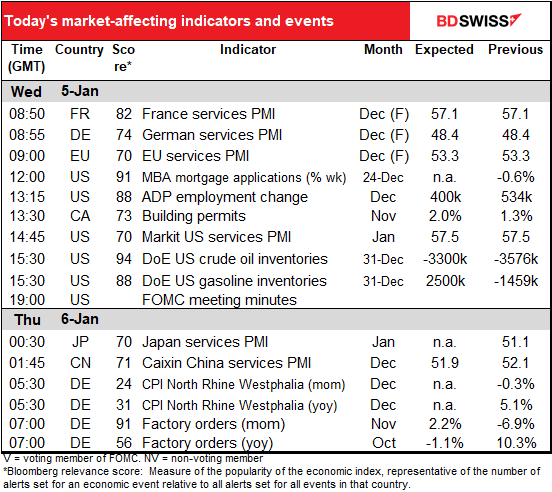 The day starts out with the final service-sector purchasing managers’ indices (PMIs) for the major industrial countries. Usually these are not revised too much.

The big event of the day is the ADP employment report. Automated Data Processing Inc. (ADP) is an outsourcing company that handles about one-fifth of the private payrolls in the US, so its client base is a pretty sizeable sample of the US labor market as a whole. It’s therefore watched closely to get an idea of what Friday’s US nonfarm payrolls (NFP) figure might be.

One point to note:  the ADP adjusts its figures to match the final estimate of the NFP’s reading on private payrolls. It is therefore two steps removed from the headline figure that everyone focuses on, which is the initial figure for total payrolls, including government workers. So while it’s one of the best guides to the NFP that we have, it’s not perfect by any means – in fact, neither is the NFP figure itself, since it’s always revised.

The four-week moving average of initial jobless claims fell about 70k from the November survey week, so continued improvement in the labor market is likely. The forecast of +400k would be considered good nowadays, I think. In any case it would be much better than last month’s +210 on overall NFP and +235k on private payrolls. No one expects blowout 1mn new jobs a month anymore anyway, simply because there don’t seem to be that many people who want to get a new job nowadays. 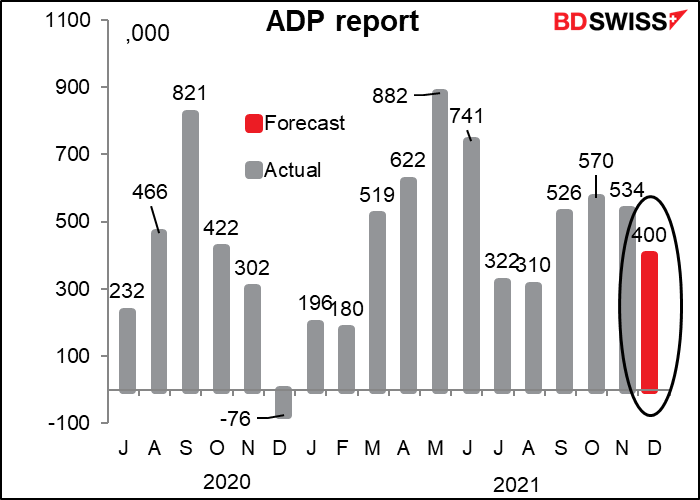 The other feature of the day are the minutes of the December FOMC meeting. Market participants will pour over them like monks lucubrating over a precious incunabulum to divine the thinking behind the decision to speed up the taper and especially to signal three rate hikes in 2022 vs none before. They will also scrutinize the text to see if they can discern any hints, suggestions, indications, or adumbrations as to the timing of the subsequent moves that will sooner or later follow the end of tapering, namely “lift-off” (the first rate rise) and then the shrinking of their balance sheet as they stop reinvesting maturing bonds.

In the last cycle this process took several years – they started tapering in December 2013, started hiking rates in December 2015, and started letting their balance sheet roll off in Oct. 2017. 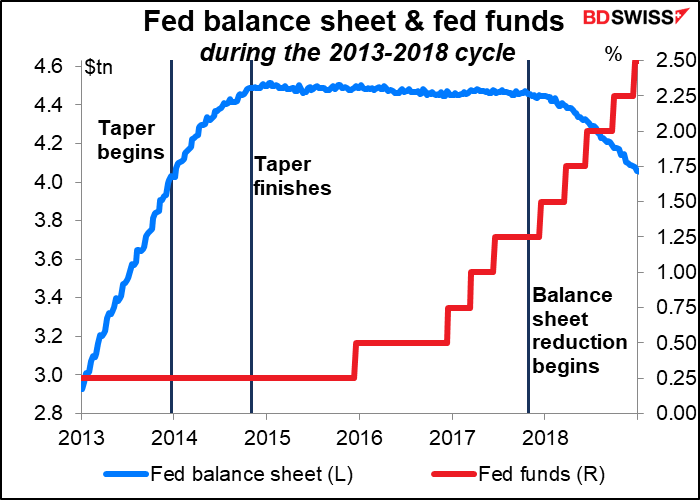 But as Fed Chair Powell has pointed out, the economic conditions then were very different than they are now. Inflation then was well behaved and if anything below the 2% target until they started shrinking the balance sheet – in contrast, it’s currently 6.8%, the highest since the early 1980s. Similarly, they didn’t start shrinking their balance sheet until the unemployment rate was 4.1% — currently it’s 4.2%.  With inflation well above target and the unemployment rate almost at target, there’s no need to stick with the previous playbook. Indeed, there was a story in the Wall Street Journal yesterday that said Fed officials are considering whether to reduce their bond holdings relatively quickly after tapering ends. 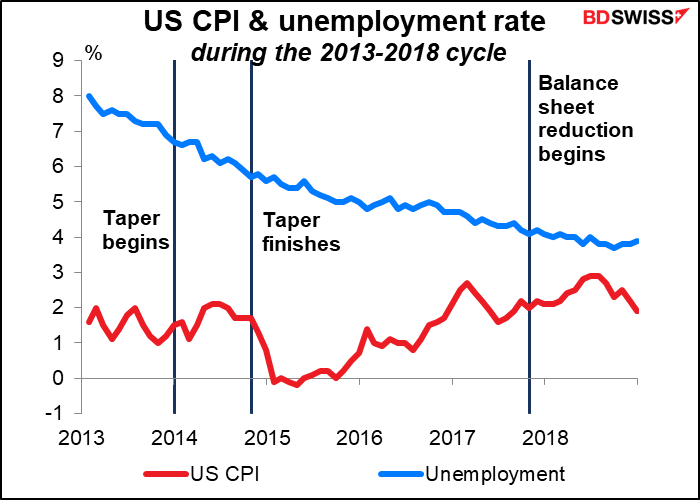 Then tomorrow morning, bright and early, we get the consumer price index (CPI) from Germany’s largest state, North Rhine Westphalia. It has a good but not perfect correlation with the national harmonized index of consumer prices (HICP), which will be announced later on in the day. As the graph shows, the trendline is a little steeper than the 450 line, meaning the month-on-month change in the national HICP tends to be a bit more volatile than the NRW CPI. 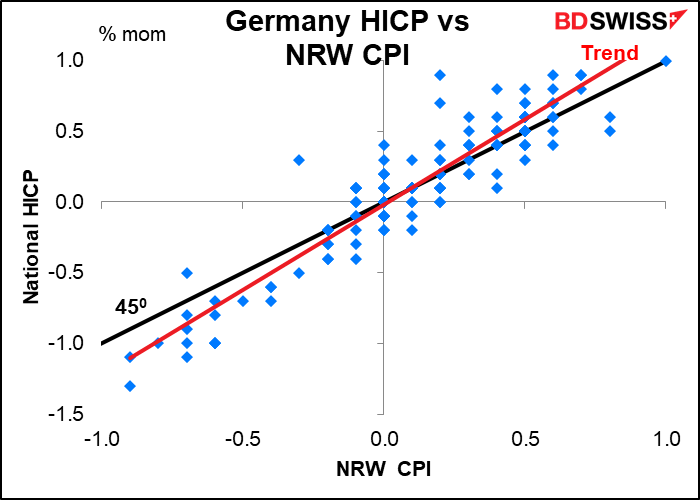 Although the year-on-year rates are almost identical. 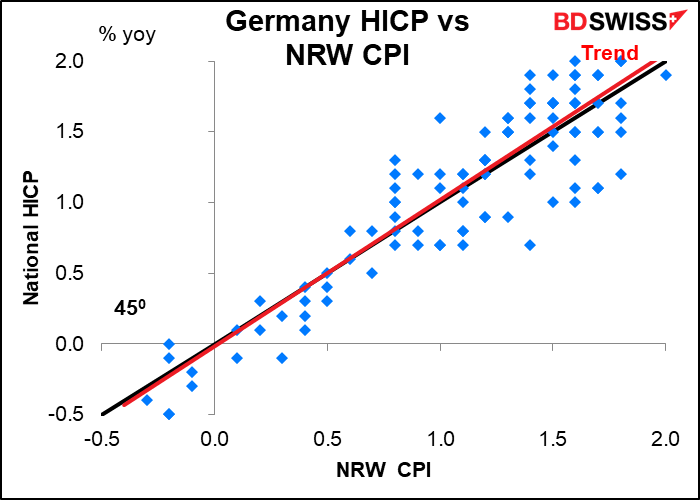 A bit later and Germany announces its factory orders. They haven’t been doing very well recently – the six-month moving average of the monthly mom changes is -1.3%. But they’re expected to perk up a bit this month. 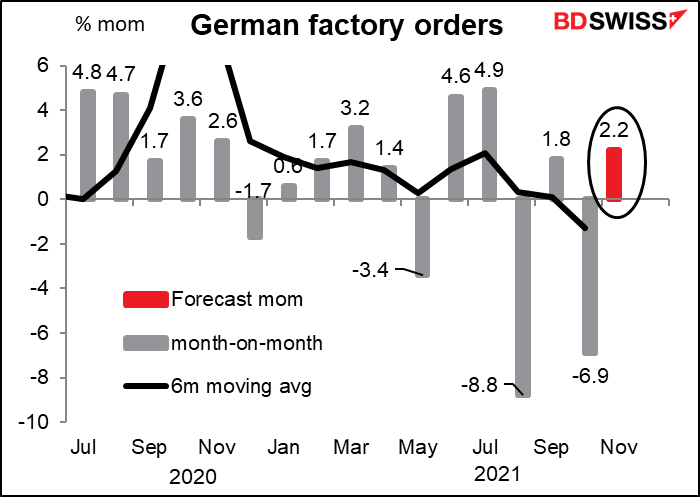 The expected decline in the yoy rate of growth is in accord with the slowdown in the German manufacturing PMI. 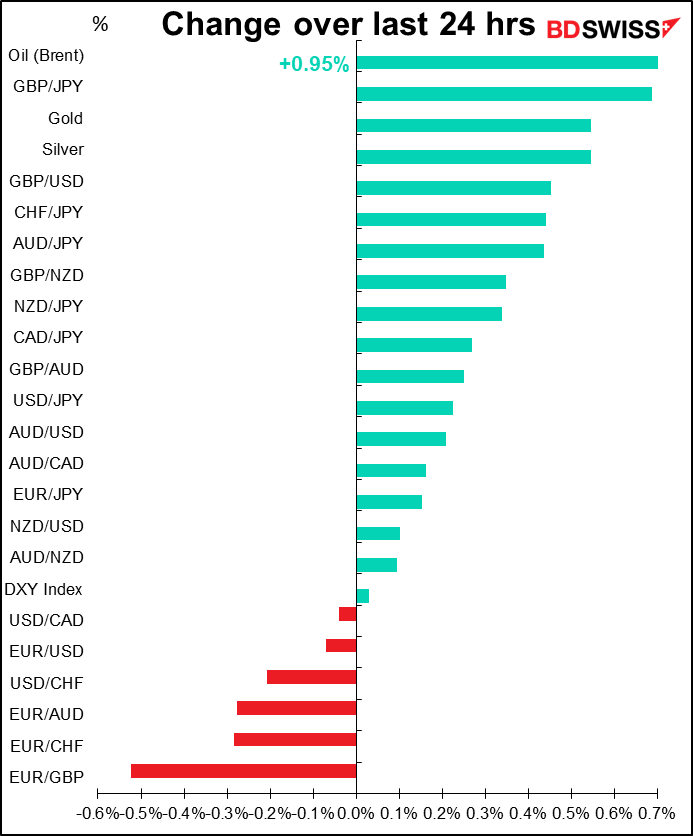