You are at:Home»MARKET PREVIEW»CAD continues to Lead the Pack; Manufacturing PMIs 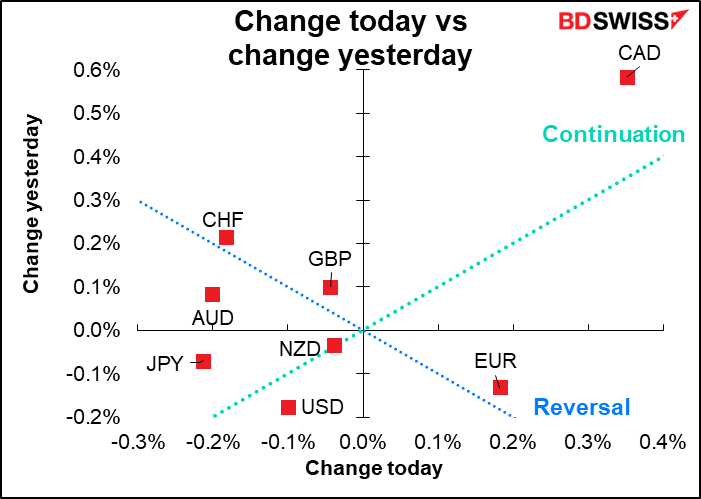 Today is still a holiday in many many countries, so I’m just going to stick to the script today. Tomorrow we’ll go through more “welcome to 2022” and a brief review of how the markets moved in 2021.

CAD continued its rally. This is most significant, given that oil was down 0.9% and the other two commodity currencies were down. CAD seems to have broken away from oil and indeed the commodity complex for the time being.

It’s nothing new today. We discussed this Friday when it was also the only thing going on in the market. Since then things no big change in anything that I can see. 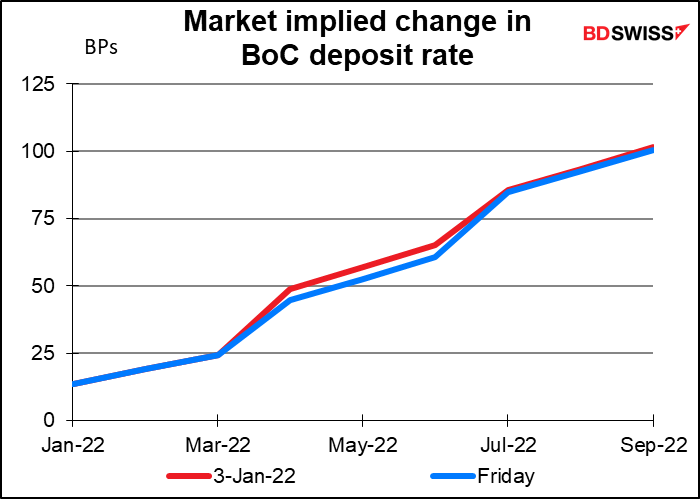 And if anything, the yield pick-up of US Treasuries over Canadian bonds has been increasing recently on both a hedged- and unhedged basis. I can only assume that it’s a  momentum trade – people are buying what’s going up.

I haven’t run the numbers myself but I remember reading that one strategy to start the year off with that has a fairly good hit ratio is to buy the previous year’s worst-performing currency and sell the previous year’s best-performing currency. In this case it would mean selling CAD/JPY. I can’t imagine why that would make sense in this case except for the “crowded trade” idea: that long CAD and short JPY are both crowded trades likely to reverse during the year. In this case though that’s not true – CAD in particular isn’t crowded at all, while specs have been cutting their JPY shorts for a few weeks now. We’ll know better tonight when the new Commitments of Traders report comes out. 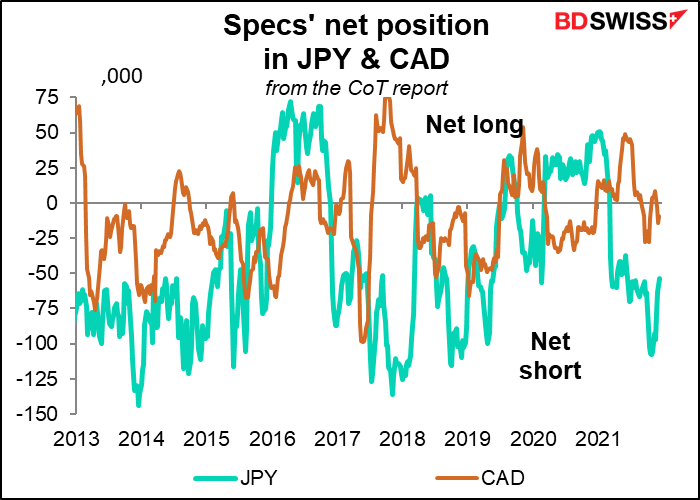 After last week’s pleasantly somnolent market, this week is much much busier. Alarmingly so! We have the manufacturing purchasing managers’ indices (PMIs) today and the service-sector PMIs on Wednesday. A few countries, such as Japan and Britain, are on a different schedule because of their prolonged New Year’s holidays, as are the US Institute of Supply Management (ISM) PMIs, which come out a day later than the Markit versions.  It’s also the first week of the month so we have the ADP report Wednesday and US nonfarm payrolls Friday. And yet we also get the Job Offers and Labor Turnover Survey (JOLTS) program, a second-week indicator, tomorrow. US durable goods and factory orders come out Friday too; usually factory orders come out several days later with the final durable goods figures. Two Commitments of Traders reports – one tonight for last week then the usual one on Friday. German CPI on Thursday and EU-wide CPI on Friday, plus Tokyo CPI Friday as well. Also German factory orders Thursday and industrial production Friday. And there’s an OPEC+ meeting tomorrow and the minutes of the December FOMC meeting Wednesday. As Calvin of Calvin and Hobbes famously said, “The days are just packed.”

The preliminary PMIs from the major industrial countries were clustered fairly closely. The outliers were Japan, both manufacturing and service-sector; and UK services, no doubt thanks to “Plan B,” a set of restrictions implemented in the beginning of the month. We’ll be interested to see how the rest of the world fares. Is manufacturing coming back? That would suggest the blockages and supply chain disruptions might be ending. The Caixin China manufacturing PMI is due out overnight. It’s expected to be 50.0, right on the “boom-or-bust” line. So was the official version, and that came out slightly higher (50.3). The Caixin version focuses more on export-oriented companies and so is more sensitive to international conditions. 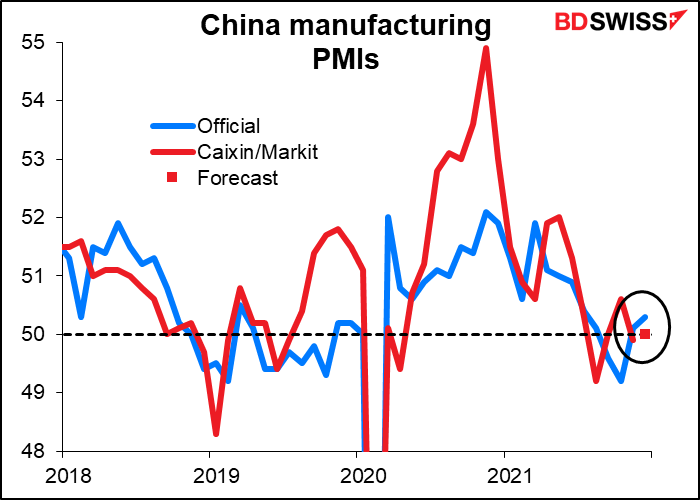 EUR/CHF has been pretty steady and sight deposits have actually fallen a bit for the last two weeks. That suggests the pair may have stabilized without “supernatural activity” in the market. Will they fall again in the latest week? 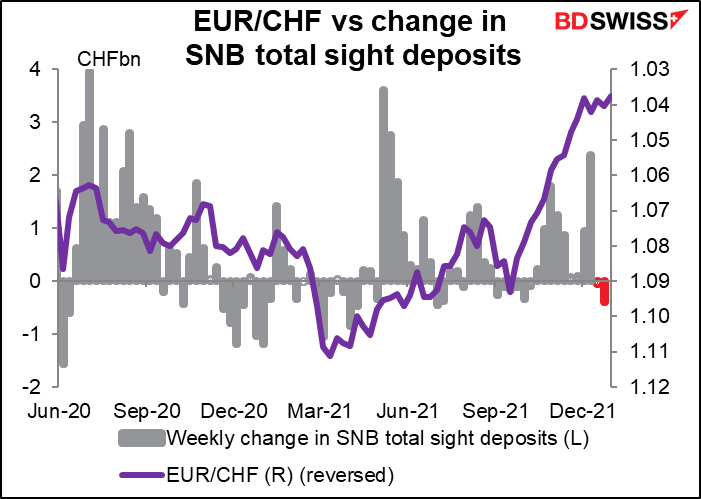 Speaking of Switzerland, early tomorrow morning as the cows begin to graze on the slopes in the Alps (actually they’re tucked safely away in barns in the valleys this time of year) we get the Swiss consumer price index (CPI). I’m not sure how much of an impact this has on CHF however. Monetary policy has been on hold since 2015 so unless inflation gets really out of hand I doubt if they’ll change anything before the European Central Bank does. 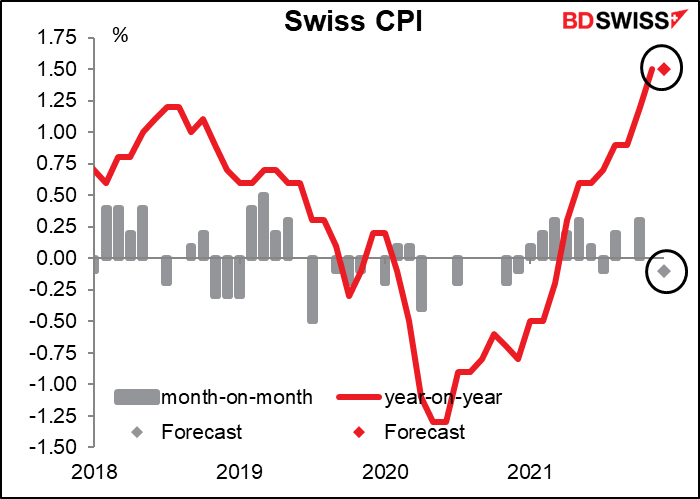 Also tomorrow morning we get German retail sales, but they don’t seem to be particularly important, judging from the Bloomberg relevance score. 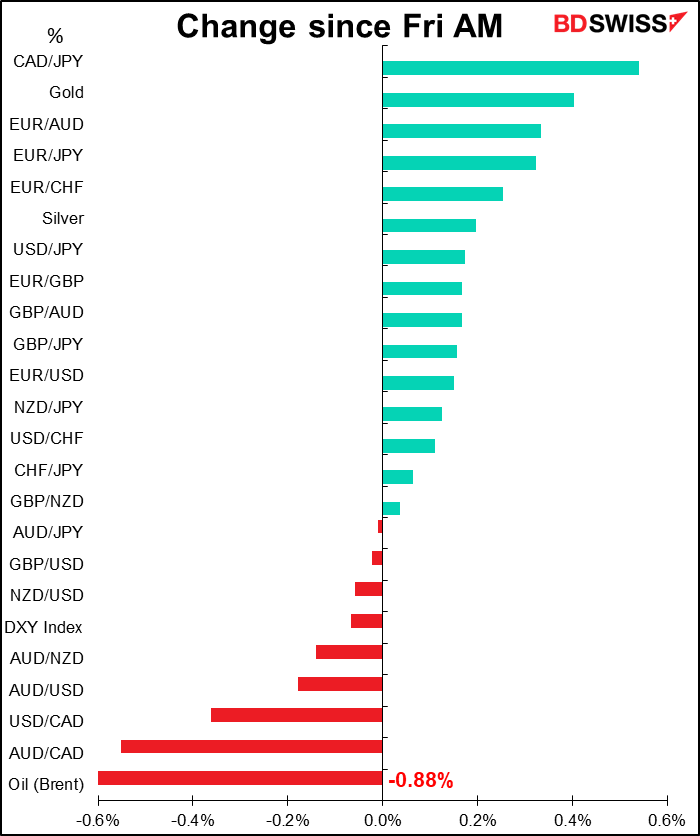