You are at:Home»MARKET PREVIEW»USD Up, Commodity Currencies Down as Jobless Claims Shake Market; nothing on the schedule

Such a big difference between the market in the beginning of the week and the market at the end! On Wednesday morning for example, just before the FOMC meeting, the difference in movement between the best-performing currency and the worst – the range on the graph above – was 42 bps and I was moaning about how boring the market is. Today that spread is 243 bps and markets are wild.

The trigger for the huge move was a much-worse-than-expected initial jobless claims figure. Claims were expected to fall by 16k but instead rose by 36k to 412k. This was the first increase since Apil 24th. The weak claims figure caused the Treasury market to reverse most of its losses from Wednesday following the FOMC meeting. Ten-year Treasury yields fell -7.1 bps to 1.504% (1.470% at the lows), losing most of the +8.3 bps rise the previous day.

It was significant though that no matter whether Treasury yields moved up (Wednesday) or back down (Thursday), breakeven inflation rates fell. Ten-year inflation breakevens fell a further -2.8 bps to a 3-month low of 2.29%. This is over 30 bps lower than its intraday high of 2.59% after the April CPI report in May shocked the markets.

The fall in breakevens may be a vote of confidence in the Fed’s ability to restrain inflation. Or perhaps it suggests that the markets don’t have full confidence in the Fed’s new average inflation targeting (AIT) regime. It appears that investors doubt that the Fed will really be willing to let inflation run above 2% for some time, instead trusting in the central bankers’ instinct to crush inflation like a cockroach. 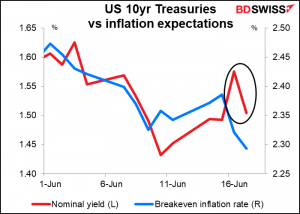 Either way, the commodity currencies were hit as commodity prices collapsed.

Grains were down as forecasts for rain and cooler temperatures in the US improved the supply outlook. Meanwhile, industrial metals and other economically sensitive commodities were lower on expectations that higher US interest rates would probably slow growth. The stronger dollar didn’t help, either. 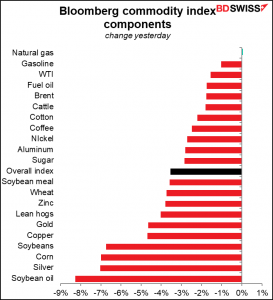 Agriculture and industrial metals have lost a lot of their 2021 gains, while precious metals are down for the year. 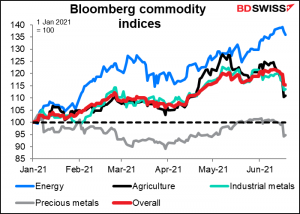 Lumber has been the poster boy for the pandemic-related surge in commodity prices, but it’s fallen 46% from its peak to lose almost all of its 2021 gains. Does this have implications for the US housing market? Maybe it’s a sign of a cooling housing market – or maybe it’ll make houses more affordable and thereby keep the housing market underpinned. 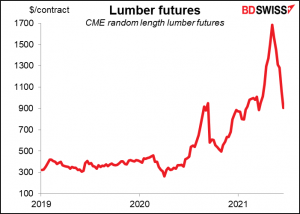 Precious metals were also hard hit – the lingering benefits of gold as an inflation hedge are diminished if the Fed isn’t going to let inflation rip.

Note that some commodity prices are rebounding this morning, such as copper and soybeans. We could see a modest rebound in the commodity currencies today as investors reason that the precipitous plunge was overdone and good news ignored. AUD should’ve benefitted more from its better-than-expected employment data Thursday (employment up 115.2k vs +30k expected, unemployment falls to 5.1% from 5.5% vs unchanged expected – and that’s with a better-than-expected rise in the participation rate). New Zealand too on Wednesday announced a much better-than-expected 1Q GDP figure: +1.6% qoq vs +0.5% qoq expected.

Oddly enough, despite the Sturm und Drang in rates, commodities, and FX, stocks were relatively unscathed, with the S&P 500 virtually unchanged on the day (-0.04%) and the NASDAQ ending up 0.9%. Nothing to discuss this morning! The main events & indicators of the day are already out.

The Bank of Japan left its policy settings unchanged, as virtually every sentient being with a view on the matter expected. It also decided to extend its lending program by six months, as was also expected. It did join the climate-change bandwagon by announcing a new initiative to provide funds for bank lending to climate-friendly businesses. Climate change activism is the latest trend among central banks. The Bank for International Settlements (BIS) earlier this month held a “Green Swan 2021” conference on “How in practice can the financial sector take immediate action against climate change-related risks?”.BoJ Gov. Kuroda participated in that seminar, as did a number of other central bank governors, so it’s understandable that the BoJ would put its conclusions into practice.

Meanwhile, UK retail sales came in much worse than expected. This was a rare miss for UK statistics, which generally have been higher than expected, such as the recent inflation and employment data. 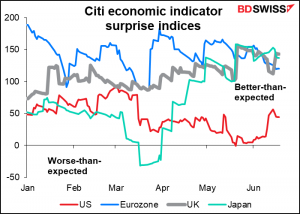 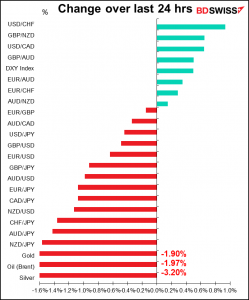