There’s a saying, “He who lives by the crystal ball has to learn to eat glass.” I had a crunchy breakfast this morning. Though I must say in my defence that the sharp moves in the Treasury market suggests I wasn’t the only one surprised today.

The Federal Open Market Committee (FOMC), the rate-setting body of the US central bank, Wednesday raised its economic forecasts, as I expected. Indeed, if anything they didn’t raise them as much as I thought they might. Growth and inflation this year were revised up substantially, but next year and 2023 not by so much. The unemployment rate was barely revised down at all. 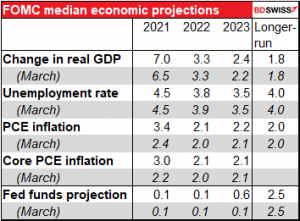 However, far from keeping the dots for 2023 unchanged, the median FOMC member is now forecasting not one but two rate hikes by then. Only five of the 18 voters – a distinct minority — think rates will be unchanged, vs 11 just three months ago. In contrast, eight now project three or more hikes. 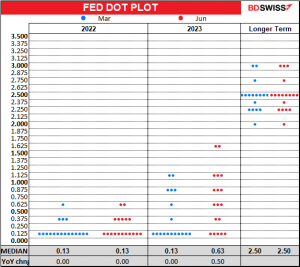 (The full projections can be found here.)

This change gives us more clarity into the Fed’s reaction function – how they will react to higher inflation under their new average inflation targeting regime. 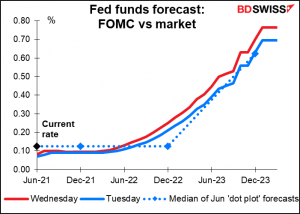 With interest rates revised up so much more than the inflation forecast, the implied real interest rate for USD was much higher. It’s therefore no wonder that the dollar rose sharply.

Despite the hawkish turn in the dot plot, there was no signal about when the Fed might start tapering down its $120bn a month bond purchases. However, Powell, who last December had said the Committee was “not even thinking about thinking about” tapering, did say that “you can think of this meeting that we had as the talking about talking about meeting, if you like.”

So, committee participants were of the view that since we adopted that guidance in December the economy has clearly made progress, although we are still a ways from our goal of substantial further progress. Participants expect continued progress ahead toward that objective. And assuming that is the case, it will be appropriate to consider announcing a plan for reducing our asset purchases at a future meeting.

Speculation will now center on which “future meeting” an announcement might be made. Many market participants expect that Powell will use the Fed’s annual meeting at Jackson Hole, Wyoming in October to hint at such a change, as has happened previously, and then the actual change will be in the September statement. Or maybe not, depending on the data.

Overall, the meeting represents a hawkish shift in the Committee’s thinking. As Fed Chair Powell made clear in his press conference, the members now have more confidence in the outlook for the economy and the labor market. While their forecasts maintained the view that the recent sharp rise in inflation is only temporary, Powell admitted that “inflation could turn out to be higher and more persistent than we expect” – a significant concession.

The process of reopening the economy is unprecedented, as was the shutdown at the onset of the pandemic. As the reopening continues, shifts in demand can be large and rapid, and bottlenecks, hiring difficulties, and other constraints could continue to limit how quickly supply can adjust, raising the possibility that inflation could turn out to be higher and more persistent than we expect.

He warned that the Fed was willing to raise rates if inflation expectations started to rise. Note though that on the contrary they’ve turned lower over the last month as the market comes around to the Fed’s way of thinking that the recent increases are likely to be transitory. 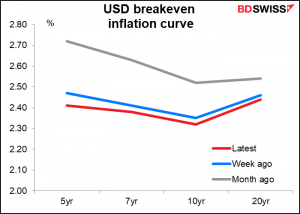 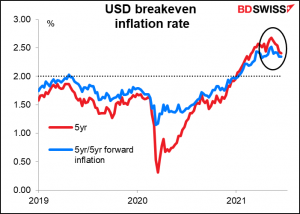 The shift in tone sent US interest rates up sharply across the curve, with most of the increase in the middle. 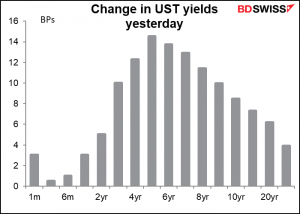 The change in tone makes me distinctly less bearish on the dollar. The main reason I’ve been bearish on USD is that the Fed seemed to be purposely behind the curve in dealing with inflation. That was consistent with its new average inflation targeting regime (“following periods when inflation has been running persistently below 2 percent, appropriate monetary policy will likely aim to achieve inflation moderately above 2 percent for some time.”) As it raised its growth and inflation forecasts but not its interest rate forecasts, its implied forecast for real interest rates fell.

The Fed was a notable outlier given the relatively high inflation rate and rapid acceleration in inflation in the US. As the table below shows, not only does the US have the highest inflation rate among the G10 countries, but also it’s had the largest change in the inflation rate from the end of last year. Now at a stroke they’re one of the few central banks that have set a likely end date for their super-lax monetary policy (the other being the Bank of Canada, which said it’s likely to start raising rates “sometime in the second half of 2022.” The Reserve Bank of Australia said “2024 at the earliest.”) This is positive for the dollar. 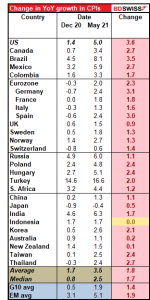 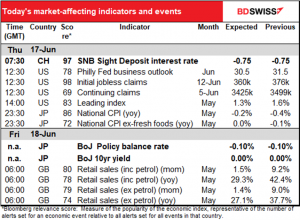 The European day starts out with the Swiss National Bank (SNB) meeting. As I mentioned yesterday, I expect them to keep their policy rate unchanged (as they have since January 2015) and repeated the usual phrase about being “willing to intervene in the foreign exchange market as necessary, while taking the overall currency situation into consideration.” Assuming I’m correct, the meeting shouldn’t have any impact on CHF.

Overnight there’s the meeting of the other frozen central bank, the Bank of Japan. As I said in my Weekly Outlook, The Bank of Japan – like the SNB — is similarly committed to keeping policy steady during the remainder of the Anthropocene Epoch or until the Rapture occurs, whichever comes first. With core CPI remaining in deflation thanks to cuts in mobile phone charges and Japan’s vaccination program lagging behind the rest of the developed world, there’s little chance of the Bank even “thinking about thinking about” normalizing policy any time soon. The new national CPI should be released while the meeting is going on, but it’s expected to be in deflation still and so shouldn’t make any difference (see section below). Nobody in their right mind looks for any significant change at this meeting or indeed any other meeting in the foreseeable future.

There are two small issues to deal with at this meeting. One, the BoJ’s special program to support corporate financing is scheduled to expire at the end of September. They may decide to extend it for another six months. That would be in effect a modest easing measure (or looked at the other way, the failure to extend it could be viewed as a form of tapering). Secondly, there is some interest in the BoJ’s money market operations as they haven’t purchased any exchange-traded funds (EFTs) since April 21st and have also reduced their purchases of Japanese Government Bonds (JGBs). Any comments they make about these purchases will be interesting to people who trade Japanese stocks and bonds, but probably not to FX traders.

In any case, the range in both USD/JPY and EUR/JPY tends to be lower than usual on most BoJ days, given the lack of any news or change in policy emanating from the meeting. 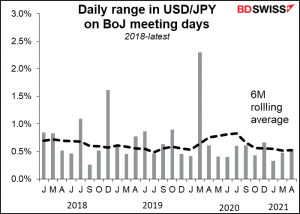 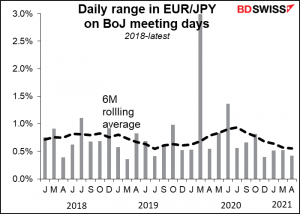 So now we just sit around and twiddle our thumbs until the US opens up. Then we get the Philadelphia Fed business outlook. Tuesday’s Empire State index was down a bit more than expected (fell to 17.4 vs expectations of 22.0, previous 24.3) but still shows a strong expansion. eco 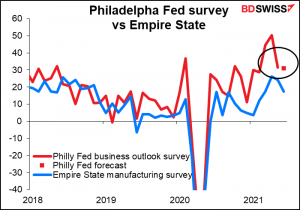 Although in fact the two series move in the same direction only 51% of the time, which is basically a coin toss. Interesting given that the regions they cover are right next to each other. 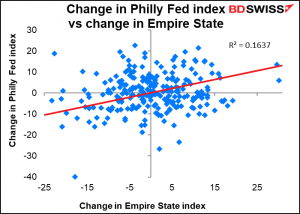 Next up is the weekly highlight, the initial jobless claims. The market consensus is for -16k, vs the 4-week moving average of -26k. But last week was only -9k, so maybe as the number falls, the change is falling too. Jobless claims have been down for six weeks in a row, which is the longest stretch since last July (when they were down for 13 weeks in a row). I think even if it’s a small fall, it’s still a fall, which is the right direction. That should be positive for sentiment and hence negative for USD. 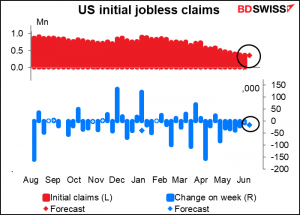 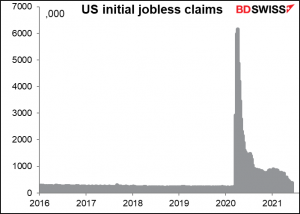 The US leading index is expected to be up once again, signifying a strong US economy in the future. 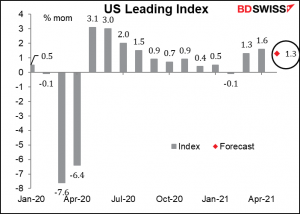 Overnight we get Japan’s national CPI, which is one of the most bizarre indicators around. While every other country is watching its inflation rate go through the roof, or at least through the official ceiling, Japan is still mired in deflation. Part of that is due to falling mobile phone rates, which were cut thanks to government pressure, but that’s not the whole show. How Japan has managed to buck the global trend here is one of the Seven Wonders of the Financial World. Perhaps Japan did have a similar inflationary impulse, except in Japan’s case it just caused the CPI to go from -1.2% yoy to -0.2% yoy (the forecast for today’s indicator).

In any case, with the BoJ on hold indefinitely and bond yields constrained by the BoJ’s yield curve control program (keeping 10-year yields at ±25 bps of 0.0%) there’s not much of a market reaction possible. 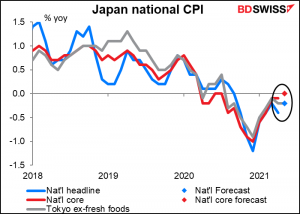 Finally, as dawn breaks over Oxford Street, Britain announces its retail sales figures. There were three pretty good months in a row, culminating in the outstanding +9.2% rise in April. Any further increase in May would be outstanding. I think as long as it’s positive it should be positive for GBP. 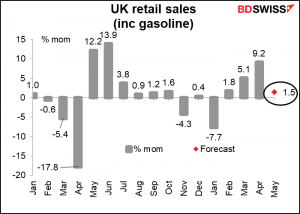 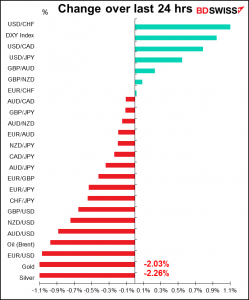