Wow! The dollar got absolutely CLOBBERED! Moreover, it’s hard to attribute the move – pin the blame? – on anything in particular. Normally I would assume such a big move might be in response to some huge “risk-on” mood in the markets, but both European stocks and US stocks were lower yesterday. There’s no specific trigger or catalyst that I can find.

EUR/USD rose back over 1.20 for the first time since March 4th even though US long yields rose marginally more than core European long yields. This reversed the recent trend, which has been for Europen yields to rise faster than US yields, narrowing the gap between the two (one of the factors supporting EUR recently). Perhaps FX investors paid more attention than stock market investors did to the news that the EU had secured and additional 100m doses of the Pfizer/BioNTech vaccine, bringing the total to be delivered this year to 600mn. 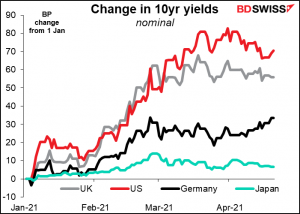 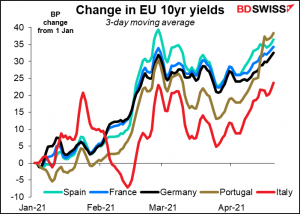 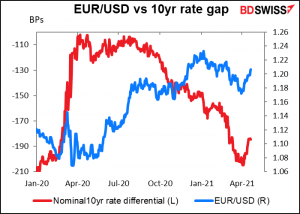 But maybe “oh reason not the need” is the key phrase today – there’s no particular trigger for why GBP should’ve led the pack, either. It rose steadily throughout the day, although GBP/USD failed to poke its nose over the crucial 1.40 line, the next big resistance. Just playing catch-up after last week’s declines? If you remember the graph I had yesterday of speculators’ positioning (I’ll repeat it for those who don’t, no extra charge), last week specs increased their long GBP positions. Maybe they’ve just decided the rout has gone far enough. 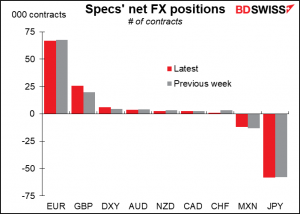 I have to say I was more comfortable with the declining pound, given the many problems Britain faces. On the political front, the Scottish National Party (SNP) and Plaid Cymru (the Welsh national party) are both campaigning for independence so that they can rejoin the EU. There will be elections for both the Scottish and Welsh Parliaments on May 6th.

Furthermore, –the trade problems the country faces now that Brexit is real will only get worse, in my view. I read recently that there are companies sprouting up to help EU firms that were buying from Britain to find new sources within the EU so that they don’t have to go through all the paperwork that’s now involved with buying British. Many of those customers are never coming back.

To make matters worse, there are other, urgent issues of national importance facing Britain on the trade front. For example: 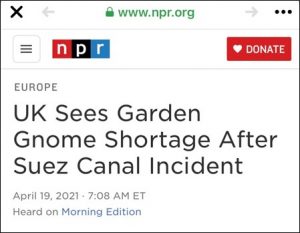 CAD got hit even as Canadian bond yields rose after the government released its FY21/22 budget. The deficit for the FY 2020/21, which just ended, was revised to CAD 354bn from CAD 382bn as forecast in the Fall Economic Statement. The deficit for the new FY2021/22 is forecast to narrow further to CAD 154.7bn. Bond issuance should decline to CAD 286bn from CAD 374bn, with issuance shifting into the longer end of the market – 42% in maturities of 10 years or more, vs 29% in FY20/21.

CAD weakened on the news – you can see from the graph how USD/CAD (red line) diverged from rising oil prices (blue line, inverted) thanks to the Budget. But now the gravitational pull of higher oil prices is starting to pull CAD back up.

The market now has to consider the implications of the budget for tomorrow’s Bank of Canada meeting. The fall in issuance this FY makes it more likely that they’ll have to trim their bond purchases, while the shift in issuance to the long end of the market will facilitate the rumored extension of the duration of their purchases. The question is the impact of this shift on the markets and the economy and frankly, it’s not easy to assess. Reduced purchases = tapering = less stimulus = tighter monetary policy = usually a higher currency, but also maybe slower growth? Meanwhile, longer-duration purchases = bigger impact per dollar = offsets the economic impact of the reduced quantity of purchases? We’ll have to see how the market judges it.

In Germany, the Green Party yesterday chose co-leader Annalena Baerbock as their candidate for chancellor at the September elections. The Greens have been surging in the polls recently and are poised to surpass the center-left Social Democrats as the #2 party. Given the math behind coalition governments – the largest party in the coalition nominates the chancellor — Chancellor Baerbock is no longer an impossibility. Ms. Baerbock might do well campaigning against the all-male cast of leaders from the other mainstream parties, although her relative lack of experience could be a hindrance.

Meanwhile in Japan, the Nikkei newspaper reported that the Bank of Japan is considering cutting its forecast for inflation this fiscal year. The BoJ and its pledge to get inflation back to 2% is the financial world’s equivalent of Chiang Kai-Sheks’ pledge to retake the mainland. 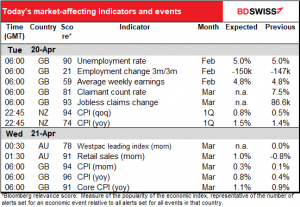 Today is almost as boring a day indicator-wise as yesterday was.

The UK employment data was better than expected – the unemployment rate fell one tick instead of remaining unchanged, while the number of jobs fell by only half as much as expected.

And that’s it! No Fed or European Central Bank speakers to interrupt our reveries as they’re in “purdah” ahead of their next meetings.So we can just watch the charts until the Asian day begins and New Zealand announces its consumer price index (CPI). The market’s forecast of +0.8% qoq is slightly below the Reserve Bank of New Zealand (RBNZ) 1.0% qoq forecast in the February Monetary Policy Statement, probably because of a below-normal rise in fruit and vegetable prices.

In any event, New Zealand is among the few countries that has managed to keep inflation within its target range for a sustained period, including this pandemic period. 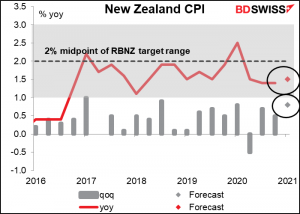 That of course hasn’t deterred the RBNZ from blowing up its balance sheet like a balloon since the pandemic began – tripling it in one year. 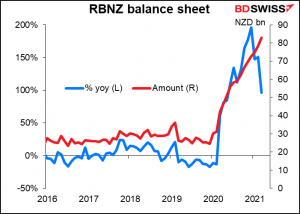 Australia retail sales are expected to be up by a respectable amount but nothing stellar, considering that it comes after three depressed months. This reflects continued disruptions: there was a short lockdown in Brisbane at the end of the month and severe floods in parts of New South Wales, including Sydney, and Queensland. Nonetheless this should be better than in the previous month, when there were lockdowns in Victoria and Western Australia. 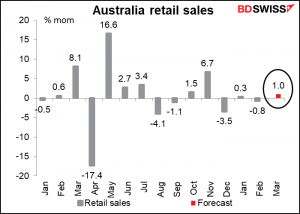 Retail sales in Australia seem to be moderating. Probably with much of the economy open, the “catch-up” spending that dominated earlier is more or less finished. 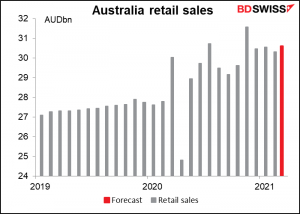 Alright now getting back to inflation, in the early early morning we have UK inflation data coming out. Core inflation (ex energy, food, alcohol & tobacco) is expected to return to the Monetary Policy Committee’s comfort zone, while the headline figure is forecast to rise but to remain just below. This is in line with what the MPC said after its March 18th meeting, namely that “CPI inflation is expected to return swiftly to around the 2% target in the spring, as the effects of those earlier falls in oil prices drop out of the annual comparison, and reflecting more recent increases in energy prices. These developments should have few direct implications for inflation over the medium term, however.” In other words, the BoE is agreement with the Fed that any rise in inflation is likely to be temporary and they’ll have to keep their collective feet on the pedal regardless. 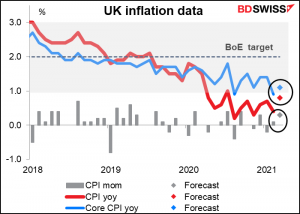 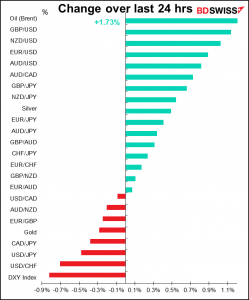