You are at:Home»MARKET PREVIEW»USD Up, AUD Down Down Down in “Risk-Off” Market; Bank of Canada meeting

There’s a saying in Japanese, “A woman’s heart is as changeable as the autumn sky.” Putting aside the obvious question – what about men’s hearts? – we could apply that same adage to the financial markets. Yesterday the dollar was in the doldrums – today it’s on top.

After hitting a record high on Friday, stocks in Europe plunged yesterday, with the Euro Stoxx 50 down 2% on the day for its worst day so far this year. 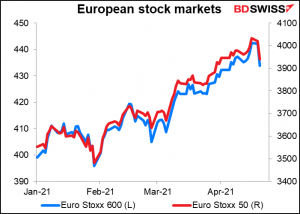 The fall is being attributed to the worsening global virus situation, which has caused a major “risk-off” mood. I’m not sure I buy that rationale – the virus situation hasn’t turned on a dime so why should the markets? – still, it’s as good an explanation I can see for movements that recently don’t seem to have a strong, identifiable fundamental underpinning.

Despite the surge of vaccinations around the world, new cases of the virus are hitting record levels every day. Note the surge in India (grey section). Turkey and Argentina are also big contributors to the “rest of the world.” 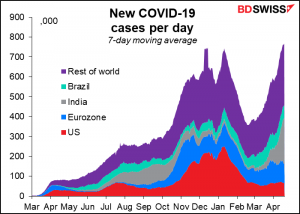 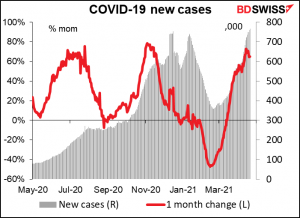 The pace of vaccination is very uneven – in some countries, notably the US, all adults are eligible to get the jab, while in other countries, notably the developing world, no vaccines are available for anyone. This difference will affect the rate at which countries achieve “herd immunity” and can get back to some semblance of normal economic activity. It may mean that growth in emerging market countries lags, with implications for those country’s currencies and for global growth as a whole. Moreover, the more new cases there are, the more likelihood there is of new, possibly deadlier, variants emerging.

The concerns about global growth that hit stock markets boosted bonds. In Europe, 10-year German Bund yields fell 2.7 bps, while UK gilts yields were down 2.4 bps and Italian BTPs -1.2 bps as confidence in the global economic recovery wavered. The trend continued during the US day as 10-yr Treasury yields fell 4.6bps to 1.56%, the lowest closing level in over a month.

Japan, once an outlier among the major countries, is seeing a sharp increase in cases, albeit still low relative to the rest of the world. 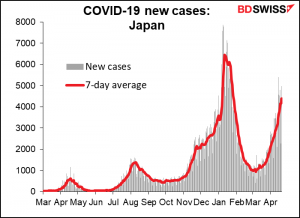 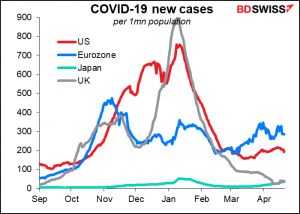 The government broadcaster NHK Wednesday reported that the city of Osaka asked the government to declare a State of Emergency (SoE) and the government is considering declaring an SoE for other areas as well, including Tokyo. This new SoE will probably be more stringent than the previous one as Osaka has asked the government to introduce stricter measures. The area under discussion accounts for some 30% of Japan’s GDP. To make matters worse, the measures could restrict movement during Japan’s “Golden Week” holiday in early May. It could therefore be a hit to growth. 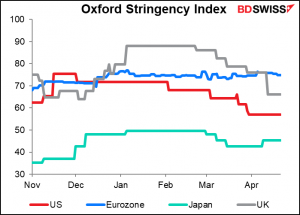 The big question for Japan is of course is whether the Olympics will be able to go on – the government has insisted that they will, but it’s looking doubtful. It’s been reported that International Olympic Committee Chairman Thomas Bach is considering visiting Japan on May 17-18. We’ll have to see how that meeting goes. If they do cancel the Olympics, I’d expect to see JPY weaken notably. Note though that JPY was the #2 performer on Tuesday despite the concerns about an intensified lockdown in the country. That demonstrates how global risk sentiment is the main mover of JPY nowadays, not domestic growth or domestic indicators.

It’s no surprise that on a day when global risk sentiment is the main moving factor, AUD was at the bottom of the pile. Hence AUD/JPY was the biggest mover of the day.

CAD was also hard-hit as oil prices plunged. You can see the collapse in the WTI futures (blue line) in the New York morning and the equally sudden reversal, in which oil recovered nearly half its loss. It looks to me like both of these moves were overdone and are gradually correcting. I wouldn’t be surprised to see oil and CAD recover further today. 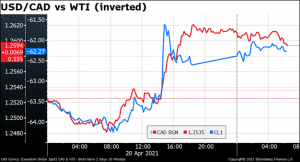 In Germany, Christian Democratic Union (CDU) leader Armin Laschet clinched the nomination for chancellor from his coalition after Christian Social Union (CSU) leader Markus Soeder conceded yesterday. The contest in September will now be between Laschet, the “continuity” candidate to succeed Chancellor Merkel, and the Green’s Annalena Baerbock, who was nominated Monday. Perhaps it’s just a bounce thanks to media attention, but a poll yesterday showed 28% support the Greens, 21% the CDU/CSU, and 13% the center-left SPD, meaning it’s likely to be a close race. A chancellor from the Greens – especially if they arrange a coalition that excludes the CDU/CSU – would be a huge change for Germany and the EU. 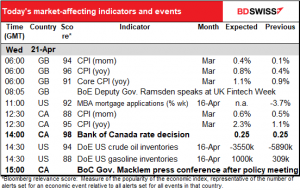 We already had the UK inflation data. It was generally in line with expectations or a bit weaker.

Next up is the Canadian inflation data. Headline inflation on a yoy basis is expected to jump, but a lot of that is just base effect – it was down 0.6% mom in March 2020 (and -0.7% mom in April, so get ready for a repeat next month.) 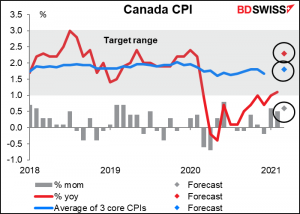 In any case it barely matters at all, because in 1½ hours we’ll get the Bank of Canada rate decision. As usual I discussed this in far more depth and detail than anyone wants to hear in my Weekly Outlook, which you can read if you want just by clicking on that link. But to sum up, I don’t think they’ll do much. Things are going well there with the economy, but new virus cases have been rising since mid-March, meaning it’s probably too early for them to get entirely optimistic.

The one area where we might see some change is in the Bank’s bond purchases, which currently run “at least $4 billion per week.” At the March meeting, the statement said that “As the Governing Council continues to gain confidence in the strength of the recovery, the pace of net purchases of Government of Canada bonds will be adjusted as required.” Speculation in the market is that they might reduce this to CAD 3bn or so and extend the weighted-average maturity of their purchases so that they don’t own as much of the short end of the market. That could be taken as the start of tapering and push CAD higher.

Monday’s FY21/22 budget makes this decision more likely. In the Budget, the government cut the deficit but changed the funding mix to emphasize issuance in the long end. This means the Bank will have to reduce its purchases in the short end to keep the market functioning smoothly, while also creating more long-end paper for the Bank to operate in. One might think that the Budget decision was made with some idea of what the Bank might decide to do today. 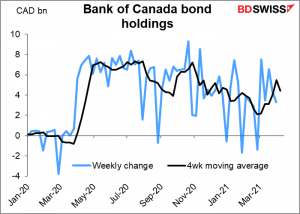 The other thing people will be looking for is any changes to their economic forecasts in the April Monetary Policy Report. It’s likely that they’ll upgrade their forecasts as the economy has been improving faster than they assumed when they made their last forecasts, in January, e.g. Q1 GDP is likely to come in around +6% annualized rather than the 2.5% contraction that the Bank had expected. I don’t think they will make any significant change in their forward guidance as a result however as central banks have tended to be conservative on this front, given the uncertainties caused by the pandemic.

Recently we haven’t seen much unusual volatility in CAD on Bank of Canada days when there hasn’t been a change in policy. I’d expect to see the same, although we could see CAD firm further in line with any improved forecasts for the economy. It’s already the second-best-performing G10 currency so far this year, after NOK. The two “petro-currencies” have benefited from the 30% rise in oil prices so far this year. 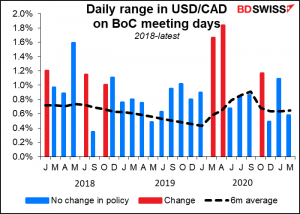 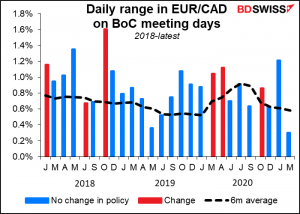 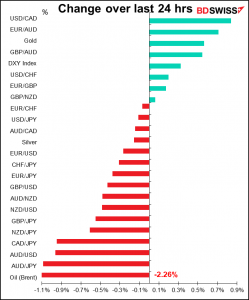