You are at:Home»MARKET PREVIEW»GBP Up, NZD Down; Canada Budget, UK Employment (tomorrow)

Another day of relatively modest movements in the FX market. The focus is clearly on the stock markets, which are surging further into record territory, and the gyrations of Bitcoin and now Dogecoin.

GBP bounced back on Friday. GBP’s movements once again seem to be the counterpart to EUR – that is, people buying or selling EUR are doing it vs GBP rather than USD. You can see how closely GBP/USD and EUR/GBP moved on Friday and today.

As for why people were selling EUR/GBP…this is kind of a mystery to me, especially as it follows Thursday’s announcement by the Scottish National Party (SNP) that they will hold another independence referendum by the end of 2023 if they win in the Scottish Parliament elections on May 6th (which it looks like they will). Scotland voted against independence by 55% to 45% in 2014, but the Scots also voted “remain” and are pro-EU – probably more pro-EU than they are pro-England.

The only explanation I could find was the usual one about how virus cases are lower and vaccinations are going better in the UK than in the Eurozone. That’s true, but it was true earlier in the week while EUR/GBP was going up every day, too. I think people just trot out that explanation when a reporter calls them up looking for an explanation and they can’t figure out why the currency is moving. No one can justify their huge salary at an investment bank by saying “beats me, mate! I dunno” so they have to say something. Believe me, I’ve been there. 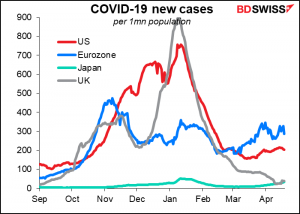 There was almost no change in the overall positioning vs USD last week as some significant moves in a few currencies cancelled each other out. There was a big increase in GBP longs and a big cut in CHF longs, bringing specs’ CHF position almost flat. A big cut in NZD and CAD longs too, percentage-wise (those are fairly small positions so the absolute amount wasn’t that great.) There was also a big increase in DXY longs, so clearly people haven’t given up on the dollar yet, despite the preceding five consecutive weeks of shrinking the overall long dollar position. The action clearly seems to be outside of EUR though. 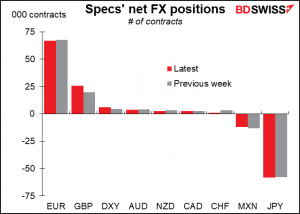 Hedge funds remain firmly neutral USD as their large JPY shorts are balanced by longs in other currencies, notably MXN, AUD and GBP. They too increased their GBP positions during the week. 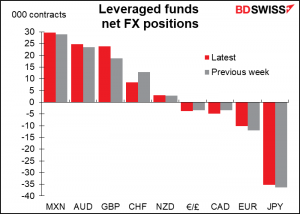 As for the precious metals, gold longs fell a bit and silver longs rose a bit. Nothing dramatic. 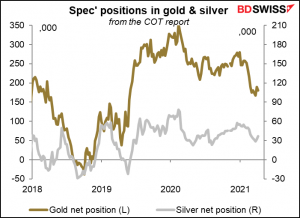 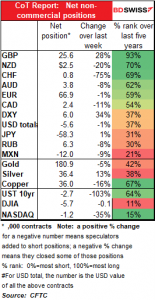 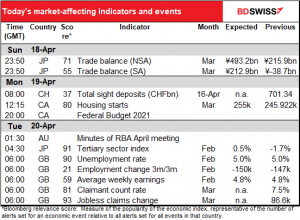 Not much on the schedule today, that’s for sure!

Swiss sight deposits are becoming terminally boring. The Swiss National Bank isn’t doing much in the market, apparently. Last week was yet another decline – 9 out of 14 weeks so far this year, for a total of CHF 1.4bn. 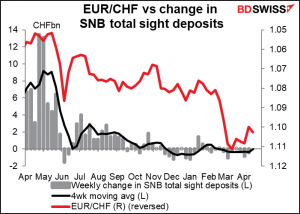 Canada housing starts were supposed to be out Friday. They’ve gotten delayed until today. I hope the houses themselves aren’t delayed. 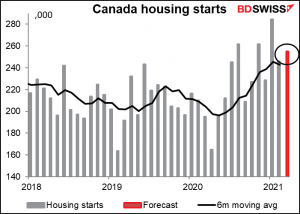 The market is expecting a further expansionary budget for Canada for the 2021/22 fiscal year. This could help to cement the idea of a rapid recovery in Canada once they get their virus under control, which would be positive for CAD. 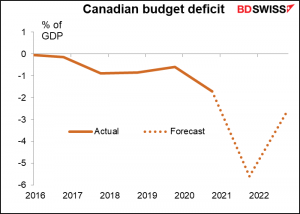 The relationship isn’t simple however as there are pros and cons on both sides.

The budget will include a revised forecast for net bond issuance during the FY. Net issuance will have implications for the market’s expectations for whether, when, and how quickly the Bank of Canada might taper off its bond purchases. In the Fall Economic Statement, the government forecast the 2021/2 deficit would be CAD 121.2bn and gross bond issuance would be CAD 374bn. Today’s announcement will be compared to those forecasts. The economy is doing better than expected and so it’s likely that the deficit will be narrower and net issuance smaller than previously forecast. If the difference is very big – if the deficit is much narrower than expected – then the supply of bonds will be smaller than expected and Canadian bond yields would probably fall. That might cause CAD to weaken.

On the other hand, a smaller bond issuance might force the Bank of Canada to reconsider the pace of its bond purchases, since it would be buying up a larger share of the market. It might have to cut back more than expected earlier than expected. That would boost CAD. Conversely, a large net issuance would allow them to keep buying bonds without impairing the market’s functioning, which would be negative for CAD – or at least, not affect it.

Sometime during the day, Germany’s Green Party will present its first-ever candidate for Chancellor. The party’s joint leaders, Annalena Baerbock and Robert Habeck, will decide between themselves which one of them will run. (Rock paper scissors maybe?) Ms. Baerbock seems to have the edge. The decision will formally be confirmed at the party convention in June. Whoever gets the nomination, it’s unlikely that they’ll become Chancellor at September’s federal election, but not impossible. The Greens are in second place only a few points behind the ruling CDU/CSU party, which has been doing poorly in the polls recently.

Overnight the Reserve Bank of Australia (RBA) releases the minutes of its April 6th meeting. The market will want to learn what the Board is thinking about Australia’s surprisingly strong labor market. Australia has regained its pre-pandemic level of employment (as in the number of people with jobs, not the unemployment rate) (and with a higher participation rate than before). The unemployment rate in February was 5.6%, a level that the RBA’s Statement of Monetary Policy in February forecast wouldn’t be hit until June 2022. The risk is that the RBA’s forecasts for employment and wages – and therefore prices – prove far too pessimistic and the RBA finds itself behind the curve. People will want to see what they’re thinking about this issue and how their views might change, also what they expect to happen to the employment figures now that the JobKeeper wage subsidy scheme expired at the end of March 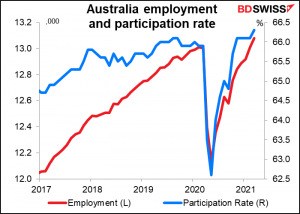 Japan’s tertiary sector index (that’s the service sector to most people) is expected to rebound only a little bit in February, and that’s after three consecutive months of decline. Not so good! 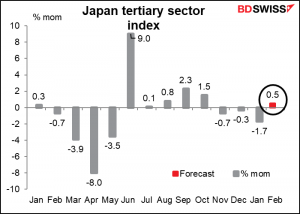 It goes along with the depressing service-sector purchasing managers’ index (PMI), which was in and out of contractionary territory even before the pandemic hit and hasn’t recovered to the 50 line yet. By contrast, Germany, the US, and UK have, although the Eurozone as a whole isn’t there yet. 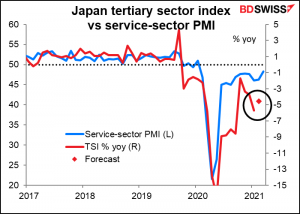 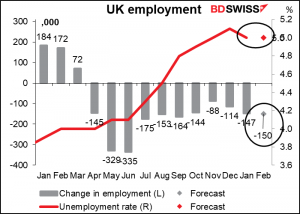 In any case, I’d expect that yet another decline in the number of people working – expected to be the biggest fall since last September – might be considered negative for the pound, except that market participants are probably looking past this data to what will happen as the economy opens up again and things get back to normal. So probably it will be ignored unless it’s better than expected, which could boost the pound. 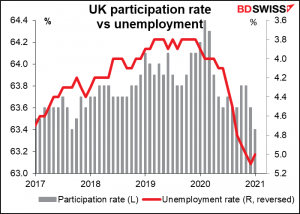 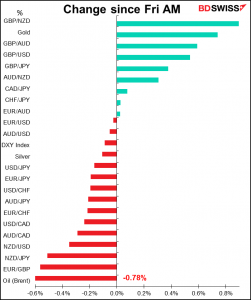