Another riveting day in the thrilling FX market. Given the volatility we’ve seen, one might be lulled into thinking that today is Christmas, except it’s a bit hot for that right now. Stock and bond markets were similarly becalmed ahead of today’s FOMC meeting (see below).

There is one mystery in the market: why was CAD the worst-performing currency when oil was up 2.2%? Having said that, it wasn’t a big move, but still it bears investigating. USD/CAD briefly broke through 1.22 for the first time since early May. It looks like there are simply some questions around the commodity currencies in conjunction with the fall in commodity prices generally. Copper and nickel, two of the most economically sensitive commodities, were down over 4% yesterday.

The fall in commodity prices, particularly industrial metals, is due to efforts by China to rein in commodity prices and reduce speculation. Bloomberg reported that the State-owned Assets Supervision and Administration Commission (SASAC) has ordered state-owned enterprises to limit their exposure to overseas commodities markets and report their futures positions to SASAC. Also, the National Food and Strategic Reserves Administration announced that it will release state stockpiles of metals, including copper, aluminum, and zinc, for the first time in several years.

On the other hand, oil was higher after the American Petroleum Institute (API) Tuesday announced a massive drawdown in crude oil inventories of 8.5mn barrels in the latest week, far more than the 2.5mn bbl drawdown the market is expecting.

I’m not exactly sure what’s going on though as both gasoline and distillate inventories rose for the second consecutive week. Also domestic US oil production rose slightly, by 200k b/d. 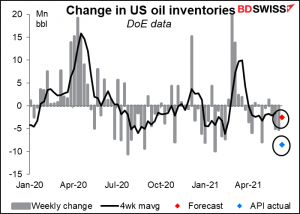 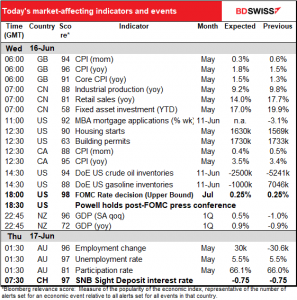 The big event of the day is of course the meeting of the Federal Open Market Committee (FOMC), the rate-setting body of the US Federal Reserve System, the US central bank. As usual, I wrote about it in more detail than you could possibly be interested in in my Weekly Outlook, which you can read by clicking on the link. In short, I would expect to see:

● A more optimistic tone in the statement, with the first paragraph reflecting the improved economic outlook;
● Higher forecasts for both growth and inflation in the Summary of Economic Projections (SEP); and
● A few more people expecting a rise in rates by end-2023, but not enough to pull the median dot up (yet).

As for the press conference, the key point that Chair Powell will be pressed on is likely to be what discussions if any they held about tapering down the Fed’s $120bn-a-month bond purchases. He’s likely to say that they discussed the conditions they’d need to see to begin tapering, but I wouldn’t expect him to be very specific. Probably he’ll say something about there being “a variety of views.” I wouldn’t expect any formal benchmarks to be named, e.g. unemployment has to be at X% or inflation at Y% or virus cases at Z. They’ll want to leave that vague for now.

What we saw back in April was that improved economic forecasts combined with no change in interest rate outlooks implied lower real yields and was therefore considered negative for the dollar (although the dollar subsequently strengthened in the next several days – see graph below). We could see the same sort of thing this time.

Recently there’s been a bit more volatility than usual in EUR/USD on FOMC days. That could be related to the question over tapering that hangs over the meeting. 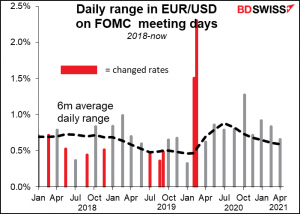 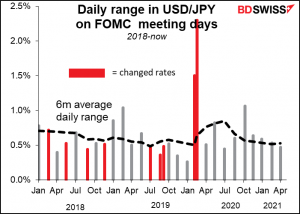 Over the last six meetings, EUR/USD has had a varied response on the day of the meeting, but it’s generally trended lower (i.e., USD has strengthened) in the following days. 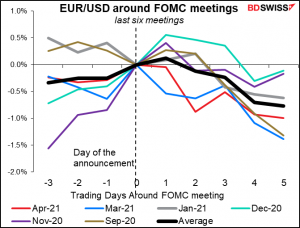 The UK consumer price index (CPI) is already out. It was higher than expected. Headline inflation is now above the Bank of England’s 2% target. Even core inflation is at their target. The news immediately sent GBP higher.

Yet I doubt if this move up will last. I noticed that yesterday’s better-than-expected employment data didn’t do much to shore up the pound, which fell against both the dollar and the euro. That suggests to me that sentiment is arrayed against the pound right now for whatever reason. Today’s news should in theory send the currency higher on a more sustained basis, because it makes a hawkish Bank of England statement next week more likely, but it seems that the will to buy pounds just isn’t there. 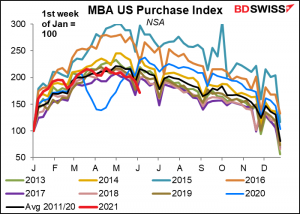 We’ll find out more about housing 1 ½ hours later when US housing starts and building permits are announced. Starts are expected to be up 3.9% mom while permits are forecast to be effectively unchanged. 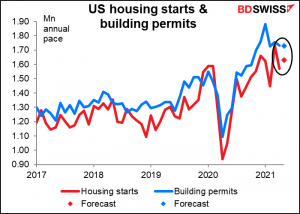 The Bank of Canada, like the Fed, might be described as a “transitorista,” i.e. one who believes the recent rise in inflation is only transitory. This seems to be a pretty unanimous view among central banks and increasingly the view in the market too. So rising inflation in this case only means lower real yields, which may be negative for a currency. 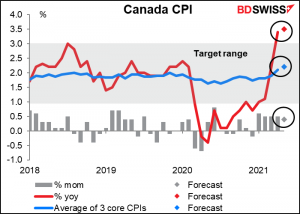 Then we wait for the Fed announcement & press conference.

The next indicator out is New Zealand Q1 GDP. New Zealand is the latest of the industrial countries to announce its GDP figure. I could make some jokes but maybe I have some readers there who wouldn’t appreciate it.

After the big gyrations during the pandemic, output has settled back into a more normal range. It’s expected to be up 0.5% qoq, which would be a lot better than the Reserve Bank of New Zealand’s pessimistic -0.6% qoq forecast from the May Monetary Policy Statement. That might enable them to take a more optimistic view at their next meeting, which would be beneficial for NZD. 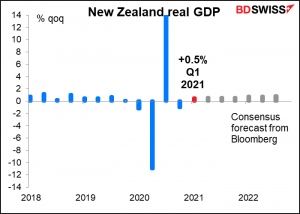 Australia’s employment data is expected to show a slight increase in jobs and a steady unemployment rate with a slight rise in the participation rate. That’s all good news and could be mildly positive AUD. 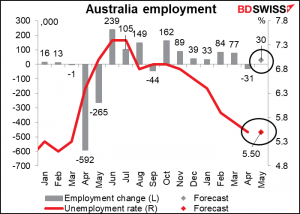 So then finally we come to the Swiss National Bank (SNB) meeting. Why didn’t I put this higher up in the comment, like right after the Fed meeting? You’d think that’s where the other central bank meeting belongs.

The point is, the quarterly SNB meetings are terminally boring. They’ve kept their policy rate unchanged at -0.75% (the lowest interest rate in human history) since January 2015 and just repeat more or less the same boilerplate comment:

The SNB is keeping the SNB policy rate and interest on sight deposits at the SNB at −0.75%. It remains willing to intervene in the foreign exchange market as necessary, while taking the overall currency situation into consideration

They will probably keep that statement intact until either a) the European Central Bank raises its interest rates, or b) EUR/CHF suddenly jumps up or down for some reason, or c) Hell freezes over, whichever comes first. Accordingly there’s not much point in spending a lot of time thinking about what they might do or say, because they’re not likely to do or say anything different at all.