You are at:Home»MARKET PREVIEW»USD Down as Real Yields Fall Further; German CPI, US Q2 GDP, US Jobless Claims 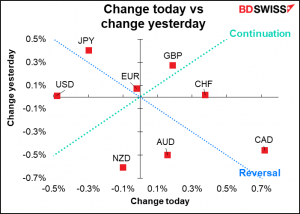 Ah yes…as I said in my weekly, while I’m pretty sure of the kind of statement we’re going to get after the FOMC meeting, it’s hard to predict what the market reaction will be. I’m pointing out that I said that last week to distract from the fact that said yesterday that I thought the FOMC meeting would push the dollar higher. Alas, it didn’t, even though the results of the meeting were pretty much as expected.

In fact the dollar did strengthen immediately after the statement was released, so I was right for a few minutes at least …

The most significant change in the statement came in the fourth paragraph, where they inserted a new sentence. With a bit of editing they tweaked the existing text to say that “Last December, the Committee indicated that it would continue to increase its holdings of Treasury securities by at least $80 billion per month and of agency mortgage–backed securities by at least $40 billion per month until substantial further progress has been made toward its maximum employment and price stability goals.” Then they added a new line: “Since then, the economy has made progress toward these goals, and the Committee will continue to assess progress in coming meetings.” This marks a big change for the Committee. It shows that they have indeed begun “thinking about thinking about” tapering down their bond purchases. This new line is a “place holder” that can be adjusted to provide guidance on when they might start the process of reducing their bond purchases. For example, at some point they could tweak it to say it might be appropriate to taper their purchases “in coming meetings,” followed by “in coming months,” then “soon it will be appropriate,” etc.

This is a hawkish change. This is the first concrete step toward that future goal of cutting their bond purchases. However, the impact of the statement was offset during the press conference when Fed Chair Powell said they weren’t close to meeting their criterion of “substantial further progress” toward meeting their goal for their maximum employment mandate. He said there is “some ground to cover on the labor market side. I think we’re some way away from having had substantial further progress toward the maximum employment goal. I would want to see strong job numbers.”

On the other hand, Powell also downplayed the significance of the fact that the “dot plot” showing the Committee members’ forecasts for rates implies two rate hikes by end-2023. “…the dots are not a great forecaster of, of future rate moves,” he said. “And that’s not because—it’s just because it’s so highly uncertain. There is no great forecaster of, of future dots. So, so dots to be taken with a—with a big, big grain of salt.” He said that “rate increases are really not at all the focus of the Committee… in terms of our tools, it’s about asset purchases. Liftoff is well into the future.” 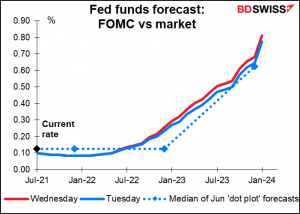 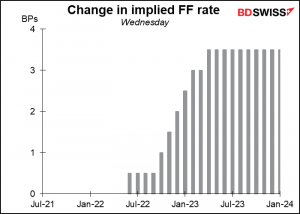 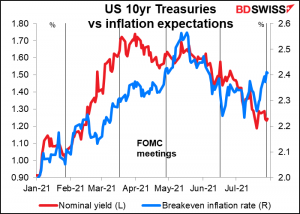 The Fed also established two new standing repo facilities, one domestic and one foreign. The foreign one is aimed at preventing distortions from appearing in money markets when there’s a global rush for dollars, like there was back in March and April of last year. This may also have put some downward pressure on the dollar, although it’s more of a long-term issue that’s not particularly relevant to the market right now. 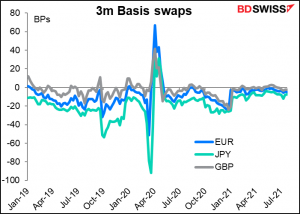 CAD was the best-performing currency even though Canadian inflation data missed expectations on the soft side.

You can see that USD/CAD did indeed move higher (CAD weakened) when the inflation data was released, but started to move back down shortly after. The big lurch down (CAD stronger) came after Fed Chair Powell began speaking. 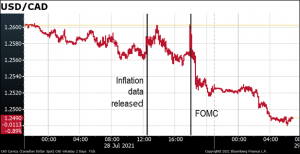 In the event it looks like oil was once again the most important factor for USD/CAD. 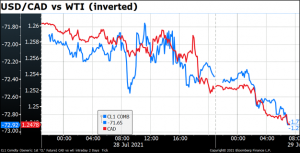 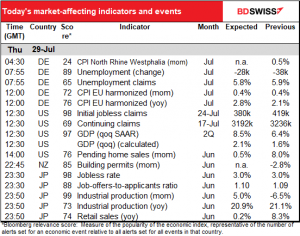 German unemployment is expected to improve somewhat, with the number of unemployed and the unemployment rate both falling. Although the German labor market is distorted by government subsidies and programs to keep people in work, this is still good news that could be positive for EUR. 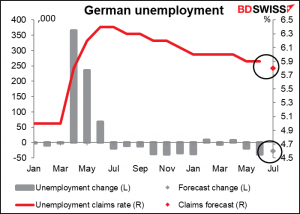 The German consumer price index (CPI) is expected to leap higher, but a good part of that is due to the reversal of the VAT cut that took place last year, as well as higher energy and commodity prices. Bundesbank President and über-hawk Jens Weidmann recently warned that German inflation could “potentially go in the direction of the 5% mark towards the end of the year.” But as the “temporary effects” pushing it up unwind, it will “undoubtedly decline again significantly after that.” “The future path is uncertain, however,” he cautioned. The dreaded US initial jobless claims are expected to drop by 39k. That follows last week’s shock-horror-chaos of a 51k increase, a far cry from the 10k decline that the market was looking for. Jobless claims have been pretty stable recently; they were 418k on June 10th and 419k last week, so no net change over the last five weeks. That’s not the “substantial progress” that the Fed wants to see. Even this week’s forecast of 380k would be higher than they were the first week of June (374k). So this might be slightly USD-positive but I don’t think the market’s going to get very excited until jobless claims have come down, shall we say, more substantially? 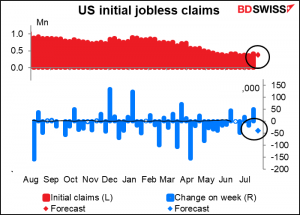 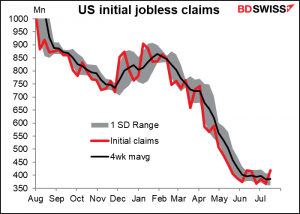 On the other hand, continuing claims are doing much better. They’ve been gradually declining (with the occasional increase) and have fallen to a post-pandemic low.

Continuing claims can fall for several reasons. On the one hand, a person may find work and stop claiming benefits; on the other, benefits can expire and the person either finds work or drops out of the labor market. These figures are for state unemployment claims and so aren’t directly affected by the early expiry of federal unemployment programs, but it’s possible that people who lose their federal benefits decide to get a job and thereby drop out of the continuing claims. There is some evidence that this is happening; since the end of May, continuing claims have declined by nearly 18% in states that ended the federal programs in June and July, vs a 14% decline in states that are keeping the benefits through September. US Q2 GDP is expected to come in quite strong at +8.5% qoq SAAR – which in most other countries would be +2.1% qoq. Excluding last year’s extraordinary rebound in Q3, this would be the fastest rate of growth since Q4 1983, when the US economy was still recovering from the Volcker recession of 1980 and the Fed was gradually lowering interest rates. It’s also likely to be the peak of the recovery – the market consensus for Q3 is currently +7.1% qoq SAAR and it’s largely downhill from there. I suspect that an outsized figure like this would tend to reawaken tightening fears and could be positive for USD. 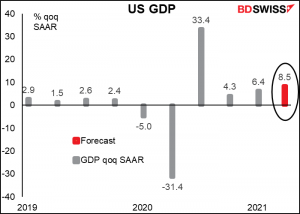 The unemployment data is expected to be terminally boring: no change in the unemployment rate and a tiny rise in the job-offers-to-applicants ratio. The country still had State of Emergency orders in effect in several regions during part of the month, hampering the recovery in jobs.

Industrial production is expected to rebound after the big drop in May. The Ministry of Economy Trade and Industry (METI) forecast for the month suggested a 9.1% mom rise, although that number is usually biased to the upside. 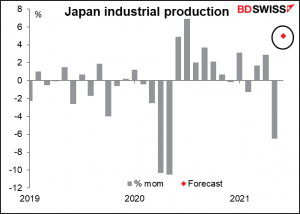 Retail sales are expected to rebound after two months of decline. In this case, the lifting of the State of Emergency in some areas helped as major department stores opened on weekends again, which probably boosted sales. 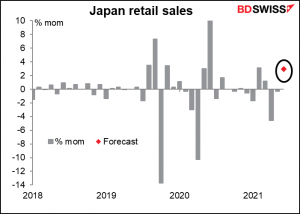 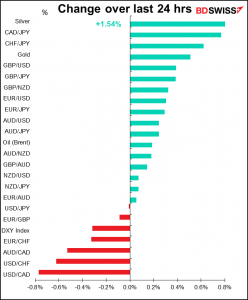