A big “risk-off” day as the tech bubble in China deflates. The NASDAQ index hit a record high on Monday but fell 1.2% yesterday as the Hang Seng tech index, the 30 largest tech companies in Hong Kong with high exposure to “innovative tech themes,” continued to plunge (-8% Tuesday after falling 6.6% Monday). It recovered a bit today (+2.2%) but is still down 40% from its record high in February.

The index has been declining for some time but the sell-off gained pace last week thanks to the recent drive in Beijing to regulate tech companies. According to Bloomberg, Tuesday’s plunge was due to speculation that US funds are offloading China and Hong Kong assets in anticipation that the US may restrict investments in the region.

The background to this debacle is that the Chinese government has been attempting to rein in private companies that it blames for exacerbating inequality, increasing financial risk and challenging the government’s authority. These include education, food delivery and property companies. Traders are worried that the crackdown could expand to other industries such as health care.

Of course this is a China-specific story of regulation that doesn’t necessarily affect companies elsewhere, but it does affect the mood. Furthermore, investors taking a loss in one position often take profits in another area to offset the loss.

And perhaps they have an eye on the appointments that President Biden is making in the antitrust division of the US Department of Justice. Ever since the Reagan administration, the main criterion for determining whether to allow or block a merger has been whether it will result in increased prices for consumers. If not, then it was allowed to go ahead. Now that philosophy is changing and market dominance and consumer choice are becoming more important again, as well as monopsony – the presence of only one buyer in a market (as opposed to monopoly, the presence of only one seller). The result could be pressure to break up companies like Facebook, Google, and Amazon even though they clearly aren’t pushing up prices for consumers – you can’t beat free.

In any case, the sea of red in European stock markets – all major markets were down yesterday – and the rally in bonds induced a similar “flight to safety” in the FX market. As usual in such cases, JPY was up and the commodity currencies down. A slightly higher-than-expected Australia CPI (+3.8% yoy vs +3.7% expected, 1.1% previous) failed to provide support for AUD.

There were two conspicuous anomalies. USD was largely unchanged. It often benefits from a “risk-off” move, but not yesterday, as growth expectations were hit by a disappointing durable goods figure (+0.8% mom vs +2.2% expected) and a recommendation from the government’s Centers for Disease Control and Prevention (CDC) that even people vaccinated against the coronavirus should resume wearing masks in public indoor spaces in parts of the country where the virus is surging. The market ignored the better-than-expected Conference Board consumer confidence (129.1, up from 127.3 vs fall to 123.9 expected) and Richmond Fed manufacturing index (27 up from 22, vs fall to 20 expected).

The other anomaly was that GBP rallied for a second day on optimism about declining virus cases, plus reports that the country may significantly open up international travel today. 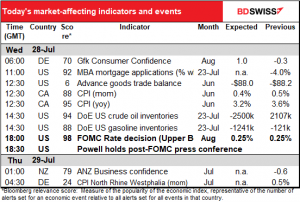 The main point of interest today will of course be the meeting of the Federal Open Market Committee (FOMC), the body that decides monetary policy for the US central bank, the Federal Reserve. As usual, I covered this in minute detail in my latest Weekly. I’ll summarize here what I said there, minus most of the graphs too.

The FOMC is bound to discuss the appropriate timing for tapering down their $120bn-a-month bond purchases, but they’re not likely to be in any rush to make a decision, IMHO. They said they’d start tapering when they had made “substantial further progress” toward their goals of stable prices and maximum employment. At their last meeting on June 16th, the Committee determined that they were still a ways off from meeting that standard, but that they expect progress to continue. Since then, the June nonfarm payrolls figure was good, but not great. The headline figure of +850k was good, but the unemployment rate rose one tic and the participation rate has stopped rising. That’s not progress at all. They’ve had more success meeting their inflation goal, though. Inflation is well over their target of 2% on the PCE deflator.

We can expect an optimistic outlook on the US economy. The Beige Book, which usually sets the tone for the FOMC statement’s characterization of the economy, upgraded its view on the economy slightly. “The U.S. economy strengthened further from late May to early July, displaying moderate to robust growth,” it said. That’s better than in June, when it said “The national economy expanded at a moderate pace.” They are however likely to remain cautious because of the alarming spread of the delta variant of the virus. This is one of the main reasons why I think the “let’s wait” crowd is likely to prevail.

The market reaction is hard to predict. Last time the FOMC meeting was really an inflection point for the Fed, with its upbeat outlook for the labor market and concern about higher inflation. The Fed acknowledged the strong economic outlook and the possibility that inflation might be higher than they expected. The result however was a one-day pop in interest rates, which have largely trended lower since then regardless. 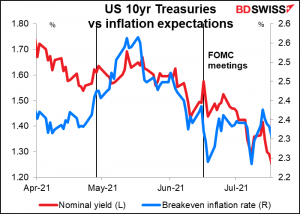 Furthermore, even if we get the bond market’s reaction right, that doesn’t mean we’ll get the currency right. Earlier this year the dollar weakened as US rates came down, more recently it’s strengthened. 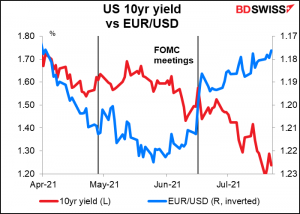 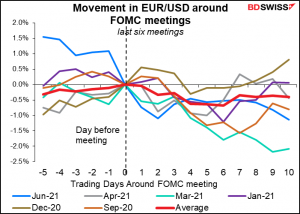 I expect the FOMC to take a relatively optimistic view on the economy and the outlook. I think they are likely to talk about having made “further progress” toward meeting their goals, although not yet using the magic word “substantial.” Nonetheless I would expect this to push bond yields higher and to boost the dollar. I think that’s especially likely now that the European Central Bank has revised its forward guidance in a way that promises “lower for longer.” The famous “monetary policy divergence” should in theory kick in and send EUR/USD lower.

As for today’s indicators, we’re going to start with the winner of the “Least Important Indicator” award: the US advance goods trade balance. This is the merchandise trade balance of the US, as opposed to the monthly trade figures, which include trade in invisibles (streaming superhero movies, Kindle books, tourism, insurance, etc.) Its Bloomberg relevance score of 5.5 even beats the much-maligned Eco Watchers’ Survey of Japan, which clocks in at 8.25. Nonetheless as an old-time FX guy I can’t shake the idea that trade flows are important for FX, even though I’m well aware that capital flows have long since swamped them.

The trade deficit is expected to be little changed from the previous month. I doubt if this will have any effect on the FX market. 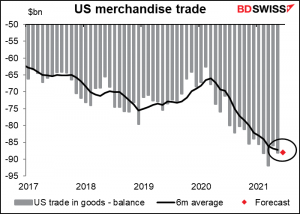 Not necessarily so for the Canadian consumer price index (CPI). Headline inflation is outside the Bank of Canada’s target range, but it’s expected to slow a bit, while the core measures, which are right around the middle of the target range, are forecast to be more or less unchanged. A lot of the headline measure’s surge is just base effects as prices fell in March and April last year and only gradually recovered. In any case, the Bank of Canada is well aware of what’s happening: they said after their recent meeting that “With higher gasoline prices and on-going supply bottlenecks, inflation is likely to remain above 3 percent through the second half of this year and ease back toward 2 percent in 2022…” “The factors pushing up inflation are transitory, but their persistence and magnitude are uncertain and will be monitored closely,” they added. 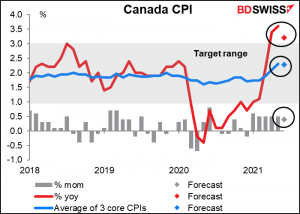 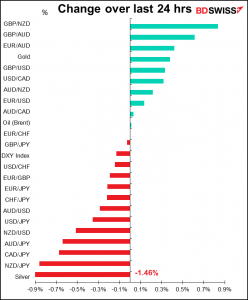