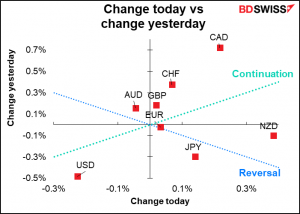 Sometimes a miss isn’t a miss. Yesterday’s US GDP figure missed estimates by a lot — +6.5% qoq SAAR (+1.6% qoq) vs +8.4% qoq SAAR estimate (+2.1% qoq). But the miss was almost entirely due to a lower-than-expected contribution from inventories. Personal consumption was actually a bit stronger than expected at +11.8% vs +10.5% consensus forecast. Business investment was also a relatively heathy +8.0%.

The inventory miss isn’t entirely a bad thing, either. The low level of inventories means that companies will have to rebuild their stocks, meaning that demand should continue strong in Q3 and beyond. The only question is the capacity of global supply chains to meet the additional demand – are the goods available and are the ships available to move them around?

The better-than-expected personal consumption figures helped the market ignore the worrisome rise in the GDP price index, which was up 6.0% yoy vs +5.4% expected – higher-than-expected inflation! The jobless claims were also a disappointment: initial claims fell by less than expected (-19k vs -34k expected) and continuing claims rose for the first time since mid-June.

Or was it the success with the infrastructure bill? Yesterday the White House and a bipartisan group of senators announced that they had reached a compromise on a massive infrastructure spending bill. The bill hasn’t yet been passed into law, but it’s progress.

In any event, market pricing of Fed rate hikes moved slightly more dovish on the day, unwinding most of the move up that occurred after Wednesday’s FOMC meeting. Maybe a result of the GDP miss + the jobless claims miss?

But US bond yields moved higher on optimism over the US recovery.

The S&P 500 hit a record intraday high before declining near the close to end just 3.15 points or 0.07% below its record high. The risk-on move was broad based, as 77% of the stocks in the index finished higher, along with all sectors except for Communication Services (-0.9%). And commodity prices rallied through the day, led by energy and metals, although iron ore was down 0.63% (Singapore Exchange TSI iron ore futures) or -2.7% (iron ores fines 62% Fe offshore export price Australia to China CIF), depending on which series you follow. The subsequent decline in AUD/NZD probably explains the outperformance of NZD – especially as milk prices have been climbing this week. 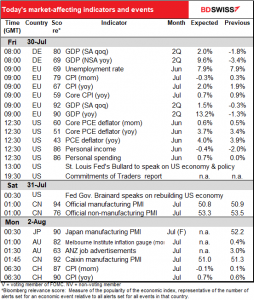 I have GDP figures from Germany and the EU on the schedule, but actually France, Spain, Austria, and Italy announce theirs as well this morning. So by the time the EU-wide figure comes out one hour after Italy, anyone on a trading floor should have a pretty good idea of what the number is going to be and the market probably won’t move much. Germany, France, and Spain together have 96% of the information necessary to calculate the EU-wide GDP. Add in Italy and you get to 98%. The rest of the EU doesn’t add much information. 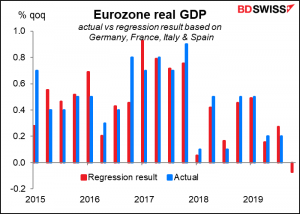 German and EU-wide GDP are expected to show unusually strong growth, but coming after the previous quarter’s decline (or two previous quarters in the case of the EU as a whole) it’s not so impressive. On the other hand, it would be almost exactly the same as US Q2 growth, which yesterday came in at a surprisingly low 6.5% qoq SAAR or 1.6% qoq (market expectations had been for +8.4% qoq SAAR or +2.1% qoq). 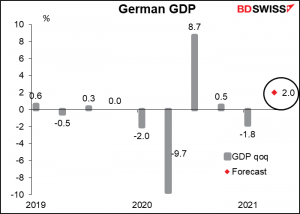 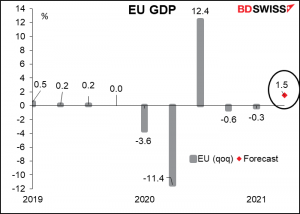 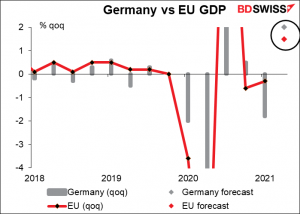 According to the market’s forecast, output in the Eurozone as a whole won’t recover to pre-pandemic levels until Q4 of this year. It’ll be much later for some countries; Italy is expected to be Q3 next year and Spain, Q4. 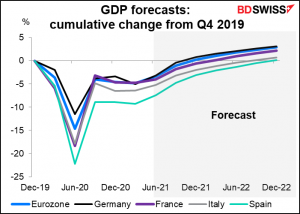 Next up is the US personal income and spending data, with their sidekicks, the personal consumption expenditure (PCE) deflators. These are the Fed’s preferred inflation gauges, especially the core PCE deflator. The market pays more attention to the US consumer price index as the definitive metric for inflation, but the Fed couches all of its forecasts and targets in terms of the PCE deflators.

They’re already far above the Fed’s 2% target and expected to rise further. 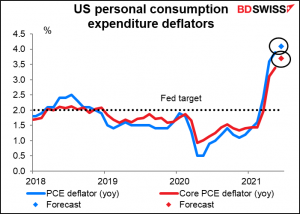 (Note: this is from my Weekly, so if you read that you can skip this.)

The San Francisco Fed has analyzed the PCE deflators and broken them down into components that are sensitive to the virus and areas that aren’t. They defined “sensitive” as those that fell in price when the virus hit. As you can see, the rise now is largely due to the same components (mostly health-care services and used cars and trucks). It’s reasonable to assume that once the dislocations and disruptions caused by the pandemic are over – whenever that may be – prices of these items will stop rising. This explains why the Fed believes the higher rate of inflation will be “transitory” and is in no big rush to take their foot off the accelerator. 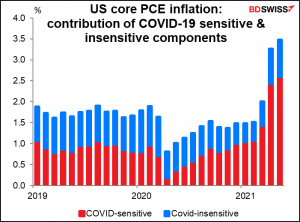 For example, used cars & trucks account for about one-third of the yoy rise in the CPI recently, but according to Manheim, the world’s largest used auto auction house, prices fell in both June and July. So that significant factor has apparently started to die down already. 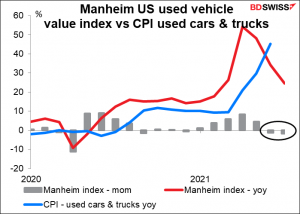 However…does the market care? Does the average FX trader read the San Francisco Fed’s economic blog? No way Jose. So this rise could push USD higher, especially coming at the end of a week when the dollar has weakened – it could prompt some profit-taking on the part of those with short USD positions.

As for personal income & spending, incomes are expected to be down a touch (probably due to several states ending their federal unemployment benefits) while spending is forecast to rise a bit. 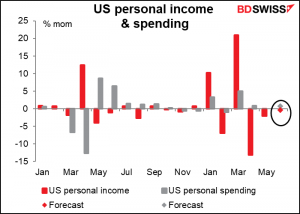 Both are still well above pre-pandemic levels. On these forecasts, incomes would be 8.8% above the pre-pandemic level, spending 6.0%. It remains to be seen what will happen to incomes & spending when the extraordinary federal benefits expire in September. 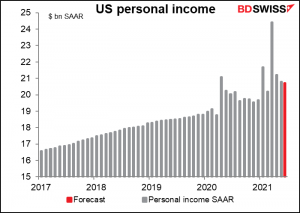 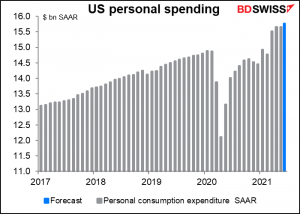 Over the weekend, China will release its bizarrely stable official purchasing managers’ indices. Under normal conditions they barely fluctuate. It’s not particularly believable. 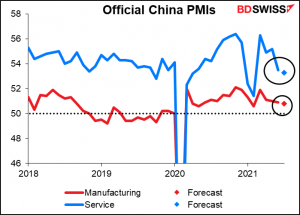 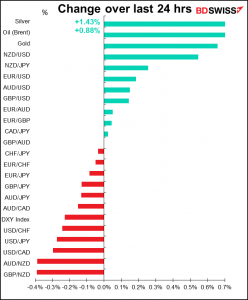