You are at:Home»MARKET PREVIEW»USD & JPY Up in “Risk off” Environment; Bank of England, Initial Jobless Claims 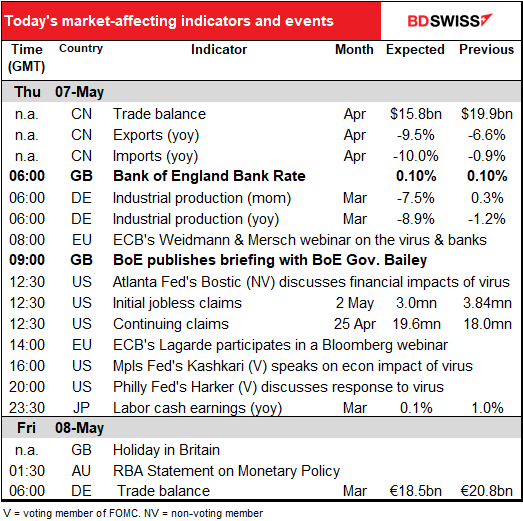 Risk on, risk off. Risk off, risk on. That’s basically what it comes down to nowadays. Yesterday was “risk off” as fears about US-China trade tensions continue. The problem is, Trump needs someone to blame for bungling the US reaction to the COVID-19 pandemic, and the Chinese make a tempting target – it apparently originated there, after all. So maybe some people would like to see him acting tough by standing up to the Chinese, as if that would do anything to reduce the death toll. Lower oil prices (WIT -2.5%, Brent -3.7%) also didn’t help – utilities (-3.5%) and energy (-2.6%) were the worst-performing sectors of the market. Presumably the consistent theme here is fears of reduced demand for energy of one sort or another.

USD was the best performing currency on a trade-weighted basis, probably thanks to weak oil – Mexico is the US’ second-largest trading partner and Canada is its fourth-largest, and both their currencies were lower because of lower oil prices again. The appalling ADP report, which showed some 20.2mn job losses in April, didn’t have much impact as it was pretty much in line with expectations.

JPY also did well as both CTAs and real money investors bought JPY, particularly vs EUR. The yen has several things going for it nowadays. In particular, its decades-long interest rate disadvantage has now largely disappeared, reducing the incentive for Japanese investors to move their money abroad, particularly into Europe, where bond markets are largely either a) negative-yielding or b) risky. Japanese investors can be forgiven for thinking that getting no return on capital is better than getting no (or reduced) return of capital. 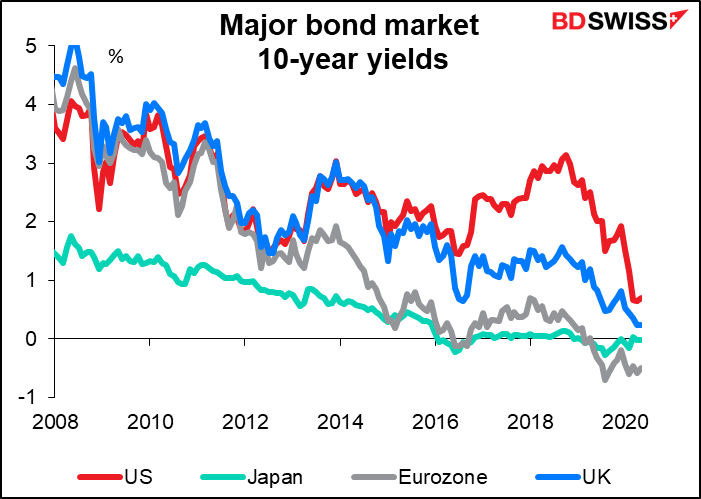 GBP was the worst-performing currency ahead of this morning’s announcement of the result of the Bank of England meeting (which actually took place yesterday, but that’s just a technicality). In addition, the UK government is scheduled to review lockdown measures today and PM Johnson said lockdown could be eased starting from next Monday, never mind that the UK has more new cases of COVID-19 than all of the EU does every day.

EUR and GBP also suffered from yesterday’s dire economic forecasts from the European Commission. The headline on the article pretty much summed it up:  A deep and uneven recession, an uncertain recovery. They look for a 7.7% yoy contraction in GDP this year in the Eurozone. 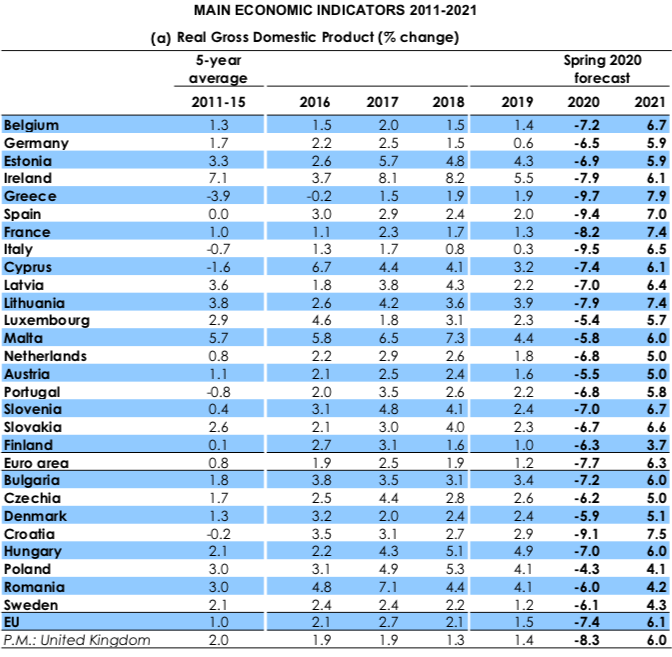 The dismal forecasts in Europe are only matched by a dismal present. A notable increase in new COVID-19 cases in Germany ahead of yesterday’s discussions between Chancellor Merkel and state leaders and a huge drop in German factory orders (-15.6% mon vs -10% expected) weakened EUR from the start of European trading yesterday. The pandemic’s economic toll was reflected in other news coming out during the day:  April services and composite purchasing managers’ indices (PMIs) all hit record lows in Spain, Italy, France, Germany, and the Eurozone, despite slight upward revisions to the latter two, while Eurozone retail sales fell more than expected in March and German April car registrations in April plunged 61% y/y.

My only question would be:  Every place has been hit by the virus, not just Europe. Where is it likely to be any better? And the answer here could be Japan.  Using the Oxford COVID-19 Government Response Tracker, a measure of government stringency in locking down countries, we can see that Europe has had a much more severe lockdown than Japan, and accordingly Japan’s economy has suffered much less. Furthermore, Japanese courts have no problems with the Bank of Japan funding ever-increasing government deficits, contrary to what’s happening in Europe. I had thought that with governments easing lockdown measures, “risk on” would dominate and JPY would weaken, but I’m beginning to question that conclusion. 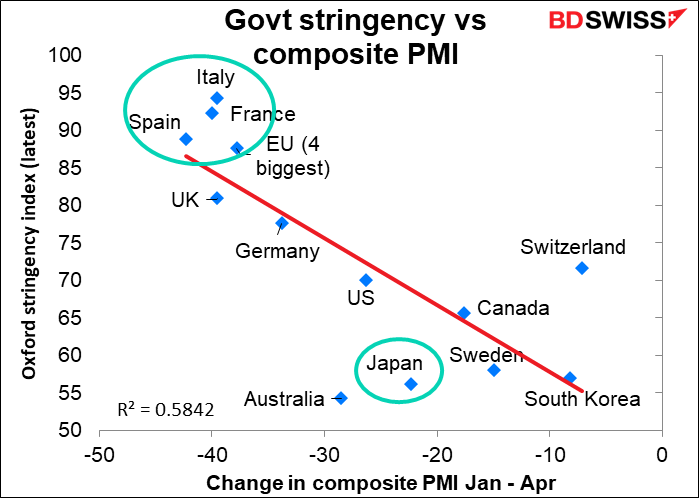 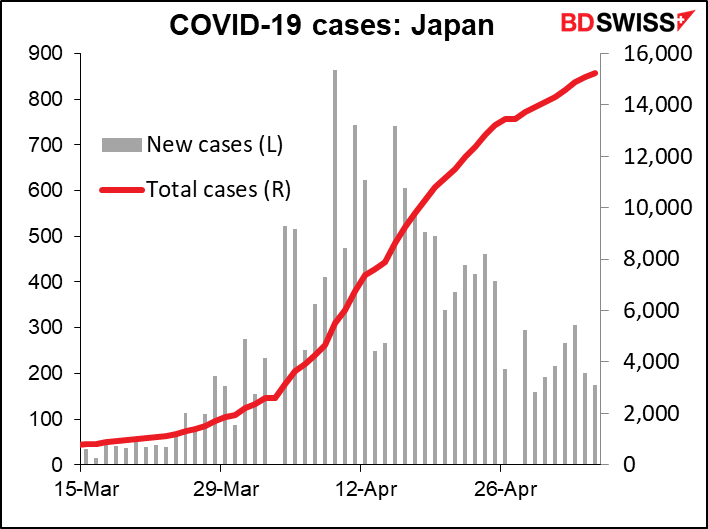 At the time of writing we await the results of the Bank of England meeting, which I discussed in yesterday’s comment. Instead of a press conference, the Bank will just publish a briefing with Gov. Bailey. I wonder what if anything that will say that isn’t already included in the Minutes of the meeting, which are released at the same time as the conclusion of the meeting anyway.

There are a number of webinars with various officials today – three with ECB members and three with regional Fed presidents.

The initial jobless claims are expected to continue their downward trend, but that’s cold comfort – they’re still forecast to be an astonishing 3mn people (that’s 3000k). Admittedly that’s better than 3.8mn the previous week, but still, it’s really, really terrible. It would bring the cumulative number of people who’ve lost their jobs since the beginning of March to 33.8mn. That’s around 21% of the total labor force in February before this all started. Since the labor force series already includes 3.5% unemployed persons, it would mean the unemployment rate is around 24.5%, fairly close to the Depression high of 24.9%. What’s particularly worrisome recently is increasing signs that many of these layoffs are not going to be temporary – that a lot of these jobs are likely to be lost for good. That means the recovery will be a lot slower than the markets had expected. 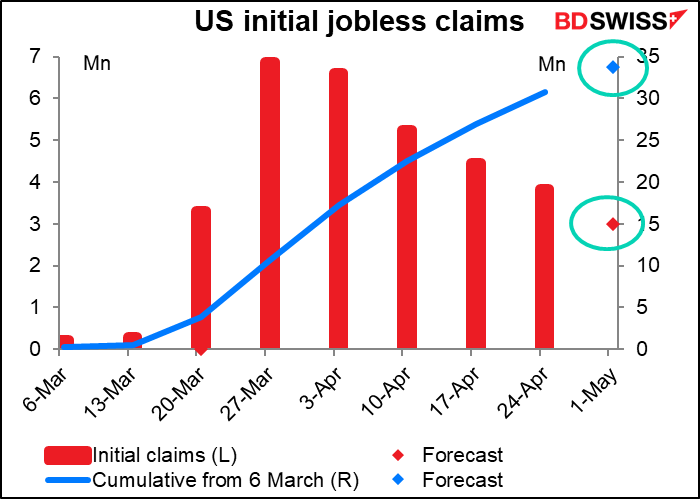 As always, I recommend Len Keifer’s animation of the jobless claims, although it hasn’t been updated for the latest data. Still it will give you a feel for how extraordinary the times we’re going through are.

Overnight, Japan’s labor cash earnings are expected to show a sharp deceleration in the growth of earnings to almost no growth from a year ago. Does it matter? Probably not to the FX market. In fact if I were a trader in Tokyo and I had to go to the bathroom a few minutes before this figure came out, I’d probably go anyway. I don’t think it moves the market. I don’t think most people care about it. Then why do I bother writing about it? Well, first off it should move the market, or at least in other countries and at other times it does – certainly everyone watches the equivalent data series from the US and UK. Secondly, my daughter is in Japan and will be entering the labor force in the next year or two (I hope) and I want to keep track of it for my own interest. But to be honest, you can probably just skip it. In fact I should apologize for wasting your time by writing this. You probably read it thinking it might help your trading, and now you’re disappointed and maybe even angry that you spent all this time reading something that’s really of no use at all. I’m really sorry. It won’t happen again. 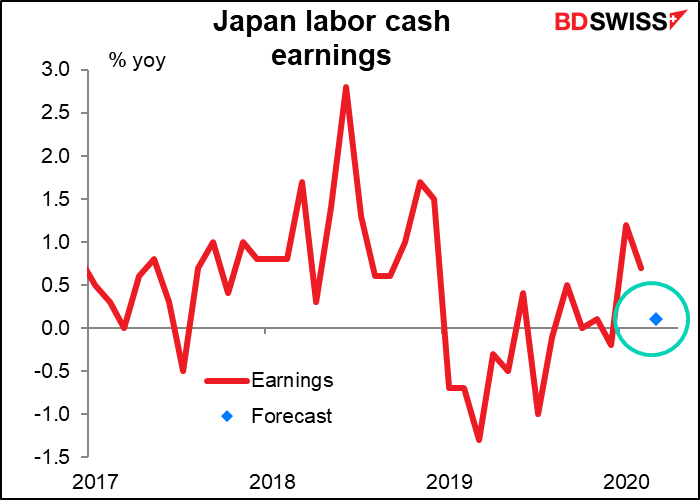 The Reserve Bank of Australia (RBA) publishes its Statement on Monetary Policy. This usually contains the RBA’s forecasts. However, I fail to see how anyone can make any forecasts in today’s environment. Gov. Lowe said in a recent speech that “Economic forecasting is difficult at the best of times. It is even harder at times like this when we are experiencing a once in a lifetime event. Given this, I don’t think it makes sense at the moment to focus on forecasts to the nearest decimal point, as we often do.” Perhaps they will follow the lead of the IMF in its recent “World Economic Outlook” and publish a fairly optimistic central scenario that assumes everything goes well and the lockdown is lifted soon, along with more pessimistic (some might say “more realistic”) scenarios, such as a longer lockdown or a “second wave” later in the year. The market could react to the forecasts, but then again, I’m not sure anyone believes any forecasts now. 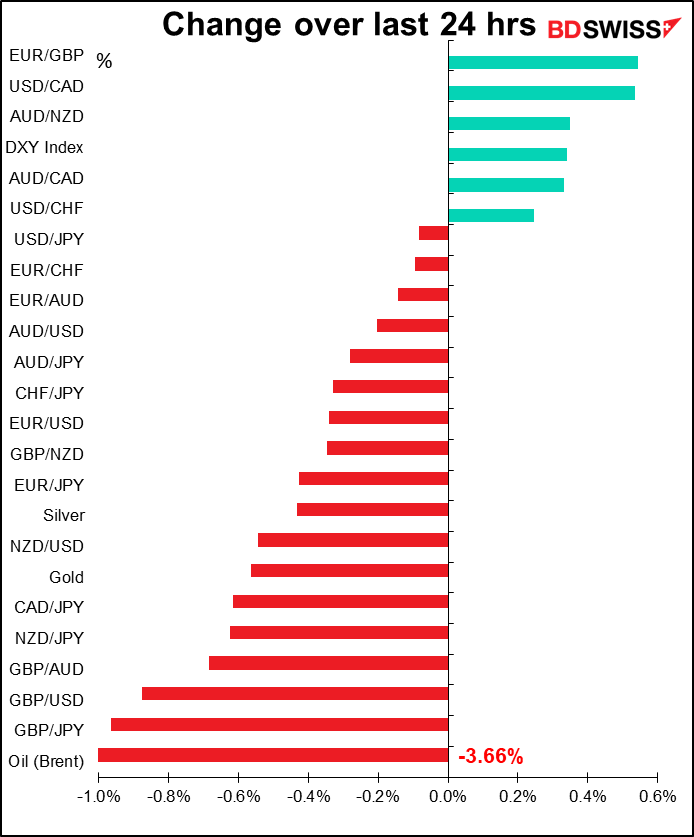