The week just ending has been dominated by two themes: the dollar going down and gold (and silver) going up. Many people say these two are connected, that it’s a vote of no-confidence in the dollar. Perhaps a harbinger of inflation to come?

There are certainly no signs of inflation from anywhere else. Inflation expectations remain well contained and the yields on 5- and 10-year Treasury bills hit a record low during the week. 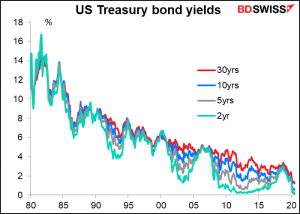 Furthermore the price of gold hit a record not only in dollars but in all the currencies of the major gold-buying countries. It’s not just a “fear of dollar collapse” story. 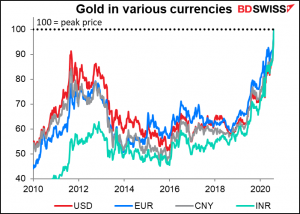 Meanwhile, the commodity currencies got a boost from healthy purchasing managers’ indices, which largely pushed back above the 50 line that marks the difference between contraction and expansion. As US House Majority Leader Nancy Pelosi said this week, we can see the light at the end of the tunnel, we just don’t know how long the tunnel is. 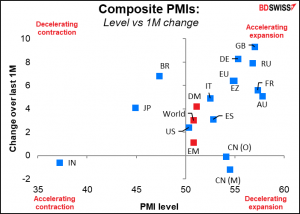 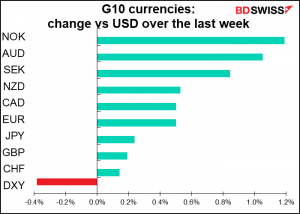 There are two major indicators from the US out during the coming week.

US retail sales on Friday is the most important indicator, as the health of the US consumer and his or her willingness (or ability!) to spend money is paramount (remember “my spending is your income”?) The data are expected to be encouraging. The headline figure is expected to show sales not only bouncing back but exceeding that of January and February. Sales excluding autos are expected to be almost back there. The report could be encouraging for investors. 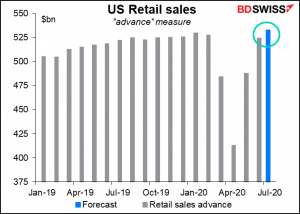 Wednesday’s US consumer prices (CPI) used to be one of the big indicators of the month, but nowadays it’s relegated to the backwaters. It was important because the Fed would alter its monetary policy accordingly, but now policy is on hold indefinitely. Fed Chair Powell said in his press conference that “I think fundamentally, this is a disinflationary shock…. I do think for quite some time, we’re going to be struggling against disinflationary pressures, rather than against inflationary pressures.” In that respect, we might look to further easing if consumer prices should start falling, but I think there’s little chance of anyone getting concerned if it ticks up a bit – which it’s not expected to do. 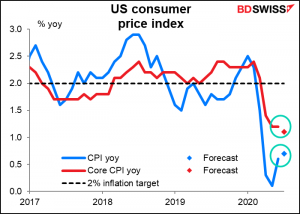 The market agrees with him: at the moment, inflation isn’t even expected to be back to the Fed’s 2% target five years from now. Moreover, the rethink of Fed policy that’s going on is likely to result in a new policy that will allow inflation to overshoot that target to make up for time spent below it. In other words, the Fed is already discounting slowing inflation and doesn’t care (or would welcome) faster inflation. 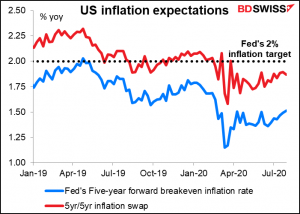 One place where US inflation matters to the FX market nowadays is in real yields, that is, the yield on bonds after taking inflation into account. The steady decline of US real yields, as measured by the yield on inflation-protected bonds, is thought to be one of the reasons for the weakening of the dollar recently. With nominal Treasury bonds hitting record lows, a fall in inflation could cause real yields to rise and thereby firm up the dollar – assuming that Treasury yields won’t go negative like other markets have. But maybe that’s an assumption we can’t make. Otherwise, falling inflation is likely to mean just further falls in Treasury yields and less reason to buy dollars. 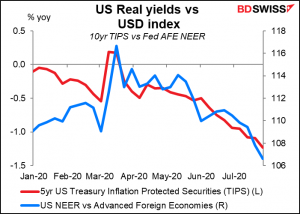 There aren’t that many other important US indicators out during the week, except of course the weekly US jobless claims. Claims this week showed the first substantial falls we’ve seen in a few weeks; let’s hope the trend continues (but from looking at the high-frequency data, I wouldn’t bet on it, unfortunately).

The Job Offers and Labor Turnover Survey (JOLTS) (Monday – no forecast available) is not particularly market-moving nowadays, but I think it’s interesting in the context of the debate raging in the US Congress on whether to extend the unemployment benefits. Many Republican representatives don’t want to extend the benefits because they’re afraid they create an incentive to stay home and collect unemployment instead of going back to work. The fact that in May, the last month available, there were 5.4mn job openings and 29.3mn people getting unemployment benefits – rising to 32.0mn in June – doesn’t seem to influence their thinking, unfortunately. 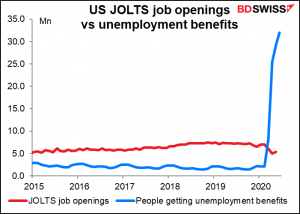 EU-wide industrial production on Wednesday will be the main indicator for the EU during the week. Production is expected to bounce back further, to a little bit higher than March’s level but still below the pre-pandemic high-water mark. 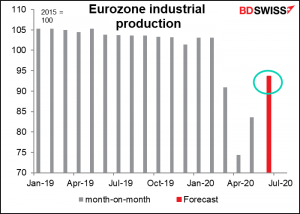 That’s about exactly where it should be, according to the EU manufacturing PMI.
Signs of a rebound in EU output may help keep EUR/USD in an uptrend. 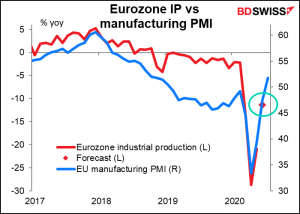 The second estimate of EU-wide 2Q GDP will be announced on Friday, but that’s rarely revised significantly.

The monthly GDP figure isn’t that closely watched, according to the Bloomberg gauge, but this month we get the Q2 GDP figure, which is a biggie, as it is everywhere. At the time of writing there’s no recently updated “consensus” forecast available, but there are long-running forecast series available that aren’t necessarily updated day-to-day. That series says the market is looking for a relatively steep decline of -18.9% qoq. This compares unfavorably with -12.1% qoq in the Eurozone and -9.5% qoq in the US. 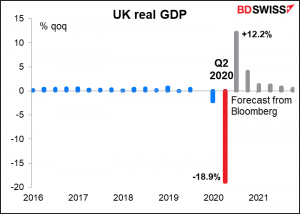 The recovery in Q3 though is expected to be faster, but not enough to allow Britain to catch up to the other countries. (Note: Japan’s Q2 GDP is also a forecast. It will be released on Monday the 17th.) 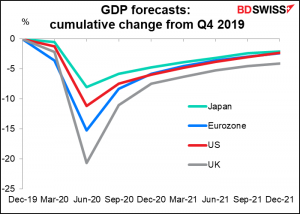 Japan too has several important indicators out during the week, including current account and Eco Watchers’ Survey on Tuesday, producer prices on Thursday, tertiary sector index on Friday, and as mentioned above, Q2 GDP on Monday the 17th. (so we’ll discuss that next week). Among these, the current account is the most closely watched – it’s expected to show a small increase in the seasonally adjusted current account surplus, which could be supportive for the yen. (Oddly enough, the market pays more attention to the not-adjusted version. That’s probably a hangover from the days many many years ago when the Japan government’s seasonal adjustments weren’t particularly sophisticated. The point though is that you should pay more attention to how actual NSA figure compares with the forecast than to how the SA figure compares.) 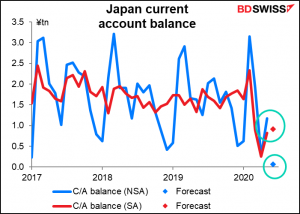 The tertiary sector index is an index of the service industry, such as wholesale and retail trade, real estate, and health care. It comprises 74% of GDP so it’s quite important for Japan, although I’m not so sure how much the FX market keys off of it. After several months of steep declines (as you can well imagine), it’s expected to make a dramatic leap. Don’t be fooled, that wouldn’t even bring the index back to where it was in March. Nonetheless, signs of a rebound should be positive for the Japanese economy, although whether that translates into positive for the yen is always a question – a higher Tokyo stock market often means a weaker yen thanks to the risk-on, risk-off phenomenon. 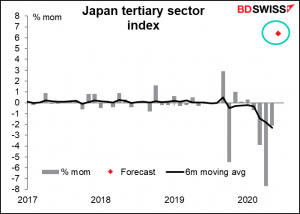 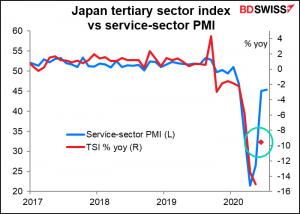 Finally, China announces its inflation data on Monday and its usual monthly trio of retail sales, industrial production, and fixed asset investment on Friday. These are important for setting a general “risk-on, risk-off” tone for the markets globally.

Industrial production didn’t dip significantly into negative territory and is now almost back to normal – in Q4 it averaged 5.9% yoy growth, in July it’s forecast to be up 5.1% yoy. Retail sales is probably the key here as people try to get an indication of when things might get back to normal in their country. . It doesn’t seem like China has had either the pre-lockdown stockpiling nor the surge of pent-up demand post-lockdown that we’ve seen in other countries. Retail sales flat year-on-year, as the market predicts, would be an achievement, in my view, and could help to boost investor sentiment in a “risk-on” fashion. 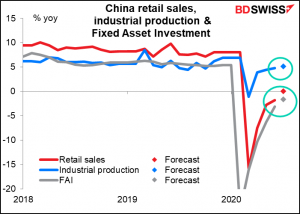 As for central banks, there’s only one G10 meeting, and that’s the Reserve Bank of New Zealand (RBNZ) meeting Wednesday.I expect that they will follow all the other G10 central banks recently and keep policy unchanged. The real action will be in the accompanying Monetary Policy Statement, as it was this week with the Bank of England.

In the statement following the June meeting, they said

“The Monetary Policy Committee is prepared to provide additional stimulus as necessary. As well as potentially expanding the Large Scale Asset Purchase (LSAP) programme, the Committee continues to prepare for the use of additional monetary policy tools as needed…We will outline the outlook for the LSAP programme and our readiness to deploy alternative monetary policy tools in our August Statement. We are committed to meeting our inflation and employment mandate.”

The last line is important because later in the Minutes, it says “…the Committee agreed that it is not yet clear whether the monetary stimulus delivered to date is sufficient to meet its mandate.” If they decide no, it isn’t, then they’ll have to think of the next step.

What might the next step be? The minutes said the Bank’s staff working on measures such as “a term lending facility, reductions in the OCR, and foreign asset purchases, as well as reassessing the appropriate quantum of the current LSAP.” Two of these stand out. First, the Committee has specifically not ruled out negative rates, so a further reduction in the official cash rate (OCR) is still a possibility even though it’s currently at 0.25%. No “effective lower bound” here!

Second, they mention a dramatic one: foreign asset purchases. This would be importing the Swiss National Bank (SNB) playbook into New Zealand. As the graph shows, the SNB started intervening heavily in the FX market at exactly the same time that it instituted negative interest rates. It cut the lower bound of its policy rate to -0.75% from 0% in December 2014 (and to -1.25% the following month). In December, when rates first went negative, reserves jumped 7%. From November 2013 to November 2014, FX reserves grew 6.2%. From November 2014 to November 2015, they grew 22%. And they’ve kept on growing ever since. 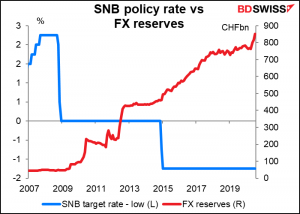 This is of course the quintessential “beggar thy neighbor” policy that most countries try to avoid, at least on the surface (Japan does it much more subtly). The reason Switzerland has been able to get away with it and New Zealand probably could too is because they’re tiny countries. No one really cares if New Zealand runs a big trade surplus because it’s not going to be that big in the scheme of things. In fact, last year their trade was well balanced: they ran a tiny surplus in trade in goods and services of NZD 266mn.

As a result, all eyes will be on the Monetary Policy Statement to see what tricks they have in store for us. Any hint that they might consider foreign asset purchases as a tool of monetary policy would be negative for NZD, I should think.