You are at:Home»MARKET PREVIEW»USD stronger on China-US tensions; light schedule until tomorrow morning 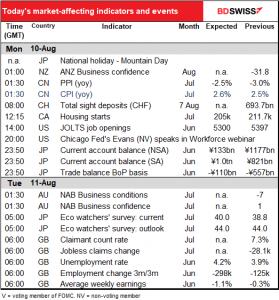 Market Recap
It’s hard to say whether there was a “risk-on” or “risk-off” market Friday. Rising US-China tension as Trump ordered bans on TikTok and WeChat was the main “risk-off” factor. (You may think these bans are unreasonable, but remember that Google, Gmail, Facebook, the New York Times and I don’t know what else are not accessible in China, so it is not unprecedented and not one-sided.) On the other hand, the better-than-expected US nonfarm payrolls (better than expected, but not necessarily good) were a “risk-on.” The S&P 500 closed little changed while NASDAQ was lower. Asian stocks are mixed this morning. In short, no clear signal on risk appetite.

It looks as if USD gained on the “risk-off” sentiment and got a further boost from the payrolls, which were up 1763k vs 1480k expected. It was particularly significant that private payrolls also beat expectations, rising 1462k vs 1200k expected. As I mentioned Friday, private payrolls are less distorted by the seasonal pattern of school employees being laid off in the summer and so are a better reflection of the underlying trend in employment. EUR/USD, which had been challenging 1.19, is now trading just below 1.18. Naturally, since I have a big life insurance payment to make in the US.

CAD was once again the biggest loser of the day – what the market gives, the market takes away. (CAD was the best performer Tuesday, 2nd best Wednesday, worst performer Thursday & Friday). Canada announced CAD 3.6bn in retaliatory tariffs against the US as the trade war between the two countries intensified. Oil was down, although not enough to justify by itself the large drop on the currency. CAD got some help from better-than-expected employment data on Friday (+419k jobs vs +380k expected, unemployment rate 10.9% vs 11.0% expected). CAD is now the worst-performing G10 currency so far this year.

NZD was the best-performing currency on a trade-weighted basis, but all that means really is that it fell less vs USD than AUD did. It gained on the crosses but NZD/USD was higher (i.e. NZD weakened vs USD). The fall in the ANZ business confidence index (-42.4 vs -31.8 previously) didn’t seem to have much impact.

There are two things to watch for in US politics this week. One, Trump signed several Executive Measures for pandemic relief, including a federal eviction ban, a payroll tax suspension, relief for student borrowers, and $400 a week for the unemployed. These measures are aimed at staving off financial collapse while Congress thrashes out the details. The problem is, these measures are illegal as the US constitution gives Congress, not the Executive Branch, authority over spending. It remains to be seen how this attempt to Trump Congress, as it were, goes over and whether any money is in fact distributed. If the measures are ruled illegal and no money is forthcoming – which I expect – then the US economy is likely to tank.

Secondly, Joe Biden, the all-but-assured Democratic candidate for President, is expected to announce his choice for his Vice President this week. He’s promised to choose a woman. If (when) Biden is elected he’ll be the oldest person ever to become President, so there’s a decent actuarial chance that his VP gets to be President. Or the aged Mr. Biden might step down after one term, as Lyndon Johnson did, and she runs. Or Biden serves two terms and then she runs. It’s kind of like Monty Hall and Let’s Make a Deal with the famous prizes behind three curtains, except behind one of the curtains is the Presidency and behind the other two is a good chance at it – a great game for whoever gets to play!

If you’re interested in reading more about this, The Hill, a newspaper about Congress, has an article on the main candidates (as does every other publication that covers US politics). The big question seems to be whether he goes for someone from the progressive (i.e. left) wing of the Democratic Party in order to capture all those Democrats who wanted a more left-wing candidate, or does he go with a middle-of-the-road type like himself to cement his hold on independents and disillusioned Republicans.

EUR/CHF has been fairly stable for the last few weeks, but that hasn’t allowed the Swiss National Bank (SNB) to keep out of the market. Or maybe the reason it’s been stable is that SNB has kept on buying? Given the euro’s recent strength, this is a pretty strong indication of the demand for CHF. Also of the SNB’s commitment to keeping the rate from falling despite the possibility of a backlash from the US. 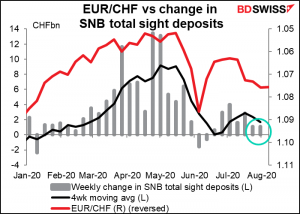 Canada’s housing market, like that of the US, has withstood the pandemic fairly well. Housing starts slumped in April, but rebounded in June back to the same level as February, before all the excitement began. July is expected to be down a bit, but not significantly and still above the six-month moving average. The Job Offers and Labor Turnover Survey (JOLTS) used to be important when Janet Yellen was Fed Chair, but now it’s a second-tier indicator with little market impact. Job openings were already trending lower at the beginning of this year, then plunged in the wake of the pandemic (as one might expect). They ticked up a bit in May but they’re expected to have fallen back a bit in June. This should be no surprise to anyone. In fact if anything, I’m surprised that there are still this many openings. 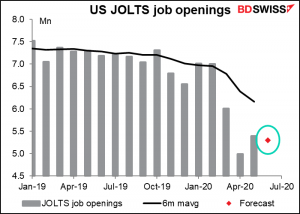 While the JOLTS isn’t that market-affecting, I think it’s useful to look at just to see how unrealistic the Republican complaints are about unemployment benefits being so high that they discourage people from going back to work. They haven’t answered the question of how the 31.3mn people getting unemployment benefits (July actual) can possibly all find jobs when there are only 5.3mn openings (June forecast). 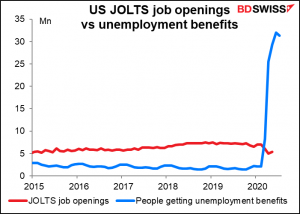 And that’s it for the European and US days! Now you can go for a walk, take a nap, or, we would recommend, watch some of our training videos and upgrade your game.

If you get really engrossed in the videos, you might stay up late enough to watch the Japan current account figures. If so, you should focus on the not seasonally adjusted number, which for some reason is the one that Japanese investors focus on (probably a habit left over from the old days when Japan’s seasonal adjustment math wasn’t very sophisticated). The NSA figure is expected to be down sharply, but the SA figure – which most people would use when evaluating a data series like this – is expected to be up somewhat. In any case, it’s how the actual compares with the forecast. The actual for the SA figure probably isn’t enough to move the needle in either direction so if I were you, I’d go back to watching the videos – or go to sleep already. 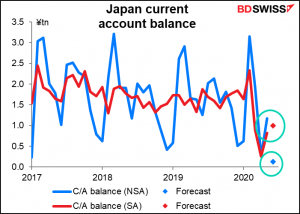 As long as you’re up, you might as well watch the National Australia Bank (NAB) business sentiment indices. There are no forecasts for them, but they do sometimes move the markets. Last month, business confidence moved about zero even though business conditions didn’t. After the lockdown in Victoria, will this persist? Stay tuned! 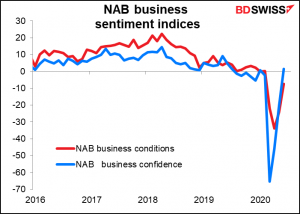 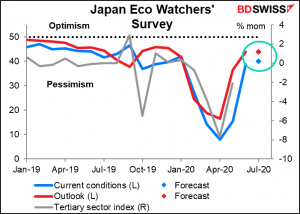 Then in the early European morning, far too early for me, Britain announces its employment data. The data are expected to be bad – in particular, the drop in employment is expected to be the largest since the data series started in 1990 – but still it probably underestimates the real situation in Britain. The expected -271k fall in employment compares with a -650k drop reported by the Revenues & Customs department, and all the other survey data indicate a big rise in unemployment. 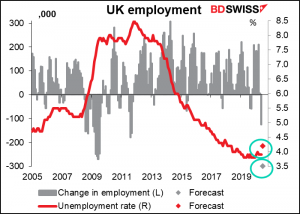 According to Bloomberg’s index of high-frequency data, Britain has recovered about as much as the US, which is to say not that much. While there are of course major differences in their employment systems, particularly the British government’s furlough scheme that pays companies to keep people in work, it would still be amazing to see such a huge difference in employment in the two countries if economic performance is similar. 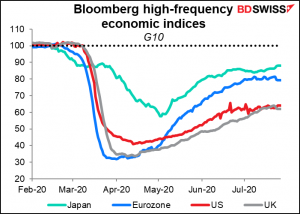 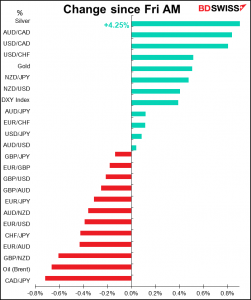