You are at:Home»MARKET PREVIEW»CAD down on aluminum tariffs, TRY hits record low; US nonfarm payrolls 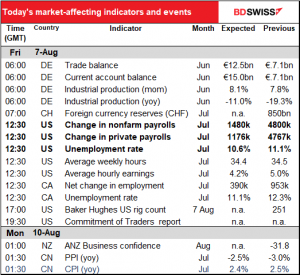 We finally got the retracement in oil and CAD that I was expecting a few days ago, but with a vengeance!

The fall in CAD (rise in USD/CAD) wasn’t necessarily related to oil however. It happened because Trump reimposed a 10% tariff on unprocessed Canadian aluminum. Trump probably hopes that the move will help to portray him as a strong defender of American jobs, but it may get him into trouble with the general beer-drinking public, who may see the price of their aluminum cans going up a bit. Moreover, not all US aluminum producers were in favor of the move, although their response might be influenced by whether they have operations in Canada as well as the US.

Aluminum is the only base metal traded on the London Metal Exchange that hasn’t yet recovered to its starting price of the year, thanks to the lockdowns and increased Chinese production. 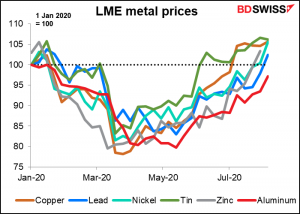 The move didn’t hurt the other commodity currencies, which both gained as well.

USD was up, which I consider to be nothing short of miraculous, considering that the negotiations over extending unemployment benefits in the US are at an impasse and US-China tensions are increasing. Nonetheless there was some good US news yesterday as well, namely a) a larger-than-expected decline in both initial and continuing jobless claims; b) the first decline in US household debt since 2Q14; and c) the State Department lifted its international travel advisory (although it remains to be seen which countries will allow US travelers in). The news supported a rally in equities and the S&P 500 finished within 40 points of its February record high, while global stock markets recovered their opening levels of the year. 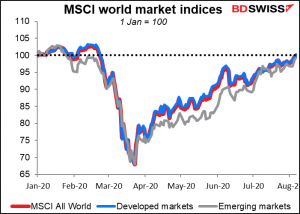 I admit, that still doesn’t answer the question of why USD was up since a “risk-on” environment tends to be negative for the dollar recently. It may be that the better-than-expected jobless claims sparked hopes for today’s US nonfarm payrolls, a crucial figure determining whether the US economy is still on the recovery path. (see below).

GBP gained after the Bank of England was more hawkish than expected. It kepts its policy rate and purchase targets unchanged, as was widely expected, and promised to maintain its accommodative policy. The economic outlook emphasized the risks, but at the same time was more optimistic than before; they said they expect Q3 output to be 9% below ts 2019 Q4 level, compared with 18% lower in their scenario back in May. Despite its caution on the outlook, the Monetary Policy Committee was vaguely hawkish in that they tapered their pace of bond-buying and downplayed the possibility of introducing negative interest rates.

The troubled Turkish lira (TRY) fell further, hitting a record low vs USD despite the Turkish central bank seeking to reassure the market with a statement alleging that the “economic recovery has gained pace.” I’m not so certain. The country’s FX reserves are depleted, money isn’t coming from abroad, tourism revenues have collapsed (as they have everywhere), and prices are rising. While the central bank has been cutting interest rates at home, offshore rates were squeezed higher and the overnight rate spiked above 1,000%. I think the government would probably prefer a weaker currency to higher interest rates and so will choose to let the currency take the strain.

What we were waiting for yesterday

Rats! Yesterday’s big announcement in New York had nothing to do with the Trumps. The New York Attorney General is aiming to shut down the National Rifle Association (NRA) for various infractions of the laws governing nonprofits.

On the one hand, this is a great idea because it’s the NRA and its money that prevents US legislators for voting for common-sense gun laws. I mean, these guys are against anything that would prevent a private individual from owning a bazooka, much less an AK-47.I’m a vegetarian and hunting isn’t very high on my list of entertainments, but I accept that a lot of people enjoy it and it’s legal. So I have no problem with people owning guns, But really, do you need an AK-47 to shoot a deer? According to the NRA, yes. If these people are out of the picture and no longer financing political campaigns, then maybe American politicians will have the guts to write the kind of laws that most Americans – even gun-owning Americans – approve of, such as limiting the sale of automatic weapons, requiring background checks, etc. And maybe more Democrats will have a chance at winning without the money and muscle of the NRA backing their opponents.

On the other hand, if we were to draw a Venn diagram, the circle with NRA supporters in it would probably be entirely enclosed within the circle of Trump supporters-. The judge has given Trump a perfect “wedge” issue to rally his voter base: vote for me otherwise the Democrats are coming for your guns. This may encourage donations to Republicans and encourage some people to vote for Trump who might otherwise at least have sat out. I’m therefore unsure of how it will affect the upcoming elections.

It’s US nonfarm payroll day again! Forecasts weren’t that optimistic originally and they have been steadily revised down over the week, especially after Wednesday’s ADP report came out much lower than expected (+167k jobs instead of +1200k as expected).

Furthermore, much of the high-frequency data has been discouraging. The (now discontinued) weekly Household Pulse Survey, which the Census Bureau started doing “to quickly and efficiently deploy data collected on how people’s lives have been impacted by the COVID-19 pandemic,” showed that employment dipped right during the week when the July employment survey was taking place. 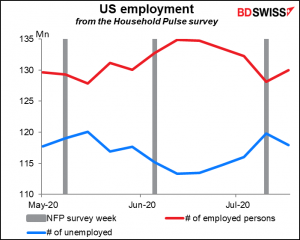 That may be because it just happened to be the week when virus cases were peaking. 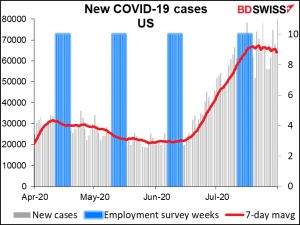 On the other hand, the Homebase data of employment at small- and medium-sized businesses did at least show an increase in the number of people working from the June survey week to the July week, even if it does seem to have leveled out after that.

The St. Louis Fed published a research note this week that made a fairly persuasive case that the Homebase data has a strong correlation with the monthly Current Population Survey, which is the basis for the unemployment rate.

The Homebase data is only available for free with a two-week lag, meaning I only have it until 21 July. The data is starting to show employment turning down. Apparently by the end of the month, employment is lower than in June. There could be even more trouble in the August NFP figures. 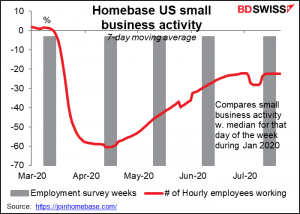 OK, so let’s get to the bottom line: the market has been revising down its forecast for the NFP but still expects 1.48mn new jobs. This would be a disappointing decline from +4.8mn in the previous week, but at least it would be positive. 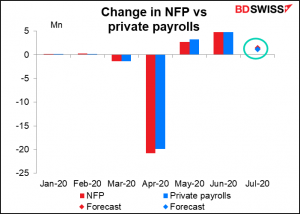 One reason the market is expecting a rise in jobs is that the NFP data will be boosted by seasonal factors. Remember that the numbers that are reported are not raw data, they’re seasonally adjusted. Those adjustments are based on usual seasonal patterns, but they may be out of whack with what’s happening now because the virus is causing employment to behave quite differently than normal.

In the US, public schools usually close in July and many people in education are laid off. The seasonal adjustment factors add these people back into the seasonally adjusted figure. This typically amounts to 1.2mn-1.3mn jobs. But this year, many of those layoffs took place earlier than usual as schools shifted to virtual classrooms. That means the seasonal adjustment factors will add back in people who lost their jobs in previous months, not in July.

Note though that most education jobs are government jobs. That means the seasonal adjustment will affect the total nonfarm payrolls figure but not the private payrolls figure. Watch the latter if you want to see what’s really going on with employment. Private payrolls are expected to be up 1176k vs 4767k in June, but I think it could be much lower.

Moreover, this upward seasonal adjustment doesn’t happen in August. The figure next month could therefore be a big shock. 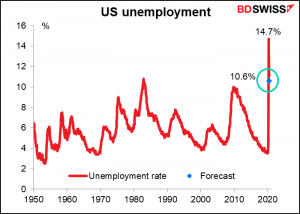 The real unemployment rate is no doubt higher. Even the Bureau of Labor Statistics admits that a lot of workers are misclassified as “employed but absent from work” instead of “unemployed on temporary layoff.” Furthermore a lot of dropped out of the labor force as they don’t think it’s worth even looking for a job now, and only people who are actively looking for a job are classified as in the labor force.

The average hourly earnings figure is also heavily distorted, because most of the people losing their jobs have been lower-paid workers. It’s therefore being boosted by survivor bias. But I don’t think the market is even looking at that figure now so I wouldn’t make a big deal about it.

What kind of impact does the NFP figure have on the FX market? Over the last year on average it hasn’t been that effective. On average, the dollar has fallen (EUR/USD has risen) over the next few days regardless of whether it was a positive surprise or a negative surprise. The move has reversed after a few days in the case of positive surprises, however. (Again, on average.) 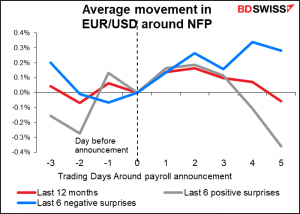 I stress “on average” because each month has been different, as you can see. 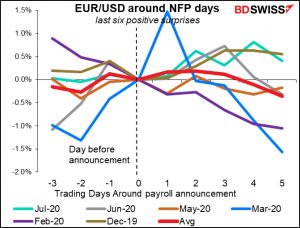 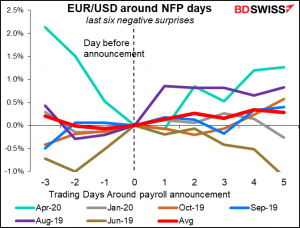 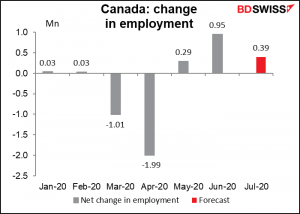 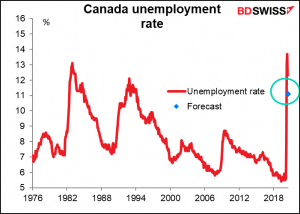 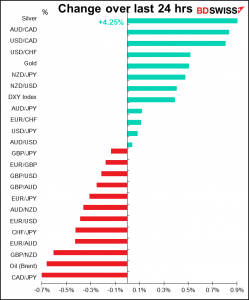