You are at:Home»MARKET PREVIEW»US employment situation, NZD down on hints of more loosening to come; PMIs 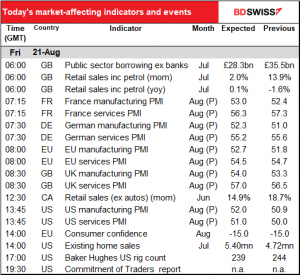 GBP was the best-performing currency. EUR/GBP broke through 0.90 and both hedge funds and real-money investors were buying. Why? Maybe because once again, there is no indication that the Brexit talks are moving any closer to an agreement. Just kidding.It is a fact though that they held talks yesterday and no progress was made. The two chief negotiators will meet again today for breakfast, although I doubt if they can even agree on where to eat. Nonetheless, it seems that the market is bored with Brexit and has factored in the likely endings: either Britain crashes out of the EU without an agreement, or PM Boris “The Umbrella” Johnson folds, as he did with Northern Ireland.

US initial jobless claims came in worse than expected – they rose 135k instead of falling 48k as expected. The figures were distorted by seasonal adjustment factors though. Usually around this time a lot of teachers and other school employees go back to work, so the seasonal adjustment factors assume a big drop in claims around now. But this year it didn’t happen to the usual degree and so after seasonal adjustment it looks like things are worse than they really are. But notice that claims under the Pandemic Unemployment Assistance (PUA) program, which extends aid to the self-employed and others who don’t qualifiy for regulare unemployment benefits, also rose, and those figures aren’t seasonally adjusted. So it’s not just a technical issue. 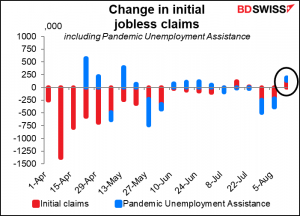 In fact, yesterday the US Internal Revenue Service (IRS), the agency that collects taxes, forecast that there will be about 37.2mn fewer jobs this year than it had estimated last year. Job losses will persist at least through 2027, it forecast, with about 15.9mn fewer jobs that year than it previously estimated. The forecasts are contained in the IRS’s estimates of how many tax forms it expects to receive.

The initial impact of the jobless claims on the FX market was enlightening – EUR/USD, GBP/USD and USD/JPY all fell on the news. What does that mean? USD strengthened vs EUR and GBP but fell vs JPY. In other words, bad news for the US triggered a “risk aversion” response that sent USD higher vs most currencies but pushed JPY up even more. The impact didn’t last and USD weakened overall during the day. Nonetheless, it’s a reminder that the immediate response to indicators nowadays may not be what traditional economics and traditioal relationships would suggest.

CAD gained as the new Finance Minister, Chrystia Freeland, (who is also the Deputy PM) announced that the federal government would extend the Canada emergency response benefit (CERB) by one month and revamp the employment insurance program to allow more people to receive financial assistance during the pandemic. The changes are estimated to cost CAD 37bn.

After its big fall on Wednesday, CHF recouped much of its losses. Once again EUR/CHF couldn’t hold the 1.08 level and fell back to trade this morning around 1.0780 or so. This makes me very nervous about the currency. I don’t know how much room there is for appreciation, given the Swiss Natoinal Bank’s intervention, but it looks like it will be a hard slog for it to depreciate.

On the other hand, NZD is the worst-performing currency this morning after Reserve Bank of New Zealand (RBNZ) Assistant Gov. Christian Hawkesby delivered a speech, COVID-19 and the Reserve Bank’s Balance Sheet, in which he reiterated that the central bank’s balance sheet was likely to grow more and that they stand ready to use other measures, such as a negative official cash rate (OCR). “We recently expanded our LSAP programme up to $100 billion and are preparing the groundwork to use additional tools if needed such as a negative OCR or Funding for Lending Programme (FLP) in order to achieve our remit,” he said. (LSAP = Large Scale Asset Purchase).

The RBNZ has been one of the most aggressive central banks this year in expanding its balance sheet. It was busy expanding it in January and February even before the pandemic hit. The RBNZ clearly doesn’t care abou the externalities of its domestic monetary policy; if anything, a weaker currency is seen as a feature not a bug. NZD has been the worst-performng currency so far this year and I don’t see much on the horizon to improve its performance. 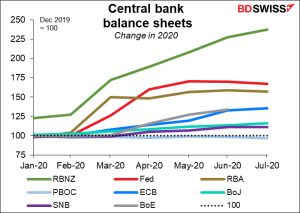 We already discussed the early-morning UK indicators in yesterday’s comment. UK retail sales came in better than expected (+3.6% mom vs 2.0% mom expected for sales including petrol), which should be GBP-positive.

That means we start off with PMI day!!! Yes, it’s time for the preliminary purchasing managers’ indices (PMIs) from the major industrial economies.

We already had Japan’s PMIs out overnight. They were pretty depressing – the manufacturing PMI advanced 1.4 points to 46.6 but the service-sector PMI actually fell 0.4 point to 45.0, leaving the composite index unchanged at a dismal 44.9. Japan remains the major industrial outlier, with both its PMIs still well below the 50 line that marks the difference between contraction and expansion. In other words, things are still getting worse in Japan, whereas in most other countries they’ve at least stabilized. 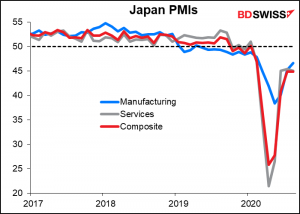 Looking at the others, it appears that the market expects manufacturing to continue to improve everywhere, albeit at a slower pace than before. But the service sector is expected to slide back a bit in Europe. 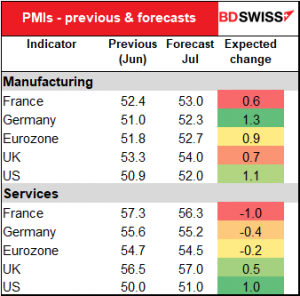 Of course, for the US PMI to be at 50, the service sector doesn’t have to be back to normal – it only has to stop contracting. And admittedly, even if the service-sector PMIs in the Eurozone do slip back as forecast, they’ll still be higher than what the market is expecting for the US, which is also consistent with this data.

Meanwhile, restaurant bookings in the UKS are back to normal, thanks in part to the government’s actions to encourage people to eat out and otherwise entertain themselves. That probably explains why the market expects the UK to have the highest of the service-sector PMIs. 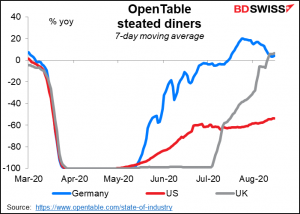 Canada’s retail sales (excluding autos) are expected to bounce back to an even higher level than they were before the pandemic hit. The figures should be no surprise however as Statistics Canada released an advance estimate of June retail sales along with the May figure. No surprise that their estimate of +24.5% mom is also the market consensus for the figure including autos. (I go with the ex-autos figure because I’ve found that has the best correlation with the subsequent movement of the FX market.) 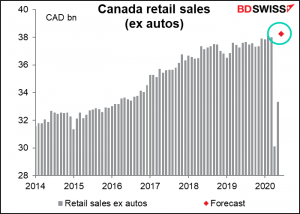 Eurozone consumer confidence is forecast to remain unchanged. That would correspond with what we’ve seen elsewhere. In the US, the University of Michigan consumer sentiment survey was almost unchanged in August (72.8 vs 72.5 previously), while last night’s UK consumer confidence was unchanged at -27 (vs expected improvement to -25). I guess “unchanged at a bit better than before” is the best we can hope for when the path of the virus is so uncertain. 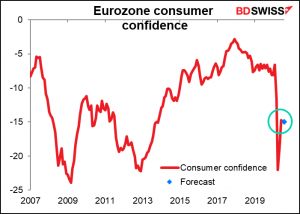 Finally, US existing home sales are forecast to rocket 14.6% mom back up nearly to pre-pandemic levels (the forecast of 5.40mn annual pace of sales compares with an average of 5.59mn in January and February). This would be consistent with everything else we’ve seen from the housing sector. That doesn’t explain though why the forecast for new home sales, which will be released next Tuesday, is expected to be down 0.1% mom. My guess is either a) there simply aren’t enough new homes to sell, or b) the figure will be revised up later this week. (In fact it has been revised up somewhat ; when I first wrote this blurb, the forecast for new home sales was -2.6% mom.) 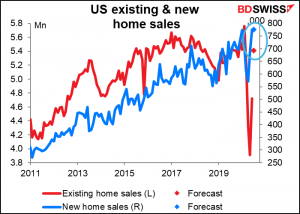 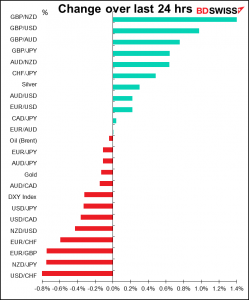