You are at:Home»MARKET PREVIEW»FOMC minutes fail to provide hoped-for clarity, push USD up; US jobless claims 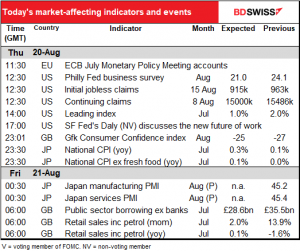 Market Recap
Alas, the FOMC minutes failed to provide the clarity about how the Committee intends to change its policy framework that everyone was hoping for. All we got were two paragraphs that basically said they were still discussing things. As for when we might get some answers, it’s still unclear. They said it “would be appropriate at some point” to provide further clarity on the outlook for rates. When is “some point”? At the same time though, they said they should finish their policy review “in the near future.” That seems to me to bring it closer than at the last meeting, when they said they were hoping to clarify matters “at upcoming meetings.” Can we expect some statement at the September meeting?

As for which way they are leaning in the discussions…not much clarification there, either. The only thing they were specific about was that “most” members were not in favor of yield caps and targets, the “yield curve control” (YCC) that Japan and Australia have plumped for. They thought that in the current environment, the costs were high and the benefits uncertain, but that YCC “should remain an option” that they can revisit in the future if things change.

Otherwise, the minutes noted that they discussed various changes that they could make to their forward guidance: basing it on various economic outcomes, such as inflation or unemployment rates, or setting calendar-based guidance, or some combination of the two. This is the average inflation targeting regime that many people have been expecting them to switch to. It’s significant too that only “a number of participants” discussed these matters. That doesn’t sound like a very urgent discussion. Compare that with how “a majority of participants commented on yield caps and targets” and “many participants” discussed how they might present their asset purchases “more in terms of their role in fostering accommodative financial conditions and supporting economic recovery.” I don’t get the feeling that they’ve reached any consensus yet on what to do.

The minutes were therefore supportive of the dollar and not supportive of risk assets. That’s because YCC is now off the table and average inflation targeting seems less likely any time soon. These two policies are designed to collapse real yields. The decline in real yields has been one of the major reasons why the dollar has been falling recently, so it’s easy to see why the minutes pushed the dollar back up and pushed gold down.

If you’re interested in reading the minutes for yourself, you can see them here.

Attention now turns to next week’s virtual “Jackson Hole” symposium, which will take place next Thursday and Friday on the theme, “Navigating the Decade Ahead: Implications for Monetary Policy.” It will all be streamed live, so for once we can all attend. Sorry, no fly fishing this time (which is why the meeting was originally held at this particular resort, to entice the-then Fed Chair Paul Volcker to attend.) Both Fed and ECB heads have used this symposium in the past to launch changes in monetary policy and so everyone has been expecting some big reveal from Powell, which would then lead up to a formal change at the September FOMC meeting, perhaps embodied in some changes to its quarterly Summary of Economic Projections, which will accompany that meeting. That would certainly be “in the near future.” However, the minutes suggest to me that either they haven’t reached consensus yet, or the consensus is not to make any changes. Still, we’ll all be watching.

CHF was the main loser on the day. This doesn’t seem to have been connected with the FOMC minutes however as the move started in the early European afternoon, well before the minutes came out. It seems to have been related more to an upmove in EUR/CHF through the 1.08 barrier, which triggered a squeeze on long CHF positions. Hedge funds are relatively long CHF compared to recent years, and their net longs equal some 60% of their total positions, which is heavily weighted towards the long side. 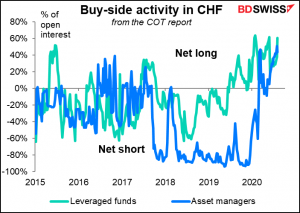 EUR/CHF has made several tries to sustain the 1.08 level this year but has been unable to stay over that line. Having now broken above it, we could get momentum players jumping in to keep pushing it higher. The threat of the US Treasury labelling the Swiss National Bank (SNB) a “currency mainpulator,” coupled with the “SNB put” if it turns out that the SNB isn’t worried about it, gives long EUR/CHF positions a pretty good risk/reward profile. If global demand picks up, then safe-haven demand for CHF is likel to dwindle and the currency could weaken further.

It was notable that gold fell much more than silver did (-2.05% vs -1.29%). Usually silver is the more volatile of the two. This is probably because gold is more sensitive to interest rates, while silver is more of an industrial recovery play. Copper was down only 0.28%, which would suggest that hopes for economic recovery haven’t been totally dashed.

Nothing on early in the day.

Around midday, the European Central Bank (ECB) releases the minutes of its 16 July meeting. But as the ECB hasn’t done very much recently and the divisions on the Governing Council between the doves and hawks are well known, I wouldn’t expect the minutes to revolutionize our way of thinking about much of anything. Furthermore, much of the economic discussion is already out of date thanks to more

The Philadelphia Fed Business Outlook Survey DI is expected to be down slightly, but so was Monday’s Empire State index, and in the event that was down sharply – although still in positive territory (3.7, down from 17.2; 15.0 expected). If the Philly Fed index is also lower, then the market may start to mark down expectations for Friday’s preliminary purchasing managers’ indices (PMIs) for the US. That could be USD-negative. 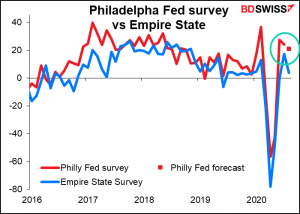 Now comes the biggie for the day, maybe the week: the weekly jobless claims data from the US. They’re expected to continue the slow but steady progress we’ve been seeing. The market forecasts only a miserable 48k decline in initial claims, which would be a bit disappointing after the 228k decline the previous week and 244k the week before that. Nonetheless, at least it’s expected to be below 1mn again. 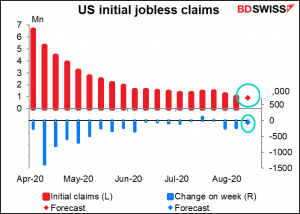 Continuing claims are also forecast to continue trending lower, with the market looking for a 486k decline from the previous week. That too would be a bit disappointing after the 604k decline the previous week and 861k drop the week before. Right direction, wrong pace. I’m not certain though whether the market would be more inclined to be disappointed about the slowing pace of decline, or just happy to see the figures continuing to decline. 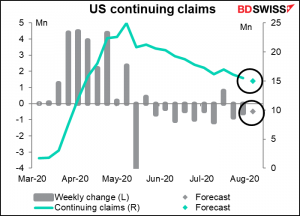 The US leading index is expected to be up 1.0%. I have no idea whether the leading index leads any more, or how much it leads by. I think this is one we’ll have to wait a few months more to see settle down before it can be useful again. In any case, it’s positive, which suggests growth is likely to continue positive. That’s a good sign. 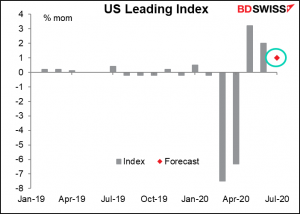 Overnight, the Gfk UK consumer confidence index comes out. This isn’t a big market-mover and in fact I’ve never paid attention to it before, but nowadays we’re trying to get any hint we can of how things are going. Consumer sentiment is an important part of the equation, because sentiment is quite fragile when people are going down the street at night ringing a bell and shouting “Bring out your dead!” Not quite that bad but you get the picture – without consumers feeling more confident, they’ll never spend money and the economy will never get going again. 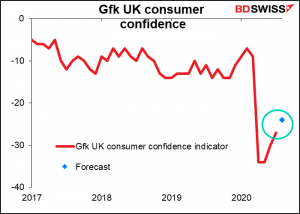 Then it’s Friday in Japan and we get the Japan national consumer price index (CPI), perhaps the King of the Boring Indicators nowadays, since a) it never changes much, and b) even if it does, people have already discounted the change because it was probably reflected in the Tokyo CPI, which came out a couple of weeks ago.

In this case the CPI is expected to accelerate marginally. It could even surprise on the upside, as the Tokyo inflation rate rose a bit more. But I doubt if it will make much of a difference. 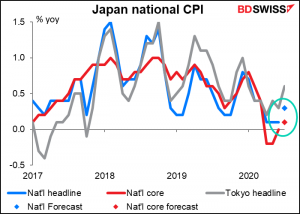 Next, the preliminary purchasing managers’ indices (PMIs) for the major industrial economies start with Japan. There are no forecasts for the Japanese PMIs, but they are closely watched, especially the manufacturing index (a Bloomberg score of 90.0).

Japan is unique among the major economies in that neither of its PMIs has returned to the 50 line that signals expansion. This despite the fact that its Q2 GDP fell by less than any of the others. The market will want to see Japan moving back into expansionary territory. 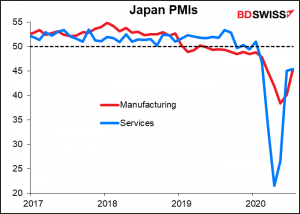 Then it’s back to sleep until Britain wakes up and it’s time for the early-morning UK indicators. 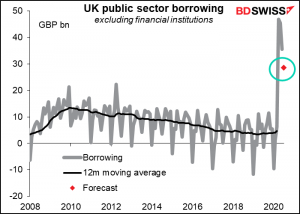 UK retail sales are expected to be back in positive territory on a yoy basis – great stuff! Maybe consumer confidence is coming back, or at least people are getting out of the house more often. We can expect an even better figure for August after the government took a variety of measures to get people out of their house and into the local pub, such as cutting VAT on entertainment and offering discounts for meals. The news could be positive for the pound. 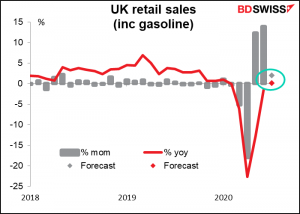 The level of sales is forecast to be slightly above pre-pandemic levels. 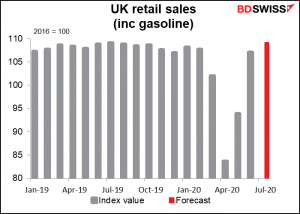 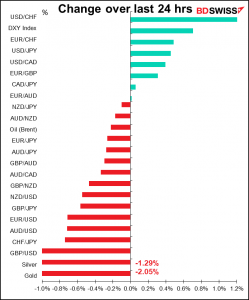