Boy what a day! I’ve rarely seen such huge moves in currency rates in a day recently.

It’s hard to say whether it was “risk-on” or “risk-off” or what. The dollar, the safest safe-haven, soared while the commodity currencies got hammered.

In a way it was the opposite of what one might expect: the currencies of countries with higher yields fell, while those that weren’t rising so much benefited.

USD led the way into the US afternoon, but then the market turned around sharply. US long bond yields plunged, with the 30-year bond rallying the most since November. That set the stage for a reversal in the blow-out in many bond markets.

Central bankers have started to push back on the idea of higher rates. We saw that in Australia, where the Reserve Bank of Australia bought bonds on Friday and again today, and in Europe, where European Central Bank (ECB) Chief Economist Lane (and the real ECB President, if some analysts are to be believed) cautioned that “it can be problematic if market optimism moves ahead of the current state of the economy,” while Executive Board member Schnabel suggested that a premature climb in real rates might necessitate additional policy support.

This morning rates are fairly steady and currencies rather stable from Friday’s levels.

It looks to me like the moves in bond markets were much too fast, but perhaps not too far. That is to say, they were quite sudden, but the levels of yields, particularly at the long end, are not too high if we do get the kind of growth that many economists are forecasting. Saturday’s announcement of a third vaccine authorized for use in the US, one that requires only one shot and can be stored in normal refrigerators, is yet another sign of hope that the pandemic may indeed be conquered not only eventually, but indeed this year. 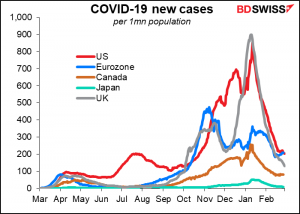 Countries are likely to recover from the virus at different paces and their central banks therefore lift interest rates at different paces. This should create a widening gap between the yields of different currencies that opens up possibilities for carry trades. I believe the currencies of countries with higher rates, notably the commodity currencies, will do better in such an environment.

The CoT report showed a big increase in GBP longs and a big cut in JPY longs. We can’t say this was necessarily a “risk-on” move, because there was also a substantial increase in CHF longs and no major increase in commodity currency positioning. Nor was it a consistent momentum trade; they were buying into the rally in GBP and selling the rally in JPY while buying CHF on the dips.

Sterling positions including options hit the highest level in three years, although futures alone (shown in graph) were still below last February’s peak.

Remember that the CoT report is based on positions Tuesday, before the big moves came on Thursday and Friday. 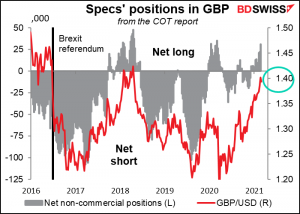 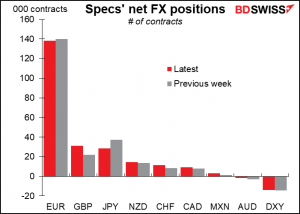 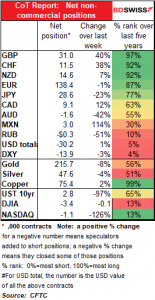 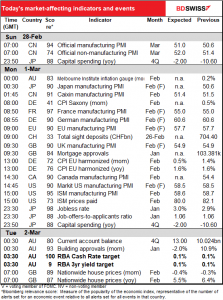 The main item on the schedule today is the Reserve Bank of Australia meeting overnight. It’s the first central bank that will have an opportunity to formally address the recent selloff in the bond market. See below for my full view on the matter.

Today we get the manufacturing purchasing managers’ indices (PMIs), as usual the final ones for the major industrial economies ((Japan, Eurozone, UK, US) and the first-and-only versions for other countries. The preliminary PMIs for the major industrial economies were released about a week ago. They are often slightly revised, but the revisions are usually not enough to be market-affecting. The focus then is on the other countries and the general tone: how many countries saw an improvement and how many are backsliding?

The initial figures for the major countries were encouraging. They were all in expansionary territory (over 50) and most were higher than the previous month. The only one to decline was the US. 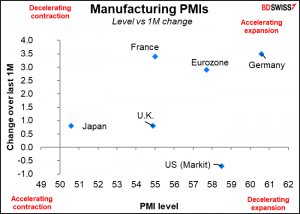 The Institute of Supply Management (ISM) version of this index for the US is expected to be little changed at a continued high level almost exactly the same as the preliminary Markit version (58.6 vs 58.5 for Markit). 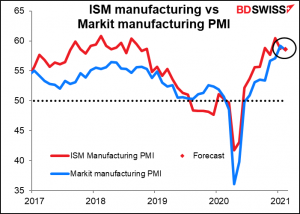 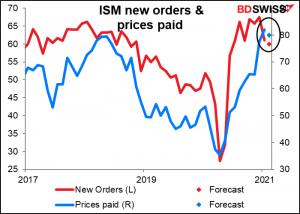 …because the ISM prices paid index has been a fairly good leading indicator of inflation in the past. 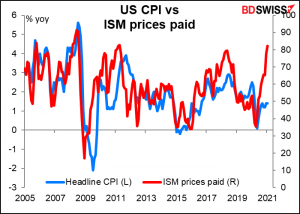 The Empire State manufacturing survey has shown an unusually wide gap between the prices that companies are paying and the prices that they can receive. This will either force them to put up their prices (= higher inflation) or put pressure on their margins (bad for profits & for the stock market). 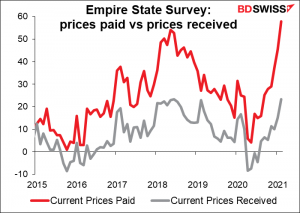 Other indicators out today include the redoubtable Swiss sight deposits. This will help us to tell whether the recent decline in CHF is due to the action of market participants “supernatural forces” in the stock market. Looking at the four-week moving average, there’s been virtually no change in sight deposits – i.e., little if any intervention – and EUR/CHF has moved up from 1.0810 to 1.0971. 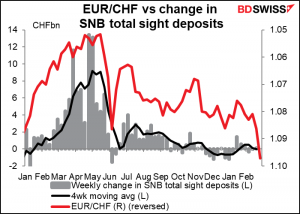 UK mortgage approvals are expected to come down from the lofty levels of November and December, but still remain unusually high as buyers rush to buy before the reduction in stamp duty, a tax on a property purchase, ends on March 31st. The government cut the tax last July in order to encourage people to move home after the first COVID-19 lockdown last year. There’s talk that the government may extend the break because of the backlog of purchases the increased demand has created. Tune in on Thursday when the UK Budget is announced! 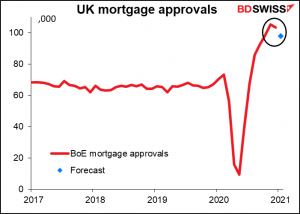 After the surge in prices last month, inflation in Germany is expected to settle down to a more normal pace, indicating that last month’s leap was indeed a one-off event. However it’s not expected to fall back. This may reassure the European Central Bank that perhaps they’re starting to achieve their goals. Then again, given the lack of any market reaction to the leap in Eurozone inflation last month, it looks like the market doesn’t have much faith that the move will last. 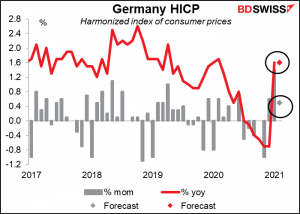 The unemployment rate is expected to tick up a bit, but it remains at relatively low levels. The job-offers-to-applicants ratio is forecast to remain unchanged at 1.06 for the third consecutive month. These would be pretty good numbers, considering the hit that the service sector took following the declaration of a state of emergency on Jan. 8th. 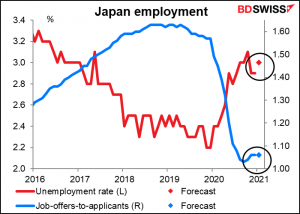 Capital spending in the Corporate Survey is expected to be down 2.0% yoy in Q4, a big improvement from Q2 and Q3 but still down. The figure is important because it feeds into the revised Q4 GDP figure, which will be released on March 9th. 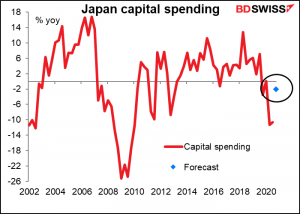 Australia’s current account and building approvals could prove market-affecting, but the big event of the day for Australia is of course the Reserve Bank of Australia (RBA) meeting. I dealt with this at some length in my Weekly Outlook, please refer to that for the details. The big question is whether – or probably, how strongly – they push back at the recent rise in bond yields in Australia. 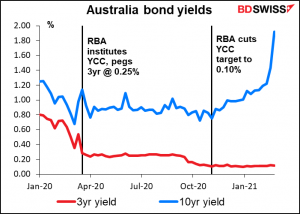 Markets will examine the statement closely for any signs that the Board may be contemplating a change in its approach to Yield Curve Control (YCC) and Quantitative Easing (QE). In Gov. Lowe’s “The Year Ahead” speech last month, he noted that the Bank’s policy of purchasing three-year bonds at the cash rate of 0.1% is aimed at supporting its expectation that they hold the cash rate steady at 0.1% for three years. That decision will have to be reviewed by the middle of this year so that they can decide whether to extend their buying from the April 2024 bond to the November 2024 bond. The market believes that they’re not going to do this, which would be tantamount to declaring that they won’t keep rates on hold for three years beyond April 2021.

I expect them to push back on these expectations, as several other central banks have started to do, and to reaffirm their commitment to keeping rates steady. That would probably weaken the AUD – temporarily. Over the longer term however I still expect carry trade inflows to push the currency higher, something that the RBA probably does not want (which is why they’re likely to push against the idea of rates moving higher).

Recently there hasn’t been unusual volatility in AUD on RBA days except in November, when they announced a slew of changes. We might not see unusual volatility  if they keep rates steady. On the other hand, the pushback against higher rates might be seen as an extension of their current policy and thereby engender a strong market reaction. 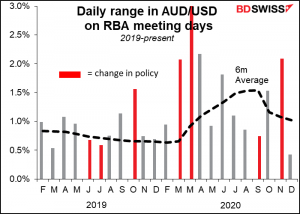 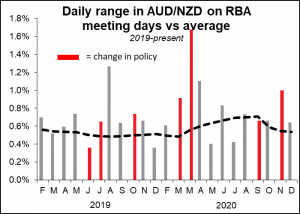 UK house prices have been rising thanks in part to the cut in stamp duty mentioned above. The Nationwide UK house price index is expected to show another mom increase, albeit not as much as toward the end of last year. 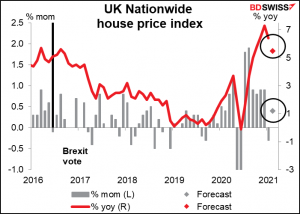 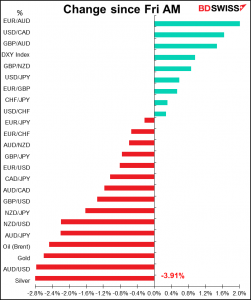