Looking at the performance of currencies so far this year, it looks like a typical “risk-on” move: the commodity currencies have gained, and the safe-haven JPY and CHF have weakened. GBP is the odd one out, as its path has been determined by the successful rollout of the vaccine in the UK. 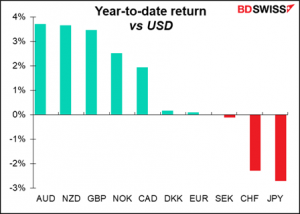 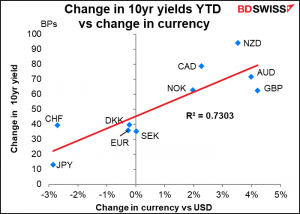 Such trades were hard to find during 2020, because interest rates were so similar around the world. What is a “high-yielding currency” when the highest 10-year yield is lower than 3-month interest rates used to be?

Six months ago, the difference between the highest-yielding 10-year bonds (Italy) and the lowest-yielding (Switzerland) was 144 bps. Today, it’s (NZD-DEU) = 211 bps. With many central banks still pledging to keep short-term rates low, investors may think it’s worth a try now. 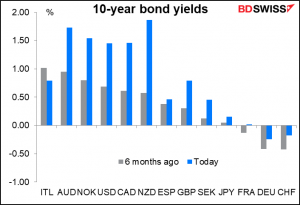 Carry trades were not particularly profitable from during 2019, and when the pandemic hit, they positively collapsed. But since then, they’ve been more profitable. 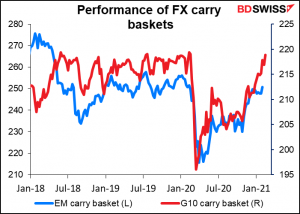 Over the longer term, carry trades tend to do better during calm periods but do badly when markets are volatile. With the global outlook becoming much better now that vaccines are available, and “reflation” is on everyone’s mind, interest rates are rising and diverging among countries, giving rise to opportunities for carry trades again. 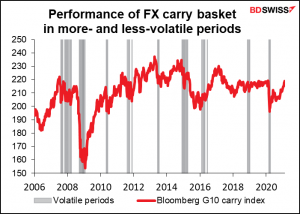 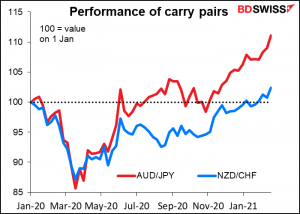 (NB: This report was written Thursday. Because of the violent movements since then, some of the above graphs, such as the year-to-date performance, are no longer strictly correct. We believe the overall point remains valid however as the leap in bond yields only increases the yield differential among currencies.) 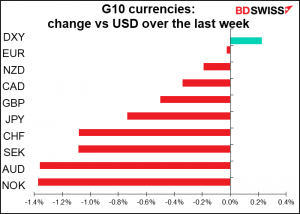 Next week being the first week of the month, as usual it’s US nonfarm payrolls week. This has always been the big indicator of the month along with the inflation data, but nowadays I think it’s even more important given the Fed’s almost total focus on employment as opposed to inflation.

For example, on Wednesday Fed Gov. Brainard repeated something we’ve heard before from Fed Chair Powell: that “the assessment of shortfalls from broad-based and inclusive maximum employment will be a critical guidepost for monetary policy.” Two important points here: one, that they aren’t concerned about unemployment being too low and therefore pushing up inflation but rather that unemployment is too high (“shortfall” is the operative word), and secondly, “broad-based and inclusive,” meaning not just the headline figure but especially the sub-categories, in particular minority employment.

The Fed has a new focus on how its policies affect minorities as result of their “Fed Listens” initiative last year, which made them more aware of how their policies impact day-to-day life in America. The regional Feds are running a series of seminars this year on “Racism and the Economy,” with the aim of “understanding the implications of structural racism in America’s economy and advancing actions to improve economic outcomes for all.” One example: during the recent boom, the gap between white and black employment ratios (the percent of the entire working-age population that’s employed) narrowed to the lowest it’s been since at least 1975. But the pandemic recession has reversed some of those gains as it disproportionately hit people in the service industry. The Fed stressed that point at some length in the semi-annual Monetary Policy Report it submitted to Congress ahead of Powell’s testimony this week, which has a three-page section on “Disparities in Job Loss during the Pandemic.”

It’s this gap that the Fed is aiming at, IMHO. 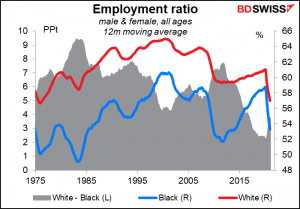 On the other hand, how many Fed seminars have we seen recently on inflation? None that I can remember. (The Bank of Italy did recently issue a paper, Is inflation targeting a strategy past its sell-by date?, that argued the current strategy of targeting inflation, which most major central banks practice, isn’t the best strategy in current conditions.)

In any case, this coming week’s figure is not expected to trigger a change in Fed policy, that’s for sure. The market is looking for a derisory increase in payrolls of 145k, which is pitiful – only 1.4% of the 10.1mn unemployed people. At that rate it would take 34 months or almost three more years to get back to the same number of unemployed persons that the US had before the pandemic began. 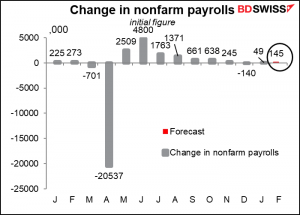 Jobless claims were still at a high level during the survey week despite the fall in the virus count. We may start to get better readings in March. 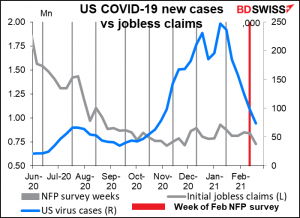 The unemployment rate is expected to rise by 10 bps to 6.4%. My guess is that this may be a result of an improvement in the participation rate as previously discouraged workers come back into the workforce, and therefore should be nothing to worry about. However given the Fed’s focus, it will be something to worry about. 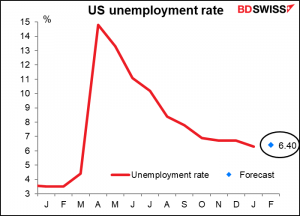 Unusually, Canada does not announce its employment data at the same time as the US this week. It will be announced the following Friday.

One of the noticeable characteristics of the recent sell-off in the bond market has been the different reactions of different central banks. Fed officials have so far been unanimously sanguine about it. St. Louis Fed President Bullard went so far as to say it’s “probably a good sign.” European Central Bank (ECB) officials though have warned of the dangers of higher bond yields, with ECB Board member Schnabel saying that “a rise in real long-term rates at the early stages of the recovery, even if reflecting improved growth prospects, may withdraw vital policy support too early and too abruptly given the still fragile state of the economy. Policy will then have to step up its level of support.”

Which side of this debate will the Reserve Bank of Australia (RBA) come down on when it meets Wednesday? I think we got the answer this week, when the RBA bought its highest-ever AUD 5bn of bonds to defend its 0.10% yield-curve control (YCC) target for the benchmark three-year bond. While it’s been able to keep that yield in a relatively tight range, the yield on the 10-year bond has soared. 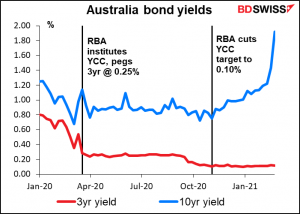 Meanwhile, the AUD-USD yield gap has moved back in favor of AUD to levels last sustained in 2017. The spread has gone from -9 bps before the RBA instituted YCC to +46 bps today. This yield pick-up is likely to bring in carry trade flows and push up AUD – exactly what the RBA does not want to see. 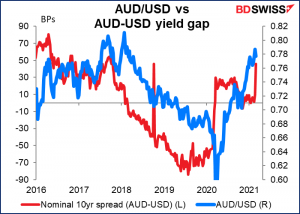 I would expect the RBA to fight back against this steeper yield curve. In the first instance, it’s likely to comment about the negative implications of higher rates for the Australian economy. It could make some operational changes to its AUD 5bn-a-week quantitative easing (QE) program, by increasing the amount it buys every week, by varying the schedule or duration of bonds that it buys, or even by increasing the overall amount committed (AUD 200bn).

I would expect any changes that it made would be negative for AUD, because that would be their intention.

The Organization of the Petroleum Exporting Countries (OPEC) and its collaborators such as Russia, known collectively as OPEC+, meet on Thursday. The group will have to make two decisions. First, they have to decide whether to restore as much as 500k barrels a day (b/d) of production in April, as scheduled to do under the plan to gradually restore production that they agreed to in December. The elephant in the room though is the second decision: what Saudi Arabia will do with regards to its unilateral 1mn b/d of production cut that it’s making voluntarily this month and next. That’s helped tremendously to square the circle: to allow other members to increase their production while continuing to run down the global oil inventory overhang.

Many people in the market assume that with prices where they are now, both restraints will be lifted. OPEC+ will restore the maximum 500k b/d production on schedule in April, while Saudi Arabia will also discontinue its voluntary 1mn b/d output cut. That would obviously mean a 1.5mn b/d increase in oil output.

Remember though that it takes time for oil to arrive at its destinations, so an increase of 1.5mn b/d in April won’t be arriving at refineries in Europe and the US until May. The question is whether demand will have increased enough by then, also what will be happening with US production. So far there’s no sign of a recovery in US oil demand, but with vaccine rollout proceeding and (one hopes) improving weather, May could be another story. I think the market would assume that the increase in supply will maintain the current market balance and prices will not be affected that much. 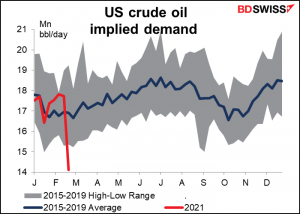 The final purchasing managers indices (PMIs) come out this coming week: manufacturing PMIs on Monday and service-sector PMIs on Wednesday.

Germany’s harmonized index of consumer prices (HICP) comes out on Monday and the EU-wide CPI on Tuesday. They’re both expected to be little changed on a year-on-year basis, giving no impetus for speculation either way. 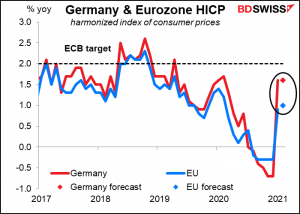 Canada (Tue) and Australia (Wed) announce their Q4 GDP figures. Australia looks for a healthy rise during the quarter, which could add to the upward pressure on interest rates there. (No forecast available for Canada.) 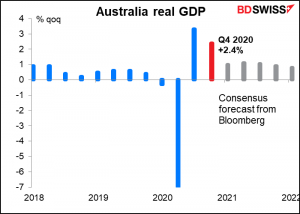