You are at:Home»MARKET PREVIEW»AUD Up as RBA Declines to Take Action against Higher Yields; EU CPI, Canada & Australia Q4 GDP

The theme in the market nowadays has been the fight between the market and the central banks over the likely path of monetary policy. Simply put, the market doesn’t believe the central banks’ pledges to keep rates steady until X, Y or Z. Traders think the recovery is proceeding faster than expected and the central bankers are going to find themselves reaching “lift-off” sooner than they have predicted. Some central banks have been pushing back on this idea however, trying to forestall market movements (higher interest rates) that offset their efforts at easing financial conditions.

Looking at the performance of the European and US markets yesterday though, it looks as if that issue has been resolved completely. European stocks were up anywhere from 1.6% (FTSE 100, CAC 40, DAX) to 2.2% (OMX Stockholm 30). And in the US, it was “danger past, bond market forgotten” as the S&P 500 jumped 2.4% and the NASDAQ lept 3.0%. The rally in the US was broad-based, with every S&P 500 sector gaining and the VIX index falling 4.6 points, thereby erasing almost all of the recent rise. 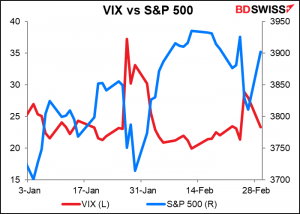 This recovery in risk appetite is somewhat surprising, as the contest between the market and the Fed continues. The market is now discounting a Fed rate hike within the next two years and two full rate hikes by the end of 2023, even though Fed Chair Powell has specifically said he doesn’t expect to achieve the conditions necessary to begin hiking rates for at least three years (= 2024).

While stock markets are gaining on both sides of the Atlantic, bond markets diverged yesterday. European government bonds rallied, with the yields of 10yr German Bunds falling -7.4bps and French OATs down 8.6bps even though the Eurozone manufacturing purchasing managers’ index was revised up to 57.9 from 57.7. Perhaps this was just Europe catching up to the big rally in US bonds on Friday? On the other hand, US Treasury yields rose further, with 10-year Treasuries up 1.2 bps and 30 years up 3.9 bps in response to higher inflation expectations (unlike last week, when the move was driven by higher real rates).

One of the reasons why the US and Europe may be diverging is the different pushback from each area’s central bankers. Yesterday we got brief comments from NY Fed President Williams and Gov. Brainard, but neither of them really touched on the issue. In contrast, French central bank governor Villeroy de Galhau added his voice to several other ECB officials (Chief Economist Lane and Executive Board member Schnabel, for example) and said that “In so much as this tightening (in financial conditions) is unwarranted, we can and must react against it, starting with an active flexibility of our PEPP purchases.” He said they could even lower their deposit rate – currently a record-low -0.50% — even further if necessary.

Note though that financial conditions are still pretty loose in the Eurozone – he’s clearly warning about further moves. 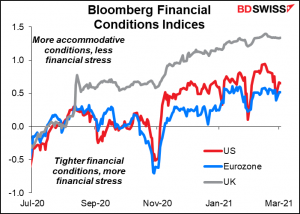 The different approach raises the stakes for today’s Fed speakers – Gov. Brainard (V) discussing the economic outlook with the Council on Foreign Relations and San Francisco Fed President Daly (V) at the Economic Club of New York, and most of all Thursday’s appearance by Fed Chair Powell at a virtual event hosted by the Wall Street Journal. If they continue to insist that higher yields are simply a vote of confidence in the recovery by the market, then US interest rates are likely to continue to move higher and the dollar may well gain on interest rate differential considerations, especially as ECB officials seem more willing to fight back against the market move.

Asia is not following through this morning however as the TOPIX is down 0.4% and Hang Seng off 1.1%, perhaps due to comments from China’s top banking and insurance regulator, Guo Shuqing, who said that he is “very worried” about risks from bubbles in global financial markets and also expressed concern about the domestic Chinese property market, which seems to be a major bubble (lots of men buying houses not to live in but just to impress potential brides, for example.)

AUD was the main gainer today after the Reserve Bank of Australia (RBA) passed up the chance to take a firm stance against higher rates. They opted for words rather than action in that while they reaffirmed their commitment to keeping rates steady, they didn’t implement any new measures to make sure that that happened. Their action was Monday’s AUD 4bn bond purchase, double the usual size, which this morning they described as bringing forward purchases “to assist with the smooth functioning of the market.” The Board noted that they are willing “to make further adjustments” if necessary, but didn’t for example declare a target for the 10-year yield. Nor did they increase the overall size of their quantitative easing (QE) program, although they did say they are “prepared to do more if that is necessary.”

Market observers were waiting to see if they would roll over their purchases of the April 2024 bond into the November 2024 bond, which would signify that their pledge to keep rates stable for three years was still ongoing, but they were ambiguous about this important point. Whereas previously they had said “the Board is not expecting to increase the cash rate for at least 3 years,” now they are saying that it doesn’t expect its conditions for raising rates to be met “until 2024 at the earliest.” That could be January 2024 or it could be December 2024.

CHF on the other hand was the main loser. Do I see the opportunity for a carry trade here? 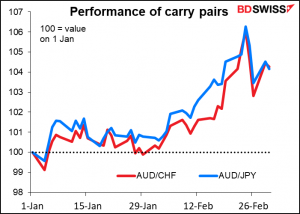 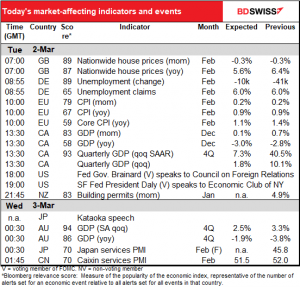 German unemployment is expected to be little changed either way from the previous month – the unemployment rate is forecast to be the same, while the number of unemployed persons is expected to fall much less than has been the case recently (-10k vs the average of around -40k a month for the last four months). In other words, the employment situation isn’t getting any worse in Germany but it’s not getting much better, either. 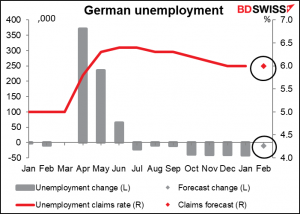 EU inflation (the harmonized index of consumer prices, or HICP) is expected to be unchanged at the headline level and to slow slightly at the core level, which is what the European Central Bank cares most about. Yesterday’s German HICP was unchanged on a yoy basis, both on the headline and core level (not shown).

The higher EU inflation rate this year could corroborate the reflation narrative and make it less likely that the European Central Bank eases policy further, but when you dig down into the numbers, it ain’t necessarily so. Aside from rising energy prices, which have nothing to do with Europe specifically, most of the recent upward pressure on prices has been due to one-off factors, including the reversal of the German VAT cut, the delay of winter sales (which throws the seasonal adjustment off), and the changing weight of goods in the annual CPI weight revision. The authorities will no doubt “look through” such factors and consider the underlying price pressures, which are not yet serious. For example, French central bank president de Galhau Monday said that while inflation is indeed rising, this increase is in part temporary, so its significance should not be overstated. 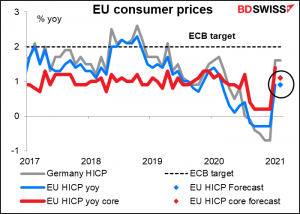 Canada’s Q4 2020 GDP is expected to be up 7.3% qoq SAAR annualized, which works out to +1.8% qoq. The worrisome thing about it though is the expected 1.0% qoq SAAR drop in Q1 this year. That forecast could change however if energy prices remain as high as they are. 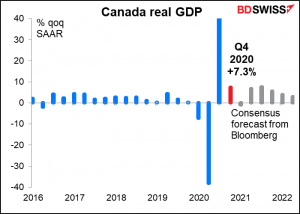 On current forecasts, Canada’s recovery is proceeding relatively well. Output is expected to recover to pre-pandemic levels by Q4 of this year, ahead of the EU and the UK. That plus the rise in commodity prices should support CAD, in my view. 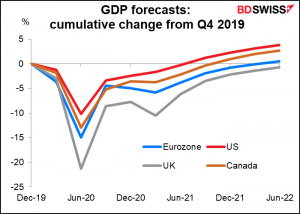 Overnight, Bank of Japan (BoJ) Policy Board member Goushi Kataoka will give a speech and hold a press conference. Normally I don’t pay any attention to what BoJ Board members say, because a) they rarely say anything more exciting than “we will do our utmost to fight deflation” and b) they always vote with Gov. Kuroda anyway. Kataoka is different because he always dissents. He’s the Neel Kashkari of the BoJ, the uber-dove who always wants to loosen policy more. We should pay attention to his speech for any hints about what might be the conclusion of the policy assessment that the BoJ has promised to deliver at the March 19th monetary policy meeting. His views on the recent rise in global bond yields, which has even thawed the permafrost of the Japanese Government Bond market somewhat, will also be worth listening to.

Australia’s GDP is forecast to have risen a healthy +2.5% qoq in Q4 last year. 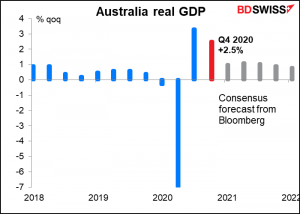 That’s quite respectable – it would put Australia back to pre-pandemic levels of output in Q2 this year, not quite as rapid a recovery as New Zealand but faster than Canada. 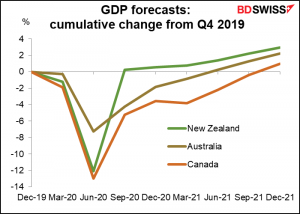 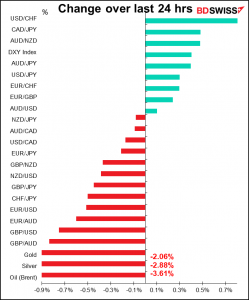