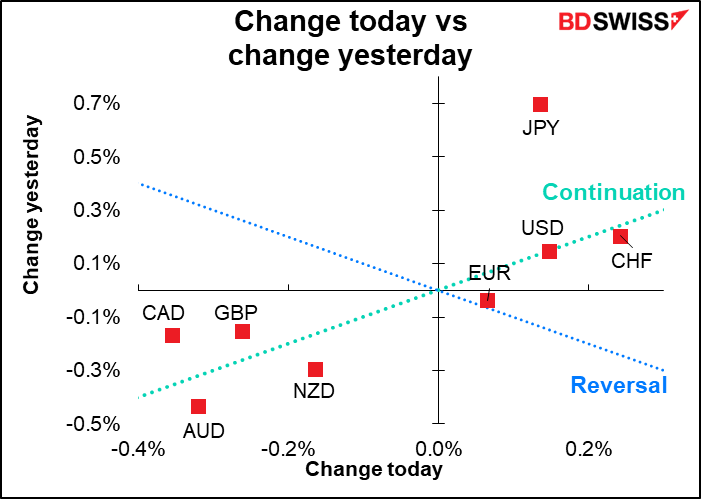 CHF and JPY were major gainers Friday as the US stock market continued to slide and “risk-off” mood dominated. This morning things are a little better in stocks, which the Tokyo market higher, China stable, and the S&P 500 futures suggesting the market will open around +0.7% higher.

It looks as if the Swiss National Bank (SNB) has given up trying to hold the line on EUR/CHF. In the most recent week there was no intervention even as EUR/CHF fell through 1.04. Today’s Swiss sight deposit data will probably tell a similar story, I suspect. What is their “line in the sand” these days, or don’t they have one? Has the SNB decided to go along with the other central banks and tighten policy, except do it via the exchange rate? 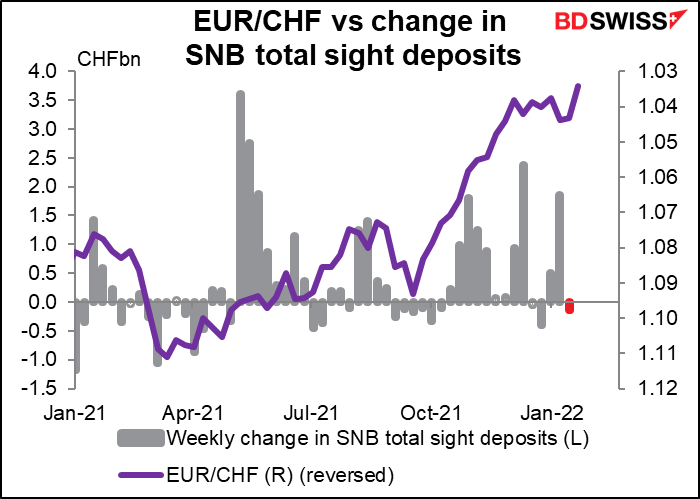 Getting back to the stock market, we really have come to the end of an era in stocks as the pandemic boom unwinds. These two stocks made the perfect “pandemic pair trade” as Pelaton depends on in-home exercise and Planet Fitness is a gym. 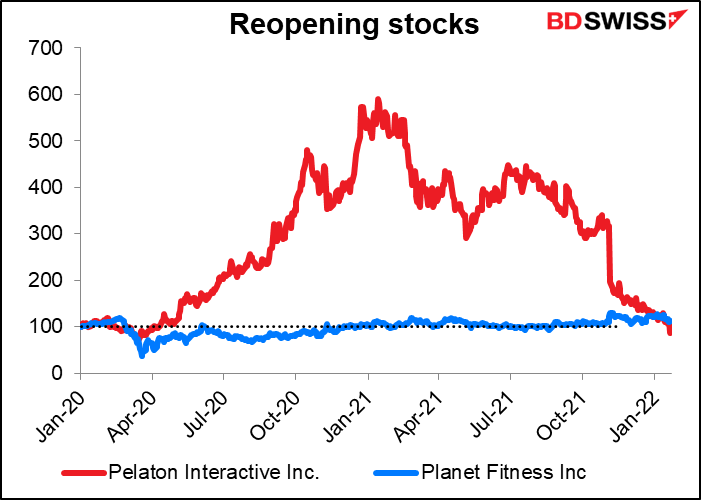 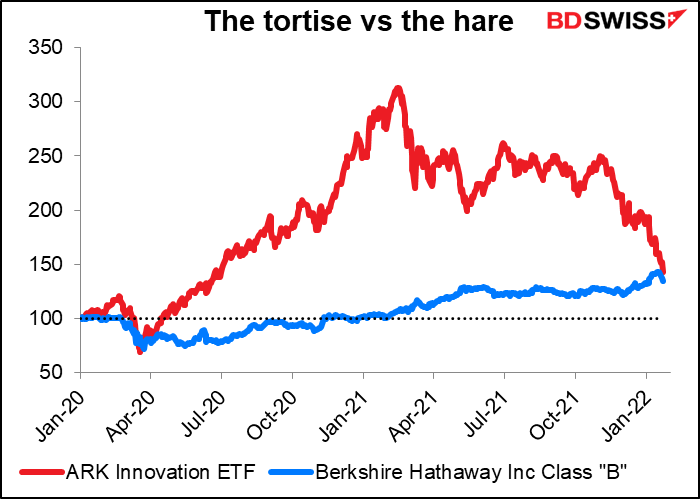 Despite the decline in stocks Friday, oil rose fairly steadily during the day and jumped higher at the start of business this week. The headlines read “Oil opens week with jump on outlook for stronger global demand,” based on US virus guru Dr. Fauci expressing confidence Sunday that the surge in Omicron will soon peak. I wonder if the increasing hostilities in the Middle East (UAE vs Yemen) and the problems facing the Iran talks might be factors as well.

It was noticeable that CAD was the worst-performing currency despite the rally in oil. The two went in totally different directions (actually, USD/CAD followed oil higher, which is the same direction, but that means CAD weakened).  That may have been because of the general “risk-off” tone in the market. In that case, I’d expect some mean reversion today and for CAD to recover (USD/CAD to fall).

Speculators’ love affair with the dollar is over. Specs sold dollars in the latest week. Their long EUR position increased notably, almost matched (in USD value) te the virtual elimination of GBP shorts. Specs also flipped from short CAD to long CAD. Ditto for MXN. Meanwhile, they trimmed their AUD and JPY shorts. The only major currency to go against the trend was CHF. 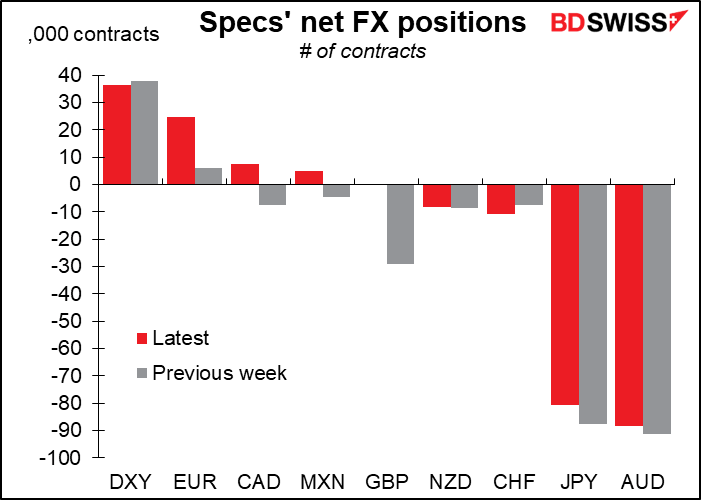 Hedge funds were not so negative on the dollar, however. They did cut their EUR shorts a bit and flipped from short to long GBP, but added to their AUD, MXN, CHF and NZD shorts. 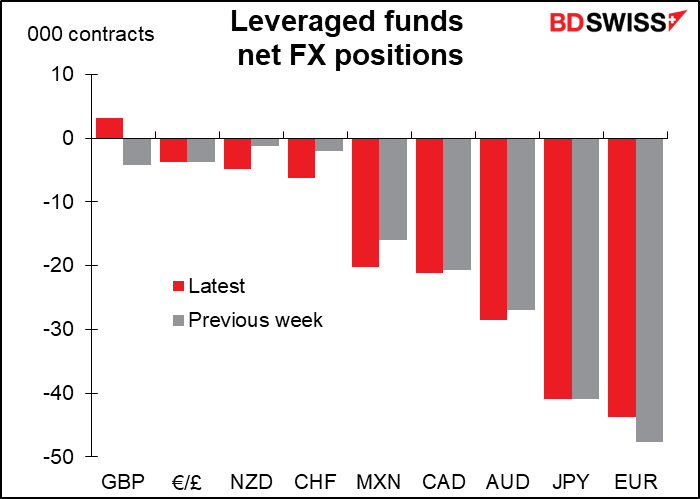 Retail investors were also less negative on the dollar; they cut most of their short currency positions while adding to long CAD. But they trimmed their long EUR a bit. 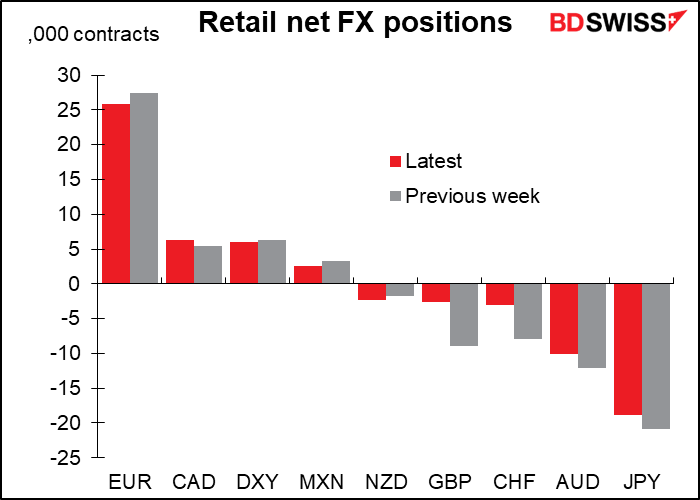 As for precious metals, specs trimmed their long gold position but added to their long silver. 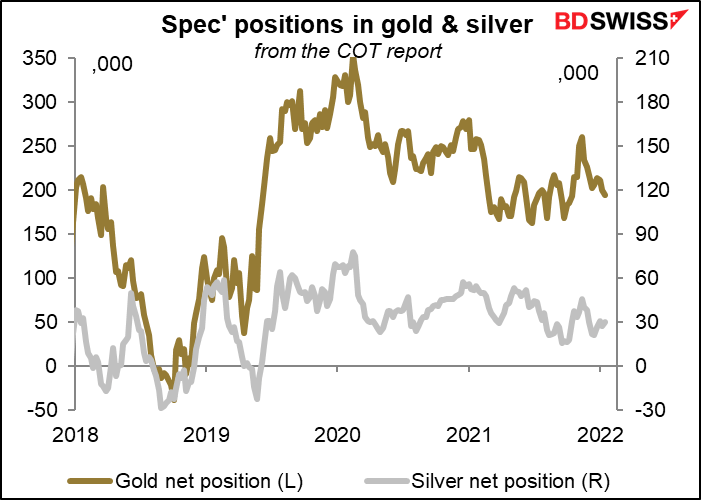 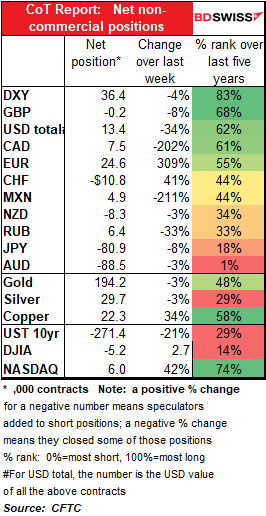 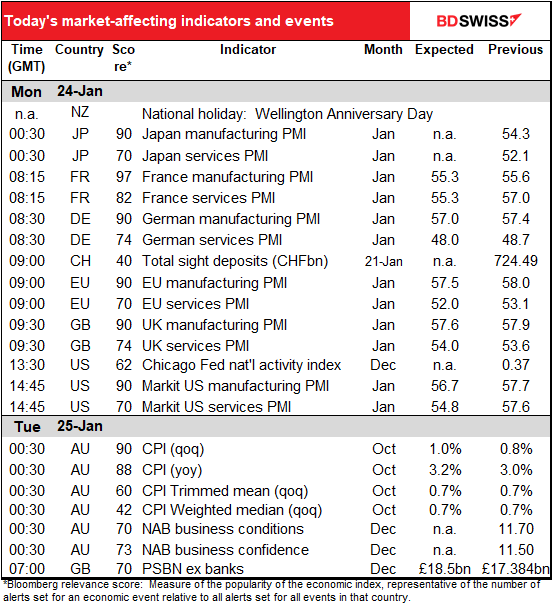 It’s maybe not immediately crucial for the market, but today is the first round of elections for the President of Italy. The President is elected by the Italian Parliament and the regional representatives. Because of the odd voting method it usually takes several days to decide the winner. (If you’re curious about who these folks are and the details on how the election is carried out, please see the Wikipedia article.)

The full details about the election, what’s at stake, and its significance for the FX market are in our Market Insight piece, Draghi for President? Italy goes to the polls – implications for EUR. Here are the main points:

Ordinarily the election of a new President Italy wouldn’t be of much concern to the markets, because the position doesn’t exercise any direct political power under normal circumstances.This time however the extraordinary slate of 26 candidates includes one name well-known to the financial community:  the redoubtable Mario Draghi, savior of the Eurozone and current Prime Minister of Italy.

As the Eurozone’s third-largest economy and the second-largest government bond market (with the second-highest debt/GDP ratio among the major debt issuers), Italy and its economy are of crucial importance to the outlook for the euro. Remember what happened a few years ago when it looked like Greece might not be able to pay its debts? Italy’s outstanding debt is over 7x as much. Anything that endangers Italy’s economy endangers the euro. 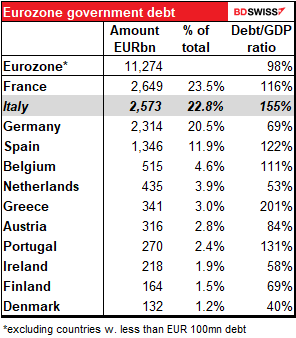 As for the data, the main feature today is the preliminary purchasing managers’ indices (PMIs) from the major industrial countries. They’ll give the latest update on the global economy in the wake of the Omnicron wave. No surprise then that economists are expecting mostly bad news; only the UK service-sector PMI is expected to be up, and that’s just +0.4  point. The service sector on the Continent is expected to take a hit, not surprising as both Germany and France tightened down their COVID-19 restrictions in early December. France eased them a bit a week or so ago, Germany hasn’t budged. US manufacturing is expected to be down sharply, perhaps following the disappointing Empire State manufacturing survey (which plunge to -0.7 from 31.9). 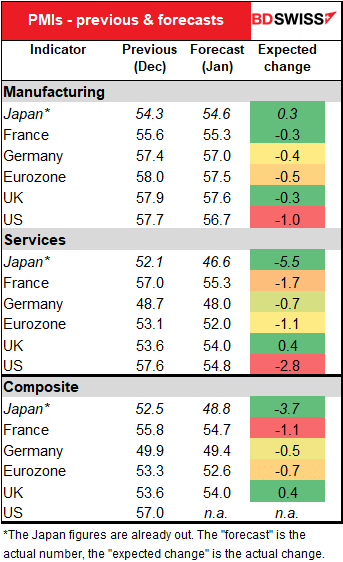 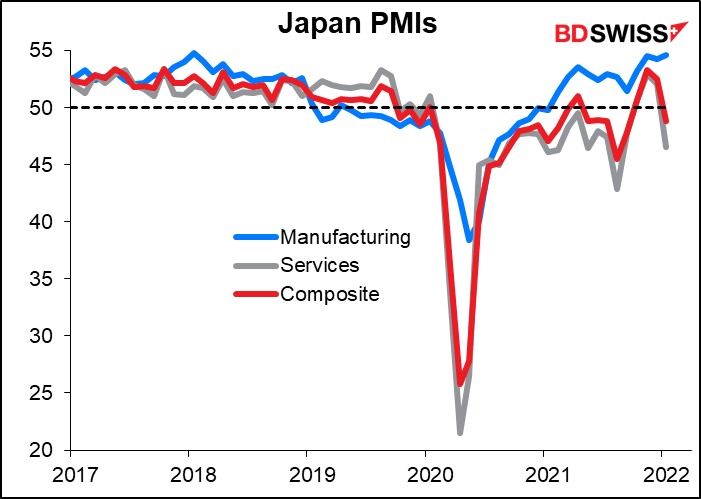 Will the (expected) slowdown in economic activity reduce pressure on supply chains and help to bring down inflation later? Maybe. We’ll have to wait until the final PMIs come out on Feb. 1st and 3rd  to see the details.

And that’s about it for the schedule today.

Overnight Australia releases its consumer price index (CPI). Headline CPI is expected to be up slightly to 3.2%, still outside the Reserve Bank of Australia (RBA)s 2%-3% target rand. The two core measures meanwhile are forecast to be squarely within the range (both at 2.3% yoy, which is why you can only see one dot in the graph). (The inflation target in Australia is defined by headline inflation; the core measures are used “in assessing current inflation pressures and the outlook for CPI inflation.”)

Inflation above target, unemployment below the level it was before the pandemic began, and employment higher; how long will the RBA be able to argue that it’s “likely to take some time” before inflation is “sustainably within the 2 to 3 per cent target range”? AUD+ 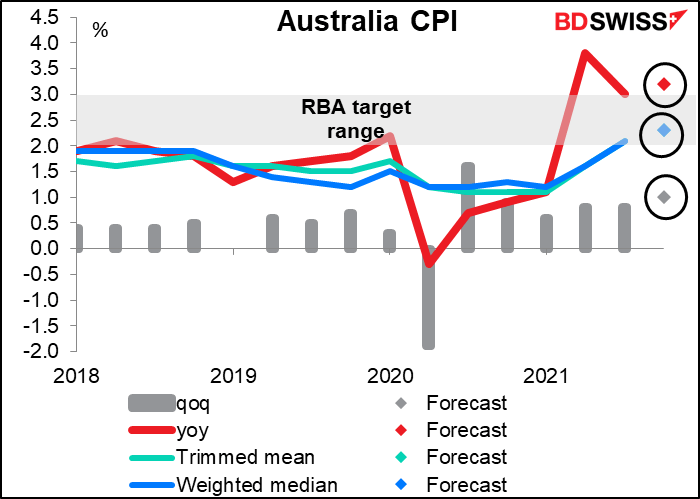 We also get the National Australia Bank (NAB) business sentiment indices. My sources in Sydney tell me that this is what people there watch rather than the Markit PMIs for the country. No forecast available. 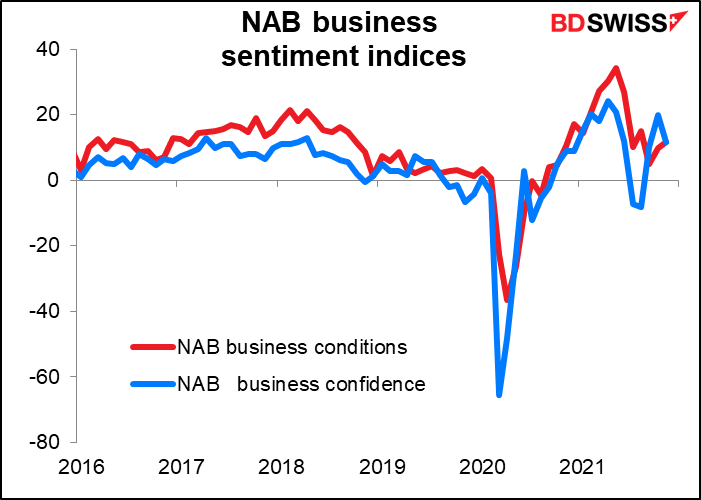 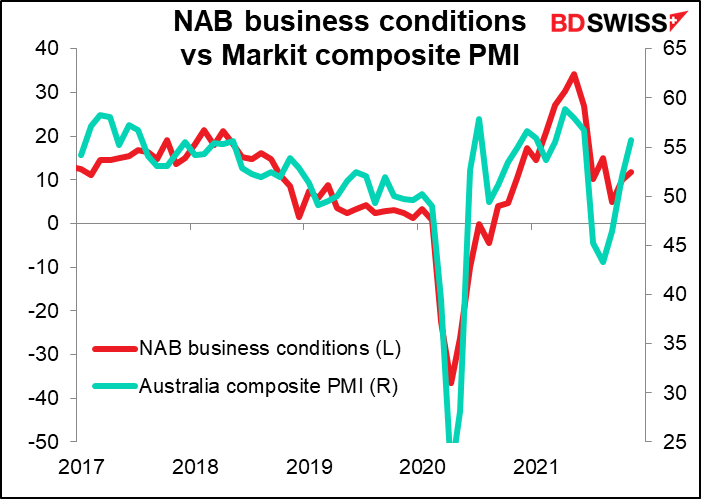 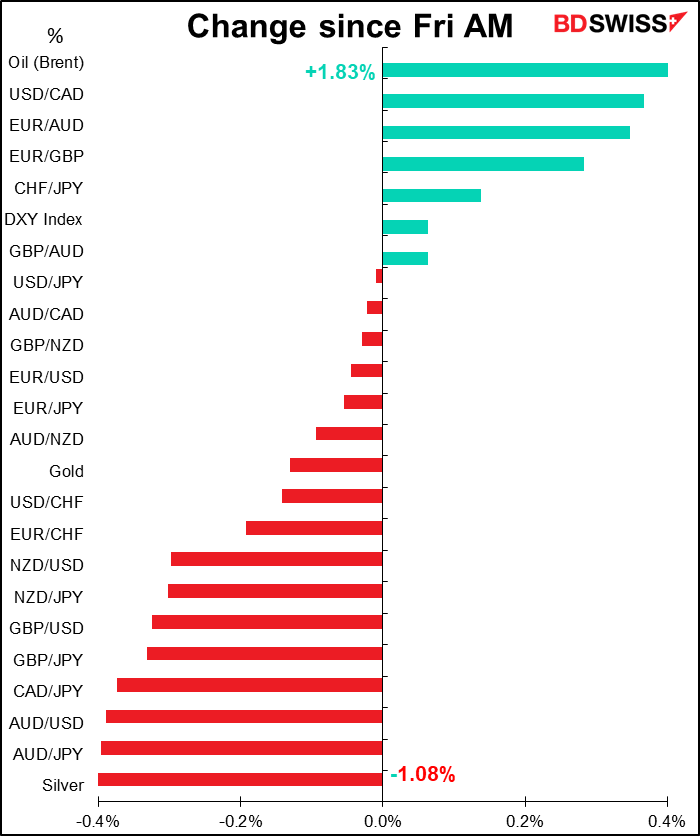