You are at:Home»Market Insights»Draghi for President? Italy goes to the polls – implications for EUR

It’s maybe not immediately crucial for the market, but today is the first round of elections for the President of Italy. The President is elected by the Italian Parliament and the regional representatives. (If you’re curious about who these folks are and the details on how the election is carried out, please see the Wikipedia article.)

If no one achieves a two-thirds majority today, another round of voting will be held tomorrow and the next day. If after the third round no one has still won a two-thirds majority, then the threshold falls to an absolute majority. That suggests there’s not likely to be a decision until Thursday or later. On average it’s taken nine votes over six days to elect a President. Only twice has a president been elected on the first round, whereas five have required 15 or more rounds of voting.

Ordinarily the election of a new President Italy wouldn’t be of much concern to the markets, because the position doesn’t exercise any direct political power under normal circumstances The President appoints the Prime Minister (PM), but the PM has to survive a confidence vote so this appointment has to reflect the will of Parliament. The President can reject a ministerial nomination by the PM if he or she believes the general interests protected by the Constitution are put at risk by the appointment. This happened in 2018 when the outgoing President refused to appoint a finance minister who favored leaving the eurozone.

This time however the extraordinary slate of 26 candidates includes one name well-known to the financial community:  the redoubtable Mario Draghi, savior of the Eurozone and current Prime Minister of Italy.

“Super Mario”  was appointed PM in Feb. 2021, when Italy was facing several emergencies: economic measures were needed to deal with the economic crisis caused by the pandemic, the vaccination campaign had just started, and the National Recovery and Resilience Plan (NRRP) needed to be approved and endorsed by Brussels. With his stellar Europe-wide reputation, Draghi managed to bring together parties that are normally opposed to each other and form a national unity government that dealt successfully with all these crises.

As the Eurozone’s third-largest economy and the second-largest government bond market (with the second-highest debt/GDP ratio among the major debt issuers), Italy and its economy are of crucial importance to the outlook for the euro. Remember what happened a few years ago when it looked like Greece might not be able to pay its debts? Italy’s outstanding debt is over 7x as much. Anything that endangers Italy’s economy endangers the euro. 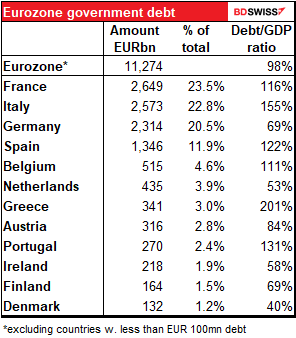 One good point: the loathsome and despicable Silvio Berlusconi withdrew his candidacy on Saturday, saving Italy from possible disaster. Will wonders never cease.