You are at:Home»MARKET PREVIEW»“Risk-on” as Virus Vaccine Comes one Step Closer; Bank of Canada, China GDP 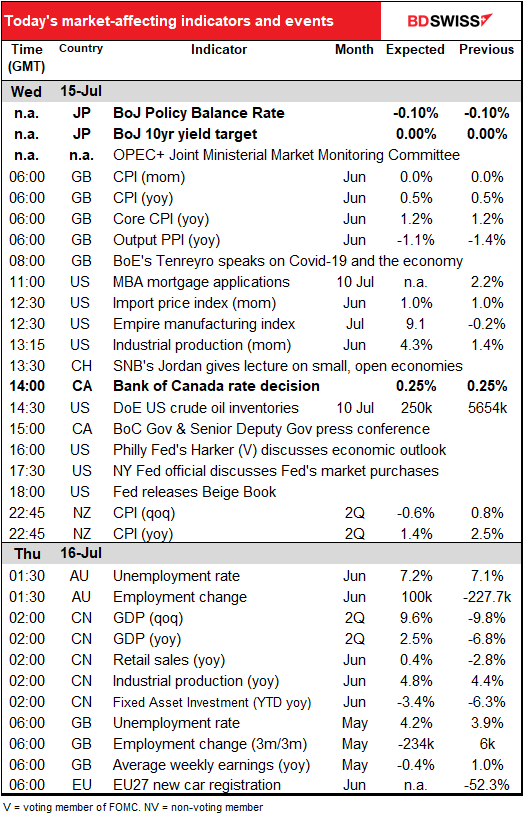 A big “risk-on” day in New York, with the DJIA in particular showing a 2.1% jump (S&P 500 a more modest +1.3% rise). This morning most Asian stock markets are higher, with the exception of the Chinese markets. An upside surprise in the latest NFIB Small Business Optimism survey for June (100.6 vs 97.8 expected, 94.4 previous), a smaller increase in virus cases in Florida and particularly news from pharmaceutical company Moderna that it will begin the Phase 3 trial of its virus vaccine on July 27th all helped the risk background to improve. The S&P 500 is indicated up 0.8% in overnight trading.

FX market reactions were typical “risk-on” – AUD up, JPY and USD down. I was surprised at CAD’s small gains, what with oil prices up and against a weaker US dollar – perhaps there are concerns ahead of today’s Bank of Canada meeting?

EUR remained well underpinned despite discouraging news about this week’s summit. EUR/USD broke above the 1.14 level temporarily, while EUR/GBP moved above 0.91. This is despite comments from Dutch PM Rutte – one of the so-called “Frugal Four” — that he is not hopeful about reaching an agreement for the EU recovery fund at the summit and German Chancellor Merkel noting again that the EU states have differing views on the recovery.

Big news out of the US: the Trump regime has orders hospitals to bypass the Centers for Disease Control and Prevention (CDCP) and send all COVID-19 patient information, such as the number of patients and the number of available beds, to a central database run by the government’s Department of Health and Human Services (HSS). Officials claim the change will streamline data gathering, but others note that a) the HSS is run by a Trump appointee, Alex Azar, who is a former pharmaceutical company official, and b) the HSS database that will receive the information is not open to the public, unlike the CDCP database. So if a reporter wants to check the information…tough luck. If you can’t stop the testing – Trump’s preferred method – this is another way to get the number of virus cases under control.

I’ve been posting occasional high-frequency data, such as the Apple mobility data or OpenTable figures on the number of people eating in restaurants. Bloomberg Economics has combined a number of these and adjusted them with some mathematical wizardry to provide a series of comparable indices of economic activity. Assuming I can get updates, I’ll be posting them occasionally.

What they show is that activity appears to have peaked peak in the countries covered except the Eurozone. Since the market is looking for recovery nowadays, that would tend to ratify the recent EUR strength.

(Note: the Eurozone figure is a population-weighted average of Germany, France, Italy and Spain. Weighting by GDP instead makes no difference.) 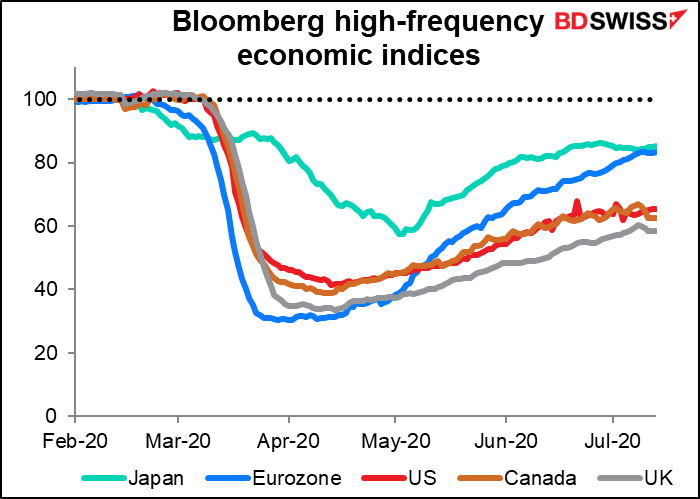 The Bank of Canada (BoC) has been the most aggressive central bank in terms of expanding its balance sheet relative to its size at the beginning of the year. There’s no comparison with the other central banks. 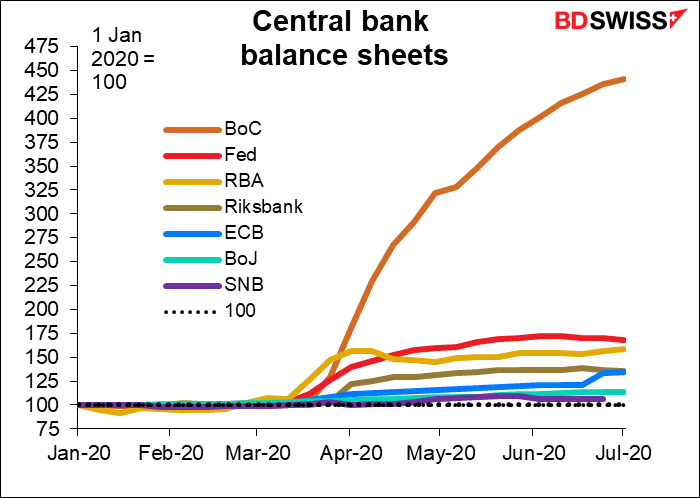 The expansion has tapered off recently however, indicating that they believe they’ve achieved much of their goals. Indeed this was the message at their June meeting, when they decided to reduce the frequency of some of their emergency market operations. “As market function improves and containment restrictions ease, the Bank’s focus will shift to supporting the resumption of growth in output and employment,” they said at their last meeting. They could shift their programs further in this direction.

In the absence of any new policy initiatives, the main point of interest will be the updated forecasts in the July Monetary Policy Report. We should learn how the Governing Council views the recovery developing. Do they still expect growth to resume in Q3? What do they expect for the trajectory of the recovery?

The other important meeting of the day is the end of the two-day OPEC Joint Ministerial Monitoring Committee. This is a technical panel that reviews OPEC output and makes recommendations to the full organization. The group has imposed quotas that cut its overall output by 9.6mn barrels a day (b/d) for May, June and July. These cutbacks are scheduled to expire at the end of July and output allowed to rise by 1.9mn b/d, or 7.7mn b/d below the benchmark period. The Committee will discuss whether to keep the existing cutbacks or let them taper off on schedule. Press reports say the committee outlined plans to relax the production cuts for most members while extracting compensatory cuts from members that haven’t been complying. The cheating countries would have to cut production by 842k barrels a day during August and September. That would mean production would rise by around 1.1mn b/d from current levels, not 1.9mn. In effect they are tapering the tapering. Given market expectations of a larger cut, I think an agreement along those lines could be bullish for oil prices and therefore for CAD.

The problem is that global oil supply & demand are already finely balanced – if not tipped into oversupply – and with fears about global growth resurfacing as virus counts rise worldwide, maybe now isn’t the best time to increase supply.

On the one hand, it looks like driving has gotten back to normal – and then some – in the major industrial countries. (Although I noted that Bloomberg excludes the Apple mobility data from its composite indicators for each country as their economists believe it overestimates the recovery in comparison with other indicators.) 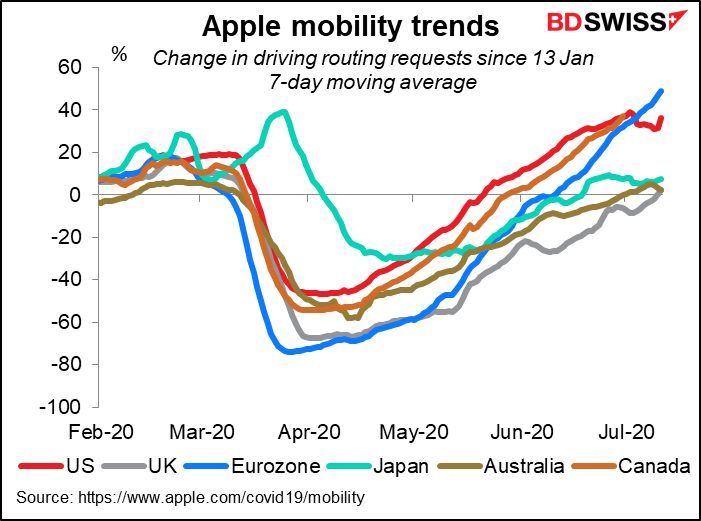 On the other hand, demand hasn’t yet, at least not in the US. 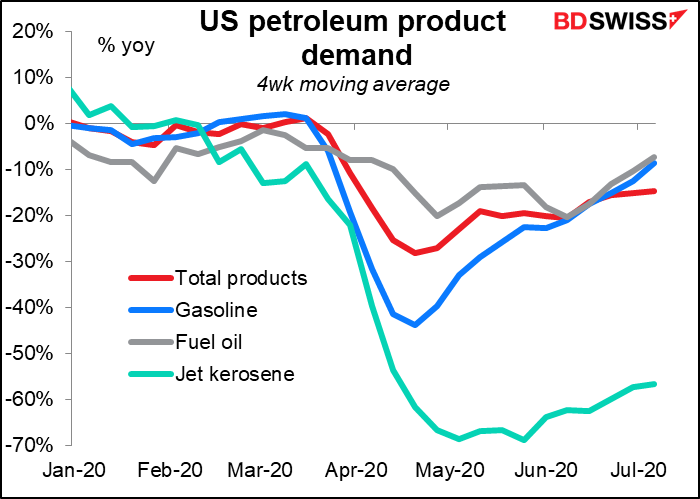 US oil inventories are about 16% higher than the usual level for this time of year: 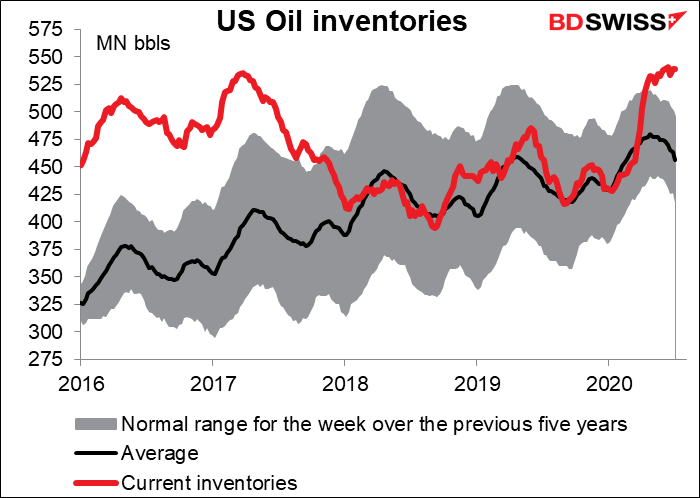 While the amount of oil being held in floating storage worldwide has trebled this year. 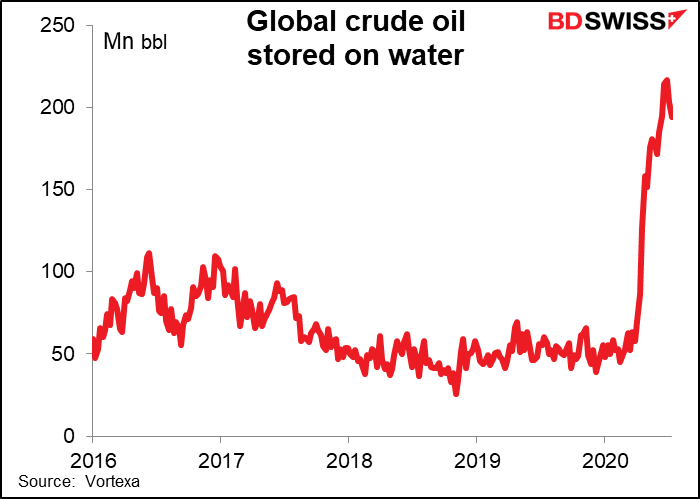 Aside from that, there’s a host of other indicators out today.

We already dealt with UK consumer prices in yesterday’s daily.

The Empire State manufacturing survey, together with tomorrow’s Philadelphia Fed survey, will give us the first early indications of economic activity in July. Today’s Empire State index is expected to rise further into positive territory, indicating expansion, while tomorrow’s Philly Fed index, which jumped an astonishing 70.6 points last month, is expected to fall back a bit – no surprise there. All in all this would be a good indication that the US economy is still recovering. 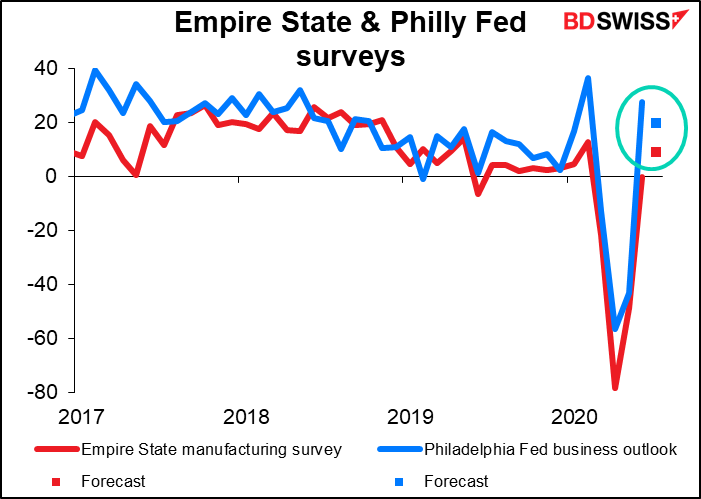 US industrial production is yet another statistic where the level of the index tells a better story than the percent change. It’s expected to be above the level of April and May but nowhere near back even to March’s level, and still 11.6% below the average for January and February. 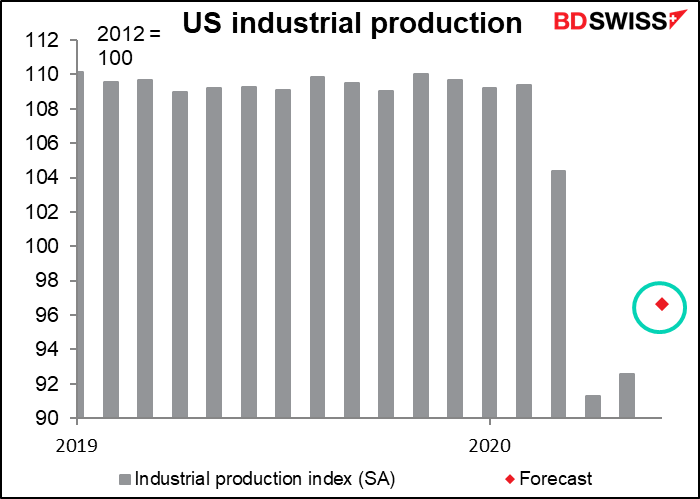 It’s back to the level of nine years ago or so. 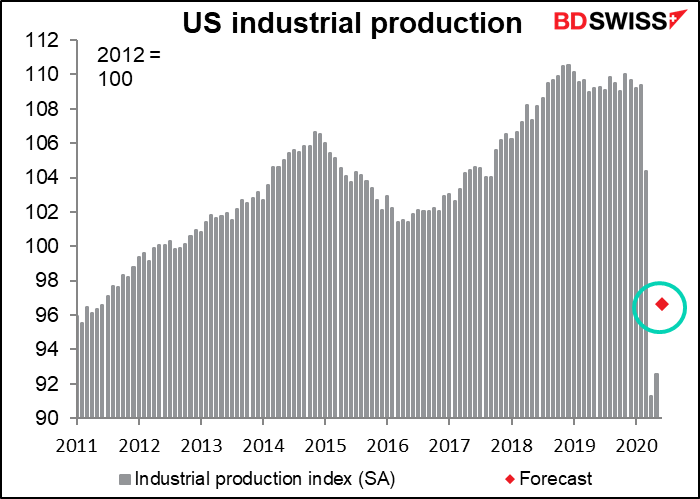 US oil inventories are up 109mn barrels or 25% so far this year. The market is looking for a small increase in this week’s figures. But yesterday’s data from the American Petroleum Institute (API) showed a huge 8.3mn barrel drawdown, which is the largest this year according to both the API and the Dept of Energy data. 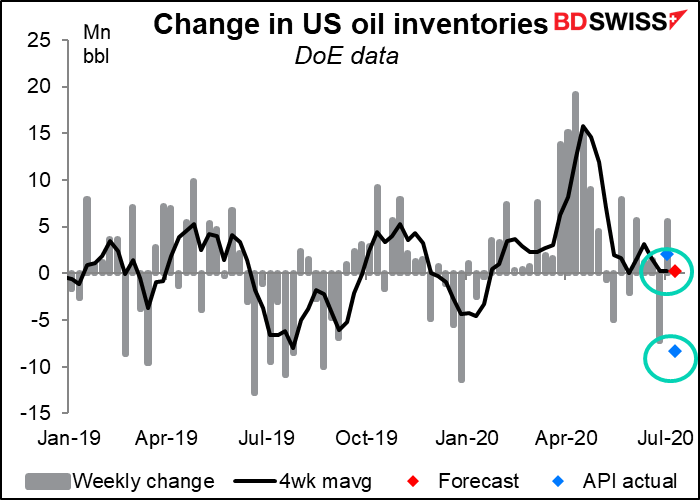 The Fed releases the “Summary of Commentary on Current Economic Conditions,” aka The Beige Book (which actually looks green to me, at least the version you can buy in the store) as always two weeks before the next FOMC meeting. It’s significant for the market because the first paragraph of the statement following each FOMC meeting tends to mirror the tone of the Beige Book’s characterization of the economy. The book doesn’t have any number attached to it that quantifies its contents, but many research firms do calculate a “Beige Book index” by counting how many times various words appear, such as “uncertain.” In any case, the book is largely anecdotal so you’ll just have to watch the headlines as they come out. It will be especially important this time because of the difficulty of getting accurate data on the fast-moving situation in the US. The detailed assessment from each of the 12 regional Feds will provide valuable insight into the “V” vs “W” debate now raging.

Overnight we have some important data from the antipodes.

The New Zealand consumer price index (CPI) is expected to fall from the top half of the Reserve Bank of New Zealand (RBNZ) target range to the bottom half. That’s because prices in Q1 were inflated by various one-off factors, such as the increase in tobacco costs. Since then, petrol prices have fallen and prices in general are soft everywhere, leading to generally weak inflation prints in most countries. I don’t pay much attention now to CPI figures from most countries, because in most cases the central bank is going flat out anyway. The RBNZ however is an outlier: they have threatened to cut rates further into negative territory if necessary. So they can still react to the data. That makes the data significant. This would not be enough to get them to cut further, but it’s a first step toward that. 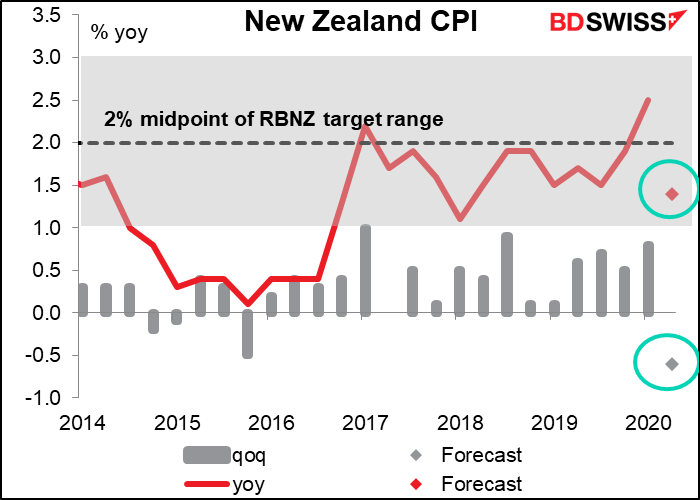 Then we get Australian employment. After two consecutive months of job losses totaling 835k, jobs are expected to bounce back by 102k. Nonetheless the unemployment rate is forecast to tic up a bit as the participation rate rises. That’s a good sign insofar as it indicates more confidence about the job market. Ordinarily I’d say this would be AUD-positive as the Reserve Bank of Australia has a “triple mandate” that includes “the maintenance of full employment in Australia.” However nothing will get them to raise rates at any time soon. But perhaps as a sign of an improving economy it will prove AUD-positive. 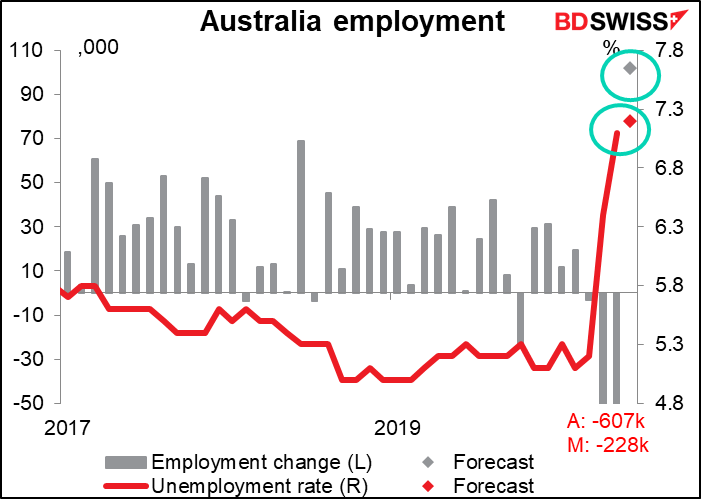 FYI we recently had the Australian Bureau of Statistics’ new short-term measure of payrolls since the 100th virus case was found in the country. Data for the week of 27 June showed jobs down 5.7% since the beginning, an improvement from -6.4% two weeks earlier. 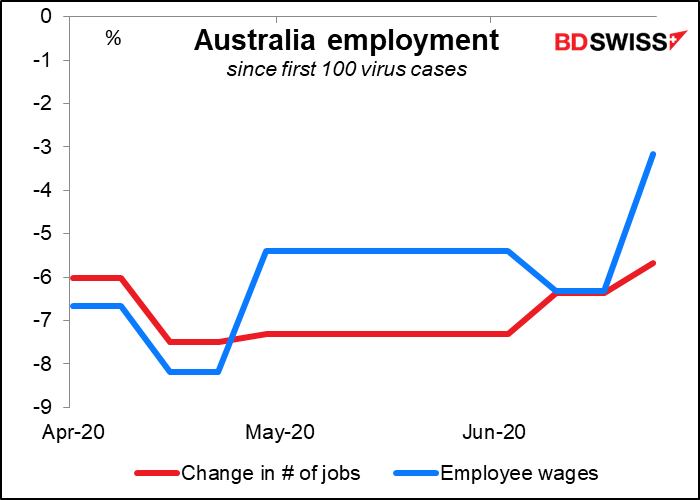 Subsequently we get several figures from China, including the key China Q2 GDP data. The country is expected to have moved back into growth in Q2. That would be good news for two reasons: one, because it suggests that even a severe lockdown only causes a temporary loss of output, and secondly, because China is an engine of growth for the rest of the world – if China is doing well, then Australia and New Zealand, among others, are likely to be doing well too. 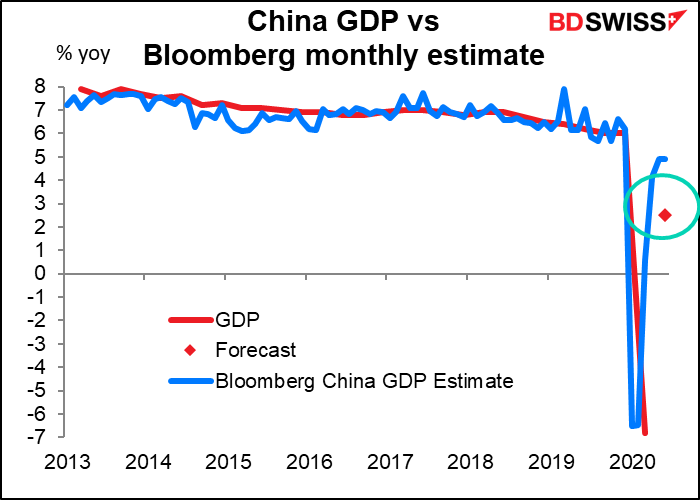 I think even better proof of China’s recovery will be the retail sales and industrial production figures. Retail sales are expected to be up on a yoy basis, even if only slightly. That’s a pretty rapid recovery, at least compared to what’s going on in the West. It would tend to be bullish for Chinese stocks and the general “risk-on” atmosphere, I suspect. 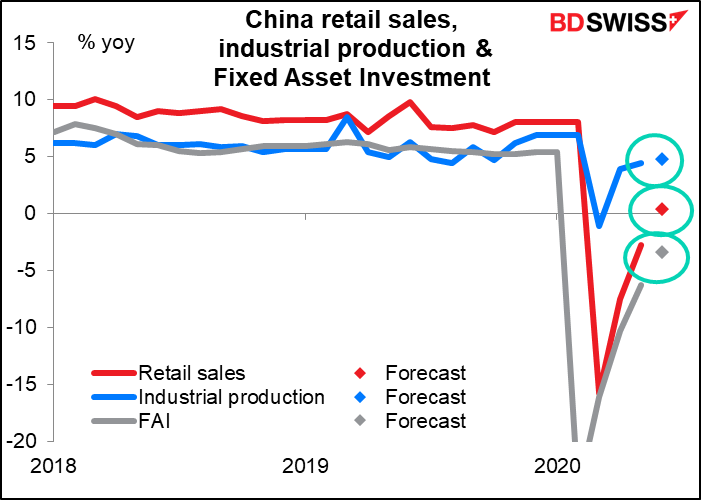 Finally, early in the European day we get the UK employment data. The fact that Britain uses a rolling average for its headline data makes it less sensitive to turning points and so less use at this point. It’s also a month behind (today’s figures are for May). That’s why Britain is expected to see the first decline in employment since the figure started, which is probably unrealistic. The decline is not expected to be as steep as it was back in 2008/09. The unemployment rate is forecast to rise only a little. 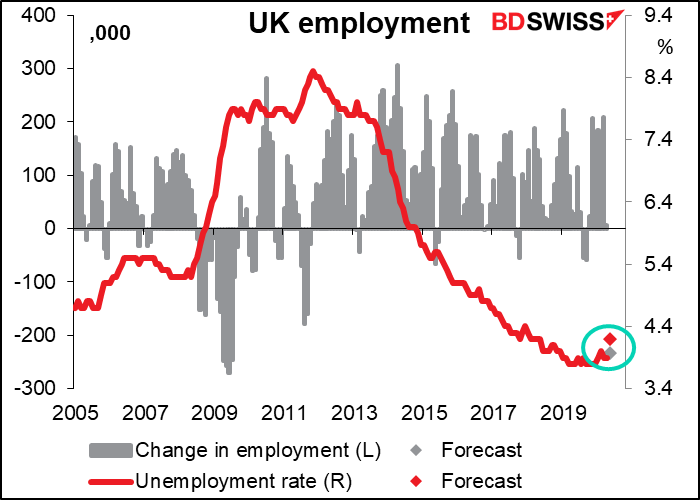 That’s why the market is focusing once again on the claimant count rate and the change in the number of claimants. These series are analogous to the US jobless claims and are for June. No forecast is available however. 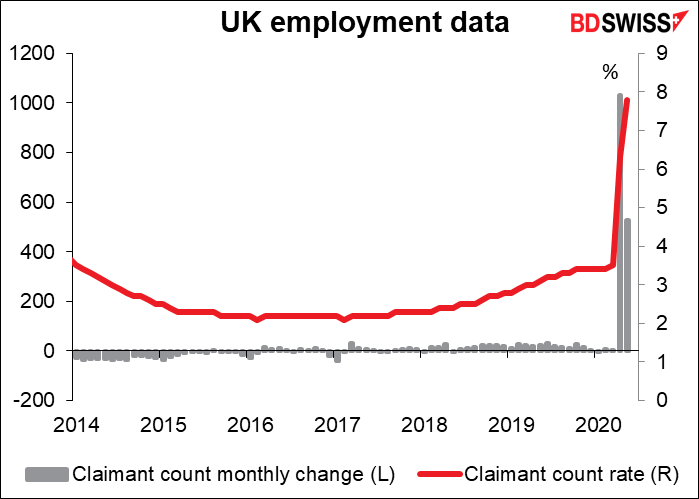 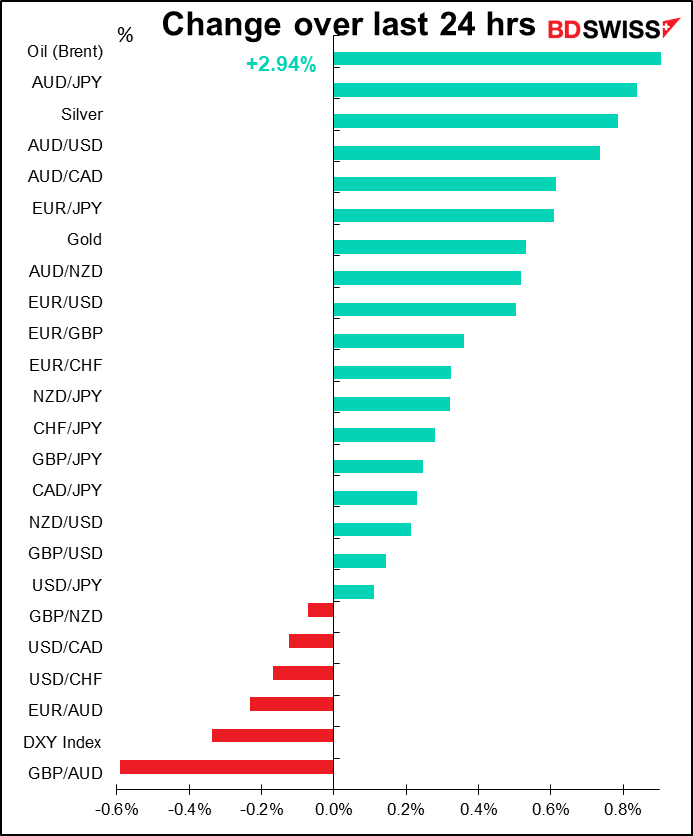