You are at:Home»MARKET PREVIEW»USD & CHF Down on “Risk-on”, CAD up on optimistic BoC; ECB Meeting, Jobless Claims 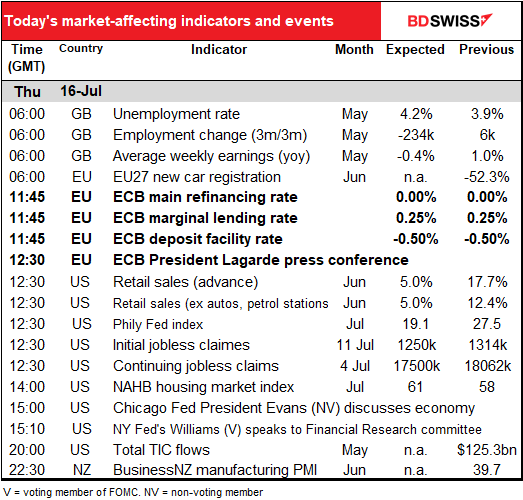 More optimism on a virus vaccine kept the “risk-on” mood going yesterday. After the encouraging news Tuesday about Moderna’s vaccine trials, Britian’s ITV channel Wednesday reported that “there will be positive news soon (perhaps tomorrow) on initial trials of the Oxford Covid-19 vaccine that is backed by AstraZeneca.” Then later in the day, US virus guru Dr. Anthony Fauci predicted that the US will meet its goal of a vaccine by the end of the year.

So everyone ignored the current situation – the US recorded its second-highest-ever one-day total of cases as 41 out of the 50 states are seeing an increase) – and looked forward to the brave new world of widespread immunity. Next question: how many Americans will actually take the vaccine once it’s available and how many will refuse on the grounds that Bill Gates is plotting to use it to implant microchips in everyone? Polls have found as few as 50% of people in the US are committed to receiving a vaccine, with another quarter wavering, according to Science Magazine. But that’s a question for later down the line.

Aiding the risk-on sentiment was some good economic news: first China’s GDP beat estimates (+11.5% qoq vs +9.6% estimate) and then both the US Empire State manufacturing index and US industrial production beat expectations. The Empire State index in particular was spectacular at 17.2, the highest level since November 2018 (although remember that things are improving a lot from their worst in the New York region, while things are getting noticeably worse in many other parts of the country).

The selling of safe-haven currencies was concentrated in CHF rather than JPY as algorithmic trading firms sold CHF. In fact if you look at the graph at the bottom, CHF/JPY showed the largest percentage decline of any of the many currency pairs that I follow. USD/JPY fell below 107.00, but there aren’t any major factors moving the pair from the Japan side – it continues to be dominated by what happens with the dollar, in this case USD weakness.

EUR/USD managed to stay above 1.14 yesterday on optimism about the EU summit, which was boosted by comments from the office of the French presidency saying that a consensus on the rescue fund is possible at the end of this week – I’ll believe it when I see it. But the pair has dipped its toes below that line this morning. EUR was also boosted yesterday by corporate demand to buy EUR/GBP, perhaps thanks to Bank of England Monetary Policy Committee member Tenreyro’s expectation that the recovery would show an “interrupted or incomplete ‘V-shaped’ trajectory.” She also indicated that negative rates were a “live issue” in the UK, in contrast to some other MPC members who’ve suggested that the idea was on the back burner at best.

Oil gained on the OPEC+ agreement to cut back the cutbacks by less than expected (if that makes sense – translation, they’re planning to increase production but not by as much as they had planned). Also the US Dept of Energy confirmed the American Petroleum Institute’s estimate of a large drawdown in oil inventories in the latest week (-7.5mn barrels, the biggest fall of the year according to the DoE data). I think the rally in oil is likely to peak soon though. It’s gone very far with little indication of an increase in demand, and the US looks likely to roll over soon.

CAD was the best-performing currency, again with algorithmic trading firms as big buyers. Part was due to the oil price gains, part from the more upbeat tone from the Bank of Canada, which said the decline in activity was “considerably less severe than the worst scenarios” that it had envisioned back in April. It expects that “roughly 40% of the collapse in the first half of the year is made up in the third quarter,” after which the recovery will slow. Canadian GDP won’t reach pre-virus levels again until 2022, it forecast.

Personally, I thought the Bank of Canada’s decisions were notably CAD-negative, because they are now saying in effect that policy will be totally relaxed indefinitely. The thing is, this may not be so different from what every other central bank is saying, so on a relative basis perhaps it isn’t as devastating to the currency as it would be under normal conditions. The BoC said it would continue with its quantitative easing (QE) program, buying at least CAD 5bn of government bonds a week, “until the recovery is well underway,” whatever that means. They also pledged to keep their policy rate at 0.25% “until economic slack is absorbed so that the 2% inflation target is sustainably achieved.” Good luck with that! Japan made basically the same pledge, which is why Japan’s policy rate has been around zero since 1996, I think it is. Maybe I’m being too pessimistic.

A big day today, with the ECB meeting, US retail sales, and the weekly US jobless claims.

As usual, I discussed the UK employment data yesterday. Besides, I’m sure it’s out by the time you’re reading this.

No forecasts for EU 27 auto registrations, which were down over 50% yoy last month.A handy indicator of consumer sentiment. 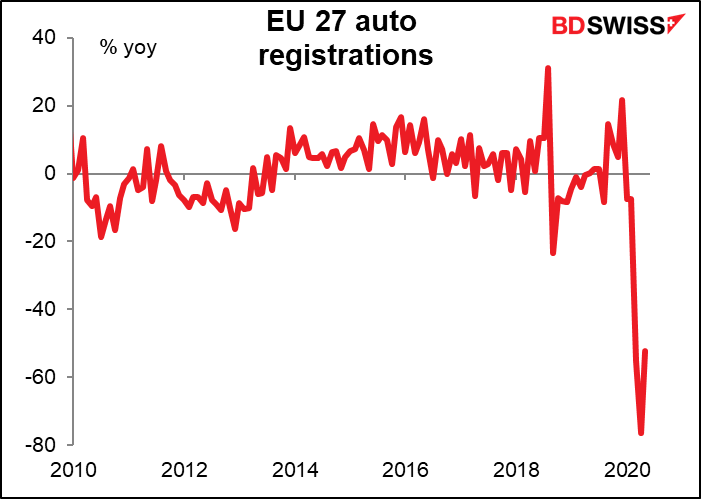 Then comes the main feature of the day, the European Central Bank (ECB) Governing Council meeting. I expect it will be much like the Bank of Japan and Bank of Canada meetings earlier this week: no change in policy and a reaffirmation of willingness to act if necessary.

At the last meeting in June, the ECB expanded their Pandemic Emergency Purchase Programme (PEPP) and extended it into next year as well as implementing the large-scale Targeted Long-Term Refinancing Operation (TLTRO) auction. They also recently satisfied the German Constitutional Court’s discomfort with their Public Sector Purchase Programme (PSPP). That’s enough action for the time being. Nor will there be any forecast update to spur any changes in policy this time. Finally, the ball is in the governments’ court as they debate what to do about the European Commission’s proposed €750bn ‘Next Generation EU’ plan, which will be up for discussion at the EU Summit the next day.

As a result, I would expect the Governing Council to take stock of the latest economic developments and reiterate its willingness to do more if necessary.

The only point of contention I can see is that some of the more hawkish Governing Council members have said that if the recovery proves stronger than expected, the ECB might decide not to use all the resources in the PEPP. However, with the EU yet to decide on the recovery fund and virus cases starting to inch up as countries start to emerge from lockdown, I think the recovery is far from assured yet. That debate can wait for a few more meetings.

If there are no new programs to debate and decide at this meeting, the Council could get back to the business of their strategy review, a goal that was put on hold because of the virus.

US retail sales are one of the key indicators of the returning health of the economy. Both the “advance” measure and the measure excluding autos and gasoline are expected to be above March’s level but not yet back to the pre-COVID-19 level. The recovery could help to spur another round of “risk-on” sentiment, which as we know could be bearish for the dollar. 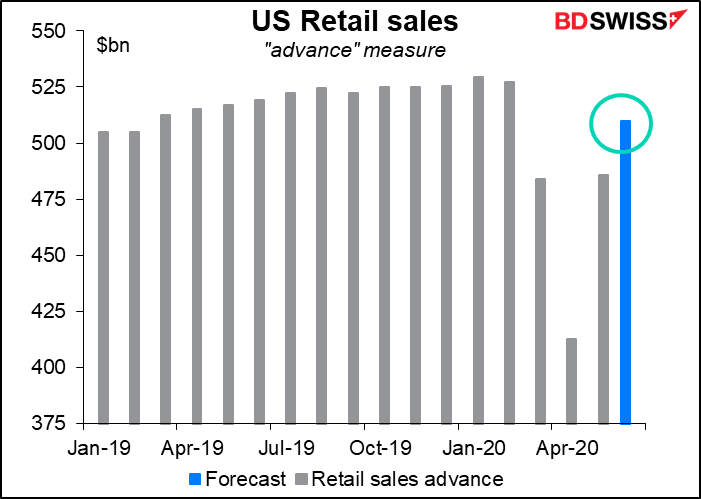 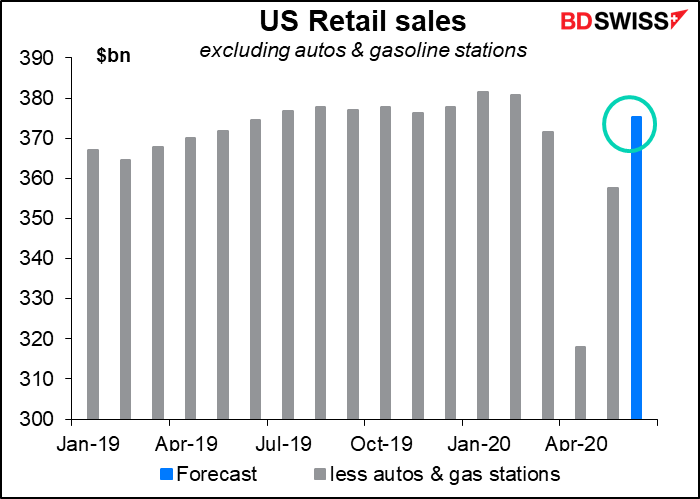 Other measures of retail sales show less of a recovery, but that may be because of less complete measurement. Note that these two lines measure different things: the PRODCO index measures the number of people entering stores, while the Johnson Redbook survey measures the value of sales. Both show less of a recovery than the official retail sales figures, but that may just be because neither includes online sales. 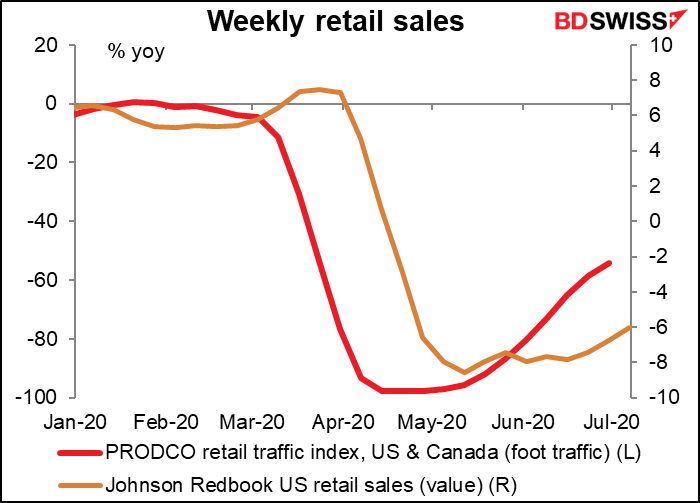 Looking just at the foot traffic, the US recovery is in line with Britain but well behind Europe. 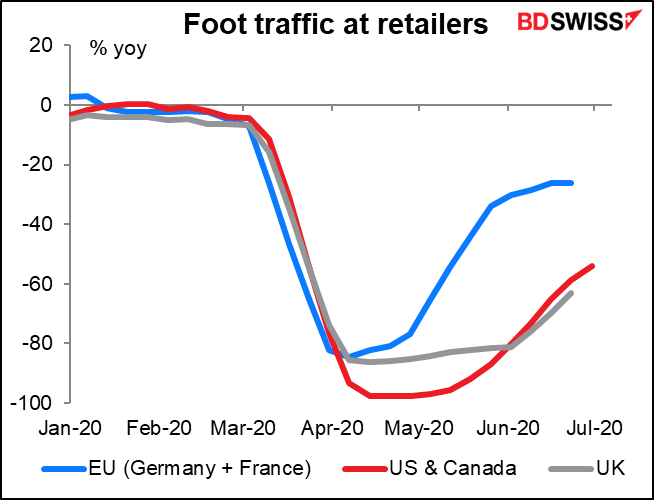 The Philadelphia Fed business outlook survey diffusion index – general conditions, to use its proper and full name, is expected to see a bit of mean reversion. Last month it had the biggest jump in its history (70.6 points) – it’s only natural that it should decline a bit. Yesterday’s Empire State manufacturing index was higher than expected (17.2 vs 9.1 expected) and wound up on the graph at least almost exactly where the Philly Fed index is expected to be. 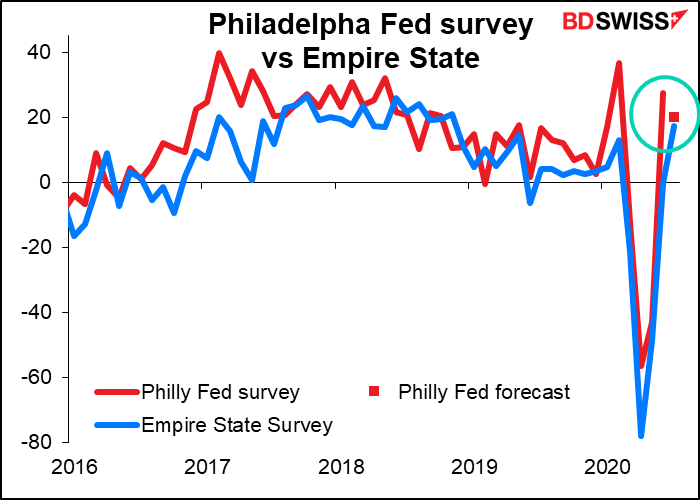 The other key indicator of the day is US initial jobless claims. They’re forecast to be 1.25mn, a relatively small (64k or 5%) decline from the previous week. This would be somewhat of a reversal, because claims have been falling at a slightly accelerating pace for the past three weeks. Still the pace of decline is almost nothing – about 5% or so each week. At that pace, it’ll take another 28 weeks to get back below 300k a week. 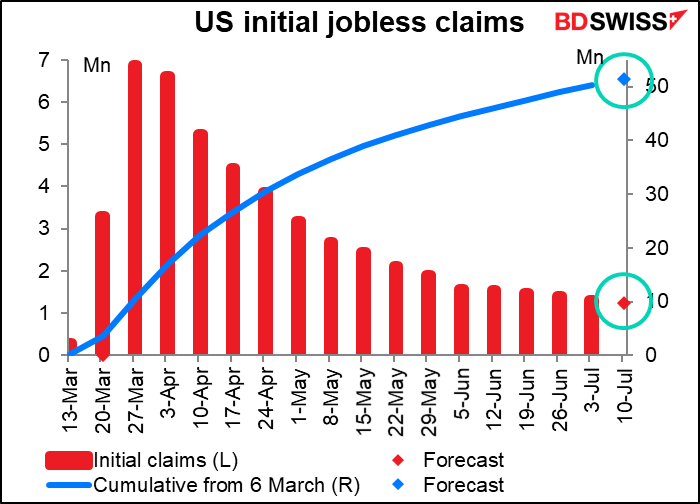 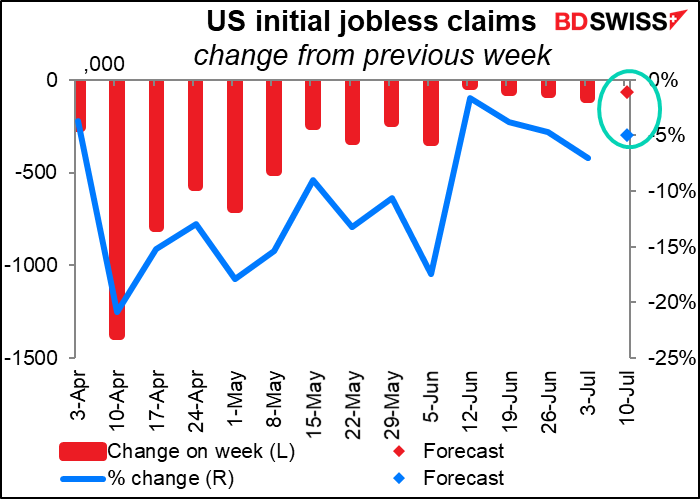 Continuing claims are expected to be down some 562k from the previous week, which is about average for the last two weeks so as good a guess as any. It’s good that continuing claims are declining since that means more people are moving off the unemployment rolls every week than are moving on. However the decline — -3.7% last week – is minuscule. Still very slow progress on getting people back to work, and the decision to shut down many businesses again in California aren’t going to help, either. 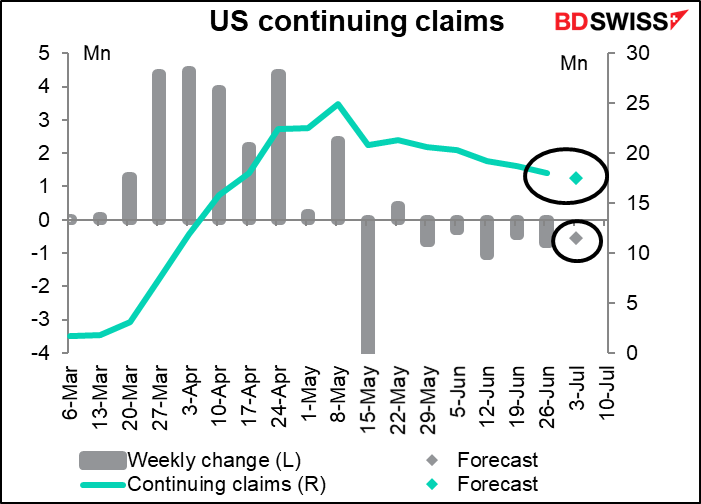 The National Association of Home Builders (NAHB) housing market index is expected to rebound further to 61 from 58. This isn’t bad at all; the average for the five years before the virus hit was 64. Housing has been one of the bright spots in the US economy, helped by a) record-low mortgage rates and b) lots of people who’ve discovered that they can work from home and decided to leave their city for someplace with a lower cost of living. 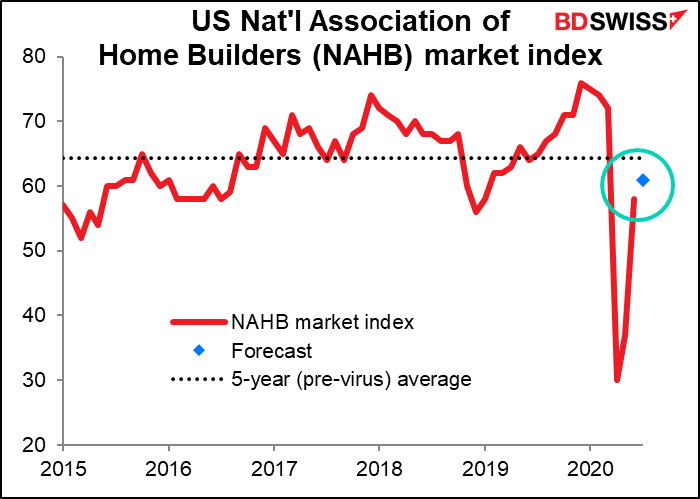 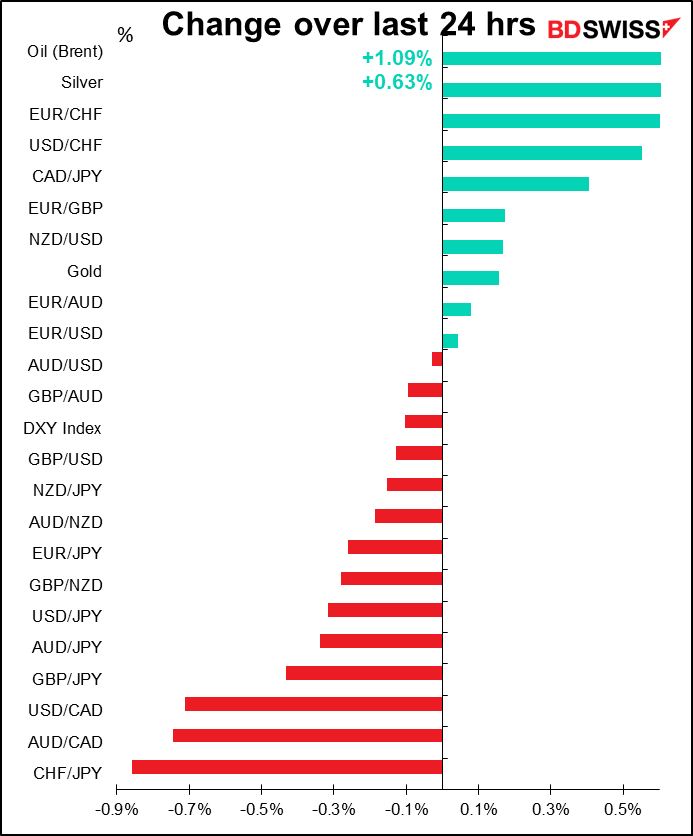