You are at:Home»MARKET PREVIEW»USD, EUR Up as Virus & US-China Tensions Cause “Risk-Off”; EU IP, BoJ Meeting 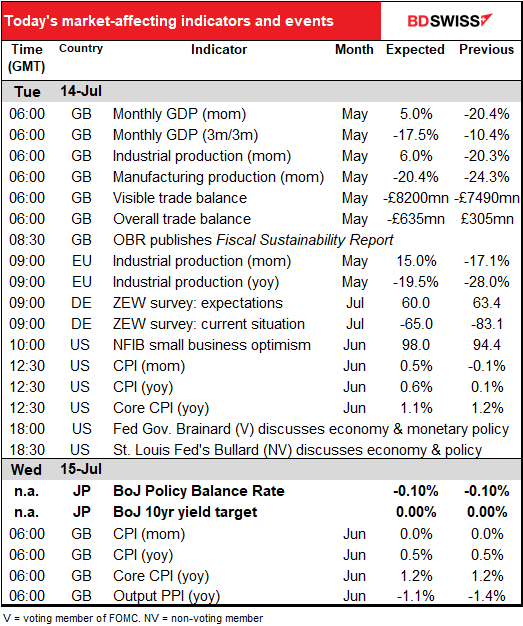 A wild day for sentiment! The NASDAQ opened up 1.1% higher and proceeded to gain to stand +2.0% at one time. It then started to decline and finished the day down 1.5%, or off 2.1% on the day – down 4.0% from the high of the day. The trigger was of course virus news: California announced it will close indoor restaurants, movie theaters, and bars, while Los Angeles and San Diego also announced that schools will go online only this fall. Online schooling is a big hit to the entire economy, because employment suffers — at least one parent will have to stay home to take care of the kids.

California is a huge economy — if it were an independent country, it would be the 5th largest economy in the world. 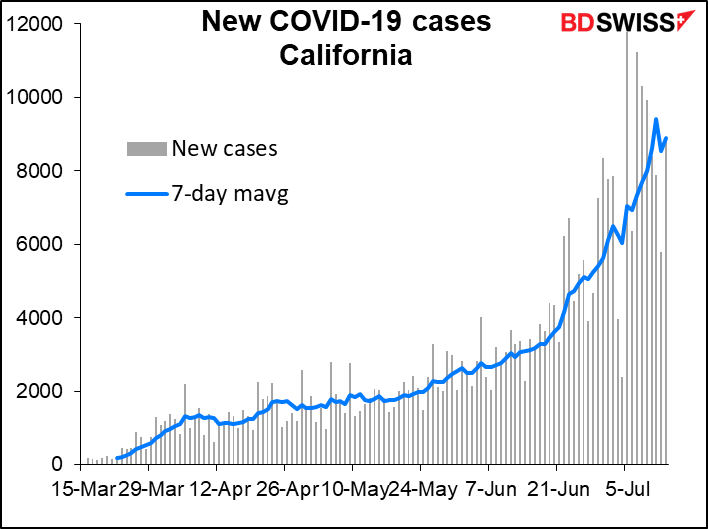 Also hitting risk sentiment was a statement by Secretary of State Pompeo rejecting the majority of China’s maritime claims in the South China Sea. “Beijing’s claims to offshore resources across most of the South China Sea are completely unlawful, as is its campaign of bullying to control them,” the statement said. You can imagine how well that went down in Beijing. The statement raises the stakes in US-China tensions from economic to military, which is a significant escalation.

Note that although EUR was the best-performing currency on a trade-weighted basis, USD gained as well. This is the usual safe-haven flow into USD on bad news, even if the bad news is news about the US.

EUR gained on hopes for some agreement at this week’s EU summit. EUR/CHF was particularly well supported during the trading session. Optimism toward EUR has been rising recently – not only have the Commitments of Traders reports shown that speculators are increasing their long EUR positions, but also the EUR/USD risk reversals recently moved back in favor of calls. The EUR/USD options call/put ratio hit its highest level since October 2017. 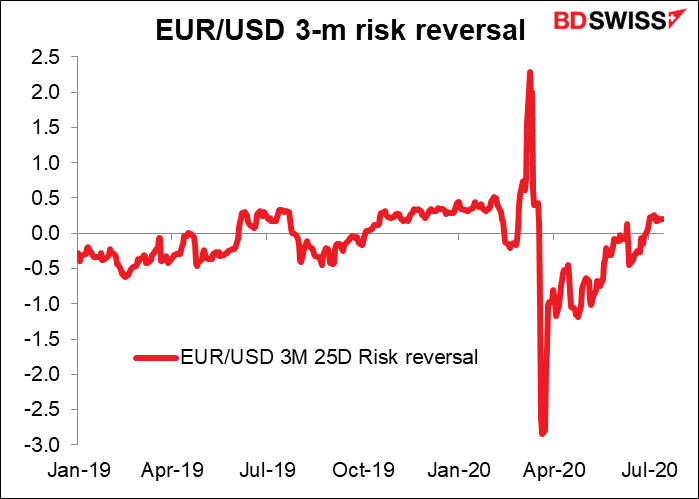 The optimism – and the euro’s strength – were a bit odd, in my view, given comments by German Chancellor

Merkel that cast doubt on the likelihood of an agreement at the meeting. “I don’t know whether one meeting will be enough or whether we will need to meet a second time before the end of the summer,” she said. It looks like she’s trying to lower expectations after she said last week that she “hopes” for an agreement this week. Her comment is noteworthy as she’s been saying that she expects an agreement “before the summer recess,” which would allow for no agreement this weekend but imply a deal a few weeks later. Now she’s talking about “before the end of the summer,” which would be later.

EUR may have been boosted by the Bundesbank’s weekly activity index, which rose to -2.7 from -3.5. That puts the implied GDP at -2.8%. German growth continues to recover faster than US growth, according to the Fed’s comparable index. 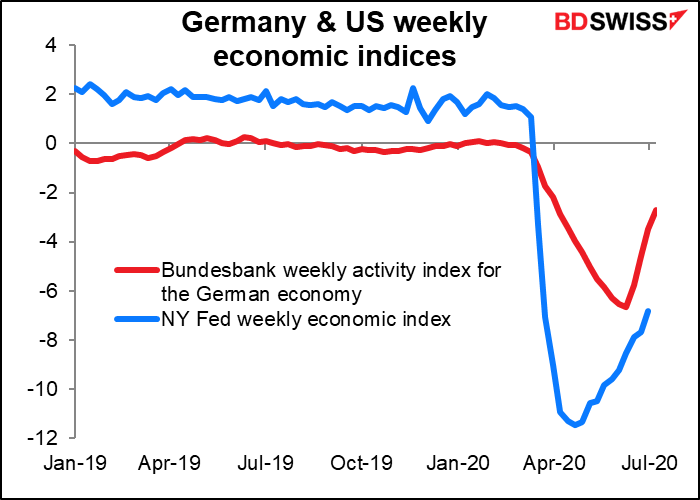 GBP was the worst-performing of the major currencies I follow. Unfortunately I couldn’t find specific reason – I suspect it was just a residual as investors needed something to sell when buying EUR and USD. One comment did attribute the move to remarks by Bank of England Gov. Bailey that the UK economy is recovering but he is worried about the jobs market, but that should come as no surprise to anyone as every central banker has said the same thing.

GBP seems likely to fall further today as this morning’s short-term indicators largely disappointed. May GDP was up a mere 1.8% mom vs +5.5% expected. Industrial production also missed expectations — +6.0% mom vs +6.5% expected. Manufacturing production beat however (+8.4% mom vs +7.8% expected), as did the trade figures – but the size of the discrepancy is so large that it looks like another distortion caused by moving gold around (an overall trade surplus of GBP 4.3bn vs a deficit of GBP 635mn expected).
Oil fell further in anticipation that the OPEC+ Joint Ministerial Committee meeting that begins today would decide to taper off the group’s output reductions (see below).

The day’s news already got started with the UK short-term indicators, which you may have seen while drinking coffee from your GBP 180 Ember Travel Mug, as I mentioned yesterday. I won’t bother going over those again.

While drinking your coffee, you can pour over the UK Office for Budget Responsibility’s (OBR) 2020 Fiscal Sustainability Report. The OBR “will present three alternative scenarios for the economy and the public finances over the medium-term, an assessment of their implications for fiscal sustainability and a discussion of fiscal risks over the medium and long-term.” This will be particularly interesting in light of the explosion of government borrowing recently, although I hasten to add that this is nothing unique to Britain by any means.

Market participants will be particularly interested in what the OBR has to say about how quickly the economy returns to normal and what the impact of Brexit is likely to be on growth. 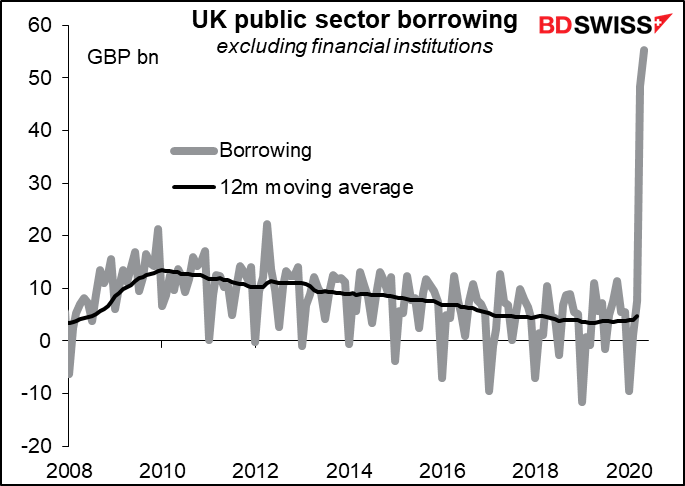 Eurozone industrial production for May is expected to bounce back on a mom basis, but still be down almost 19% yoy. That’s exactly where it should be, according to the Eurozone manufacturing purchasing managers’ index (PMI) for that month. 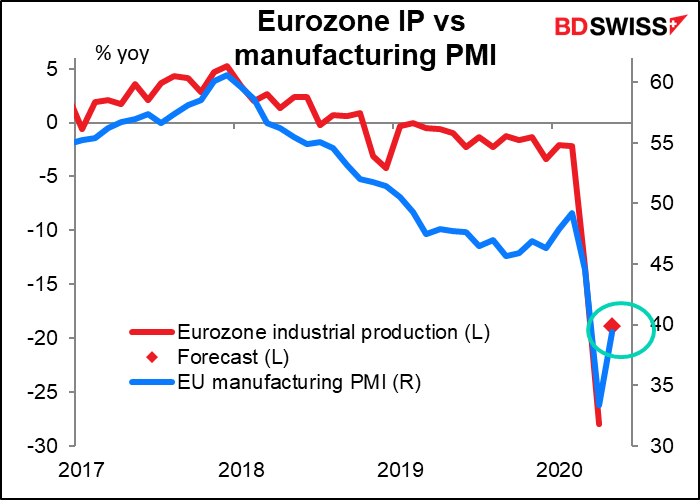 Looking at the index itself, the forecast recovery isn’t expected to bring production back even to the levels of March. But remember this was May. At least it’s expected to confirm that April was the nadir. 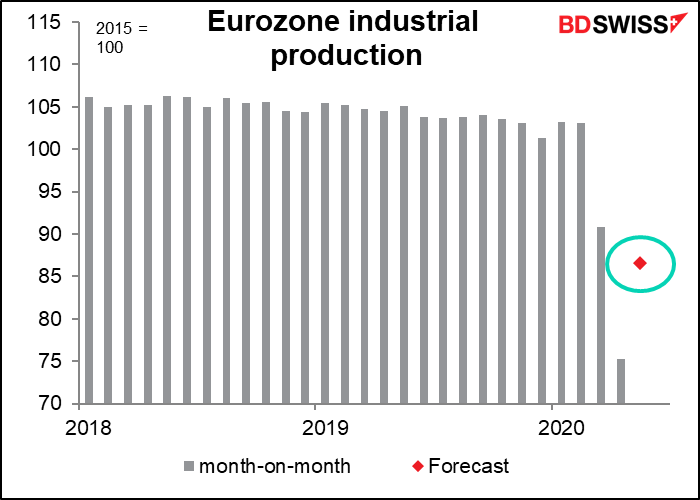 The ZEW survey is expected to show continued improvement in the current situation. Expectations however are forecast to fall a bit – perhaps acknowledging the reality that “opening” doesn’t necessarily mean “all clear.” 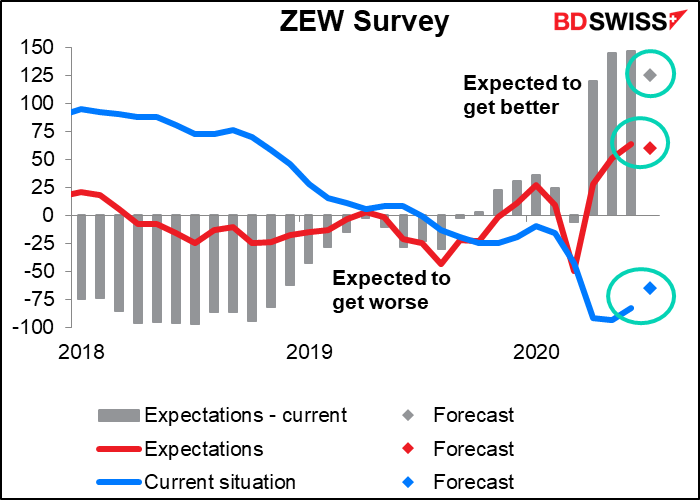 The National Federation of Independent Business (NFIB) small business optimism index is expected to bounce back further. It’s forecast to be higher than the March level, which is pretty good. The “hiring plans” index, which is released earlier, already bounced much of the way back (16 vs Jan-Feb average of 20, Q4 2019 average of 19.3). 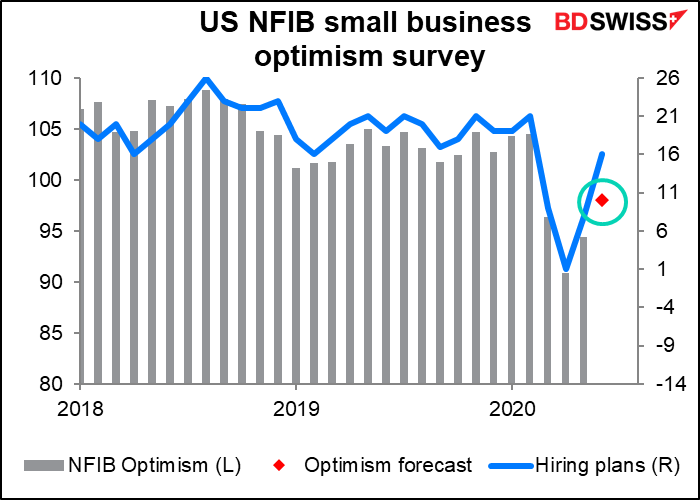 The relatively small drop in the index and the quick rebound is a testimony to the quick aid that the government came up with. The decline in 2008/09, when the Republicans withheld aid in an attempt to make President Obama a one-term president, was much much worse. 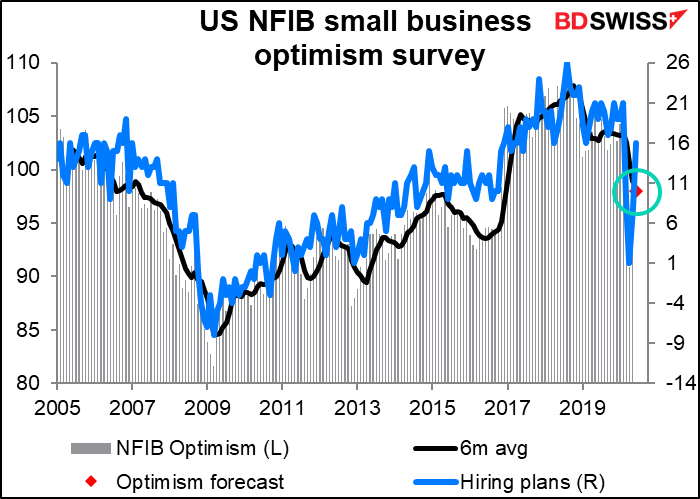 US consumer price index (CPI) used to be one of the major indicators out each month, but nowadays no one is really worried about inflation. On the contrary, the major reason to monitor the CPI is to see if we’re headed for deflation.

At the headline level, the market expects prices to pick up a bit – the forecast +0.5% mom rise in prices would be the fastest mom increase since Sep 2017 (also +0.5%). The cause was probably the 10.7% rise in retail gasoline prices during the month. But the core index – which excludes energy costs – is expected to show a slight slowing in inflation by 1 tic. That’s the more important figure. While I doubt if any inflation data would be cause for a change in policy right now, this number certainly wouldn’t argue for an early lifting of rates. 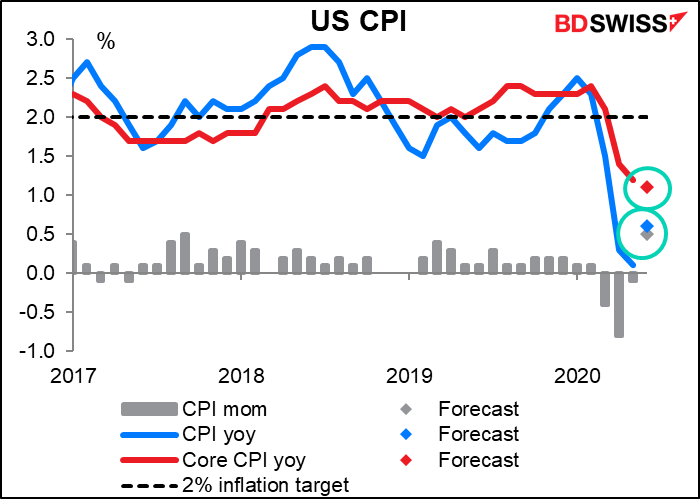 Today is also the first day of a two-day meeting of the OPEC Joint Ministerial Monitoring Committee. This is the technical panel that reviews OPEC output and makes recommendations to the full organization. The group has imposed quotas that cut its overall output by 9.6mn barrels a day (b/d) for May, June and July. These cutbacks are scheduled to expire at the end of July and output allowed to rise by 1.9mn b/d, or 7.7mn b/d below the benchmark period. The Committee will discuss whether to keep the existing cutbacks or let them taper off on schedule. Press reports suggest that they’re leaning towards the latter option, i.e. allow production to rise somewhat. I’ll discuss this question in more detail tomorrow, when they’re expected to announce their decision. There could be some leaks from the meeting today, which may keep oil prices – and CAD – volatile.

Overnight the Bank of Japan Monetary Policy Meeting Committee meets. Given the signs of a nascent recovery, the BoJ is likely to maintain its current policy stance.

The Eco Watcher’s survey is back to where it was in November and December, before all of this hit. This suggests that the hard-hit service sector is recovering. Meanwhile, in the recent BoJ Short-Term Survey of Economic Conditions (Tankan), the financial situation and the lending attitudes of banks diffusion indices remained positive, indicating that the financial support the BoJ and the government are providing is working as intended. There’s therefore no need for the BoJ to tinker with its lending programs. 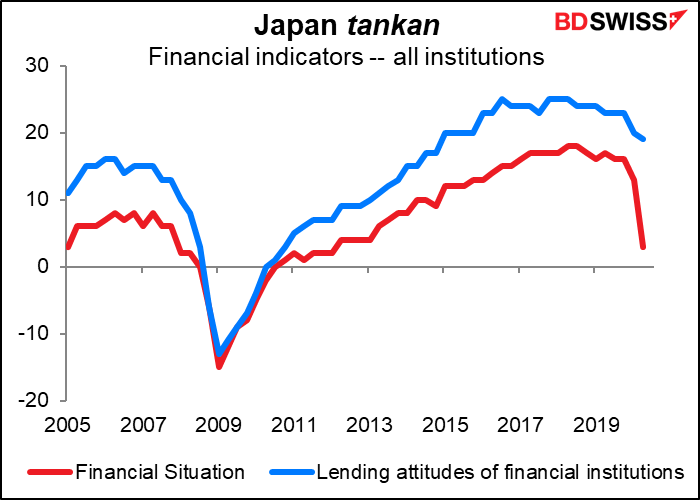 The BoJ will also release its quarterly Outlook Report at the time. It’s likely to downgrade its outlook for overseas economies, but any changes to the domestic view should be minimal – in fact, they could even be positive, in line with the improvement in some high-frequency data. But expect caution about the outlook.

About the only point in question is whether they once again mention their concern about “the possibility that the momentum toward achieving the price stability target will be lost,” a boilerplate phrase that disappeared in April along with the usual assessment of the inflation target. There may also be some discussion of the Bank’s USD fund-supplying operations, courtesy of the US Fed. Now that conditions in the money markets have calmed down somewhat, they may want to scale those back to avoid moral hazard.

The July MPM will be the first meeting for new Board member Toyoaki Nakamura, a former finance official from Hitachi, who succeeds Yukitoshi Funo (ex Toyota Motors). Nakamura’s press conference upon appointment didn’t show any notable dovish or hawkish bias and therefore shouldn’t alter the balance of opinion on the Board.

Then early Wednesday morning once again we have a daybreak UK economic indicator, UK inflation data. Unlike in the US, the market looks for another month of stable prices. This would bring the headline rate of inflation down one tic closer to deflation. The core rate of inflation is expected to remain unchanged. The slowdown in headline inflation will come as no surprise to the Bank of England, which said after the last meeting in June that “CPI inflation is well below the 2% target and is expected to fall further below it in coming quarters, largely reflecting the weakness of demand.” 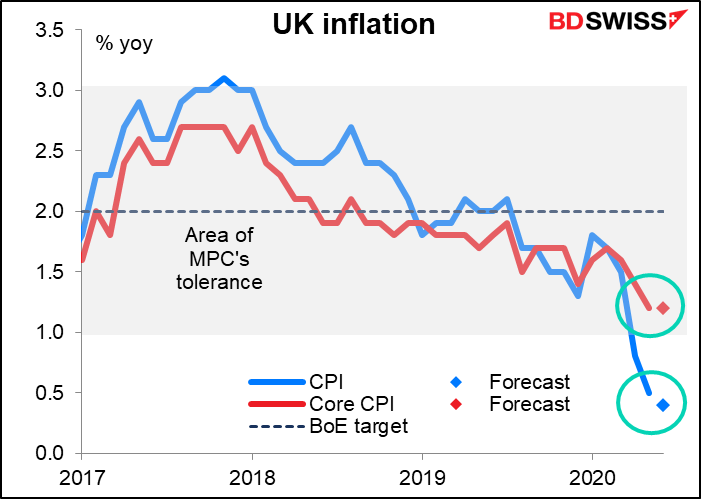 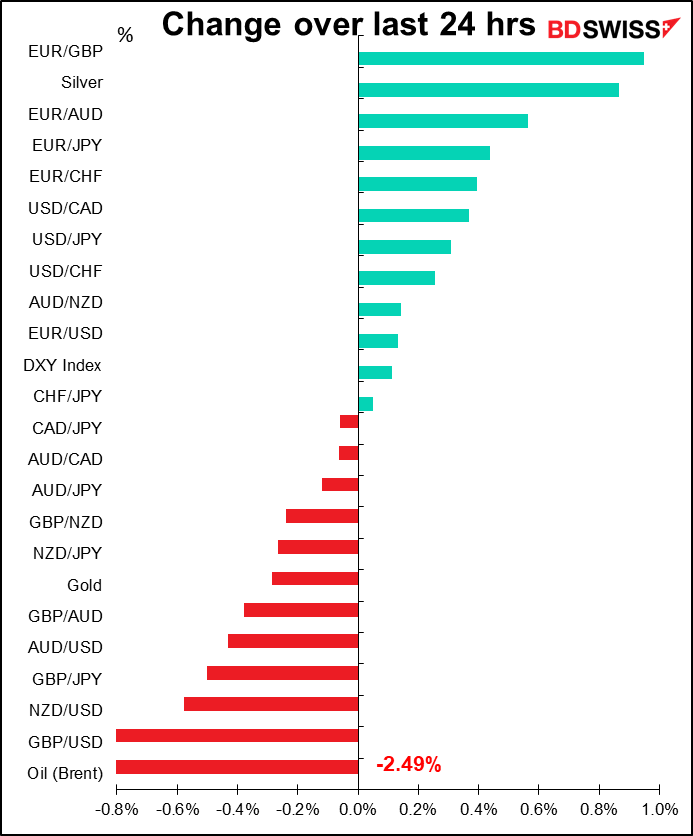