Very much a “risk-on” day today, with almost all stock markets in Asia trading higher at the time of writing (Thailand and Australia being the only exceptions). China is leading the way with the CSI 300 (300 “A” shares listed on the Shanghai and Shenzhen exchanges) up 4.9% this morning.

It’s pretty amazing to me that Chinese stock are up sharply this year: the CSI 300 is up 13.2% ytd and the Shenzhen Composite up a whopping 22.6%. Could anyone have imagined in February that the China stock market would be the best-performing market in the world? (Although NASDAQ is up 13.8% ytd too – not bad at all).

No, I take that back – Venezuela is the best-performing market, up 234% ytd. But that’s in domestic currency terms. Bloomberg doesn’t give a figure for change in value in USD terms. Wonder why.
Elsewhere, Copenhagen at +11.8% is about the only European market in positive territory. I don’t know why it’s not only up, but up so much when everything else on the Continent is down.

Why are people in such a good mood today? One reason may be a front-page editorial in China’s Securities Times, a state-run newspaper, which suggested that a “healthy” bull market after the pandemic is now more important than ever to the economy. That suggests the government is likely to do what it can to support the stock market.

Bloomberg on the other hand says it’s because “coronavirus cases in the US increased by less than the seven-day average.” I guess that’s true enough, but it seems pretty lame good news – things aren’t as bad as they used to be is hardly a reason to celebrate, no? But maybe it is. Not only are there fewer cases, but also fatalities aren’t rising as quickly as cases are, and nowhere near as much as they did in the first wave – perhaps because the virus is hitting younger people now? US virus cases surged by an average of +1.7% over the holiday weekend, down from an average of +1.9% in the five previous days, while fatalities on average rose by +0.2%, down from an average of +0.6% in the previous five days. The surge in cases clearly doesn’t support the trend in the US to reopen the economy. However if fatalities continue to be this much lower, people may get more confident that either doctors have learned more about how to treat the virus or society has learned how to protect the most vulnerable people (or maybe they’ve all died already). 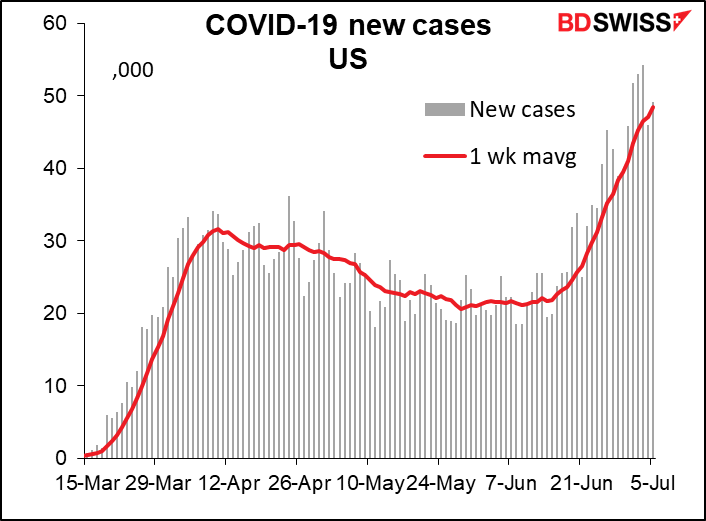 Note that because of the Fourth of July holiday, there was no Commitments of Traders report on Friday. The report will come out tonight.

US politics: Nothing germane to today’s market, but a few points of longer-term interest
There have been a lot of guesses as to what Trump might do when he loses the election in November. My favorite theory up to now was that he takes a trip to Europe – say, to Ukraine or some other country near Russia – and as they approach, he tells the pilot to keep going to Russia, where he defects. This isn’t so wild an idea; Russian TV personalities have already joked on TV about preparing an apartment for him. But the founder of CNBC came up with a more realistic scenario, one that explains a lot of what he’s currenty doing. In a nutshell, Trump claims that the Chinese interfered with the election and through various measures, aided and abbetted by the Attorney General, he delays the official count. If it’s delayed long enough, the vote is invalidated and the House of Representatives has to decide who wins. At that point, through some quirks of the Constitution that virtually no one knows about, he would probably win. See Founder Of CNBC Says Trump Has A Plan To Stay In Office Regardless Of What The Voters Decide This sounds more realistic than the flight to Russia theory, especially as it builds on what he’s currently doing and so requires no big leap of the imagination, just a continuation of the current trend.

Ghislaine Maxwell arrested in US: Jeffrey Epstein’s right-hand woman, Ghislaine Maxwell, was arrested in the US and is reportedly being held in the same jail that he was held in when he “committed suicide.” While much of the reporting will focus on what she did — she’s accused of “helping Epstein to recruit, groom, and ultimately abuse” girls as young as 14, according to the indictment – the really interesting part is whom she did it for. Of course Epstein, but who else was there, and what were they up to? This is what everyone wants to know. Personally, I would not underwrite a life insurance policy on her at this point in her life, although one has to wonder: why was she hanging out in the US to begin with? Why does she think she has a better chance at survival than her boss did? You should follow this story as it has the potential to rock US politics.

I couldn’t help noting this: I saw this headline and had to pause for a moment to contemplate the irony that Trump finally achieved his main campaign goal: not only closing off the US border with Mexico, but also getting Mexico to pay for it.
Mexican State Closes Border With Arizona As COVID-19 Outbreak Worsens
Oh, and speaking of borders, just in case you didn’t have enough to worry about:
Mongolia Quarantines Russian Border Region Over Bubonic Plague Suspicion (although actually, plague is more common than you might think; every year 5-10 people catch it in the US.)
And in case people in Florida don’t have enough to worry about with soaring COVID-19: Deadly Brain-Eating Amoeba Confirmed in Florida

The main point of interest today is the Reserve Bank of Australia (RBA) meeting overnight. That’s not likely to result in any fireworks, so I’m including it in its chronological order, as the last thing on the schedule.

I mentioned the German May factory orders on Friday, but I don’t expect anyone to have remembered what I said. I’m not sure it’s even worth repeating it though, as the data are probably out already anyway and have proved me wrong. Orders are expected to jump on a mom basis, but that’s only because April was such a disaster. Orders are still expected to be far below even March’s level (based on the forecast mom change). At least though they may add to the evidence that April was the bottom. 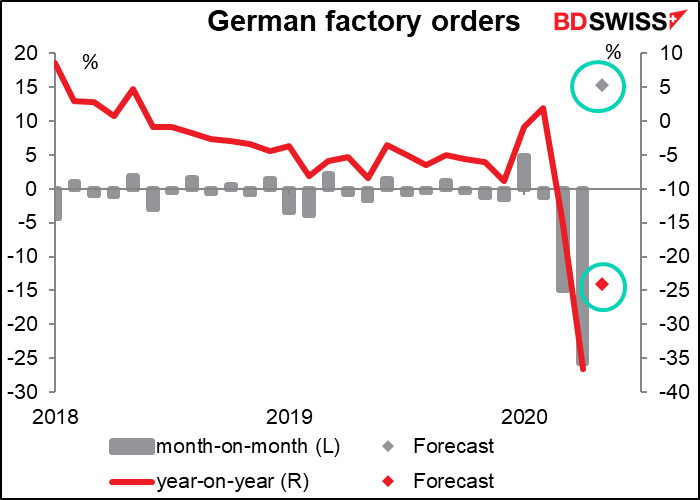 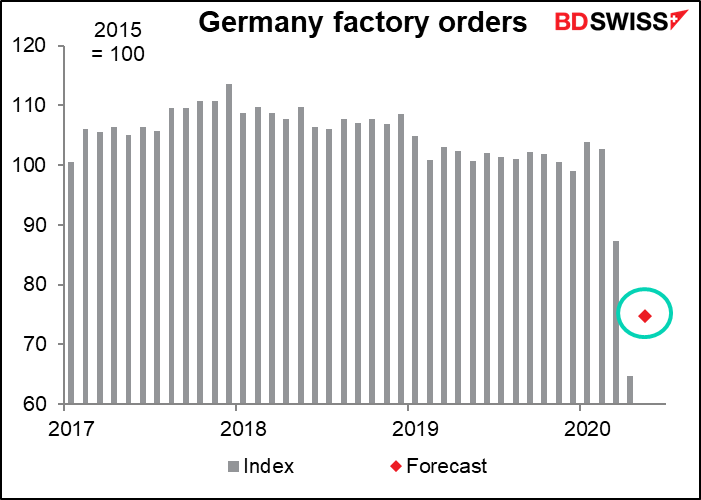 Last week’s data on Swiss sight deposits showed that the Swiss National Bank (SNB) is still serious in its commitment to keep intervening if necessary in the FX market if it feels it’s necessary. As EUR/CHF headed down, they started intervening again. And this week? 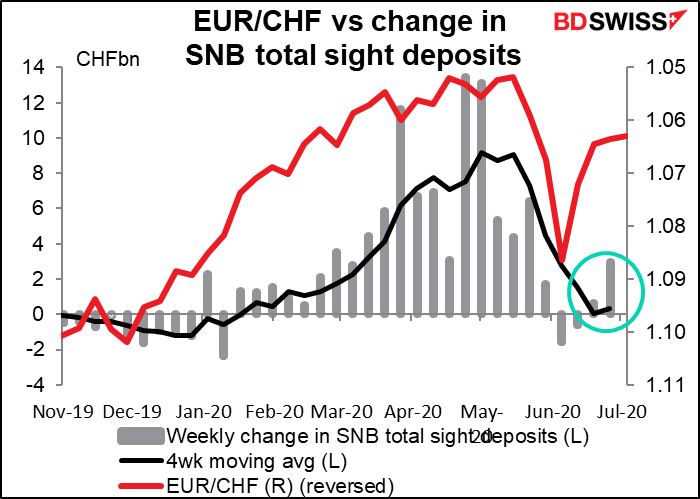 I’m not sure whether the UK construction purchasing managers’ index (PMI) gets the same amount of attention that it used to, now that preliminary versions of the other UK PMIs are released. This PMI was impressive for hitting 8.2 back in April, which as far as I know is the lowest that any PMI has ever reached (narrowly beating the UK service-sector PMI for that month at 13.4). It’s expected to bounce back to be in line with the other PMIs this month however. 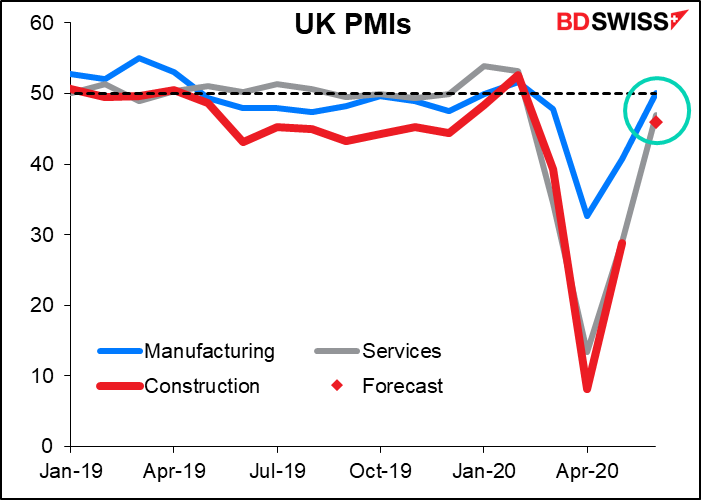 I don’t usually cover EU retail sales as they’re not particularly market-affecting, but retail sales are a key metric in trying to gauge how well economies are bouncing back 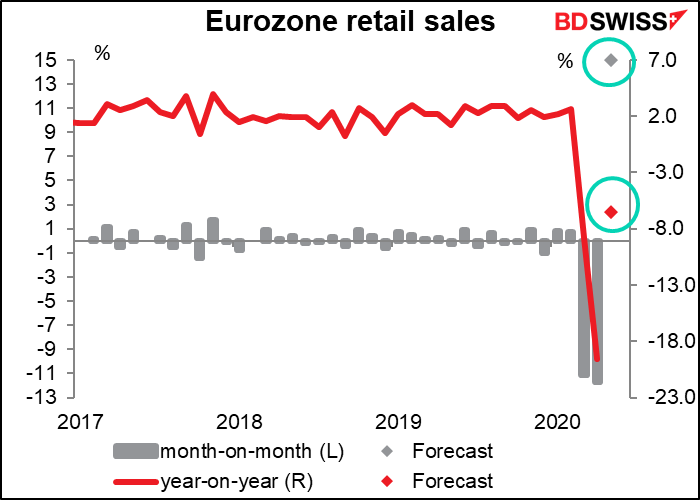 As usual, I don’t think the percentage change in the index is particularly enlightening, because the numbers are so big. So here’s a graph of the index itself. Unfortunately the mom and yoy forecasts are not consistent, so I took a weighted average of the two, the weights being how many people forecast each (20 for the mom change, 11 for the yoy change). What is shows is that sales are expected to bounce back approximately to March’s level, which is still well below the pre-lockdown level. 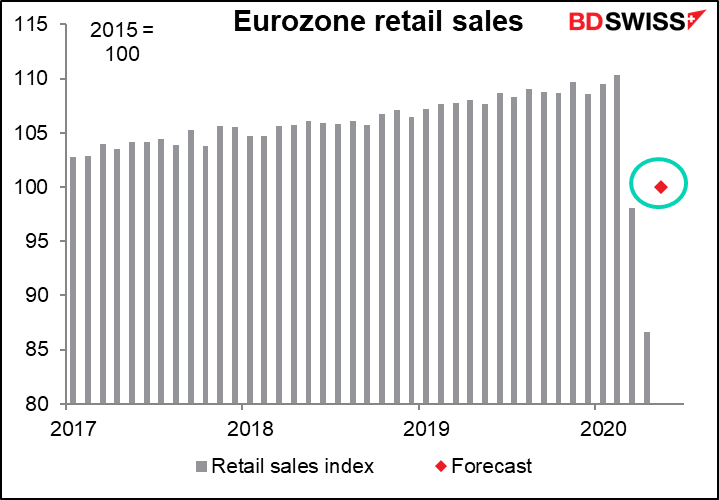 The Institute of Supply Management (ISM) non-manufacturing PMI for the US is expected to come back to 50, which would be a bit better than the Markit version of that index. Of course the ISM version didn’t fall anywhere near as much, either. Coming back to 50 just means it’s stopped contracting by the way, and considering how much it contracted, that’s not all that great. It just means activity ha bottomed at an extremely low level. 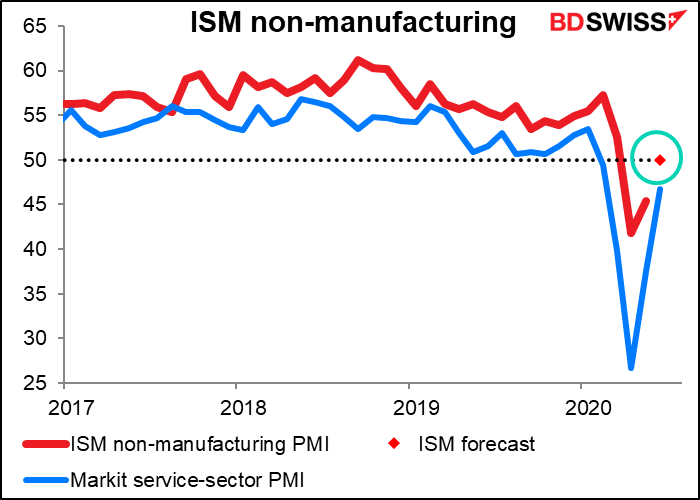 The Bank of Canada quarterly business survey is important in determining the Bank’s view. It’s kind of like a cross between the Fed’s Beige Book and the Banko of Japan’s Tankan. There are no forecasts available, but if you trade CAD you’ll probably want to take a butcher’s at it. Overnight we get the Japan labor cash earnings. As promised, without comment. 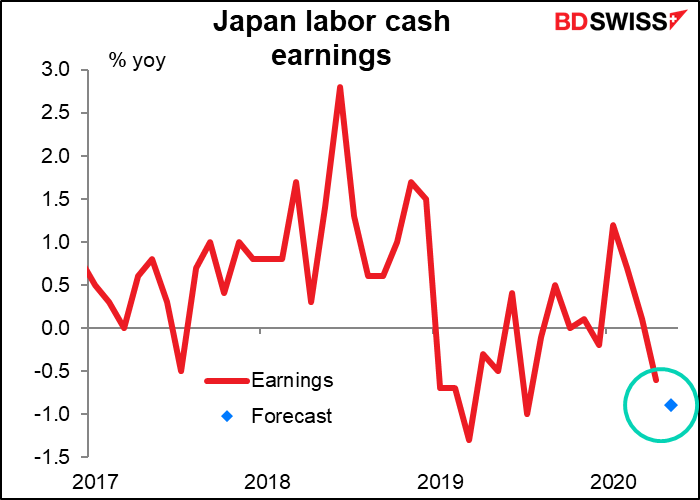 Then comes the feature of the day: the Reserve Bank of Australia (RBA) meeting. As I said last month about that meeting, it should be relatively uneventful. The Board has pledged not to increase the cash rate target “until progress is being made towards full employment and it is confident that inflation will be sustainably within the 2–3 per cent target band.” On the other hand, Gov. Lowe has said it was “extraordinarily unlikely” that the RBA would implement negative rates; instead, they would first choose to increase their bond purchases. But in fact they’ve already started to reduce their balance sheet from the recent peak. With tightening ruled out for now and no sign that they think further loosening is required, the RBA seems likely to be on hold for the indefinite future. Nor do I expect any new initiatives. Deputy Gov. Guy Debelle said just a week ago that “The monetary policy actions have worked as expected by lowering the key interest rate benchmarks in the economy to historically low levels, which has been transmitted through to historically low borrowing rates for households and businesses, as well as governments.”

The only question to me is whether the RBA, like the RBNZ last week, will make some negative comment about the level of the currency, which has appreciated about 2% vs USD since the last meeting (the minutes of the 24 June RBNZ meeting noted that “the exchange rate has appreciated since the May Statement, dampening the outlook for inflation and reducing returns for New Zealand exports.” That sent NZD down somewhat after the meeting.)
On the other hand, given the sharp 16.9% rebound in retail sales in May, which brought sales back to above where they were before the virus hit, and the country’s relative success in quelling the virus, they may be even more optimistic this time and AUD could appreciate after the meeting. That seems more likely to me. But no comment about the exchange rate or a neutral comment seems even more likely. 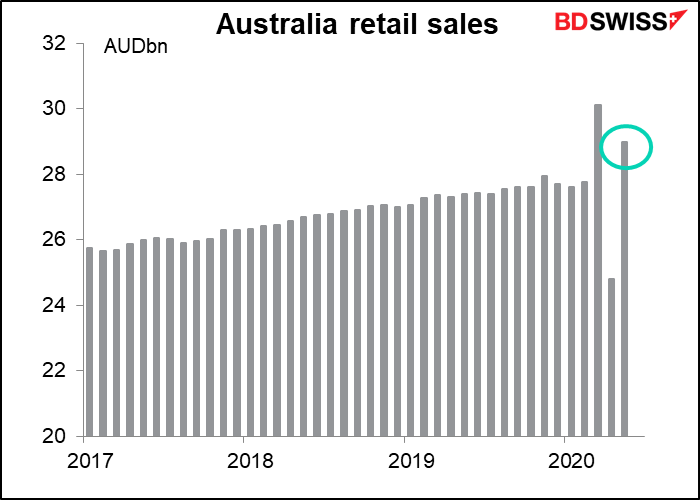 Then early in the European day Tuesday, German industrial production is expected to rebound sharply in May. Unfortunately I have to write this before seeing Monday morning’s German factory orders for May. In percentage terms it seems like a big bounce, but actually it would leave IP still well below even March’s level. 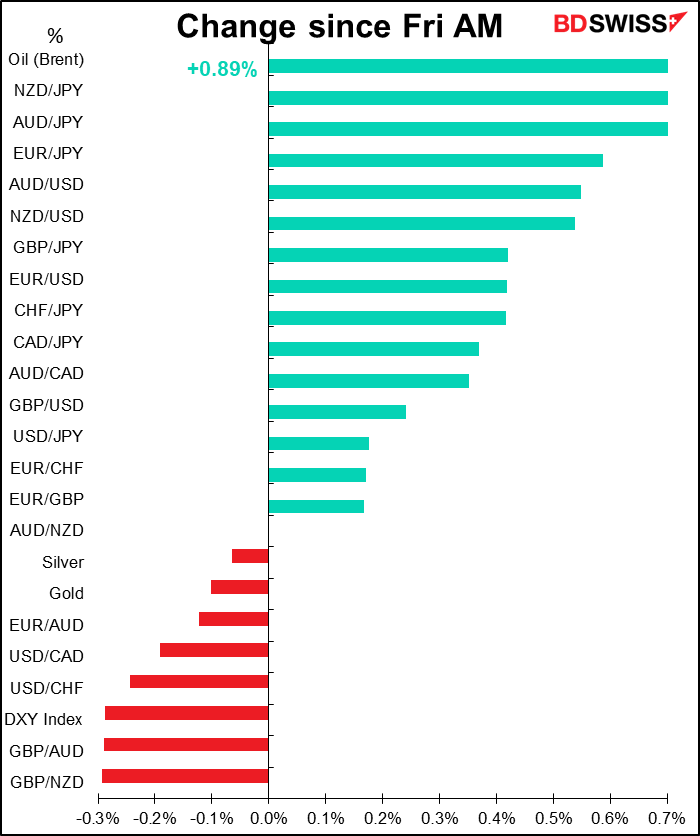