You are at:Home»MARKET PREVIEW»“Risk-on” as Biden’s Chances Rise; more Speeches, US Jobless Claims 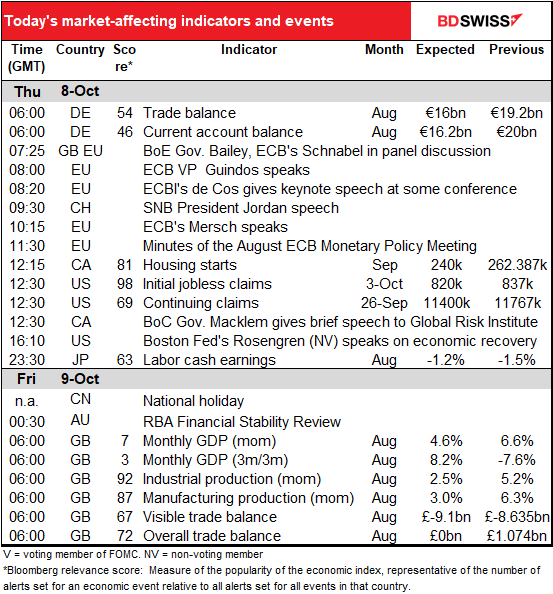 Biden/Harris debate: I didn’t see the debate, but looking through my Twitter feed, two points stand out: 1) A fly sat on Pence’s head for 2 mins 3 seconds, and 2) Pence seemed to have an eye infection, which many people are claiming is a possible symptom of COVID-19 but in fact is quite a rare one. Otherwise, according to the New York Times, Pence changed the subject every time he was asked a tough question, and like Trump last week, refused to say specifically what he would do they lost the election. It is unprecedented that the US administration refuses to guarantee a peaceful transfer of power.

Although the market is still reeling from yesterday’s shock order from Trump to stop the negotiations over a comprehensive stimulus package, risk sentiment recovered Wednesday thanks to the potential for specific, targeted aid legislation, more  constructive Brexit rhetoric, and reports that Trump’s health is stabilizing (physical health, that is.)

Overall, investors seem to be focusing more on the increasing odds of a Biden win and what that might imply for a stimulus package after the election (good, since the Democrats might well control both houses of Congress as well as the White House.) With that eventuality in mind, Trump’s decision to stop negotiations now is ultimately a risk-on move, as it increases the likelihood of a decisive Biden win. (The theme song for this election should be Bob Marley and The Wailers’ Them Belly Full –“ a hungry mob is an angry mob.” In July, nearly 30mn people in America reported not having enough to eat.)

The commodity currencies CAD and AUD were the best performers in this risk-on environment. CAD was the best-performing currency, through no fault of its own as far as I could tell. On the contrary, oil prices were lower and the Ivey purchasing managers’ index fell to a four-month low of 54.3 in September from 67.8 in August.

NZD was the exception. It fell sharply after the Reserve Bank of New Zealand (RBNZ) briefed reporters on additional policy measures. They made it clear that they’re preparing to do more, including possibly a negative official cash rate. “We have a least regrets approach to thinking how much stimulus to deliver,” RBNZ Chief Economist Yuong Ha said. “We’d rather do too much too soon than too little too late.”

JPY, USD and CHF were all lower. USD/JPY moved back above ¥106 for the first time since midi-September.

The minutes of the September Federal Open Market Committee (FOMC) meeting underscored the Committee’s views’ on fiscal stimulus – the key line that everyone was quoting was that “many participants noted that their economic outlook assumed additional fiscal support and that if future fiscal support was significantly smaller or arrived significantly later than they expected, the pace of the recovery could be slower than anticipated.” The phrase “significantly later than expected” is important, as it indicates the Fed may not view stimulus today as equivalent to stimulus three months from now, when Biden is (we assume) president. Fed Chair Powell made similar comments yesterday. That’s probably because of the increasing number of companies folding and jobs being lost permanently. It’s much harder to resuscitate someone once they’re dead. 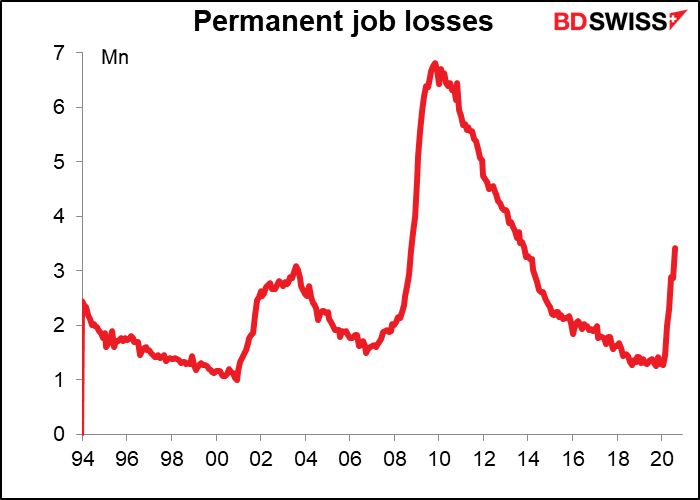 The lack of any progress on the negotiations may be short-term positive for the dollar due to the risk-on, risk-off phenomenon, but it is longer-term negative for the dollar as it’s likely to keep the Fed erring to the dovish side. Like the RBNZ above, the Fed too has a “least regrets” stance – Powell Tuesday  said, “At this early stage, I would argue that the risks of policy intervention are still asymmetric. Too little support would lead to a weak recovery…By contrast, the risks of overdoing it seem, for now, to be smaller.”

The Fed is content to stand pat so long as the economy seems to be recovering, but once the data start to show the recovery stalling or heading in reverse, it’s likely to move fairly quickly, which could put downward pressure on the dollar. 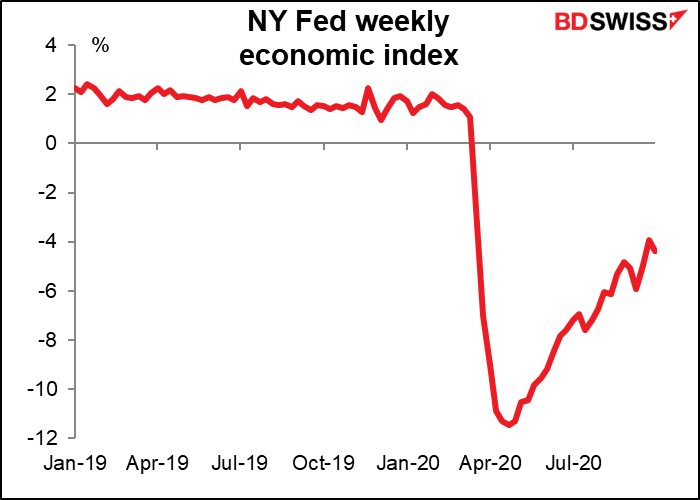 GBP is subject to a lot of intraday headline risk. It weakened yesterday on a Bloomberg report that the UK plans to quit the Brexit talks if no deal is in sight by 15 October (next Thursday’s EU Council meeting), but then reversed course on some positive reports:  the EU allegedly wants its members to show more flexibility on fishing, while the UK reportedly might be willing to move on the issue of state aid. In any case, next week’s EU Council meeting is not the hard deadline we had thought it would be but rather yet another “stock-taking exercise.”

The fact that they are moving into more and more detailed negotiations on more and more specific topics is a good sign, because it implies that they’ve reached some measure of agreement on the overall principles. This makes it more likely that they can achieve some kind of deal. However, deal or no deal, the UK is leaving the EU on 1 January 2021 and that will be a big shock to the UK economy either way.

Another day with more speakers than indicators.

Among all the speakers, I’ll be most interested to hear what if anything Swiss National Bank (SNB) President Jordan has to say. They haven’t changed policy since 2015 so normally he doesn’t capture the headlines that much, but they just started releasing their FX intervention data in response to pressure from the US Treasury. He might respond more to the Treasury’s objections to their actions.

Really, the US should be grateful to Switzerland, not criticizing them, IMHO. The SNB intervenes in EUR/CHF and so pushes up the EUR. Of course it then sells some of those EUR for USD, which would tend to push USD up relative to EUR, but since EUR is starting from a higher place to begin with, it should still leave EUR/USD lower than if the SNB hadn’t intervened at all. (I think – I admit, I’m only going on my reasoning with this, not that I’ve run any numbers.) On the other hand, some people have criticized the SNB as “a quasi-government hedge fund following a global macro investment strategy.”

Canada is undergoing a housing boom, like many countries are, as record-low interest rates intersect with newfound mobility by people who’ve discovered they can work from home. Plus there’s still pent-up demand from the several months when people couldn’t go out looking at houses. While housing starts are expected to be down from the previous month, indeed from the previous two months, they’re still expected to be near the previous peaks for the last several years. 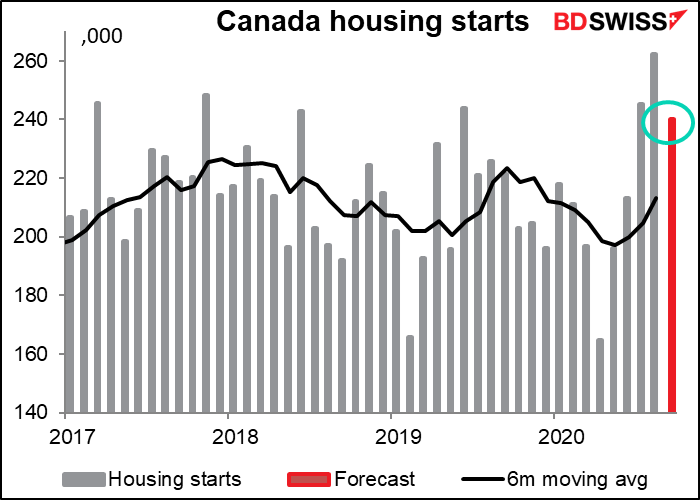 US jobless claims are expected to be not so great. Initial claims are forecast to fall by just a bit. 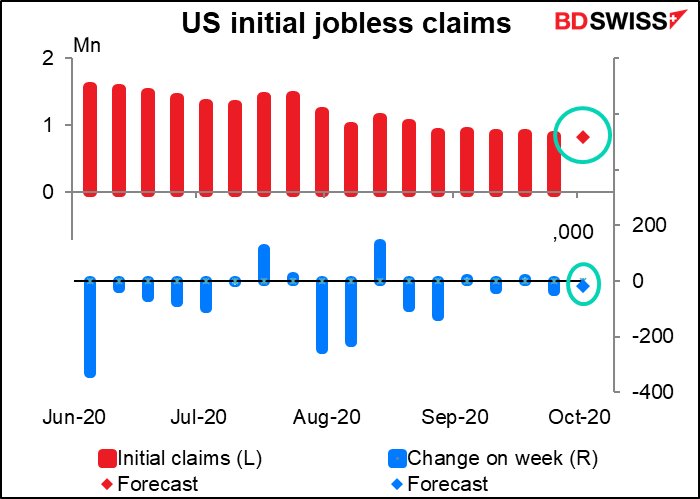 Continuing claims have been revised down just recently. The market consensus forecast a few days ago was for a rise, but now it’s for a decline. That’s probably because there are so few estimates – Blomberg only has eight estimates for this figure, vs 46 for initial claims. So one or two late entries can shift the consensus for continuing claims. 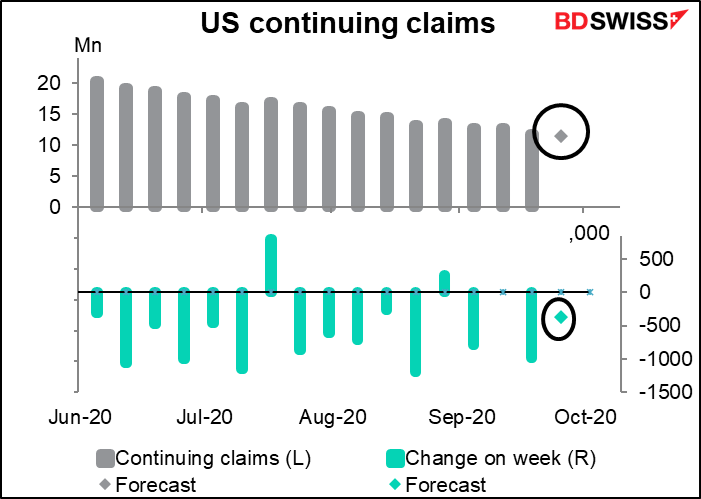 In fact it would be very worrisome to see continuing claims rise, because with the duration of unemployment increasing, many people are dropping out of the continuing claims figures just by the fact that they’ve exhausted their state unemployment benefits. These usually last only 26 weeks, meaning that people who lost their jobs on or before the week of 28 March will now probably have dropped out of this series. The 20th and the 28th were the first two weeks of huge initial claims (3.3mn and 6.9mn, respectively) and so as those people fall out of the system, the continuing claims should go down. 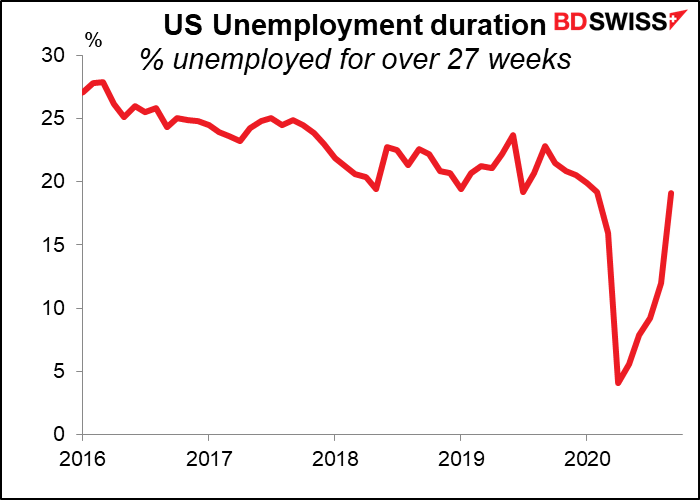 Overnight, the Reserve Bank of Australia (RBA) releases its Financial Stability Review. This will probably be of only minor interest to the FX market, with some technical details about this and that having to do with the banking system.

I think the market forecast of a 4.6% mom rise in GDP would be disappointing. In a recent speech, Avoiding Economic Anxiety, Bank of England Chief Economist Andy Haldane said that “Having fallen precipitously by 20% in the second quarter, we expect UK GDP to have risen by a vertiginous 20% in the third quarter – by some margin its largest-ever rise.” But he also said that “The pace of recovery has varied, starting slowly in May, picking up pace rapidly during June and July and is then expected to have slowed a little during August and September.” Unfortunately, if August GDP is up 4.6% mom and Q3 is to rise by 20% qoq, then September would have to rise by 7.6% mom – not likely, from what Haldane said. So I think this result would be disappointing to the Bank of England and make further stimulus likely – GBP-negative 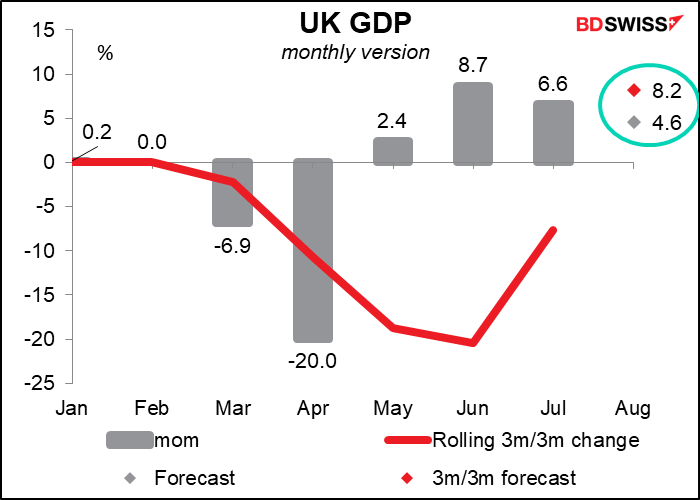 Industrial and manufacturing production are both expected to rise, but at a slower pace than in the previous month. This goes along with the slower pace of GDP growth. All told, signs that the recovery spurt has played out and the rate of growth is falling back to a more normal range. 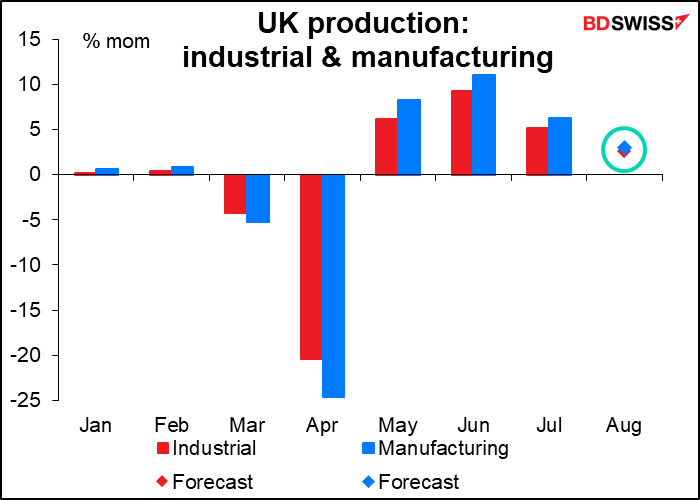 Unfortunately while growth is falling back to a more normal pace, it’s left the level of output well below where it used to be. Growth at the rate forecast by the market would leave industrial and manufacturing production 4.4% and 5.6% below their pre-pandemic level, respectively. 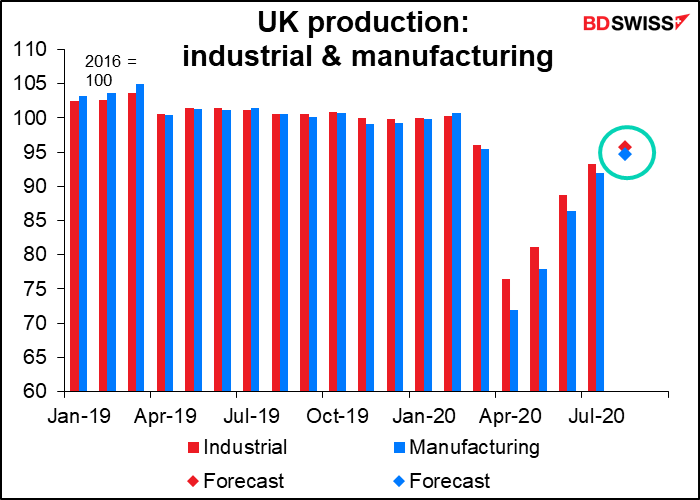 Meanwhile, the visible trade trade deficit is expected to widen and the overall trade balance is expected to…balance. This is down from the surplus that we’ve seen for the last four months (seven out of the last 9). 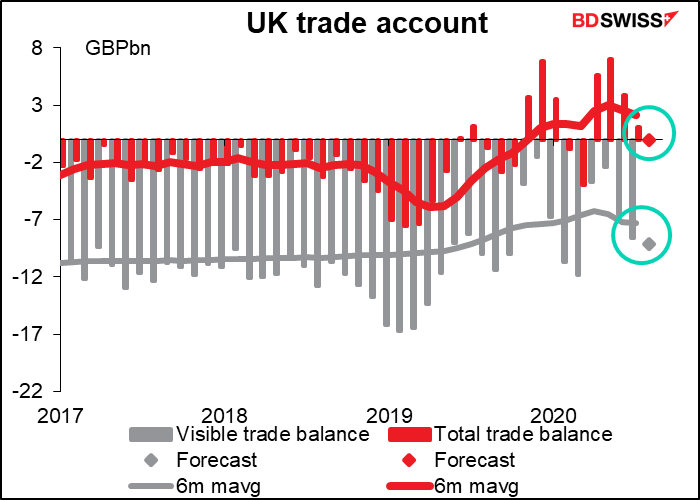 We don’t have any forecasts for imports and exports, but my guess is that economists are forecasting a wider deficit because as UK consumer demand picks up, imports are once again expected to exceed exports, as was the usual state of affairs for some time. This puts Britain in a dangerous situation as it will have to fund this trade deficit – likely to blow up come Brexit, IMHO – while the Bank of England mulls instituting negative rates. How they can attract the capital inflows to finance this deficit will be the story of the pound in 2021. 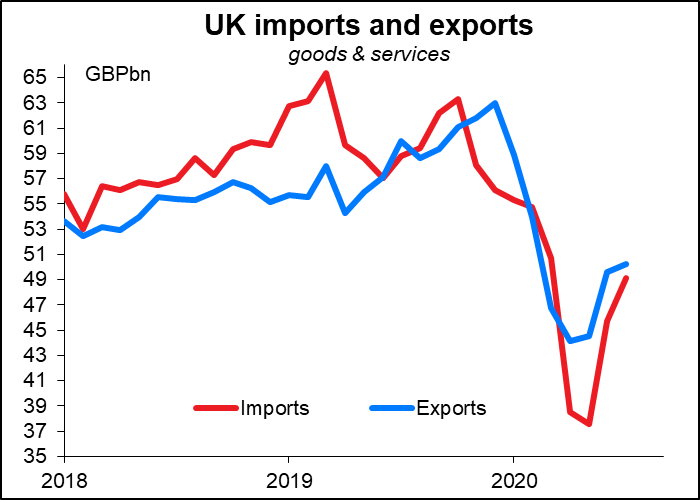 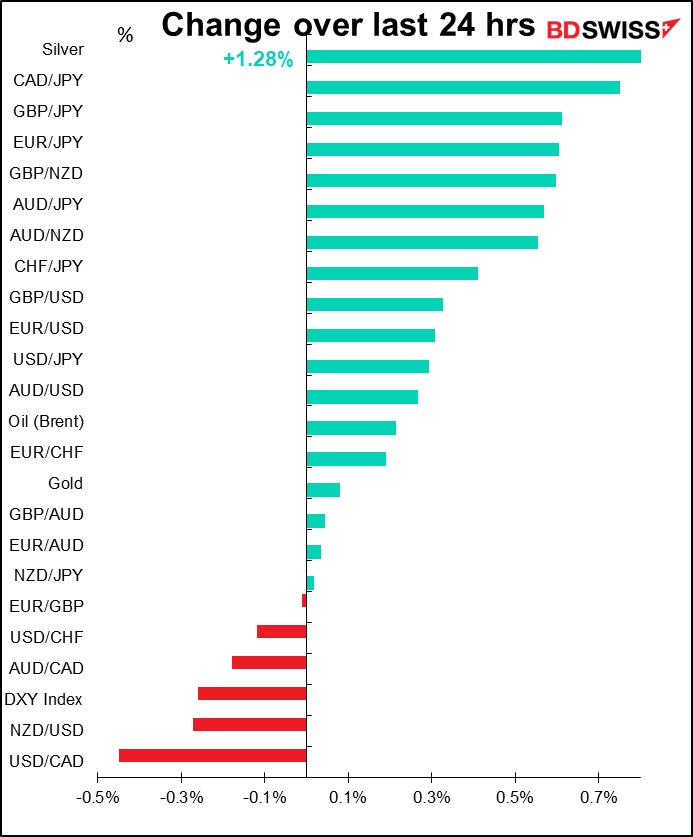