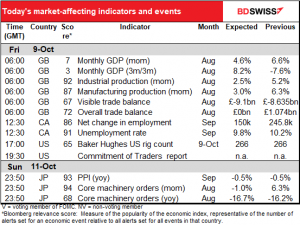 Speaker of the House Nancy Pelosi has had enough. After Trump’s recent unhinged performances – including 40 tweets in two hours, an ALL-CAPS TWEETSTORM, a one-hour rant on Fox Business News that clearly horrified the announcer, and the craziest video I’ve ever seen, a nonsensical pitch to senior citizens* — she’s decided to launch the Nuclear Option: the 25th Amendment to the US constitution, which details what happens when the president is incapacitated. Specifically, Section 4 gives Congress the right to declare the president incompetent:

The key phrase here is “other such body as Congress may by law provide.” Accordingly, Speaker Pelosi plans to introduce legislation Friday that would create a “Commission on Presidential Capacity.” “The president is, shall we say, in an altered state right now,” Pelosi said on Bloomberg TV. “I don’t know how to answer for that behavior.” While the move is political theater that has zero chance of ousting Trump, it will force the Republicans to stand up and be counted, which could be politically damaging and garner a lot of free press for the Democrats in the run-up to the election.

Plus of course it will call attention to Trump’s unhinged behavior, which should help VP Biden. One of the oddities of the US press is that while Trump constantly attacks the “fake press,” the most fake aspect of the US press is that it persists with the fiction that Trump is a normal person who just has some personality quirks. To the best of my knowledge, none of the mainstream media has ever run a story questioning Trump’s obvious neurological condition, his drug use, or his fitness for the presidency, mental or physical. On the contrary, some reporters have even picked up Trump’s calumny about Biden’s mental condition and written about that.

If you see a picture of him nowadays, notice how puffed up the right side of his face is. Rumor is that he’s been falling recently – balance problems, indicative perhaps of a stroke. And watch how his right leg swings when he walks – another after-affect of a stroke.

*“I’m a senior. I know you don’t know that, Nobody knows that.” (he’s 74 years old — I think most people know that).. “We’re taking care of our seniors. You’re not vulnerable but they like to say you’re vulnerable, but you’re the least vulnerable but for this one thing, you are vulnerable. So am I.” Etc. (Note that it was done in front of a green screen – if you watch the trees in the background you can see the loop restart.)

Market Recap
A generally “risk-on” day, with the commodity currencies up and USD down. Risk sentiment was supported by some bizarre comments by Trump in the above-mentioned Fox Business News rant as saying the stimulus talks are “starting to be productive,” and that there was a good chance a deal would be reached – this after he ordered the stimulus talks to stop. In the event Pelosi said there would be no “skinny” bill addressing just a few issues and that she would only pass a larger bill with broad aid – “there is no standalone bill without a bigger bill,” she said.

But the market seems willing to buy any rumors at this point, especially when a “blue sweep” of Congress and the White House seems likely. Even Goldman Sachs said this week that they would upgrade their GDP forecast for the US if the Democrats win Congress and the White House, which seems increasingly likely. The well-respected statistical website fivethrityeight.com gives Biden a 9.8-points lead in the polls and a 68% chance of winning control of the Senate.

There’s been a noticeable decline in implied volatility around the election date, which suggests that the market is getting more confident of the outcome and that it’s satisfied with the likely result. 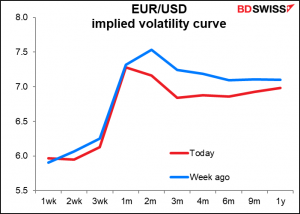 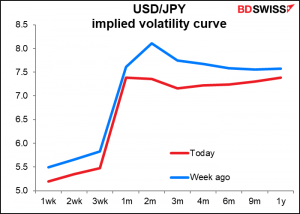 The same is not true with regards to GBP however as that’s got an entirely different risk profile based on the Brexit schedule. 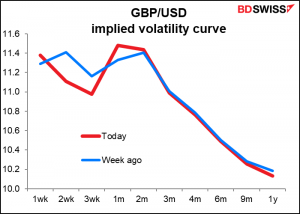 It will be interesting to see how far this can go –the risk presented by mail-in ballots and Trump’s threats not to accept the results if he loses means the market will have to continue to price in some volatility around and after the election, unless there’s a definitive win on 3 November. For that, watch the polls for Florida – it’s probably impossible for Trump to win if he doesn’t win Florida. It’s also a state where they count the mail-in ballots as they arrive, not beginning when the polls close, so we should have a definitive result there fairly early. 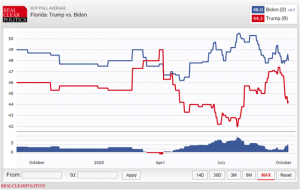 Oil rose on a report in the Wall Street Journal that Saudi Arabia is considering canceling plans for OPEC+ to raise production by 2mn b/d in January. Saudi oil advisors argue that with demand depressed by a resurgence in virus cases worldwide and Libyan oil production coming back online after an agreement between rebel factions ended an eight-month shutdown, “The market can’t take another two million barrels a day,” one advisor said. The next regularly scheduled OPEC+ meeting is 30 Nov/1 Dec and there are currently no plans to have an “emergency” meeting, so we have 1½ months to hear lots of rumors and counter-rumors.

CAD was a big beneficiary of the move in oil prices.

It’s short-term indicator day today for Britain! We ran through all of them yesterday and besides, they’re out already. The output figures – GDP, industrial production and manufacturing production – were all much weaker than expected – not good! The overall trade balance was in surplus, which was a positive surprise, but I expect that the near stall in industrial production growth is going to weigh on GBP today. 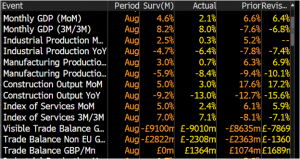 So now we have to wait for the Canadian employment data, which usually comes out at the same time as the US employment data on the first Friday of the month but not this month. The unemployment rate is expected to fall further. 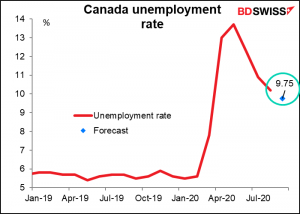 Employment is expected to keep rising, but, like in the US, at a slower pace than it has over the last several months. This seems to be the general pattern around the world. Is the recovery running out of steam? Furthermore, some provincial governments reintroduced social distancing measures in October, so this data (for September) may not tell us much about the future trend – October is likely to show an even smaller increase in jobs or perhaps a fall in jobs and a rise in the unemployment rate. So probably people will just ignore the September data. 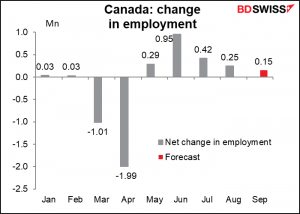 Then Monday morning as the week starts in Asia, Japan announces its machinery orders. They’re expected to be lower than the previous month, which would make sense after last month’s sharp rise. 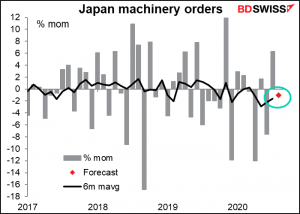 Although the market looks mostly at the mom change, I think the yoy change is more informative at this point. It’s expected to show no real recovery in orders yet – a disappointing outturn. 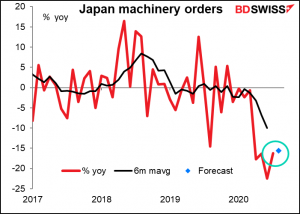