You are at:Home»MARKET PREVIEW»“Risk-off” Sentiment this Morning on fears of “Blue Tide;” Ifo Index 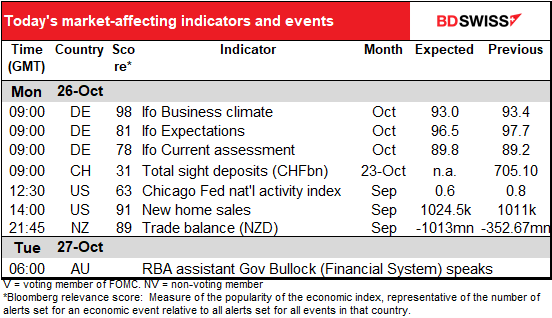 New virus cases hit a record high in both the US and Europe. In Europe, Italy and Spain announced sweeping new measures to deal with the pandemic. On the other hand, in the US, White House Chief of Staff Mark Meadows said, “We’re not going to control the pandemic, we are going to control the fact that we get vaccines, therapeutics and other mitigations.” 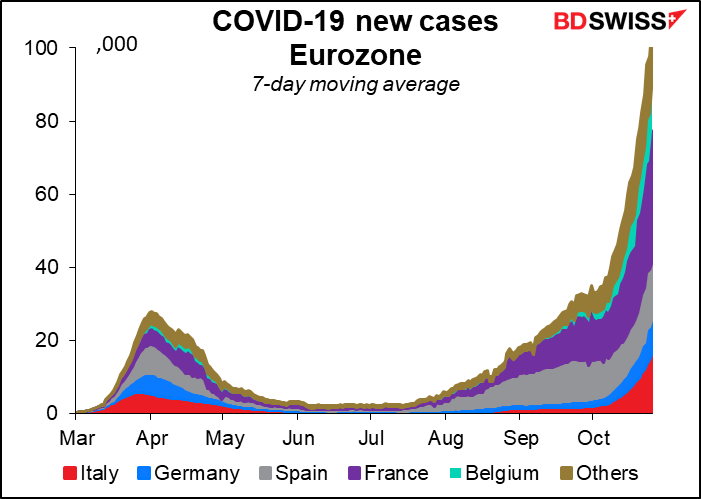 In the US, it’s pretty much an equal Republican-Democratic problem. 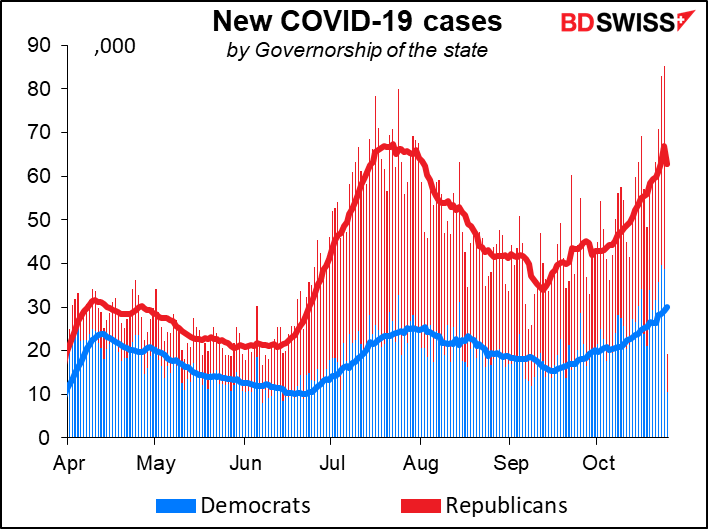 The virus count used to be a driving force in the FX market, but no longer. I think people are thinking more about the US elections now. Perhaps market participants have come to accept the virus in their outlook, much like many people have come to accept it in their day-to-day life. 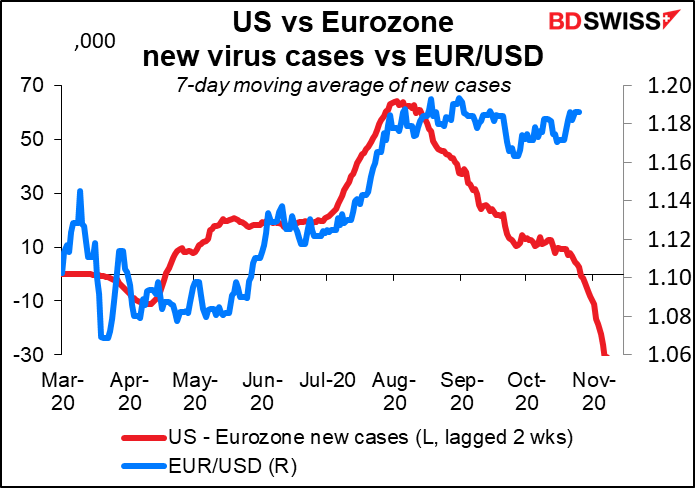 But despite what Meadows said please don’t think the US has no plans to deal with the pandemic. It did have one unique plan, but unfortunately it got scrapped. From The Wall Street Journal:

A federal health agency halted a public-service coronavirus advertising campaign funded by $250 million in taxpayer money after it offered a special vaccine deal to an unusual set of essential workers: Santa Claus performers.

As part of the plan, a top Trump administration official wanted the Santa performers to promote the benefits of a Covid-19 vaccination and, in exchange, offered them early vaccine access ahead of the general public, according to audio recordings.

You’ll be relieved to know, I’m sure, that “Those who perform as Mrs. Claus and elves also would have been included.”

In 2009 Alan Grayson, a former Congressman from Florida, summed up the Republican health care plan as: a) don’t get sick, and b) if you do get sick, die quickly. That seems to be the case still.

As long as we’re on this subject, USA Today had a story showing that virus cases rose significantly in several areas following Trump’s rallies. TV anchor Rachel Maddow called him “the Johnny Appleseed of COVID-19,” comparing him to a person in early US history who went around the country planting apple trees. I don’t think that’s a good analogy, because Mr. Appleseed’s activities were benign. I prefer to think of him as the Jim Jones of US politics, killing off his supporters. Now five aides to VP Pence, who chairs the White House’s coronavirus task force, have tested positive. Let that sink in:  people who work with the head of the committee tasked with dealing with the pandemic have caught it themselves.

By the way, please take a look at this little snippet from the debate and see how Trump’s eyes light up when Biden mentions “cocaine.”

There are various explanations: the surge in virus cases is probably weighing on sentiment, as is the lack of progress on a US fiscal stimulus package (the Sunday news programs revealed nothing but accusations from both sides). There was also talk that the mood was dampened by a temporary dip in the odds on predictit.org of a “blue sweep” in which the Democrats win the White House, Senate, and the House of Representatives. At one point the odds dropped to 48. However they’ve since recovered to 53. 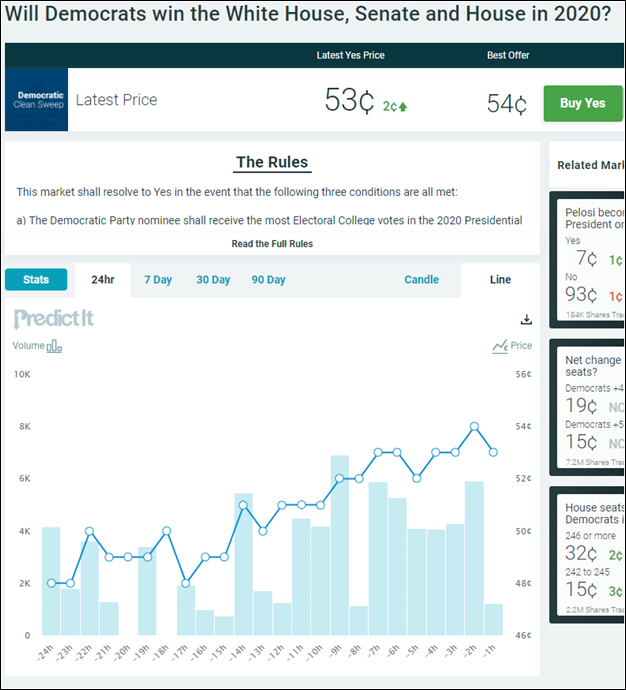 The highest the odds have been is 62. 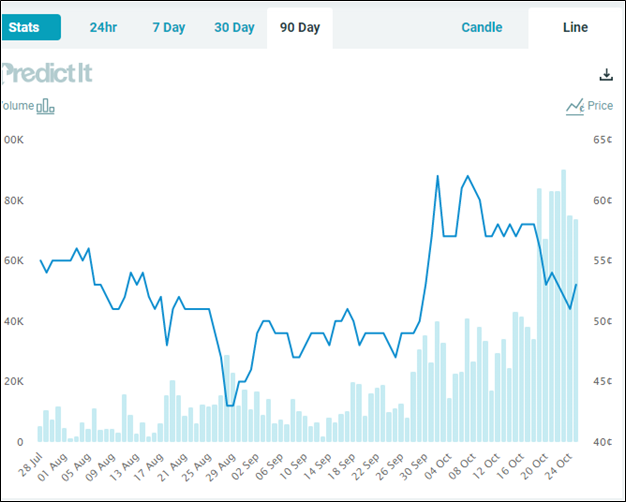 A “blue sweep” that sees the Democrats getting the White House, House of Representatives, and the Senate would enable the Democrats to implement their program without much trouble (except of course the usual internal politics in a party that’s a diverse coalition of different interests). However, if there’s only a “blue tide” and the Republicans retain control of the Senate, then we’re certain to see even worse gridlock than we’re seeing today as the Republicans have previously shown that they are willing to sabotage the US economy simply to ensure that they get back into power. Thus it’s definitely “risk-off” if it looks like the Republicans might take the Senate.

Mind you, the Predictit.org site is just one source of wisdom. Other sources say differently. The Iowa Electronic Markets gives a price of 59 for a “blue sweep,” above what Predictit.org has. 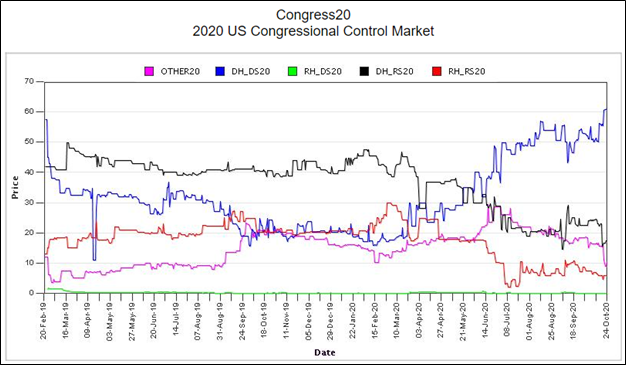 Electionbettingodds.com gives a 58% chance of the Democrats taking control of the Senate.

Just to show you how radically different this election is from previous ones, the poll analysis site fivethirtyeight.com this morning said that Biden was leading Trump in Texas, of all places. OK a tiny lead, 47.6% to 47.5%, well within the margin of error, but it’s still pretty amazing for a state that hasn’t voted for a Democratic president since 1976 (and that was Jimmy Carter, a Southerner). 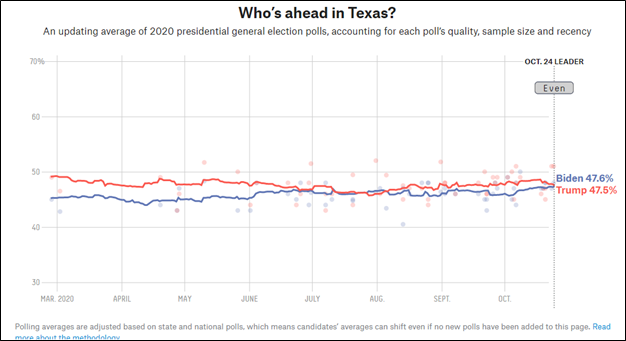 Even Putin seems to be giving up on Trump – in an interview, he rejected Trump’s criticism of Biden’s family business.

We’ll be discussing the outlook for the election and the markets tomorrow in a webinar – please register here ( “Mastermind Webinar Market Outlook Q4.”)

More than 200 German banks have introduced negative interest rates on retail deposits, some starting from €1. There are approximately €2.5tn in retail deposits in Germany. Are people going to pull this money out of the bank? If so, what might they do with it? They’re not going to put it in the bond market – rates are negative there, too. Stocks? I don’t think people consider stocks to be an alternative to bank deposits. What they found in Japan was that people simply take their money out of the bank and keep it under their bed. That would be a disaster as it would cause the banking system to collapse. I think this move by German banks makes it less likely that the European Central Bank will cut interest rates further into negative territory. If they want to ease more, they’re more likely to increase their quantitative easing measures, i.e. to buy more bonds. That would probably be negative for the euro. That’s probably not going to happen this week though, but rather in December, in my view. 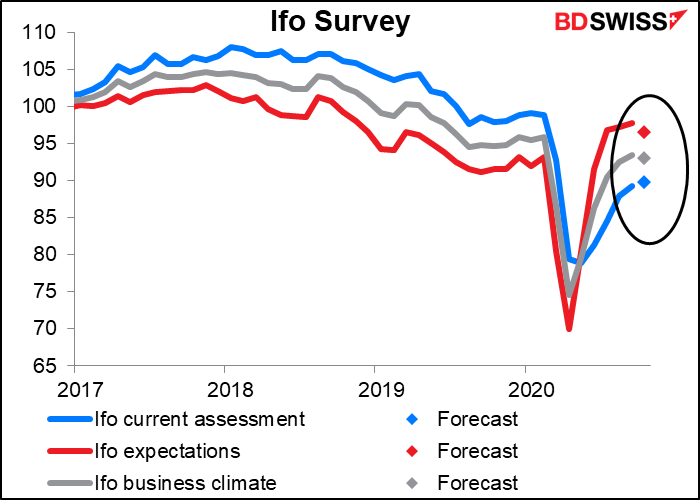 The slight fall in the Ifo business climate index, the overall index, contrasts with the rebound in the composite purchasing managers’ index (PMI) for the month. That’s a negative after the better-than-expected PMIs on Friday. 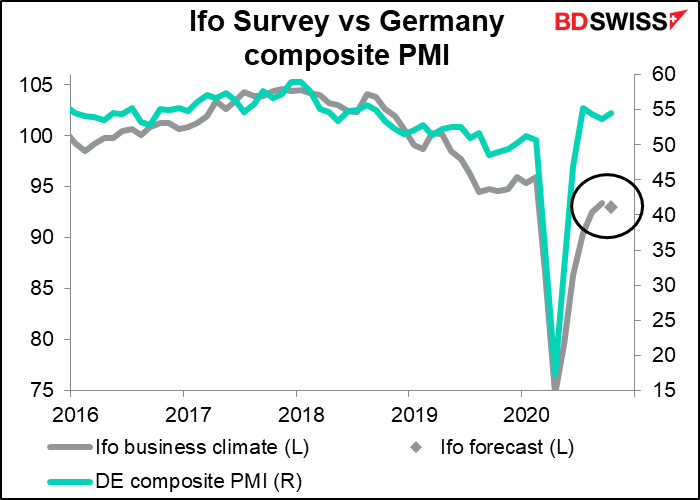 The Swiss National Bank (SNB) seems to have cut back its intervention noticeably. Is that because it’s worried about what the US might do or say about its activities? We can’t know while EUR/CHF is moving higher anyway. 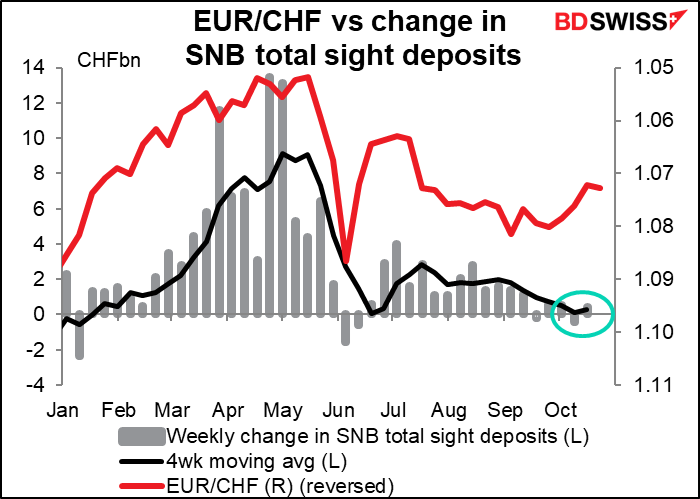 The Chicago Fed national activity index (CFNAI) is starting to return to its usual range. As you can see, the April plunge was 29 standard deviations away from the average, while the June reading was 9 standard deviations above average. Finally, the forecast for September is within the normal range for this indicator. 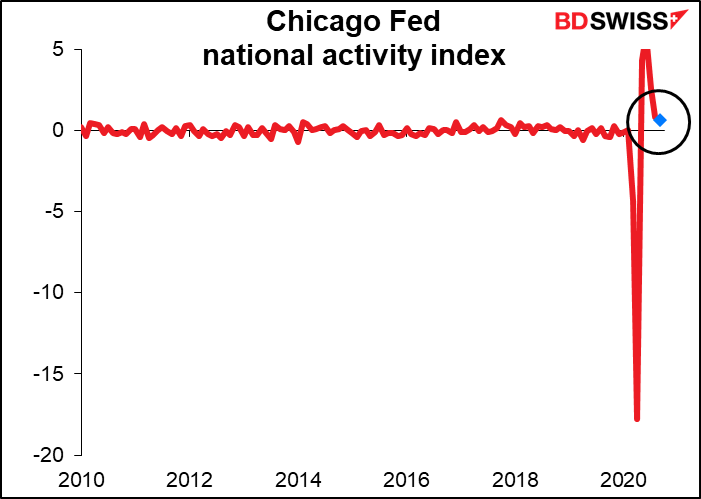 The CFNAI seems to have bounced back faster than the other Fed indices, but perhaps they’re not comparable due to the different units. The CFNAI uses many previously released indicators to gauge overall economic activity and related inflationary pressure on a national basis. A positive number corresponds to growth above trend and a negative number, below trend. 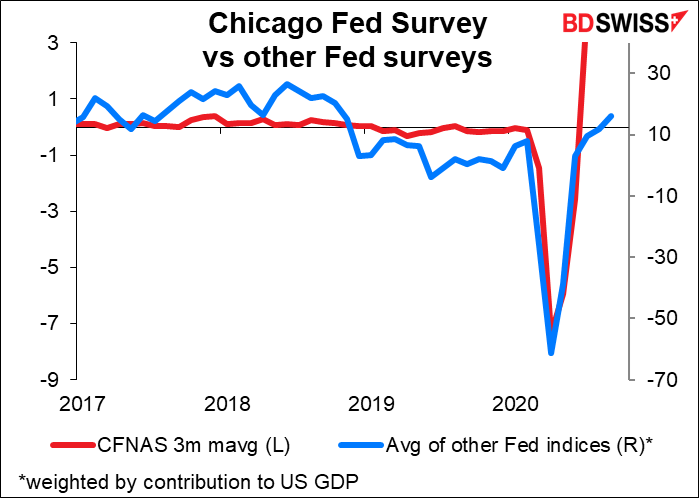 US new home sales are expected to be up 1.3% mom. I think there’s a good chance that the figure beats estimates, because existing home sales for the month were up 9.4% mom. The main constraint here might be if there simply aren’t enough new homes to sell. After that, it’s all quiet until the Asian day starts up and New Zealand announces its trade data. The forecast is for a much wider trade deficit, but remember that the figures aren’t seasonally adjusted, whereas New Zealand’s exhibits a strong seasonal pattern, as befits a country whose exports are 62% edible. Looking at the 12-month moving average, the country not only has a trade surplus but that surplus would rise based on today’s forecast. This leads me to think the figure is NZD-positive. 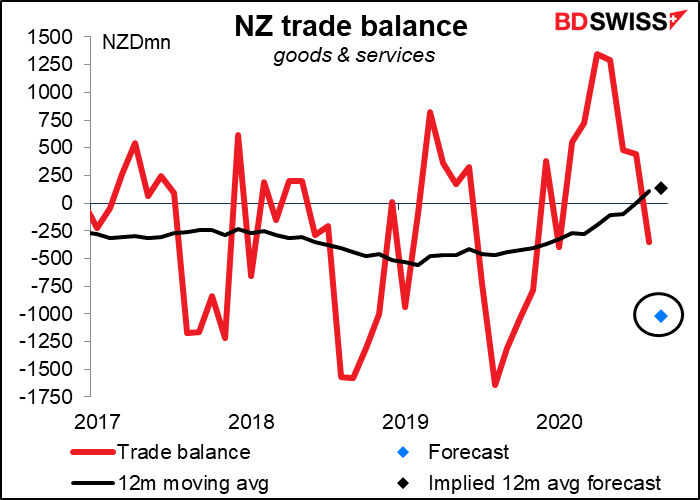 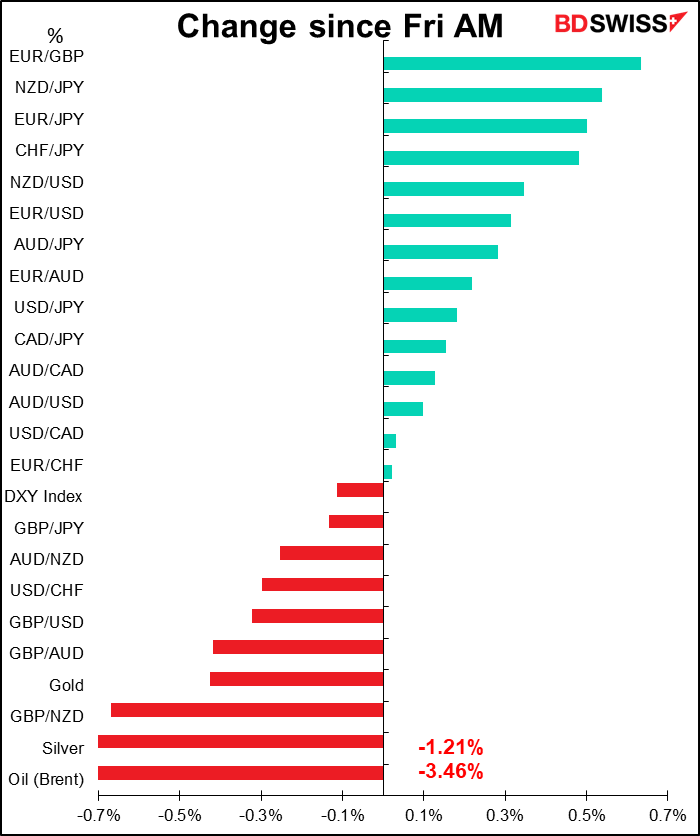