The schedule next week is relatively quiet. The big feature will be the Fed’s annual get-together at the resort of Jackson Hole, Wyoming.

As it says on the Kansas City Fed’s website,

The Federal Reserve Bank of Kansas City hosts dozens of central bankers, policymakers, academics and economists from around the world at its annual economic policy symposium in Jackson Hole, Wyo. Symposium participants include prominent central bankers, finance ministers, academics, and financial market participants from around the world. The participants convene to discuss the economic issues, implications, and policy options pertaining to the symposium topic. The symposium proceedings include papers, commentary, and discussion.

For example, the difference in the unemployment rate between those with less than a high school diploma and those with a BA or higher is currently 6.4 percentage points (down from 6.7 points in June) (9.5% vs 3.1%, respectively). It hasn’t been this high for a sustained period since 2014, when of course the economy was still recovering from the Global Financial Crisis of 2008. 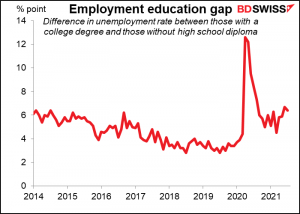 Similarly, the unemployment rate for Blacks worsened more than that for Whites and has yet to recover to where it was before the pandemic. 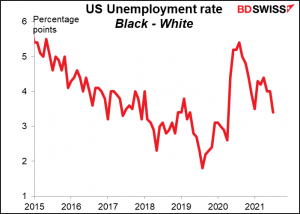 The Kansas City Fed started this annual tradition in 1978, when the symposium focused on agricultural issues. It moved to Jackson Hole in 1982. The story goes that then-Fed Chair, Paul Volcker, was an avid fly fisherman and they thought they could get him to attend if they held it somewhere with good fishing. They were right – he did indeed show up. Unfortunately for Mr. Volcker, although the official topic of the symposium was “Monetary Policy Issues in the 1980s,” the underlying topic was, “Is Volcker Killing the Economy?”. Nonetheless, the lively debate at that meeting established this annual symposium as a major event in the central bankers’ calendar. (If you’re interested I the history of the symposium, the Kansas City Fed has a 60 some-odd page brochure about it.)

We don’t yet know who will be attending, who will be presenting papers, etc. We do know though that Chair Powell will be talking at 1400 GMT Friday on “The Economic Outlook.” It’s relatively rare for the Fed Chair to make a speech – I looked through several years’ worth and didn’t find any or even any participation in panel discussions. Usually they just make some welcoming remarks at the opening (I didn’t look through all of the years, I admit). So this is probably going to be an important speech. You can watch it live on the Kansas City Fed’s YouTube channel.

The options markets are saying however that we’re not likely to get anything major from him. Looking at 1-, 2- and 3-week puts on the S&P 500, we should’ve seen a price jump in the 3-week put around Aug. 9th and a similar jump in the 2-week put around the 16th, but we’ve seen no unusual movement or change in relative prices of these options.

We can see a small change in the options on Treasury bond futures, but nothing major.

And in the FX market, the risk reversals aren’t showing any great fear of a big move either.

So you’ll have to pay attention to it, the speeches will be occupying a lot of air time on Friday ad especially on Saturday. The main event is usually the lunchtime lecture, which is often by another central bank governor (Bank of England’s Carney in 2019 and the European Central Bank’s Draghi in 2017) or some esteemed professor. This will be separate from Powell’s speech, which is too early for lunchtime. The full agenda will probably be available next Thursday.

Otherwise, there are no central meetings during the week, indeed precious few central bank speakers either. The ECB publishes the minutes of its July 21-22 meeting on Thursday. That could be interesting as it was the first meeting following their Strategy Review. There could be some interesting discussion of how to implement that concretely.

Aside from the Jackson Hole event, there’s not that much on the schedule. It’s a good week for me to take off and learn how to scuba dive, a childhood dream of mine.

The main indicator will be the preliminary purchasing managers’ indices (PMIs) for the big industrial economies on Monday. Looking at them so far, the service-sector PMIs are mostly in the “accelerating expansion” quadrant, while the manufacturing PMIs (which recovered earlier) are also deeply in expansionary territory but not expanding so much. The outlier is Japan, where the manufacturing PMI is barely expanding (relatively speaking) and the service-sector PMI is still in contractionary territory. 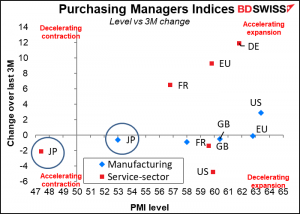 The forecasts this month are for most of the PMIs to decline. That’s normal as they trend toward the 50 level over time – demand doesn’t keep going up indefinitely. Manufacturing came out of recession first and is generally higher than services, so it’s naturally expected to fall by more. Still, they’re all expected to remain deep into expansionary territory. That might help to calm the recent fears about global growth – maybe. (Japan also releases its PMIs, but it isn’t included in the table because there aren’t any forecasts.) 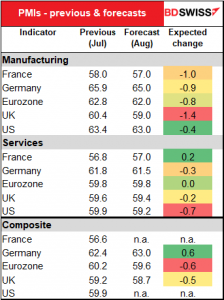 US durable goods orders on Wednesday are expected to be down slightly, but this is probably due to something going on with Boeing. 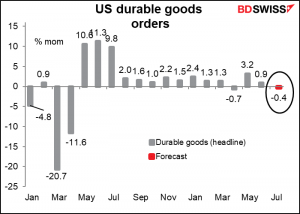 Forecasts for orders excluding transportation equipment are expected to be up slightly. 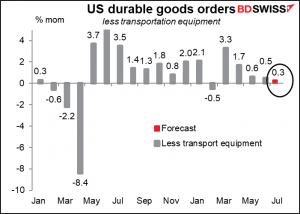 In any event, even the headline forecast works out to 11.7% above the pre-pandemic level, so it’s clear that orders are still rolling in as companies gear up to adjust to the improved economic conditions. 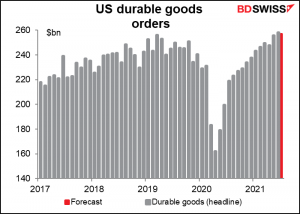 Friday’s US personal consumption expenditure (PCE) deflator and its sub-index, the core PCE deflator, are key indicators for monetary policy even though the market doesn’t accord them that much respect. The PCE deflators, not the consumer price index, are the Fed’s preferred inflation gauges. They made the switch as far back as the Fed’s Humphrey Hawkins report of February 2000, but still the market focuses more on the consumer price index.

The FOMC stated back in January 2012 that the PCE deflator was “most consistent over the longer run with the Federal Reserve’s statutory mandate.” They didn’t spell out that they focus on the core PCE deflator, but it’s widely assumed because of various hints they’ve dropped over the years. For example, in the February 2020 Monetary Policy Report to Congress, they said that the core PCE deflator “historically has been a better indicator of where inflation will be in the future than the overall figure.” The things to watch here are how the mom rate of change of the PCE deflator and the yoy rate of change of the core deflator come in relative to estimates. The core deflator is more important, but as it doesn’t change very much, the market usually gets it right. In that case, attention will focus on the overall measure and any deviation from expectations there.

Both the headline and the core figure are expected to be higher by one tick (0.10 percentage point). This is in contrast to the CPI for July, which was unchanged at 5.4% and the core CPI, which fell to 4.3% yoy from 4.5%. 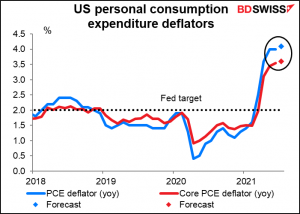 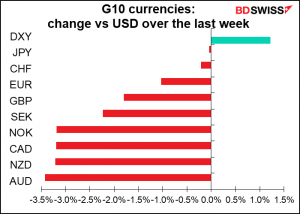