You are at:Home»MARKET PREVIEW»RBNZ Shocks Market with Forecast of Rise in OCR; not much on the schedule

Boy was I wrong about the Reserve Bank of New Zealand! Not necessarily about what they would decide, but about the impact on the market. As expected they kept all their policy settings intact and even their forecasts were little changed – they said “Overall, our medium-term outlook for growth remains similar to the scenario presented in the February Statement.”

However, there were two small changes that made a world of difference.

One, in the last paragraph, the one with the forward guidance, they dropped the sentence that read, “The Committee agreed that it was prepared to lower the OCR if required.” (OCR = official cash rate, the RBNZ’s policy rate) This was perhaps in line with their assessment that “Confidence in the outlook is rising as the more extreme negative health scenarios wane given the vaccination progress globally.”

Secondly, the Monetary Policy Statement (MPS) reinstated their “long-standing practice of publishing an OCR projection.” Since May 2020 they had been publishing no numerical forecasts but just a graph of an “unconstrained” OCR, which is a theoretical OCR based on what it would be if the OCR could be at any level. The key point is that while in February the graph showed the OCR going negative for a few years before finally returning to zero, now the official forecast is for a rate hike in Q3 next year to 0.5% from the current 0.25%, rising to 1.8% (one assumes 1.75%, but they round it off to one digit) by Q2 2024. 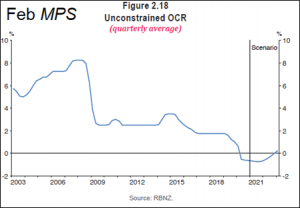 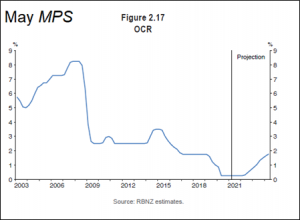 This is of course bullish for NZD. The RBNZ is now the second major central bank, after the Bank of Canada, to talk about removing some accommodation. While NZD/USD leapt higher, I would expect this trend to have legs as asset managers and other slower-to-move investors reassess the outlook for the NZD.

Elsewhere, FX market movements were quite small and not particularly significant.

There’s bizarrely little on the schedule today. The only thing is the weekly US Dept of Energy oil inventory figures, but since the market expectation is pretty close to what the American Petroleum Institute (API) announced overnight, a drawdown of 439,000 barrels, it shouldn’t have much impact on oil prices. 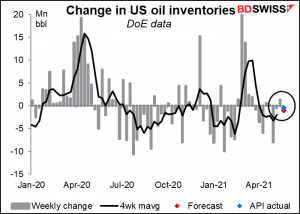 This is depressing for me since I get paid by the word. Maybe I should put in some of my favorite recipes? Tell some jokes?

No. So I’ll just refer you to a recent article you may have missed from Forbes:

Range anxiety, recycling and fast-charging fears could all be consigned to electric-vehicle history with a nanotech-driven Australian battery invention.

The graphene aluminum-ion battery cells from the Brisbane-based Graphene Manufacturing Group (GMG) are claimed to charge up to 60 times faster than the best lithium-ion cells and hold three times the energy of the best aluminum-based cells.
This could be a real game-changer. A better, safer, cheaper battery would not only solve a lot of problems for electric cars but also for solar energy too, making it much cheaper to store sunlight energy for nighttime. Batteries are a key technology. Plus, this is the first good use of graphene I’ve ever seen (although there may well be other uses that I’m just not aware of).

This has nothing to do with FX of course, but I still think it’s interesting. 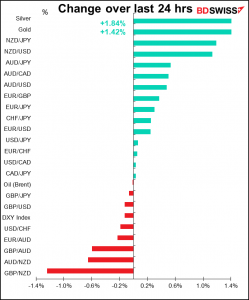