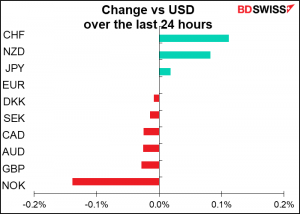 My Excel crashed yesterday before I saved the tables and so I only have the above table, which is from Bloomberg. Unfortunately, when they calculate the change from the previous day I’m pretty sure that they use the close of the previous day, not 24 hours before. This results in exceptionally small changes (because we’re only talking about eight hours or so of trading) and does not reflect the bulk of the movement of the day. My apologies.

Unusually, CHF was at the top of the list not because of any “risk-off” mood – in fact, stocks were generally higher – but rather because of developments in Switzerland. The government announced that it will not sign the draft EU-Swiss Institutional Framework Agreement that was reached in 2018, bringing to a close seven years of negotiations. According to the Swiss government, the institutional agreement was intended to safeguard Switzerland’s access to the European single market and to provide a basis for expanding that access by introducing the dynamic adoption of developments in EU law. However, there were several points of disagreement, most notably the EU’s Citizens’ Rights Directive (CRD), wage protection, and state aid.

Without the agreement, EU-Swiss relations will continue to be governed by around 120 bilateral accords. However the EU has previously stated that if this agreement isn’t signed, these bilateral accords may not be renewed. That would throw into question Switzerland’s trade relationship with the EU, which takes 39% of Switzerland’s exports and is the source of 50% of its imports (we’re talking the EU here, not the Eurozone).

It’s curious then that CHF gained vs EUR (red line) while falling vs a generally stronger USD (blue line). Why would CHF gain when its main trading relationship is at risk? There may have been some modest debate about whether Brexit would hurt the EU or the UK more, but there can’t be any such debate about tiny Switzerland, which accounts for only 2.8% of EU exports and 2.5% of EU imports.

It may have been due more to EUR weakness than to CHF strength – CHF/JPY for example was little changed on the day. After all, the dispute has been running for seven years now and it was known that Switzerland wasn’t happy about the outcome. 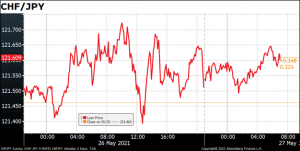 So why the EUR weakness? European Central Bank (ECB) Governing Council member Panetta noted in an interview that he sees no justification for the central bank to slow the pace of bond purchases in its Pandemic Emergency Purchase Program (PEPP) at its next meeting on June 10th. “Only a sustained increase in inflationary pressures…could justify a reduction in our purchases,” Panetta said. “But this is not what we projected in March. And, since then, I have not seen changes in financing conditions or the economic outlook that would shift the inflation path upward.”

In contrast, Vice Chair Quarles yesterday added his support to the “let’s start thinking” side. “If my expectations about economic growth, employment, and inflation over the coming months are borne out . . . and especially if they come in stronger than I expect . . . it will become important for the [FOMC] to begin discussing our plans to adjust the pace of asset purchases at upcoming meetings,” Quarles said. “In particular, we may need additional public communications about the conditions that constitute substantial further progress since December toward our broad and inclusive definition of maximum employment,” he added. The latter comment is particularly important as up to now they’ve left it purposely vague as to what might constitute “substantial further progress.” Spelling this out would allow the market to understand their thinking and forecast Fed moves more accurately.

So, while the Bank of Canada is tapering its bond purchases and the Fed is “thinking about thinking about” tapering its purchases, no such movement is apparent at the ECB. Monetary policy diversion could lead again to a lower EUR/USD. 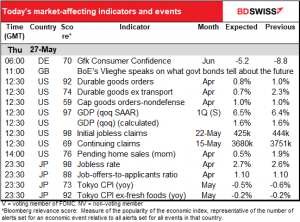 Not much of interest during the European day.

Once the US wakes up, we get bombarded with US indicators all at the same time.

US durable goods orders are expected to be up yet again, although somewhat less than in recent months. These figures are particularly important now that people are worried about “demand-pull” inflation. More investment means more production capacity means less inflationary pressure caused by shortages. The figure should point to continued expansion of production capacity, which would probably be a “risk-on” factor. 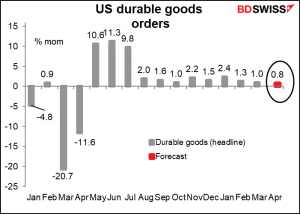 The final estimate of US Q1 GDP is of only historical interest now that we’re almost 2/3rds of the way through Q2.

So that brings us to the dreaded initial US jobless claims. Actually, I should now call them the celebrated jobless claims, because they’ve been falling quite a lot recently and helping to boost investor sentiment. Notice hos the red line, the actual figure, is below the black line, the 4-week moving average, indicating an accelerating decline. In fact, the red line last week was outside the one-standard-deviation range. 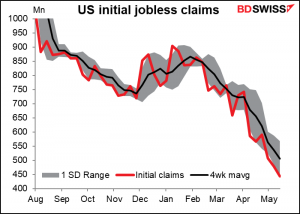 The market is looking for a modest decline of 19k, which would be a bit less than the four-week average of -31k. 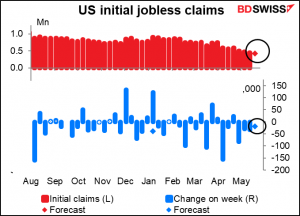 Then overnight there are two major indicators out of Japan. As usual there is some question whether any indicator in Japan is a major indicator for the FX market nowadays, since neither Japanese government bond yields nor the FX market react very much to fundamental news. But even if there isn’t a direct impact at the time of the announcement, I think it’s news like this that has been behind the recent net short position of speculators in the US futures markets. 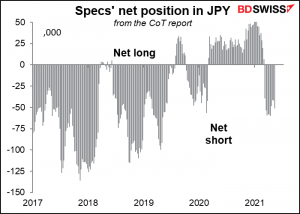 Tokyo CPI is expected to be little changed. Both the headline figure and core CPI remain in deflation. Japan bucks the world trend yet again, thanks to cuts in mobile phone charges. 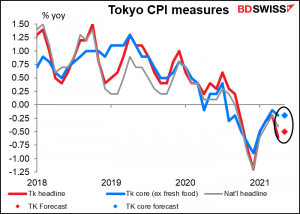 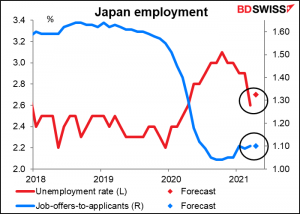