You are at:Home»MARKET PREVIEW»Commodity Currencies Up, Safe Havens Down in “Risk-On” Market; RBNZ Meeting

A generally “risk-on” day as fears about inflation subside somewhat and investors calm down about potential Fed tightening, at least by the end of 2022. The S&P 500 rose 1.0% and is once again approaching the record high est earlier in the month. Tech stocks did even better, with the NASDAQ up 1.4% and the FANG+ stocks up 2.3%. 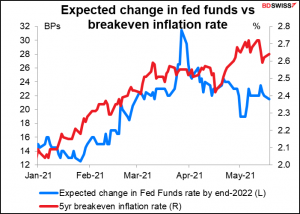 Commodities mostly moved higher. Although investors are still worried about China’s attempts to talk down commodity prices, that’s being overshadowed by expectations of increasing demand as global economies get back to normal. 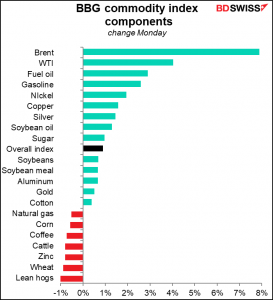 Even prices of cryptocurrencies rebounded somewhat, with Bitcoin up about 16%. 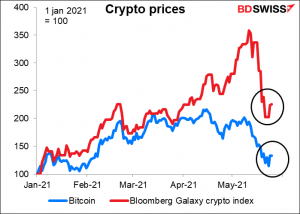 Behind much of the improved sentiment is continuing good news about the pandemic. I mentioned yesterday how new cases are declining in the developed economies. Fortunately, we’re seeing the same trend in the rest of the world, too. Even hard-hit India (grey section) has seen some improvement. 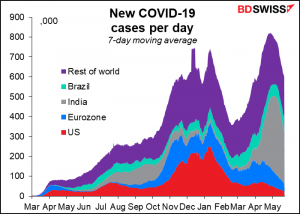 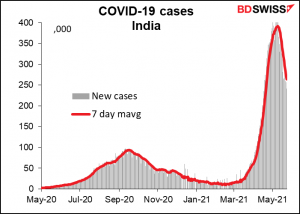 In this context, it was natural that the commodity currencies were up and the safe-haven USD, CHF and JPY were down. And when USD is down, usually EUR is up – today up on most of the crosses as well as vs USD. So that explains everything.

NZD was the big winner of the day on better-than-expected New Zealand retail sales, released early Monday. The figure was up 2.5% qoq vs expectations of -1.8% qoq. I don’t usually cover this indicator as it has a low Bloomberg relevance score, but evidently I should be watching out for it more. 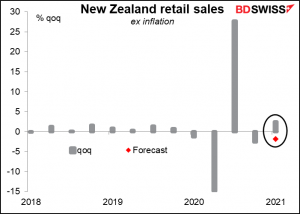 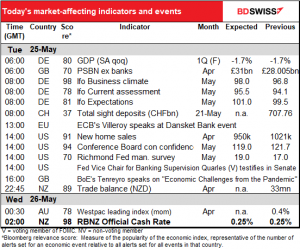 We’ve already had the final estimate of German’s Q1 GDP and the UK public sector borrowing figures. Not so exciting.

The European day starts in earnest with the German Ifo survey. Apparently, everything’s coming up roses in Germany as both the current assessment and expectations indices are expected to rise nearly the same amount, consistent with the rise in the composite purchasing managers’ index for May. EUR+ 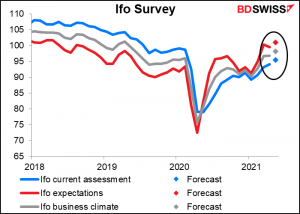 Next, we get the Swiss sight deposits, delayed a day because of yesterday’s holiday in Switzerland. This series has started to be interesting again as EUR/CHF falls and apparently the Swiss National Bank gets a little nervous about it. 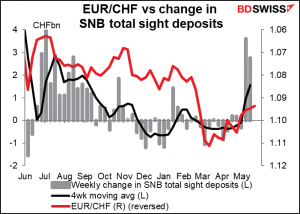 US new home sales are expected to be down 7% mom, compared to the 2.7% fall in existing home sales announced last week. There’s a lot of debate going on about why this is. Many people think it’s because of a lack of inventory – there just aren’t enough houses for sale. Demand seems to be still strong.

The Conference Board consumer confidence index beat estimates last month with a 12.7-points surge, which followed an 18.6-points leap the previous month. This 31.30-point increase was the second-biggest two-month increase in the series (data back to 1974; the record was 32.4 points in April/May 1974.) I don’t think it would surprise anyone to see it fall back a bit, especially since the U of Michigan consumer sentiment index fell. 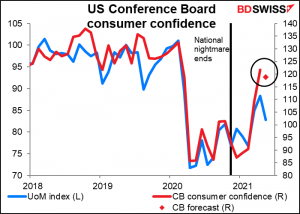 Bloomberg stopped carrying forecasts for the New Zealand trade figures, so this is the last graph I’ll show of it. They said not enough people were forecasting it to make a good estimate. 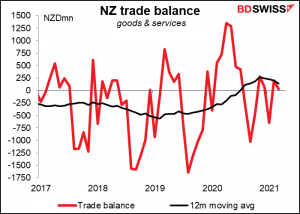 Besides, three hours later we get the Reserve Bank of New Zealand (RBNZ) meeting. As I said in my Weekly Outlook, the RBNZ will also be issuing an updated quarterly Monetary Policy Statement (MPS). I don’t think anyone expects a change in policy at this meeting. The economic outlook has improved, particularly with regard to commodity prices. Inflation is expected to rise above 2% yoy during the year, but that’s expected and shouldn’t cause any alarm. I would expect the MPS to upgrade the outlook slightly but to retain a cautious view and a dovish bias. I don’t expect much market impact.

NZD does often see above-average volatility on RBNZ meeting days, but I wouldn’t expect much tomorrow, unless of course they surprise everyone – but by definition don’t expect a surprise, because if I did, it wouldn’t be a surprise, would it? I guess it could be – I could expect them to do something, but I just don’t have any idea what. But I don’t. 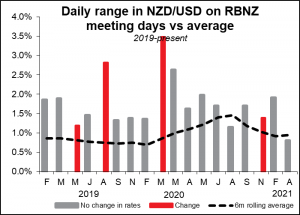 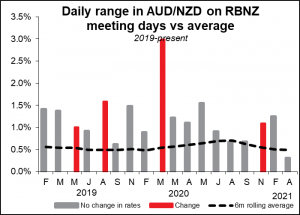 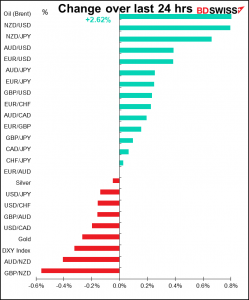