There were significant moves in only three currencies in the latest week. For one, speculators got significantly more bullish EUR. They increased their holdings by 16.5k, the most since August 11th.

On the other hand, speculators flipped to be long GBP for the first time since the week of 22 September Maybe a bit too soon?

The only other significant move in volume terms was in CHF, where they cut their holdings by 4.2k contracts. 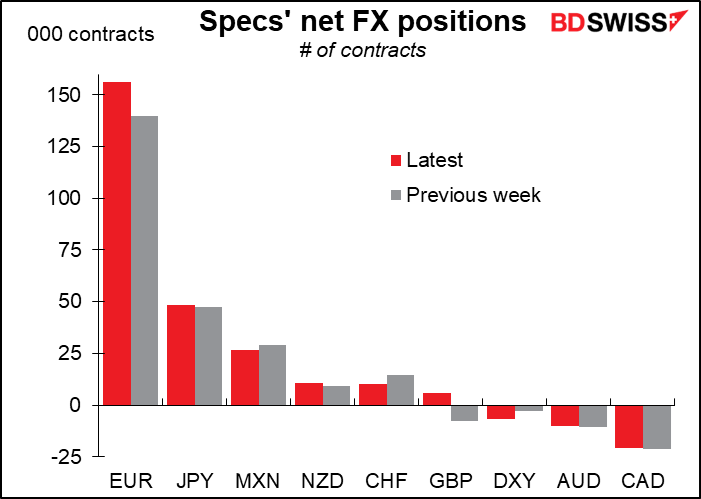 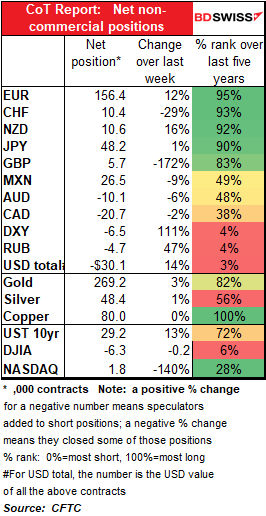 Hedge funds’ largest position continues to be in MXN. They increased their holdings there substantially (22%) over the last week. It’s by no means a NAFTA play as they increased their CAD shorts by 5%. Maybe the idea behind this is that Mexico will benefit more from the departure of the Mango Menace from the White House . 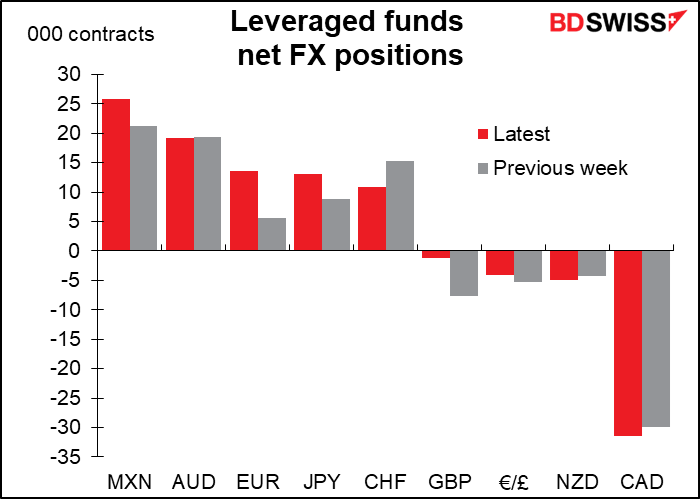 Retail investors, like the professional speculators, added significantly (11%) to their long EUR positions. In fact they added to several of their longs:  CAD (+9%), JPY (+19%), AUD (+9%) and especially CHF (+91%). They also cut their long DXY position, which was already small, down to almost nothing. 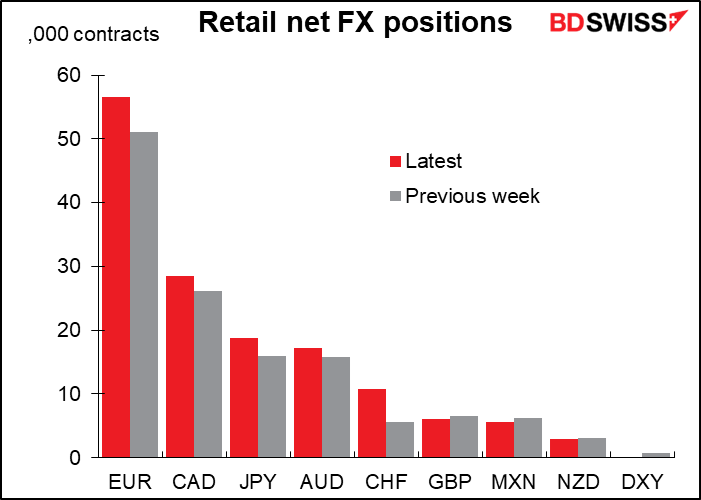 Like last week, the main story with the risk reversals is how the GBP RRs keep getting more expensive. No surprise there as the Brexit talks keep missing deadlines and both sides talk about how far apart they still are, how difficult the talks are, how they want a deal but are preparing for a “no-deal” result, etc. 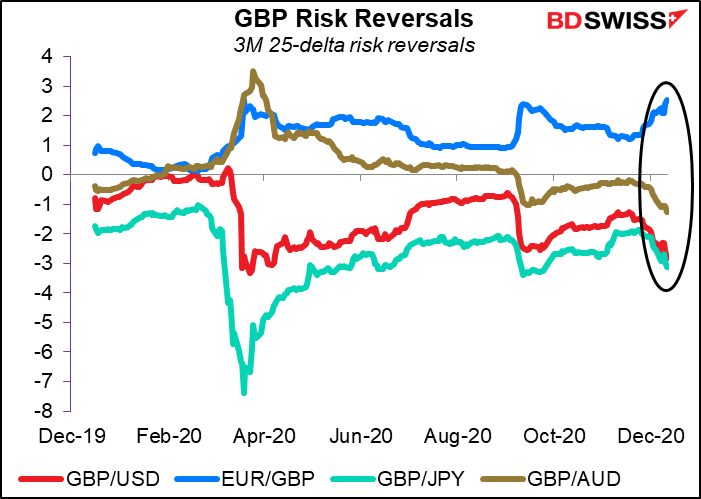 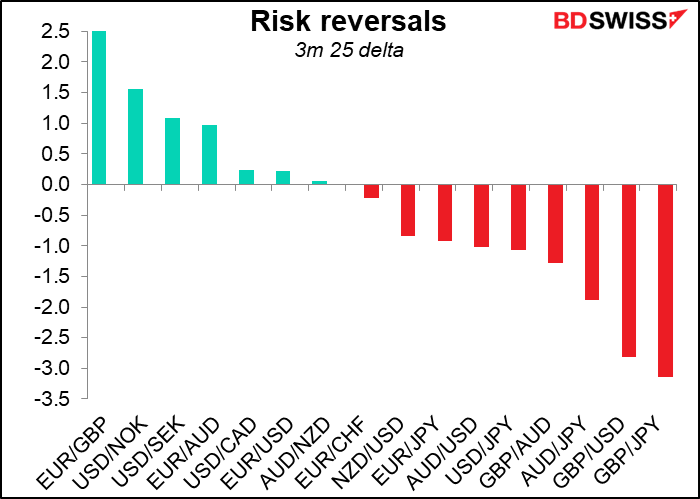 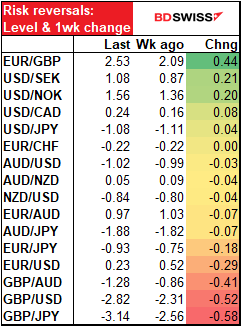 Implied volatility of most currency pairs moved higher, especially GBP pairs. The top four with the largest increases were all GBP pairs.

On the other hand, the only three to see lower implied vol were EUR pairs. This would correspond with the moves in the risk reversal market, where people are getting less bullish on EUR. 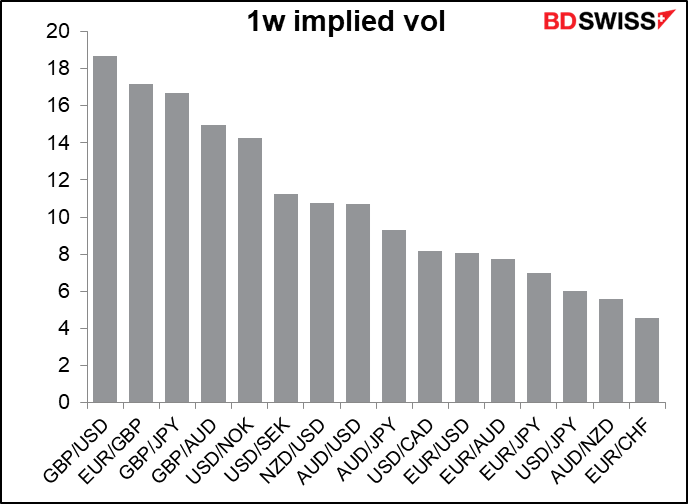 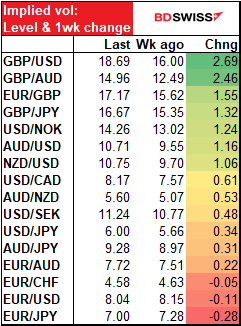 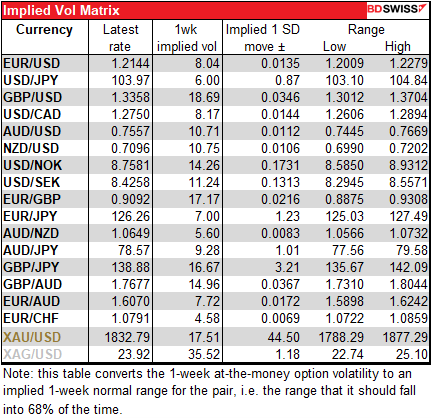 ETF holdings of gold fell slightly in the latest week. Not much, but it was the fifth consecutive week of declines. 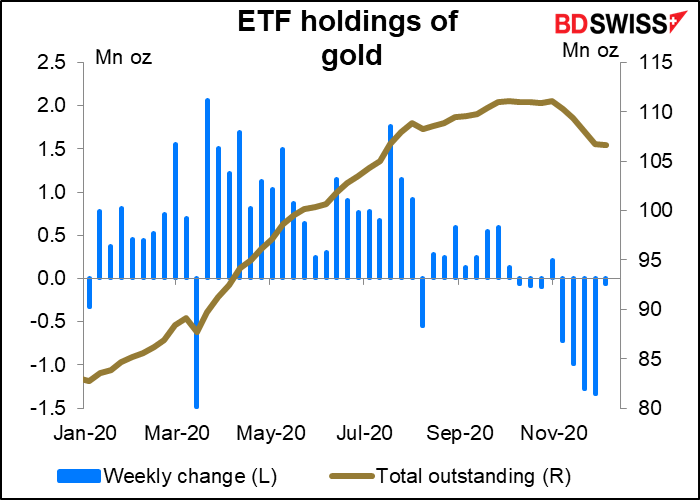 Silver also had a very small change, only it was positive for the second consecutive week. 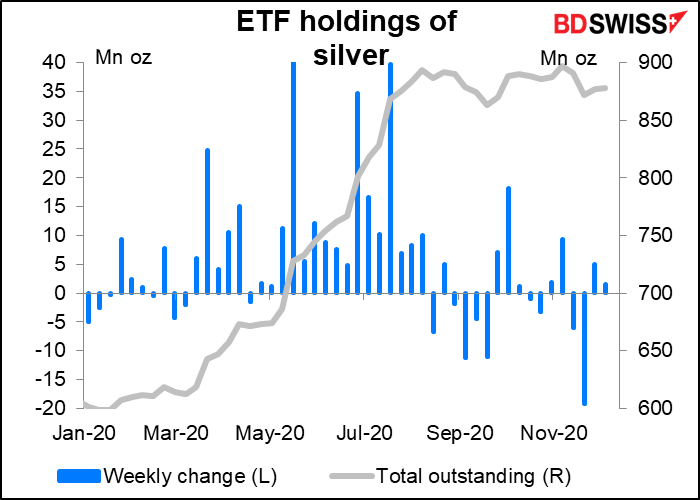 In the futures market, speculators added to their positions in both gold and silver. 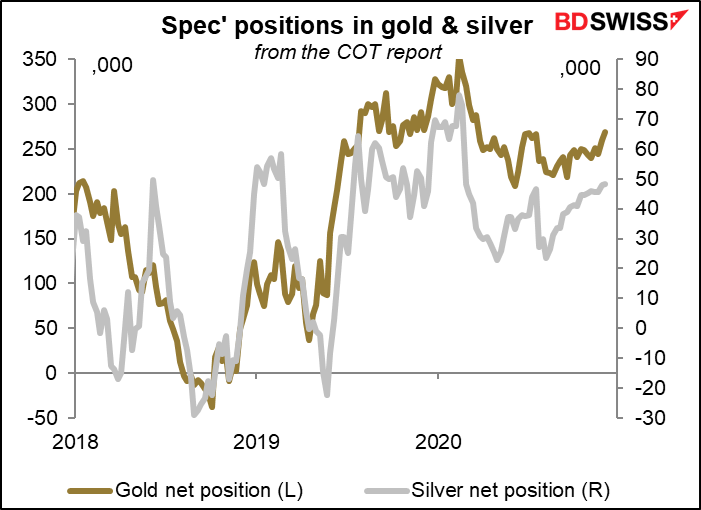 Retail however continued to reduce their long gold positions (as was the case with EFTs) but added substantially (33%) to their long silver positions. 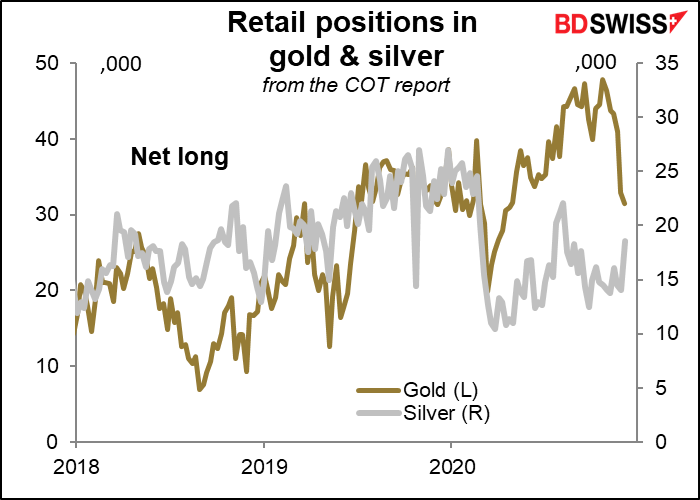 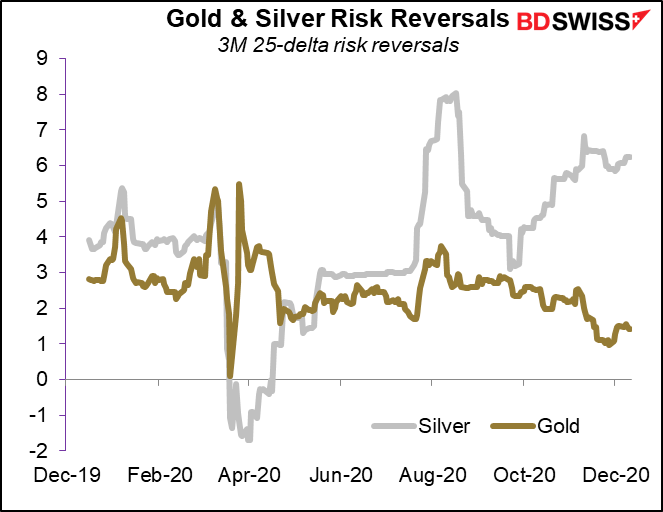 The Bloomberg composite put/call ratio (of all equity puts & calls on all exchanges) was virtually unchanged over the last week at 0.51 vs 0.52 a week earlier. 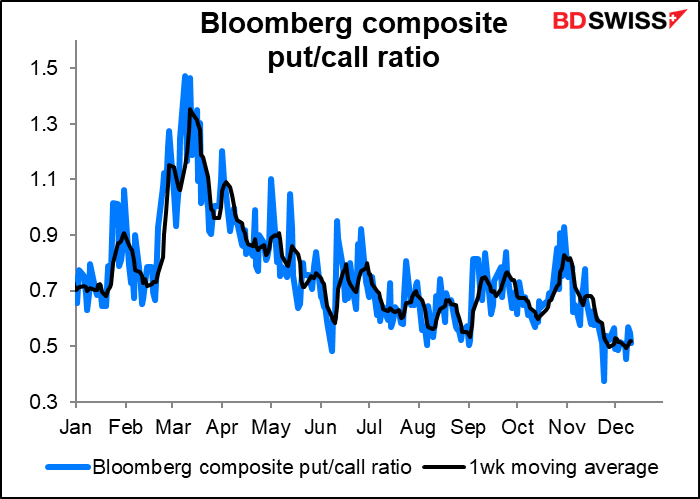 The Chicago Board of Exchange composite put/call ratio rose to 0.97 from 0.68, while the ratio for index options alone rose much less – only 0.10 point to 1.67 from 1.57. That suggests most of the put buying was on individual stocks, not the market as a whole. 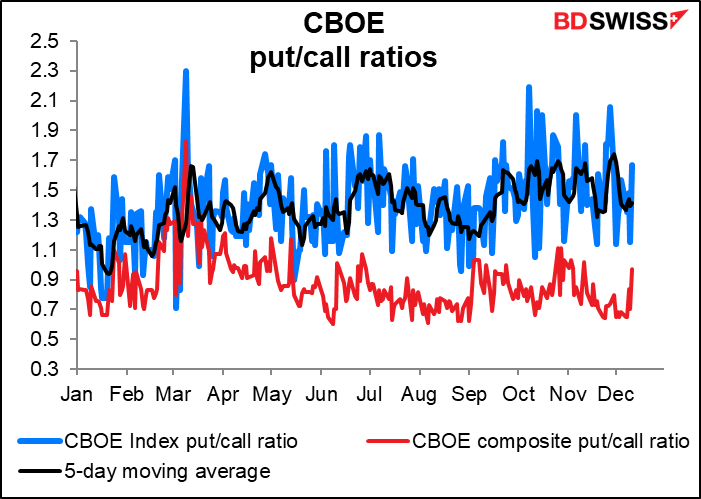 No major change in the put/call ratios for the S&P 500, NASADQ or DAX indices over the last week. In other words, people may be worrying more about certain individual stocks but not about the market as a whole. 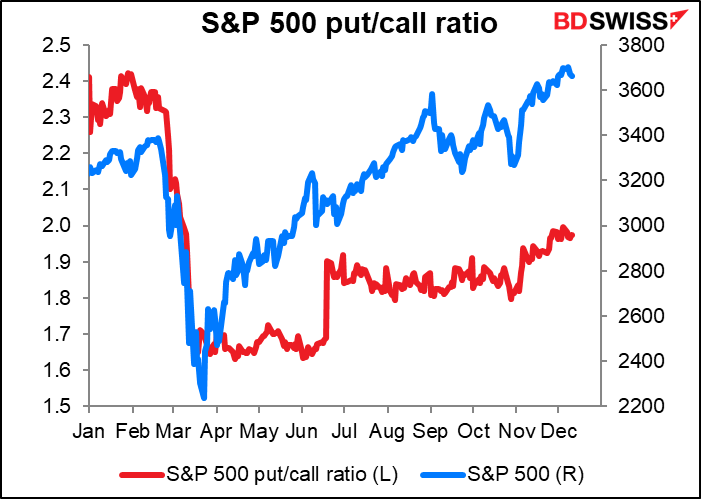 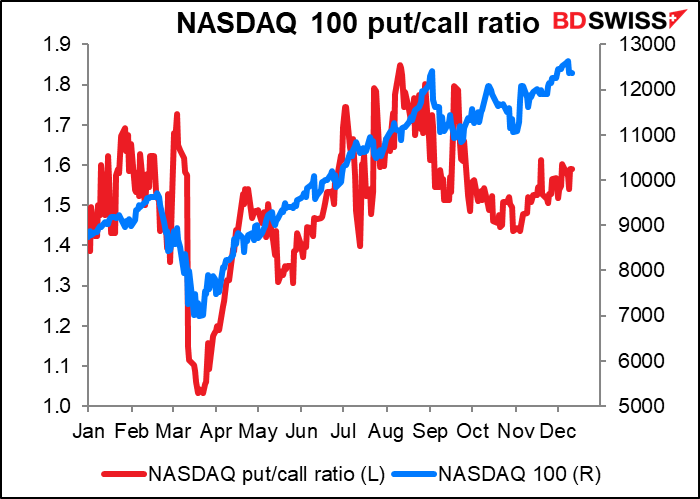 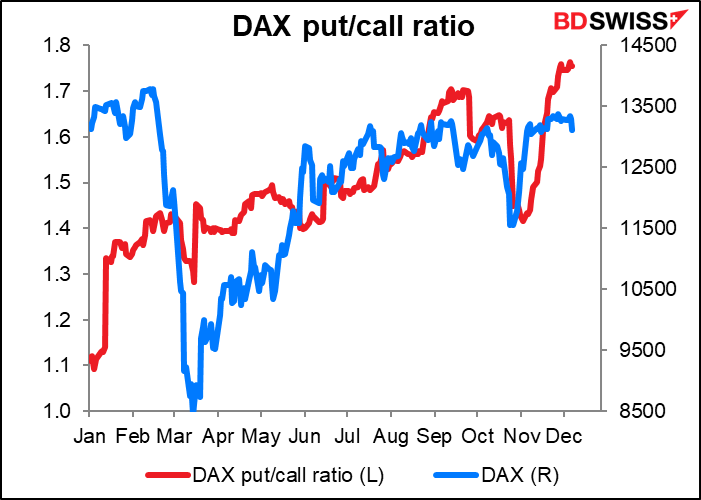