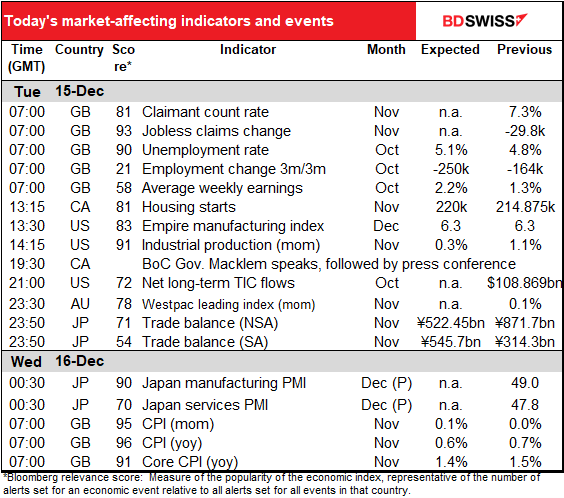 The small change on the day in GBP does mask some volatility — the range yesterday was 1.36% in GBP/USD and 0.84% in EUR/GBP, vs 0.92% and 0.74% average for the last six months, respectively. Nonetheless, volatility in GBP recently has been a bit less than the market was assuming. 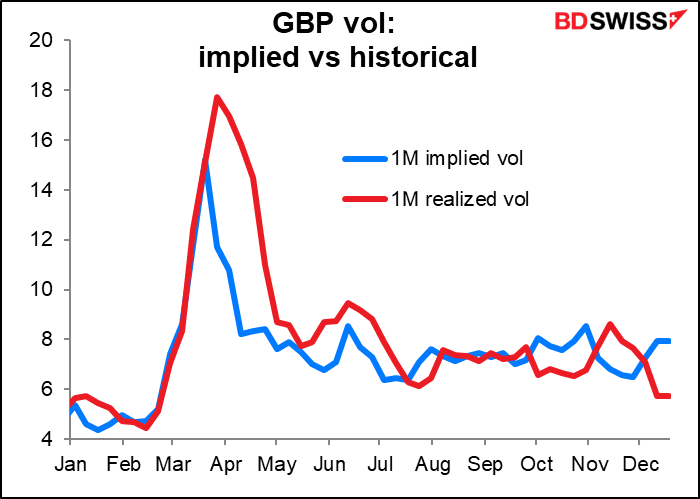 The news on Brexit was rather encouraging. The FT said, “Optimism for shift on ‘level playing field’ in Brexit trade talks — Negotiators are now focused on how to make commitments on regulatory standards work rather than on high principles.”  “Michel Barnier’s claim on Monday that fishing may now be the toughest obstacle to a UK-EU trade deal suggested both sides were inching towards an agreement on the most intractable element of the talks: the so-called “level playing field””, the paper said.

So is a successful deal of some sort already priced in? It still looks like the market is fearful of the downside. I’d say there’s more upside left if indeed they do come to an agreement. 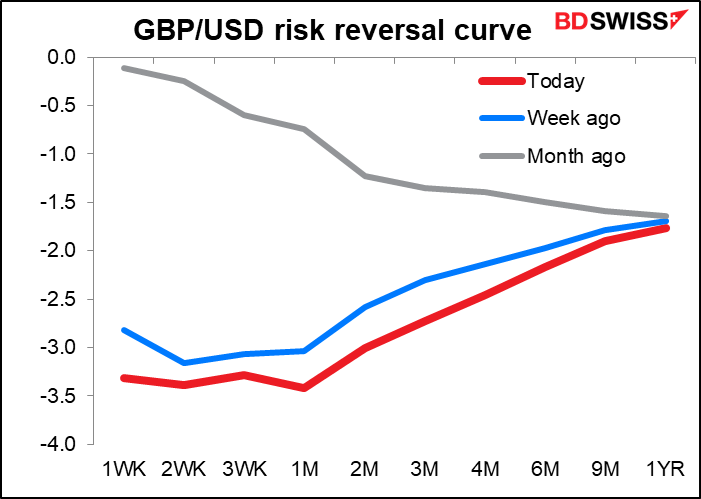 The problem is of course that reaching an agreement isn’t the end of the problems. No matter what the agreement is, the problems will only start on 1 January. For example, the huge truck park that’s being built to accommodate all the trucks that will inevitably be backed up waiting for customs clearance won’t be ready until late February, as heavy rains have delayed construction. 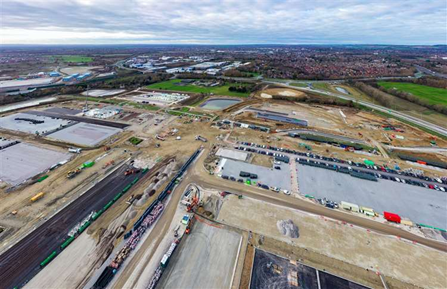 Elsewhere, the day started with a “risk-on” mood thanks to the better tone to the Brexit negotiations, intensified discussions about a fiscal package in Washington, and the start of  COVID-19 vaccinations in the US. However, the mood changed as the prospect of stricter lockdown measures in London and New York City elicited an abrupt pivot to a ”risk-off” mood in New York morning trading. The S&P 500 closed down 0.44% and most Asian stock markets are lower this morning. (The S&P 500 is indicated opening +0.1% this morning at the time of writing.)

Although the S&P 500 closed lower, the NASDAQ continued its seemingly inexorable rise and closed up +0.5% despite a Bloomberg story saying that “Tech giants deemed to be gatekeepers could face fines as high as 10% of annual revenue if they don’t comply with new European Union rules on data usage to be unveiled Tuesday.” We’ll have to see if the actual roll-out of the rule today has any greater impact. Biotech stocks were a big winner yesterday, up +2.3%, following the Pfizer vaccine rollout in the US and news of AstraZeneca buying rare-disease specialist Alexion Pharmaceuticals.

The switch to a “risk-off” mood hit AUD yesterday. It got a further kick down the stairs this morning on news that China appears to have formalized a ban on coal imports from Australia, according to Bloomberg. China took 23% of Australia’s coal exports in 2018, the latest year I have data for.

As you can see, the amount of coal that Australia exports to China has suddenly fallen, and with it the value of exports too. 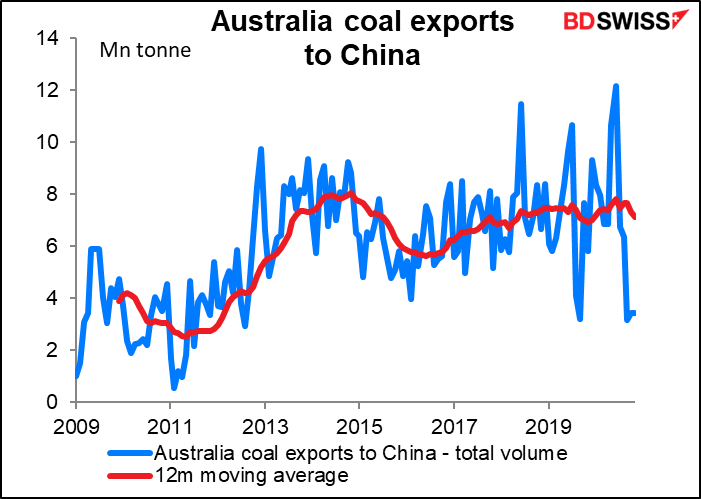 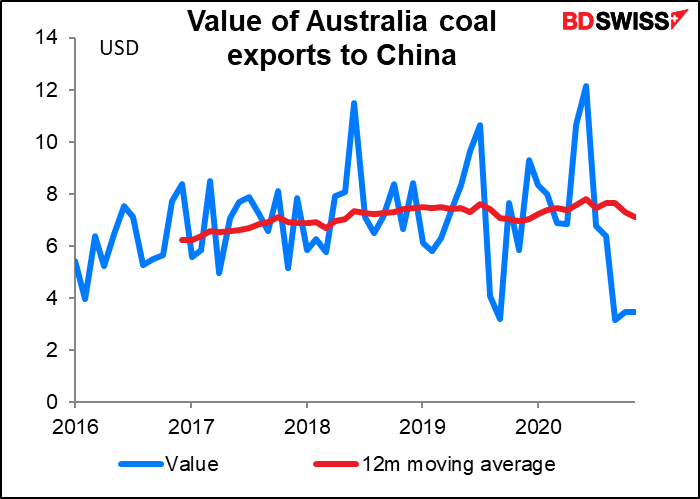 (My apologies for the rough estimate of the value – I’m not sure about the units of the export data nor the value of the futures contract that the value graph is based on, so I just have it in USD.)

Watch for what they do about iron ore in the future – China took 77% of Australia’s iron ore exports in 2018. A ban there would be a bigger blow than the blow to coal exports. 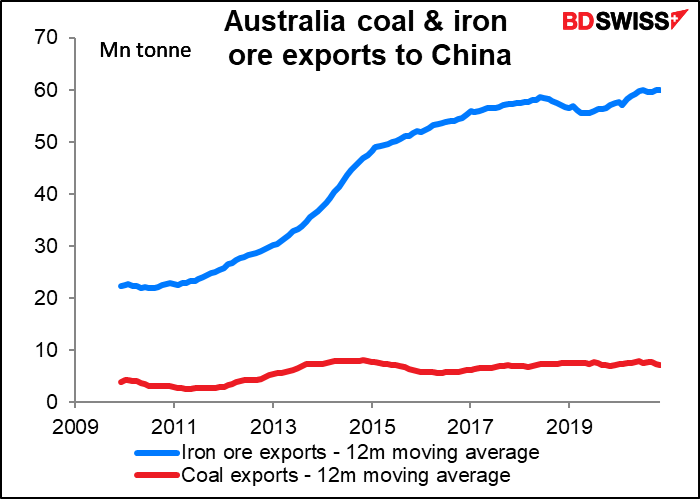 NZD/USD briefly poked its nose above 0.71, but again couldn’t sustain the move (it popped above that level briefly on 3 Dec and just failed to reach it on 9 Dec). AUD/NZD was little changed yesterday despite the New Zealand Cabinet agreeing in principle to open travel with Australia in Q1 next year (it did however fall this morning as AUD declined generally). A NZ-Australia travel bubble could help the hard-hit New Zealand tourist industry, as nearly half the tourists to NZ are from Australia. If the “bubble” is confirmed before the next Reserve Bank of New Zealand (RBNZ) meeting on 24 Feb it could make them less likely to ease further.

The day has already begun with the UK employment data. We discussed that yesterday. The results were generally better than expected, as unemployment didn’t rise as much as expected and fewer jobs were lost – indeed fewer jobs than in the previous month.

Canada’s housing starts suffered in March, April and May but have rebounded sharply since then. They’re expected to be a bit below the six-month moving average this month, but that wouldn’t be much of a disappointment. 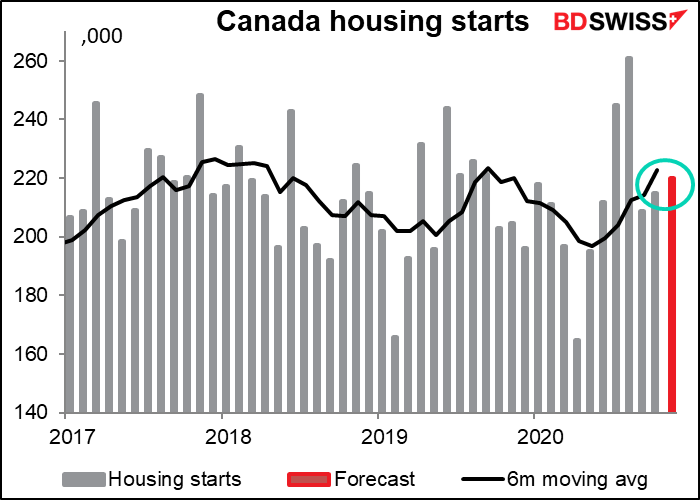 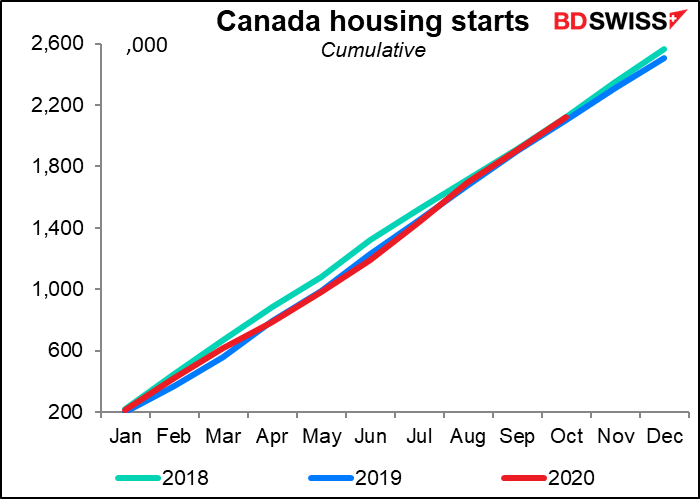 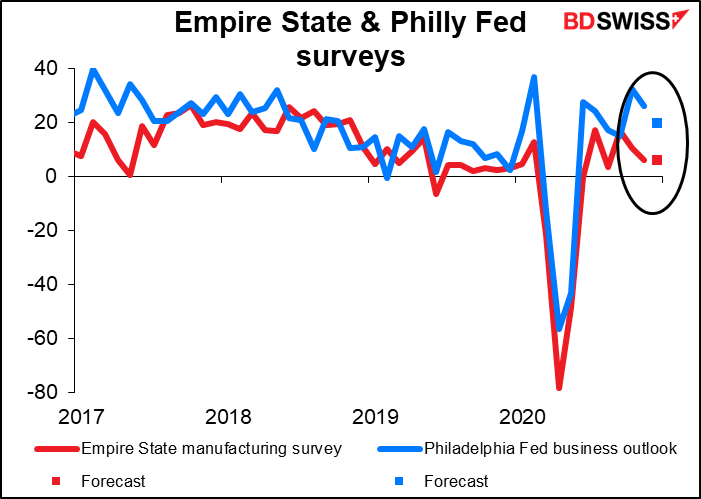 That’s also the likely conclusion from the US industrial production (IP) data, which is expected to show only a small rise in output from the previous month. IP had a strong rebound in June and July but has struggled since. 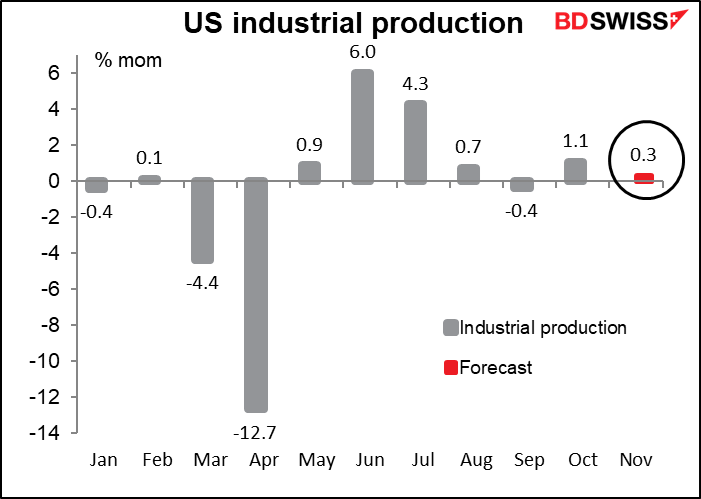 If the forecast is correct, IP will be some 5.2% below the pre-pandemic level (Jan & Feb average). 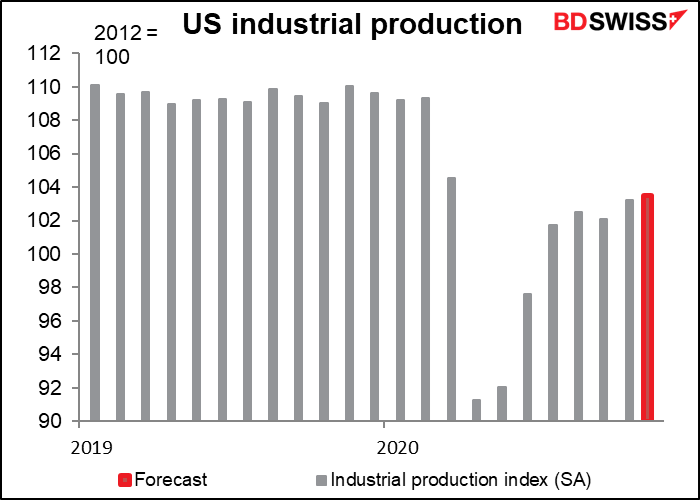 Overnight, Japan announces its monthly trade data. This isn’t watched as closely as the current account figures are, probably because nowadays the income from portfolio flows is just as if not more important than the trade flows. The market looks at the NSA figure for some bizarre reason – probably historical as for many years Japan didn’t use an accepted method of seasonal adjustment. But now that it does, I prefer to look at the SA figure, which is supposed to be up a bit – hence potentially positive for JPY. 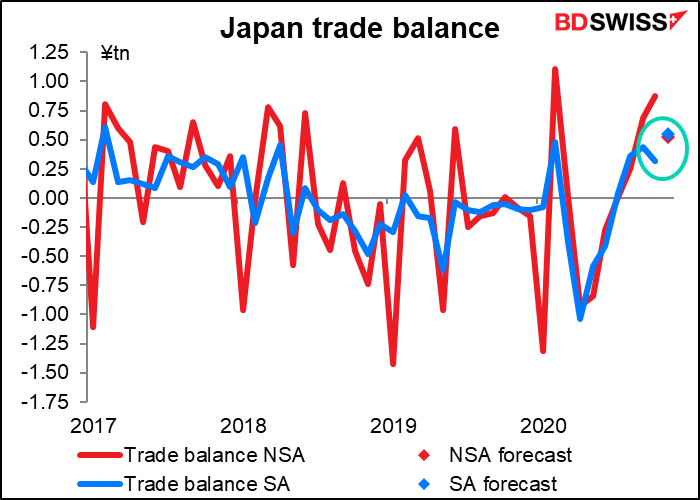 Subsequently, Japan kicks off the round of preliminary purchasing managers’ indices (PMIs) for the major industrial economies. There are no forecasts for the Japan PMIs, perhaps because unlike other countries, they aren’t particularly good at estimating Japan’s GDP. 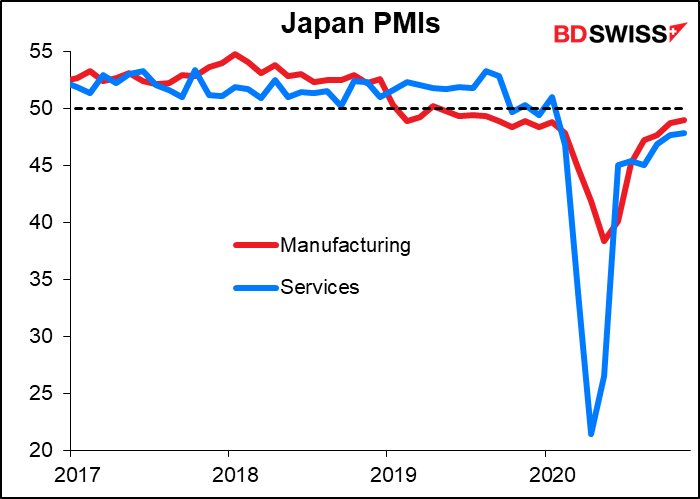 Then early Wednesday morning, as day breaks over the Thames and a million tea kettles turn on, Britain announces its inflation data. Headline inflation is already below the Bank of England’s1%-3% target, so a further small decline is probably of no importance, especially as we await any Brexit news. Tuesday morning’s UK employment data for example was better than expected but didn’t help the pound that much (I’m only judging from the first half hour or so after the announcement). 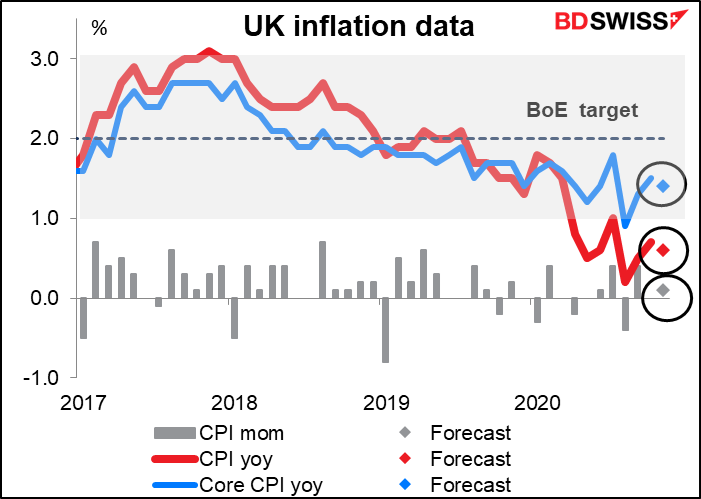 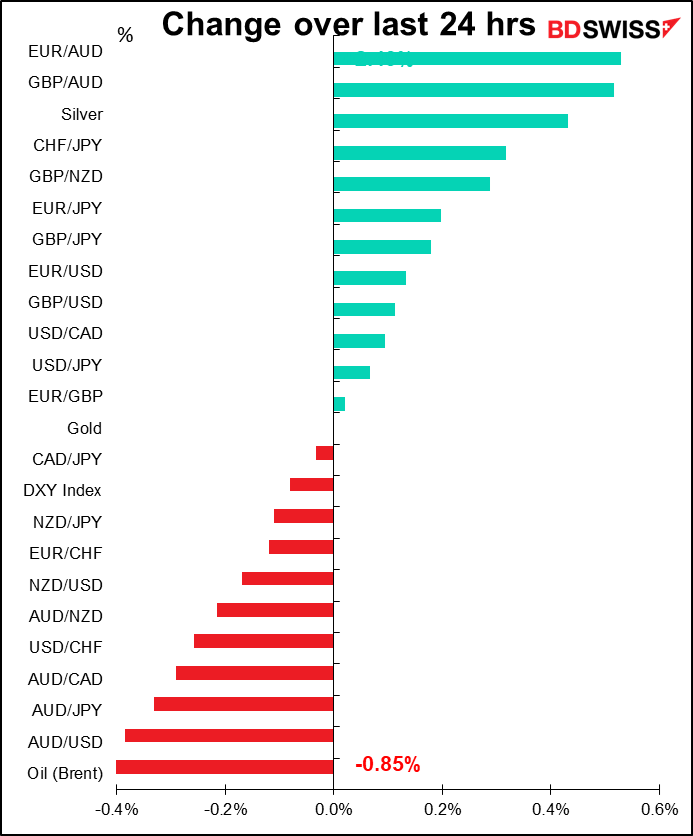