You are at:Home»MARKET PREVIEW»GBP up as Brexit deadline is postponed yet again; EU IP, China Indicator trio 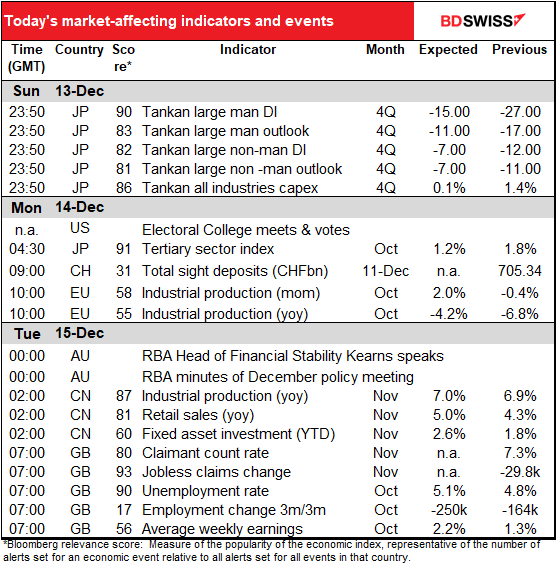 Currencies aren’t much changed from Friday morning, but with regards to GBP at least this masks a large round-trip. GBP/USD fell to 1.3135 during early US trading on Friday before recovering to end the week at around 1.3220. It then opened sharply higher in Asian trading this morning and got up to 1.3384, 1.9% above the lows, before coming off again.

What’s going on with GBP? Well, surprise surprise…it seems that Sunday’s “deadline” wasn’t really the deadline at all. UK PM Boorish Johnson and EC von der Leyen spoke on Sunday in what was supposed to be the last, final, this-is-it, end-of-the-road talks. They reportedly had a “constructive” call and agreed to “go the extra mile” for a deal. Now the FT is reporting that they have “up until Christmas” to work out a deal.

According to the BBC, here’s the state of play:

Talks are still going on at all levels of negotiation.

Bloomberg noted that we shouldn’t pay too much attention to public statements, because some of the pessimism is being used as a negotiating tactic. As the BBC said, “…however long these talks rumble on, ultimately neither the government, nor the EU, will sign up to a deal if they can’t claim it as a victory.” 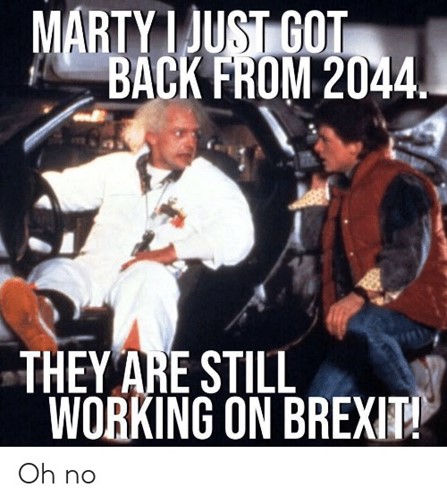 JPY was little changed despite a better-than-expected tankan. All the major diffusion indices (Dis) were better than expected, both for large & small companies, manufacturing & non-manufacturing, this quarter and next quarter. The TOPIX index wasn’t up that much though (+0.42%), perhaps because while all the numbers were better, they were still negative. IE, companies still think things are bad, just not as bad as people had expected them to say. Furthermore, if we look at the difference between this quarter’s figures and the forecast for next quarter’s, we see that manufacturers expect little if any improvement in Q1 and non-manufacturers expect things to be worse –significantly worse in the case of small non-manufacturers.

Elsewhere, there’s a slight “risk-on” tone in the markets on a report of a new attempt to pass a coronavirus package in the US. According to Politico, “A bipartisan group of senators is expected to introduce a $908 billion coronavirus relief bill as soon as Monday, with a twist: The deal is expected to be split into two pieces, according to two people familiar with the negotiations. One would be a $748 billion piece of coronavirus relief with less controversial items like schools and health care; the other would marry $160 billion in money for local governments with a temporary liability shield.” Needless to say there’s no guarantee this one will pass, either.

Most stock markets are higher in Asia, and the S&P 500 is indicated +0.4%. But the “risk-on” tone isn’t being reflected in currencies, where USD is higher. While CHF is the worst-performing currency, AUD and CAD aren’t far behind.

Meanwhile, the pandemic continues to worsen in some places and more and more places are instituting restrictions. That may be one reason why currencies aren’t in full “risk-on” mode this morning. Germany will enter a hard lockdown on Wednesday until at least January 10th. The country did better-than-average for the Eurozone during the first wave but has struggled over the last few weeks. While perhaps necessary from a longer-term point of view, the lockdown will no doubt dampen activity and confidence in the Eurozone’s leading economy temporarily even if the vaccine roll-out is near. The UK will announce the review of new restriction tierings on Wednesday. It’s widely expected that London will be placed in the strictest grouping. Restrictions are also mounting in the US. Two-thirds of California is now on stay-at-home orders as intensive-care units (ICUs) at hospitals are nearly full. 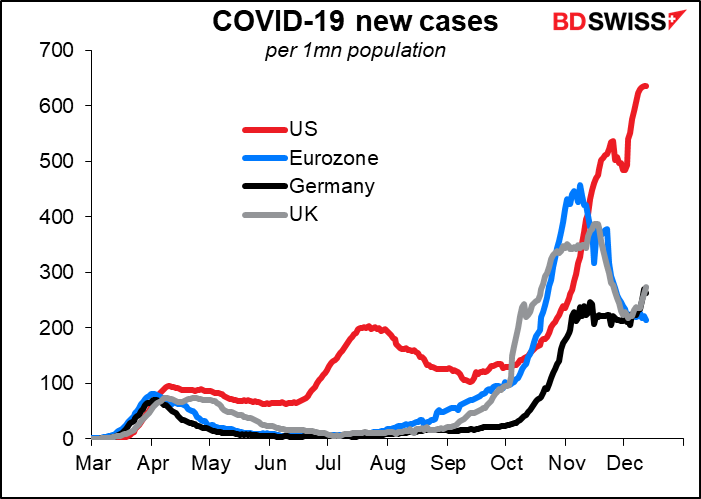 The excitement for today is mostly over – Japan’s tankan and tertiary sector index were it.

It’s noticeable that Swiss sight deposits have fallen for three weeks in a row, the first time this happened all year. 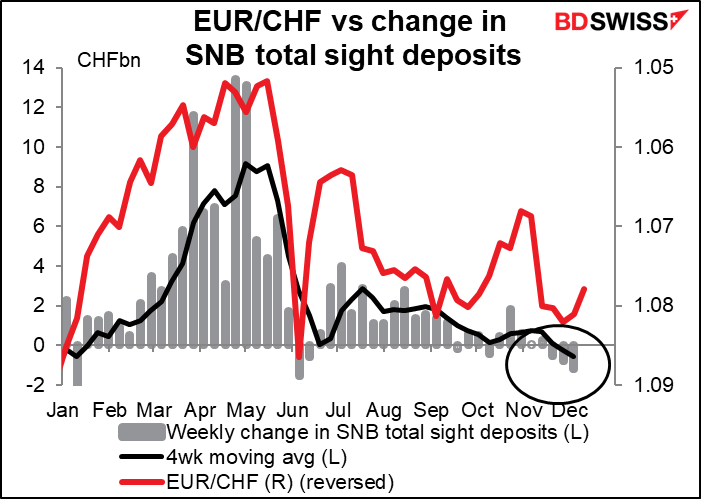 I checked back to see when else this had happened and it was:  Nov & Dec 2019, March 2019, Dec 2018, Dec 2017,  Dec 2014, Sep & Dec 2013, and December 2012 (I’m not sure how relevant the period Sep 2011- Jan 2015 is, when the EUR/CHF floor was in force.)  In other words, it mostly happens in December. So I’d put this down to some sort of seasonal pattern rather than any change in the Swiss National Bank’s intervention habits. My guess is that people shopping for Christmas causes an increase in demand for cash, which reduces bank’s deposits at the SNB. 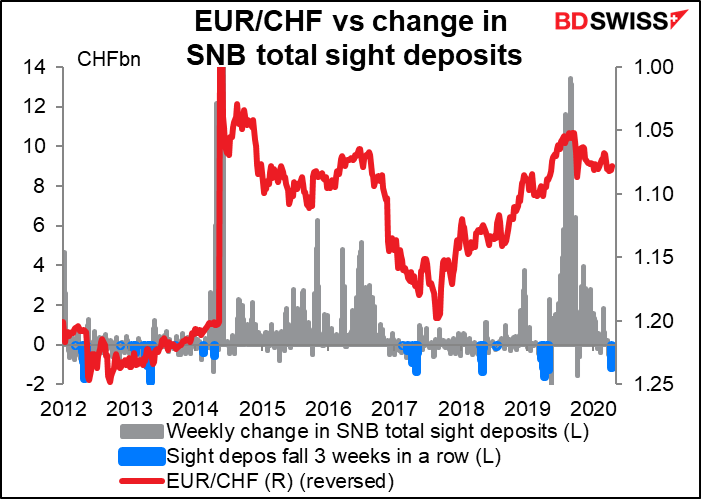 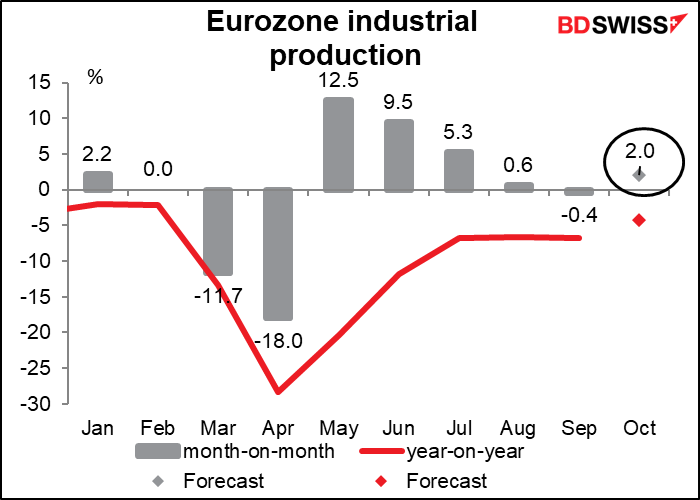 EU IP has stagnated since July. Even if today’s forecast is correct, output will be some 4% below pre-pandemic levels. That’s not bad, actually. The US was -6.5% in September, the UK was -5.9% and Japan was -8.2%. Still, what we want to see is improvement, not stagnation. 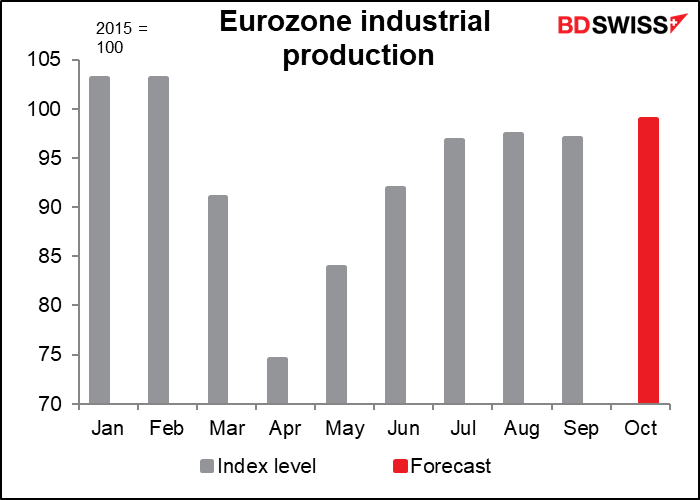 I don’t know what time it happens, but today the US Electoral College “meets” and votes for the President in one of the more bizarre electoral procedures anywhere in the world.  Naturally they are going to vote in President-Elect Biden. One would hope that this would shut down the idiots who claim without a shred of evidence that the election was stolen, but I’m afraid facts are of little importance to the Republican Party.

Overnight, China announces its usual trio of retail sales, industrial production, and fixed-asset investment (FAI). The big improvements are over, but each of these indicators is expected to show some marginal improvement still. We’ve seen that good economic performance in China recently can spur a “risk-on” mood that’s good for equity markets and AUD. 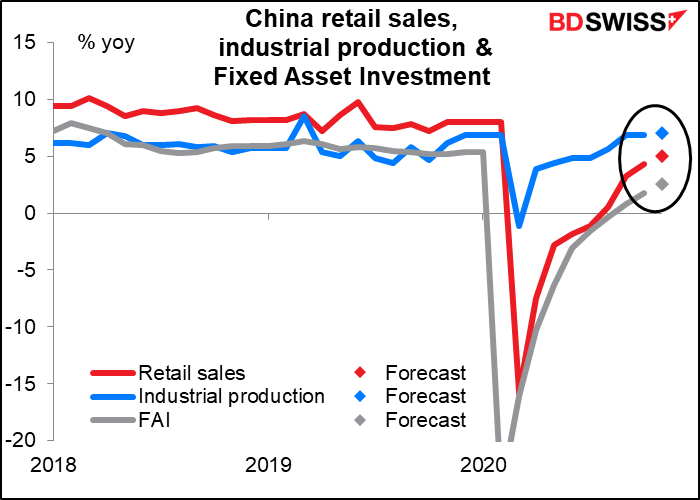 Then an hour before sunrise in London Tuesday, Britain announces its employment data. It’s expected to be the worst of the pandemic so far, with an estimated 250k people losing their jobs and the unemployment rate jumping to 5.1% from 4.8%. Will this have any impact? Maybe temporarily, but my guess is that Brexit is far more important. As Albany says at the end of King Lear, “that’s but a trifle here.” Employment is likely to fall even further in November thanks to increasingly stringent lockdown measures. 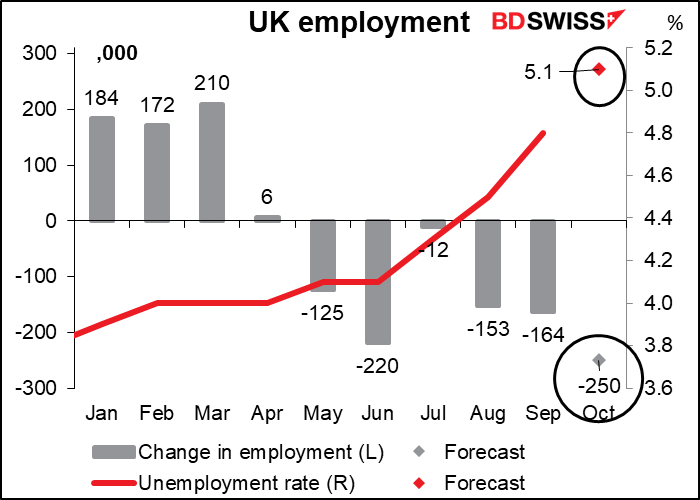 The jobless claims and claimant count rate have no forecasts but still a high Bloomberg relevance score. The higher relevance number may be a holdover from the old days, when they were the focus of attention. The UK Office for National Statistics (ONS) stopped including them in its statistical bulletin from March 2017, because, it said, the series “may now be providing a misleading representation of the U.K. labor market.” (The ONS still publishes the data elsewhere, which is why we still get it every month.) I’m including a graph just because, well, I just like to make graphs. 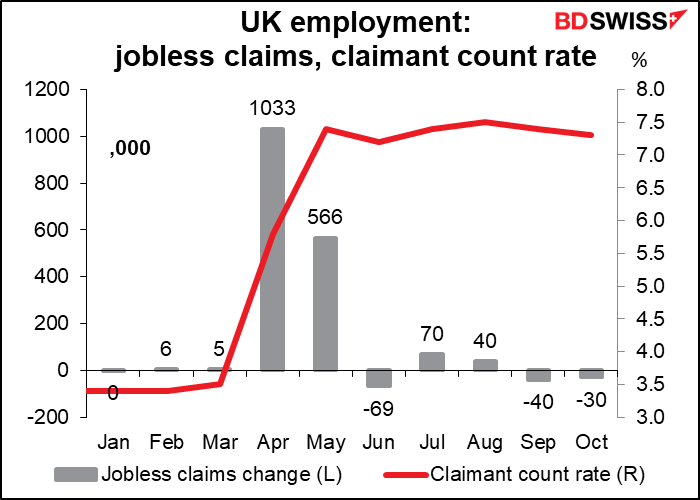 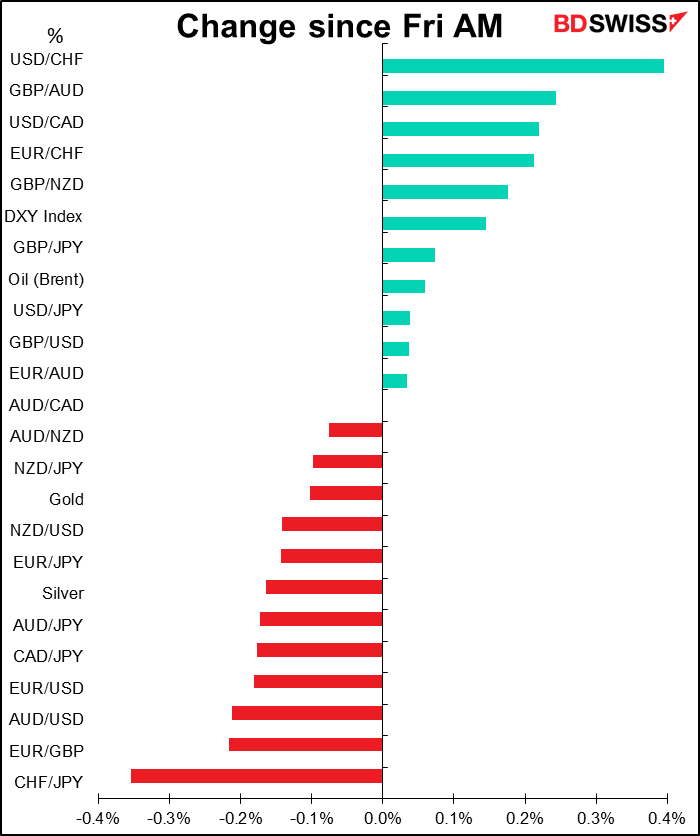