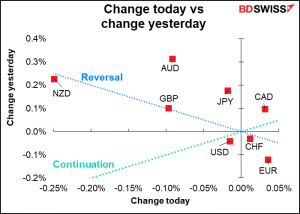 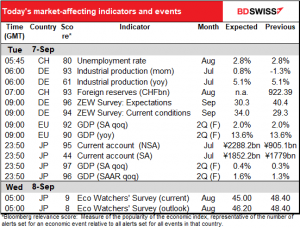 Not the busiest day on record today either.

The ZEW survey of analysts, economists and others who don’t get their hands dirty is expected to show a big increase in current conditions but a big drop in expectations. Looks like people are worried about what the future may bring. 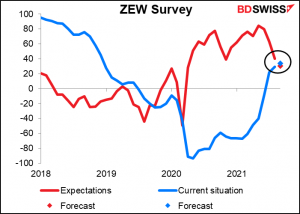 In any case, the survey seems to be a function of the DAX… 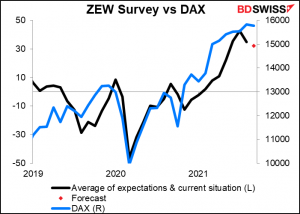 Plus nowadays the lockdown situation (which of course affects the DAX too). 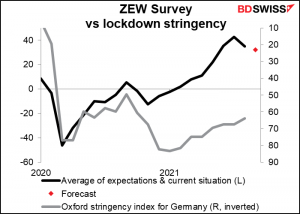 And that’s about it! The final revision of EU 2Q GDP is of only academic interest to economists.

There’s nothing notable on the schedule until Japan comes in and releases its current account data. It’s expected to leap dramatically on an NSA basis, but that’s largely seasonal – on an SA basis it’s forecast to be up just a bit. I don’t think this will have much effect on the yen if it comes out along these lines. 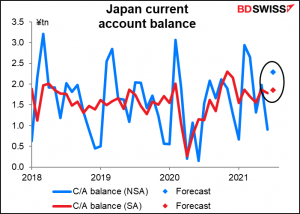 Unlike the EU, which rarely revises its GDP by more than ±0.1 percentage point, Japan is notorious for its large GDP revisions (see Japan’s wild GDP revisions stand out in G-7 from Dec. 2019). This is due mostly to the difficulty in getting accurate early figures for capital spending, which accounts for nearly 20% of GDP. The initial GDP data uses production data from the Ministry of Economy, Trade and Industry (METI) to estimate capital spending. The final estimate uses the Ministry of Finance’s quarterly corporate survey, which is more accurate but doesn’t come out until a week before the revised GDP data is released. (Japan also revises its GDP data approximately nine months after the end of the fiscal year, i.e. in December, when all the tax information is in).

The revisions to Japan’s GDP can be large enough to be market-affecting. An upward revision like this would tend to be good for stocks and therefore would probably help to promote a “risk-on,” JPY-negative sentiment. 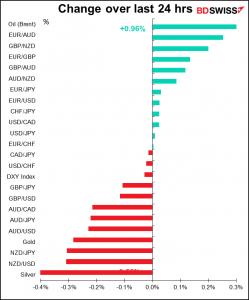