You are at:Home»MARKET PREVIEW»USD Up, CAD Down; Bank of Canada Meeting 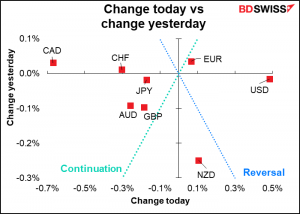 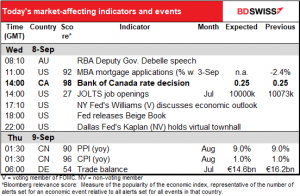 The main thing on the schedule – indeed almost the only thing – is the Bank of Canada rate decision. As you well know, I’ve already covered this in depth & detail in my world-famous Weekly Outlook. But since I get paid by the word, I’ll briefly recap what I said for those who don’t want to bother clicking the link and scrolling down.

First the conclusion for those who don’t want to read any more: I think the BoC will leave its asset purchases unchanged at CAD 2bn per week. They’ve already cut them from CAD 5bn a week and brought their overall balance sheet down to CAD 492bn from CAD 575bn in March. 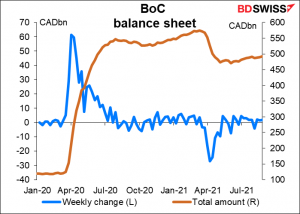 The first thing to note is the surprising fall in GDP in Q2. It was -1.1% qoq SAAR, vs the BoC’s forecast of +2.0% at the July meeting. While the BoC and the market expect a bounce-back in Q3, nothing is certain except death and taxes, eh? Especially with part of the economy back in lockdown. 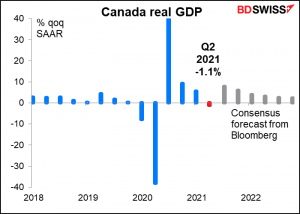 On the other hand…(there always has to be another hand)…headline inflation is running well above their target. But like other central banks, the BoC has stuck by its view that “the factors pushing up inflation are transitory,” as they said in July, and Gov. Macklem has consistently downplayed concerns about above-target inflation. 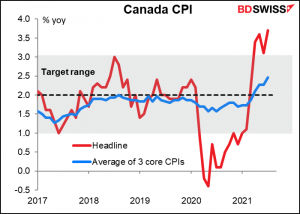 The focus then will be on the tone of the statement following the meeting. If the statement takes a relatively sanguine view of the decline in GDP and points to the country’s high vaccination rate as a reason to be optimistic about the course of the virus, then it’s likely that the market will start to price in further tapering of the pace of asset purchases, probably at the next meeting (Oct. 27), and CAD would be likely to gain.

We also have to see if there is any change in the Bank’s estimate for when “lift-off” – the time when they can finally start normalizing their policy rate – is. In July they said it’s expected to happen “sometime in the second half of 2022.” Any change there would be significant. Currently the market is pricing in about one hike by next July. 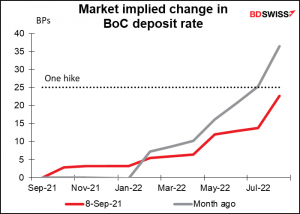 We can’t really generalize about how meetings affect CAD. The currency appreciated after the March meeting, when they held policy steady, and also after the April meeting, when they decided to taper their bond purchases to CAD 3bn a week from CAD 4bn.It weakened in June, when they held policy steady again, and also weakened in July, when they tapered by another CAD 1bn. In theory I’d say holding rates steady should cause the currency to weaken slightly, but much depends on what tone they take about the future. 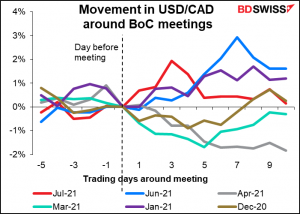 As for the indicators, today we get the Job Openings and Labor Turnover Survey (JOLTS) program, with its figure on how many job openings there are. It hit a record in June; it’s expected to be down a bit in July. But very few economists forecast this indicator and they really have nothing to go on except their hunches, so we can’t place much faith in the forecast. 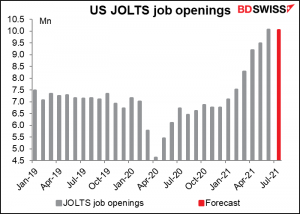 Even so, that would still mean a significantly higher number of jobs relative to the shrinking number of unemployed persons in the country. That should encourage the Fed into keeping with their tapering schedule, which would tend to push up bond yields and the dollar. 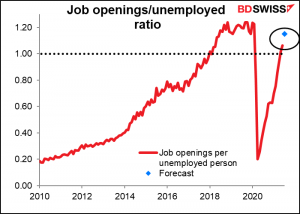 People will also be looking at the quit rate and the layoff & discharge rate to evaluate the strength of the labor market. The former – what percent of people quit their job every month – is near a series high (2.7%, vs 2.8% in April), while the latter – how many people get canned – is at the series low (0.9%). It’s a nice time to be an employee! 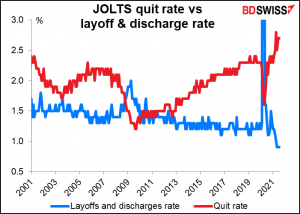 The Fed releases the “Summary of Commentary on Current Economic Conditions,” aka The Beige Book (which actually looks green to me, at least the version you can buy in the store) as always two weeks before the next FOMC meeting. It’s significant for the market because the first paragraph of the statement following each FOMC meeting tends to mirror the tone of the Beige Book’s characterization of the economy. The book doesn’t have any number attached to it that quantifies its contents, but many research firms do calculate a “Beige Book index” by counting how many times various words appear, such as “uncertain.” In any case, the book is largely anecdotal so you’ll just have to watch the headlines as they come out.

The news is not expected to be good – the rate of increase in the producer price index (PPI) is forecast to be unchanged at +9.0% yoy, which is pretty high. On the other hand, the high PPI doesn’t seem to be pushing up Chinese consumer prices – the rate of increase in the consumer price index (CPI) is also expected to be unchanged, so perhaps it won’t feed through into higher global inflation, either. 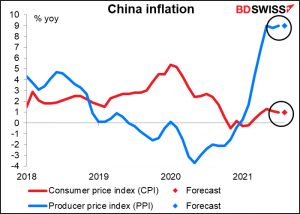 Then early tomorrow morning, Germany’s trade and current account surpluses are expected to be lower, but without The Former Guy (TFG) in the White House nattering on about “The Germans are bad, very bad,” nobody cares. 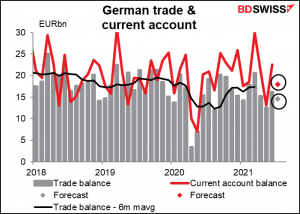 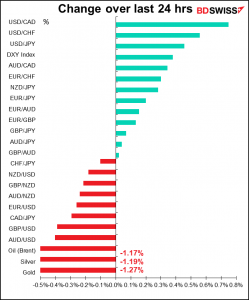