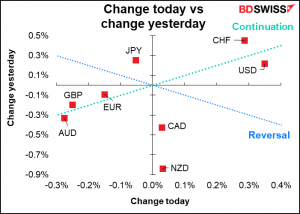 Today I Learned: The Reserve Bank of New Zealand (RBNZ) does not think the same way as the Reserve Bank of Australia (RBA). I thought the RBNZ would take a page out of the RBA’s playbook and keep on the relatively hawkish track that the market had been expecting before Tuesday’s shock lockdown. On the contrary! They cancelled the rate hike altogether.

The statement following the meeting was vaguely amusing, at least for those of us who have to read some 63 of these each year (well, I have to admit I just skim the Bank of Japan and Swiss National Bank statements as they rarely say anything new). It reads much like my comment on the meeting yesterday: something that I wrote ahead of time and then suddenly had to alter to fit the changed circumstances. Most of the statement is taken up explaining why they should hike rates, e.g. “Employment is currently at or above its maximum sustainable level, and consumer price inflation expectations remain anchored near 2 percent, the midpoint of the target range,” or “Capacity pressures are now evident in the economy, particularly in the labour market…” and “House prices are also above their sustainable level…” Do those sound like reasons to keep rates at the effective zero bound?

No, but they didn’t want to hike in the face of the lockdown. They still plan on hiking in the future though. I suppose the meeting can be summed up as “tune in again at our next meeting on Oct. 6th.” The final paragraph, which gives their forward guidance, read:

The Committee agreed that their least regrets policy stance is to further reduce the level of monetary stimulus so as to anchor inflation expectations and continue to contribute to maximum sustainable employment. They agreed, however, to keep the OCR unchanged at this meeting given the heightened uncertainty with the country in a lockdown.

Notice the phrase “at this meeting.” That implies to me that they might not keep it unchanged at the next meeting… Depending of course on the virus.

If we compare the market’s thinking now to what was expected before the news hit, we can see that they’ve pushed out the timing for the next hike and see rates rising a bit more gradually than before. But the expectation is clearly that they will indeed launch a tightening cycle at the October meeting (odds of that are 72%, while odds of a hike by the November meeting ar 160%.) And the endpoint next year hasn’t changed that much. 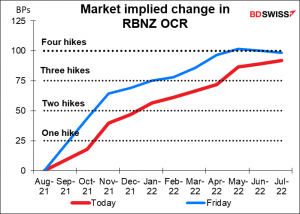 In fact, contrary to my expectations that the RBNZ would follow the RBA’s lead, it looks like the RBA might be willing to follow the RBNZ! The minutes of the Aug. 3 RBA meeting, released yesterday, revealed that “The Board would be prepared to act in response to further bad news on the health front should that lead to a more significant setback for the economic recovery.” That sentence wasn’t in the statement following the meeting. Given that Australia’s virus cases are still climbing and Melbourne and Canberra have had to extend their lockdowns, they could take some action at the Sep. 7th meeting. (The RBA meets 11 times a year, unlike most other central banks, which meet 8 times.) That statement may be one thing behind the poor performance of AUD this morning, as well as the fall in commodity prices and the rise in risk-aversion in general.

At the same time, the increase in virus cases in the previously well-guarded countries of New Zealand and Australia have driven home the point that “if it can spread here, it can spread anywhere.” Or as the RBNZ put it, “…the need to reinstate COVID-19 containment measures in some regions highlights the serious health and economic risks posed by the virus…(it) is a stark example of how unpredictable and disruptive the virus is proving to be.” NZ found six additional cases today and the Australian state of New South Wales recorded 633 new cases, up 32% from Monday’s level, which was the previous record high. “What the data is telling us in the last few days is that we haven’t seen the worst of it,” said NSW Premier Gladys Berejiklian.

These fears are likely to keep risk assets jittery over the next several days. Nonetheless, the lesson of the last decade has always been to “buy the dips.” This morning almost every stock market in Asia is higher and the STOXX 600 and S&P 500 are both indicated opening slightly higher. We could see the commodity currencies staging a recovery today too. 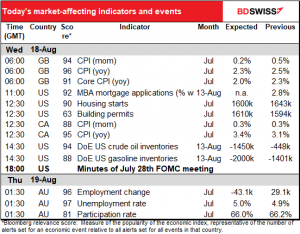 We already got the UK consumer price index (CPI). It was even lower than expected. Not that much effect on GBP immediately though, perhaps because the currency weakened so much vs USD yesterday anyway.

Mortgage applications as reported by the Mortgage Bankers’ Association (MBA) have been running below last year’s extraordinary level but are still doing well nonetheless. 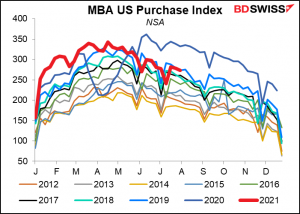 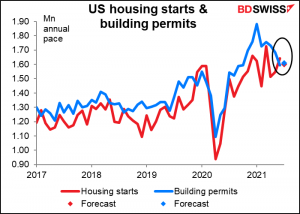 The omens aren’t good; yesterday’s National Association of Home Builders (NAHB) housing market index for August fell sharply to 75 from 80 – it was expected to stay at 80. 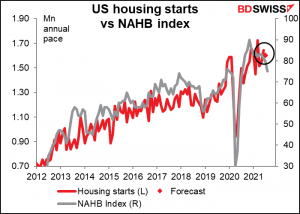 Canada’s consumer price index (CPI) is expected to accelerate somewhat due to supply chain disruptions and higher energy costs, but the core measures, which are what the Bank of Canada says they base their rate decisions on, are expected to remain unchanged around the middle of their 1%-3% target range. The rise in the headline figure could prove positive for CAD nonetheless. 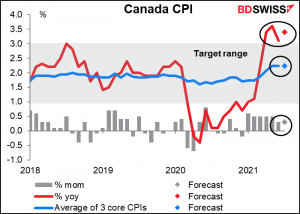 So then we come to today’s pièce de resistance, the minutes of the July 28th meeting of the rate-setting Federal Open Market Committee (FOMC). I hate to be boring, but guess where I already discussed this? You got it! My Weekly Outlook. But since I get paid by the word anyway, I’ll rehash that discussion and save you the arduous task of clicking on the link.

Fed Chair Powell admitted in his post-meeting press conference that they discussed whether they should “taper down” their $120bn-a-month bond purchases and if so, when and how, e.g. whether to cut mortgage-backed security (MBS) purchases first and then Treasuries or both at the same time. The minutes are likely to shed some further light on these technical discussions and perhaps give us some insight into what kind of data would meet the “substantial further progress” benchmark that they’ve set for tapering.

It’s clear that most members think the Fed has reached its inflation target of “inflation moderately above 2 percent for some time.” The deciding factor then is the labor market. Listening to officials’ comments since the meeting, both doves and hawks want to see the autumn employment data, particularly around school reopenings, before beginning the process of tapering. Even some of the more hawkish officials said they’d like to see “a couple” of more strong jobs reports before deciding. Given that the Fed won’t have the September employment report available at its Sep. 22nd meeting, the best it could do then would be to put the market at notice that a decision is likely to be imminent “at upcoming meetings,” with the Nov. 3rd meeting the earliest that they could announce the start.

Regarding the pace of tapering, the June meeting minutes indicated that “several participants” wanted to see MBS reduced “more quickly or earlier than Treasury purchases in light of valuation pressures in housing markets.” However “several other participants” disagreed and thought they should be cut “commensurately.” Note that the minutes used the same terms for both sides: “several participants.” Everyone will be examining the July minutes closely to see if they use the same numerical term for both and also whether they use “participants” (everyone) or “members” (voters) to describe the two camps.

Overnight, Australia will release its employment data. The number of people working is expected to fall by 50k while the unemployment rate is forecast to rise one tick to 5.0%. This is not surprising, given the deep lockdown that the country has been experiencing. I’d say the risk is that employment falls by even more and the figure proves negative for AUD.

At their last meeting, the Reserve Bank of Australia (RBA) confounded the experts (read: me) and kept policy steady instead of loosening in some way to take into account the worsening virus situation. A rise in the unemployment rate with a fall in the unemployment rate might convince them to do otherwise, or at least get the market speculating on whether they might do otherwise. AUD- 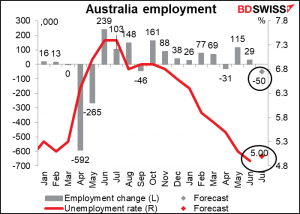 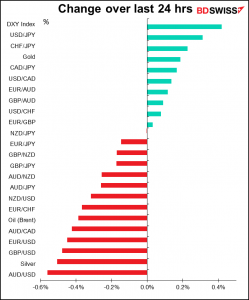