The standout feature this morning is the plunge in NZD. This occurred because of one COVID-19 case “in the community,” according to the Ministry of Health. This surprised me, because while New Zealand’s caseload is extraordinarily low, it is not zero. Apparently most of the others were caught at the border and hence are not “in the community.”

They haven’t announced any lockdown measures so far, but PM Ardern said “going hard and early has worked for us before.” Director General of Health Ashley Bloomfield made the crucial point that ‘there is no obvious link between this case and the border,” meaning that this person must have gotten it from someone else in New Zealand – i.e., the virus has managed to escape into the wild there. 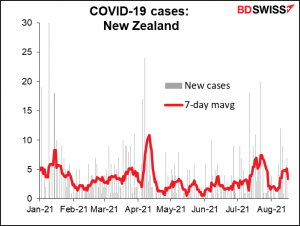 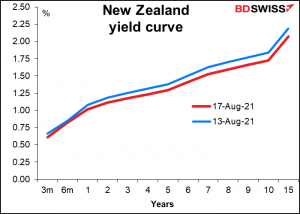 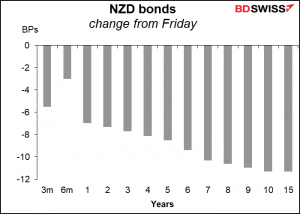 …as the market slowed the expected pace of tightening. 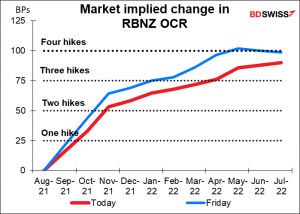 The news totally changes the market implications of the RBNZ meeting. Whereas I had expected the RBNZ to be relatively cautious and for that to disappoint the hawks, I now think that the RBNZ is likely to disappoint the doves and NZD is likely to strengthen after the meeting. I think the recent comments by the Reserve Bank of Australia (RBA) after the severe lockdowns in that country may give us a hint of what’s likely to come from the RBNZ.

Just to remind you, here’s what the RBA said after their meeting Aug. 3:

The economic recovery in Australia has been stronger than was earlier expected. The recent outbreaks of the virus are, however, interrupting the recovery and GDP is expected to decline in the September quarter. The experience to date has been that once virus outbreaks are contained, the economy bounces back quickly. Prior to the current virus outbreaks, the Australian economy had considerable momentum and it is still expected to grow strongly again next year.

I’ve expected the RBNZ to be cautious and retain flexibility in the face of an uncertain global environment. I had thought that this would disappoint the hawks and NZD would fall after the meeting. But now clearly the trading community has shifted over to the dovish side and NZD has fallen even more than I expected it would after the meeting. Therefore if as I expect the RBNZ does say something like the RBA did, I’d expect NZD to bounce back afterward.

In my Weekly Outlook I discussed in great detail the reasons why the RBNZ is likely to hike. I won’t repeat that whole discussion here; just click on the link if you’re interested in reading it. To sum up, inflation is way over target, employment has returned to the pre-pandemic trend, and house prices are soaring. I don’t think a case or two of COVID-19 and even a one- or two-week lockdown would change that significantly.

While they did have longer lockdowns early on during the pandemic, this year In February and March, NZ had just eight and 11 days of lockdown in response to an average of between 3-4 new cases a day. I would expect something similar this time or even shorter, given that this is only one case (so far). That shouldn’t be enough to materially change the RBNZ’s plans. 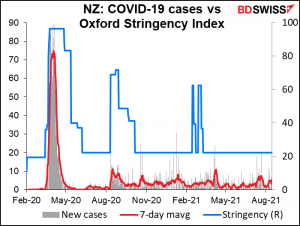 Elsewhere, it was generally a “risk-off” day in the FX market although the S&P 500 did managed to eke out yet another record high. Nonetheless Treasury yields fell and the safe-haven CHF and JPY were the best performers once again and the commodity currencies the worst. Note how CHF, AUD, and CAD all sit almost exactly on the 450 “continuation” line in the second chart above, indicating that they rose (CHF) or fell (AUD & CAD) by about the same degree Monday as they did on Friday, and JPY isn’t far off. This “risk-on, risk-off” gyration can hardly be called a trend however. USD & EUR on the other hand were small reversals.

The UK employment data were generally in line with or better than expected. The news should be supportive of GDP.

The second estimate of EU-wide GDP is pretty boring. It’s almost never revised, and when it is, it’s just ±10 bps, so who cares. They don’t really know GDP to ±0.10% anyway so it’s meaningless.

Canadian housing starts are expected to continue at their recent high levels. Although this is down from the record March level, it’s 31% above the pre-pandemic rate (Jan/Feb 2020) of around 213k. In any event, the Bank of Canada said in its July statement that “housing market activity is projected to ease back from historical highs,” so a slight slowdown would not be unexpected. CAD+ 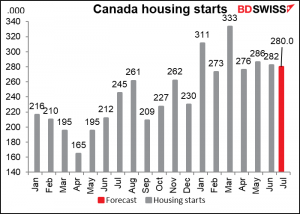 We then come to the main show of the week, the Bigus Indicatorus, the US retail sales. The Bureau of Economic Analysis has already announced a fall in motor vehicle sales for the month, so that will probably weigh on the headline figure. 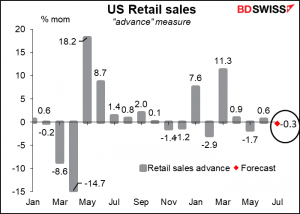 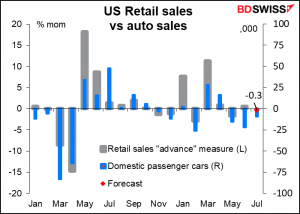 However, sales excluding autos are also expected to be somewhat soft, in a bit of mean reversion after strong online sales in June. I think these kinds of figures are likely to be neutral for the dollar. Anything less though and the currency could suffer. 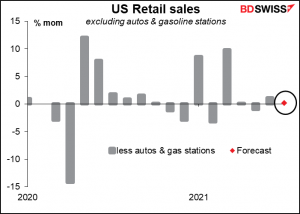 Meanwhile, US industrial production is expected to be up a healthy 0.5% mom. While that may not be so impressive when compared to the 1%+ gains recently, if we look at the five years before the pandemic, IP had only registered a mom gain of that degree or more 12 times in 60 months, and on average was down 0.031% mom. So it’s a pretty robust gain that points to continued strong production. That’s positive for the dollar. 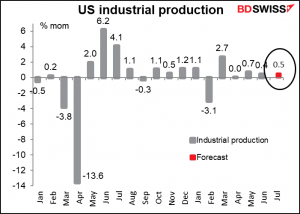 The next highlight is unusual: Fed Chair Powell “will host a town hall with educators and students…During the event, Chair Powell will respond to questions asked by participants who will join the event virtually from across the country.” I’m not sure what they could ask that the Washington press corp didn’t ask after the July 28th Federal Open Market Committee (FOMC) meeting. (I’m reminded of when President Clinton appeared on MTV and someone asked him whether he wore briefs or boxer shorts – maybe they could ask Powell that?) In any case, this event has traditionally not been a forum for market communications so I don’t expect much enlightenment.

Overnight, Japan announces its trade balance. Not much excitement is expected; it’s predicted to be down a bit on an NSA basis but back in the black on a SA basis as export growth outpaces imports. But small moves either way. 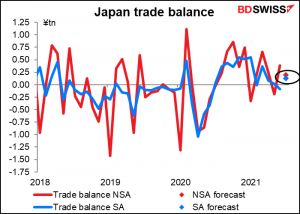 Japan’s machinery orders, the indicator I love to hate, are expected to be down after three consecutive “up” months. There’s a split between orders from manufacturers (doing well thanks to demand from overseas) and non-manufacturers (who are still languishing in the doldrums). 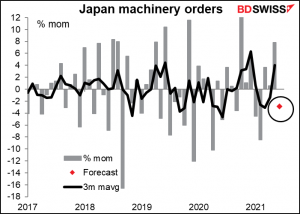 Finally, like yesterday, we wait for dawn to break over the Thames so we can get the latest dirt on the UK economy, in this case UK consumer price index (CPI). The inflation rate is expected to fall, with the core rate coming back almost exactly to the 2% line. This might surprise the Bank of England, which said after its August 5th meeting that “CPI inflation is projected to rise temporarily in the near term, to 4% in 2021 Q4, owing largely to developments in energy and other goods prices, before falling back to close to the 2% target.” A decline in inflation now certainly doesn’t rule out a rise later as the economy reopens and the service & hospitality sector has to raise wages to attract workers back. Nonetheless, slowing inflation now could be a GBP-negative development. 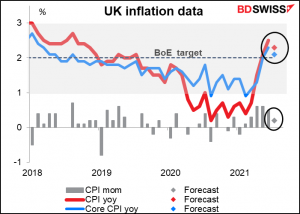 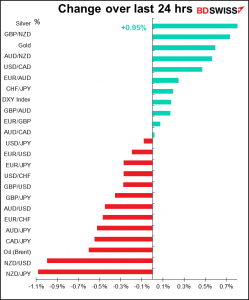