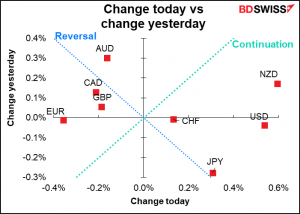 Happy Bastille Day! I was a History major in college. The most difficult course I took was French Revolution. So this day is tattooed on my heart.

Well, I thought the Reserve Bank of New Zealand (RBNZ) was likely to turn more hawkish at this meeting and that it would be positive for NZD, but I didn’t anticipate this ind of action. Luckily Bloomberg said it was “a surprise move,” meaning I wasn’t the only one caught out. The statement following the meeting was titled Monetary Stimulus Reduced. They said they would stop their asset purchases under the Large Scale Asset Purchase (LSAP) program by July 23rd (next Friday). The Official Cash Rate (OCR) and the Funding for Lending Programme will be unchanged.

I had thought that they might be more hawkish in response to higher inflation, but in fact like many central banks around the world, they said they expected inflation to spike higher but that it would be the result of either “one-off” factors, such as higher oil prices, or “temporary” factors having to do with the pandemic, such as supply shortfalls and higher transport costs.

No, the reason they turned more hawkish was because of the general improvement in the New Zealand economy. “Recent data indicate the New Zealand economy remains robust,” they said. They noted that “Aggregate economic activity is above its pre-COVID-19 level” and cited strong household spending, construction, and business investment.

Although they left the OCR unchanged, the market is now pricing in a first hike probably at the October meeting. This is a significant change for the RBNZ, which is now the first G10 central bank to withdraw its stimulus, and probably warrants a stronger NZD. 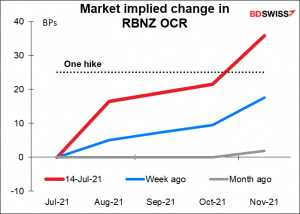 The US inflation figures were even worse (= higher) than expected. 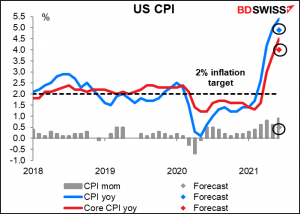 The “pandemic-sensitive” items, those that were particularly affected by the pandemic, showed no signs of slowing yet. Much of the argument for why higher inflation is supposed to be “transitory” rests on the idea that it’s stemming from these particular areas, which are bound to come back to earth eventually. But used car prices, the main villain in this story, rose further, up +10.5% mom (vs +7.3% in May and +10.0% in April). 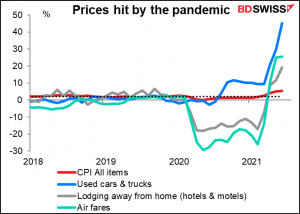 However, another pricing source – Manheim Auctions, the world’s largest auto auction company, produces its own index of used car prices that says they actually fell in June. So perhaps the official figure will start to turn soon too. 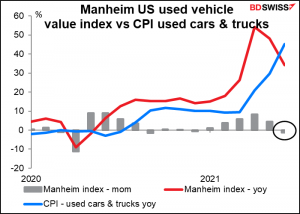 The reaction in the market though was similar to last month’s, when a surprisingly high CPI didn’t have much impact. There was an initial reaction in the Treasury market but no follow-through and yields were pretty much unchanged by mid-morning. Rates rose sharply however after a poorly received auction of 30-year Treasury bonds. 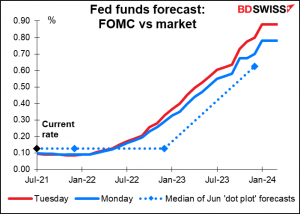 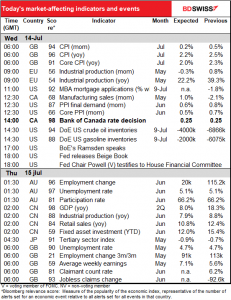 There’s lots on the schedule today.

The UK inflation data is already out. The CPI data were higher than expected even while the PPI were lower.

Eurozone industrial production is not a major market-mover, but I have seen it affect markets. It’s expected to be down a bit. 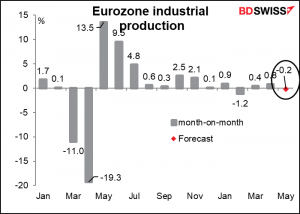 Looking at the projected index level, it’s expected to be -0.4% below the pre-pandemic level. So almost recovered but not quite. 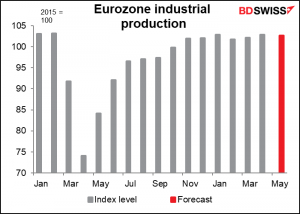 Then comes the US producer price index (PPI). The PPI is closely watched as a harbinger of future inflation, the idea being that if companies raise their selling prices, pretty soon retailers will raise their selling prices, too. It doesn’t always work out that way, though. See The PPI and the CPI: what’s the connection? for a discussion of the relationship between the two indices.

Following yesterday’s blowout US CPI, the PPI will be scrutinized closely for indications about upstream pricing pressures that might tend to keep prices rising at the recent unusual pace. 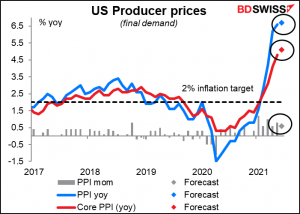 Then the high point of the day: the Bank of Canada rate decision. As always, I wrote about this in some detail in my Weekly Outlook, but since I get paid by the word, I might as well repeat the gist of it. In short, I don’t expect them to change policy, and if anything I think they might take a more dovish stance that could be negative for CAD.

The BoC’s policy guidance at its June meeting read

We remain committed to holding the policy interest rate at the effective lower bound until economic slack is absorbed so that the 2 percent inflation target is sustainably achieved. In the Bank’s April projection, this happens sometime in the second half of 2022

This is the month for a new edition of the quarterly Monetary Policy Report (MPR). In the last one (April), they forecast that Q1 GDP would be up 7.0% qoq and Q2 would be up 3.5%. In the event, Q1 GDP came in at 5.6% qoq SAAR and the market consensus for Q2 is +2.0% qoq, also substantially below what they had expected. 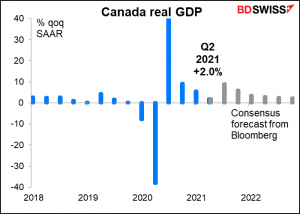 Moreover, the unemployment rate at 7.8% remains stubbornly high and the labor force employment rate (persons in employment as a percentage of the working-age population) has also failed to recover. Some people were encouraged by the higher-than-expected 231k rise in employment in June, but that was entirely due to part-time jobs – full-time employment fell by 33k. 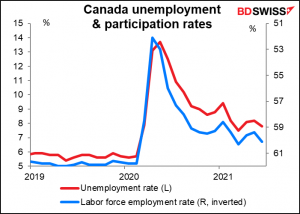 Looking at the employment picture, it seems to me that it’s going to be some time before the “economic slack” is absorbed.

The BoC can perhaps be more optimistic than some other central banks because the virus is not surging there as it is elsewhere. While they may upgrade their forecasts somewhat in the MPR, I would expect the statement following the meeting to remain pretty much as it is and for the forward guidance to remain essentially unchanged. That could put some downward pressure on CAD.

Fed Chair Powell begins his two-day testimony to Congress today. Today he’ll testify to the House Financial Services Committee and tomorrow the Senate Banking Committee. They released the Fed’s seminannual Monetary Policy Report a few days ago – you can read it here if you’re interested in 75 pages about US monetary policy.

His introductory remarks will probably be released early on the Fed’s website – you’ll probably be able to read them here if you’re interested. Don’t expect any shocking revelations in the prepared statement, however. Most of the interesting stuff (if any) comes out in the Q&A. You can also watch the full thing online if you fancy – just go to the Committee’s website. I admit I’d never have the patience to watch the whole spectacle.

The key thing will be what if anything he has to say about yesterday’s inflation figures. There was a significant revision of Fed rate expectations on the news. Will he push back against this? 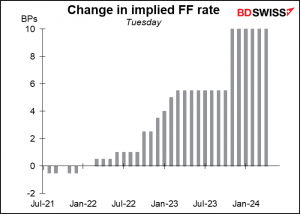 Then overnight there’s a lot of important data.

Australia employment is expected to be up only a small 20k. 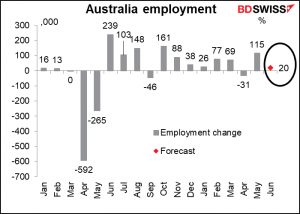 Meanwhile, the unemployment rate and the participation rate are expected to be unchanged. So net net, not much further progress on the labor front. The figures therefore might be negative for AUD. 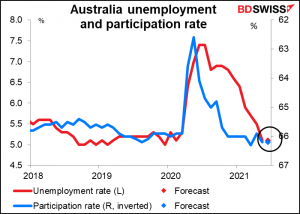 Having said that, Australia is one of the few places where the number of jobs is now higher than it was before the pandemic began. 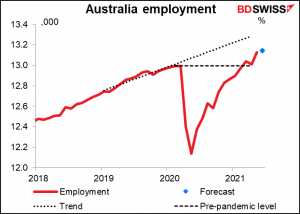 Nonetheless, the RBA does want to see further progress on the labor front, with a focus on wage growth. The forward guidance in their last statement read:

The Board remains committed to maintaining highly supportive monetary conditions to support a return to full employment in Australia and inflation consistent with the target. It will not increase the cash rate until actual inflation is sustainably within the 2 to 3 per cent target range. The Bank’s central scenario for the economy is that this condition will not be met before 2024. Meeting it will require the labour market to be tight enough to generate wages growth that is materially higher than it is currently (emphasis added).

So far wages aren’t skyrocketing by any means. The recent +0.6% qoq growth rate is well within the normal range for Australia. The wages data (due out Aug. 18) might be more important at this point than the employment data. 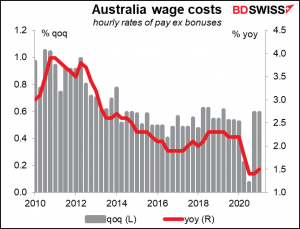 Then comes a flurry of China indicatorrs: the usual trio of retail sales, industrial production, and fixed asset investment, this time with the crucial GDP figure. It’s expected to come in at around 1.0% qoq or 8.0% yoy, which is returning to normal after over a year of pandemic-induced distortions. 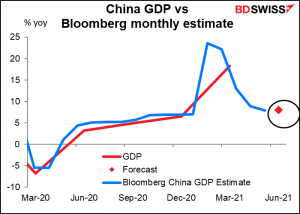 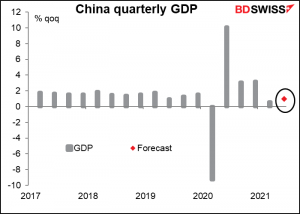 As for the other three, they’re only available in yoy changes, which are still distorted by the pandemic. It will be August or so before we start to get more reasonable figures. 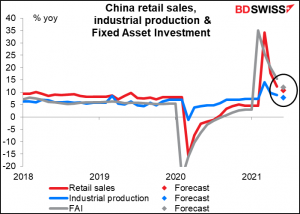 Japan’s tertiary sector index is expected to fall for the second consecutive month as the worsening virus situation forced State of Emergency declarations in several regions. 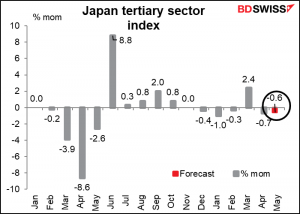 Japan’s service sector is lagging behind the rest of the developed world. This will keep prices subdued and help to keep the Bank of Japan in easing mode indefinitely, one more reason why I expect the yen to be fundamentally weak over the medium term. 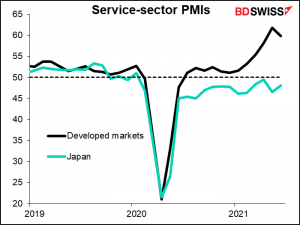 UK employment is likely to be somewhat encouraging. Jobs are forecast to increase for the third consecutive month, albeit not at as high a pace as in the previous month. The unemployment rate is expected to be unchanged at 4.7%, but that may be because of some technical changes to the Labour Force Survey that will be implemented from this month which will push the unemployment rate up by 10 to 20 bps. 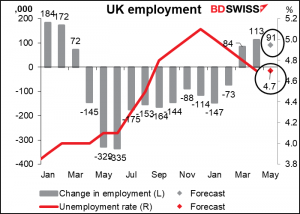 The pace of wage increases is expected to rise further, thanks to wage increases in industries where there’s a lot of social contact, plus the return of furloughed workers to work.

Added to Tuesday’s higher-than-expected inflation data, the figures could be the basis for further optimism at the Aug. 5th Bank of England meeting. That would be positive for the pound. 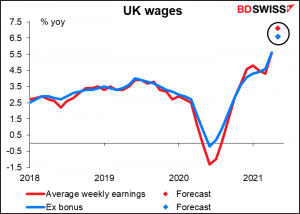 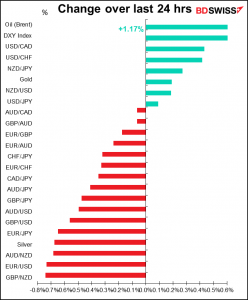